Elizabeth Dole hammers her Senate opponent for his ties to Wall Street. But she still won't answer questions about a political money scandal in her own past. 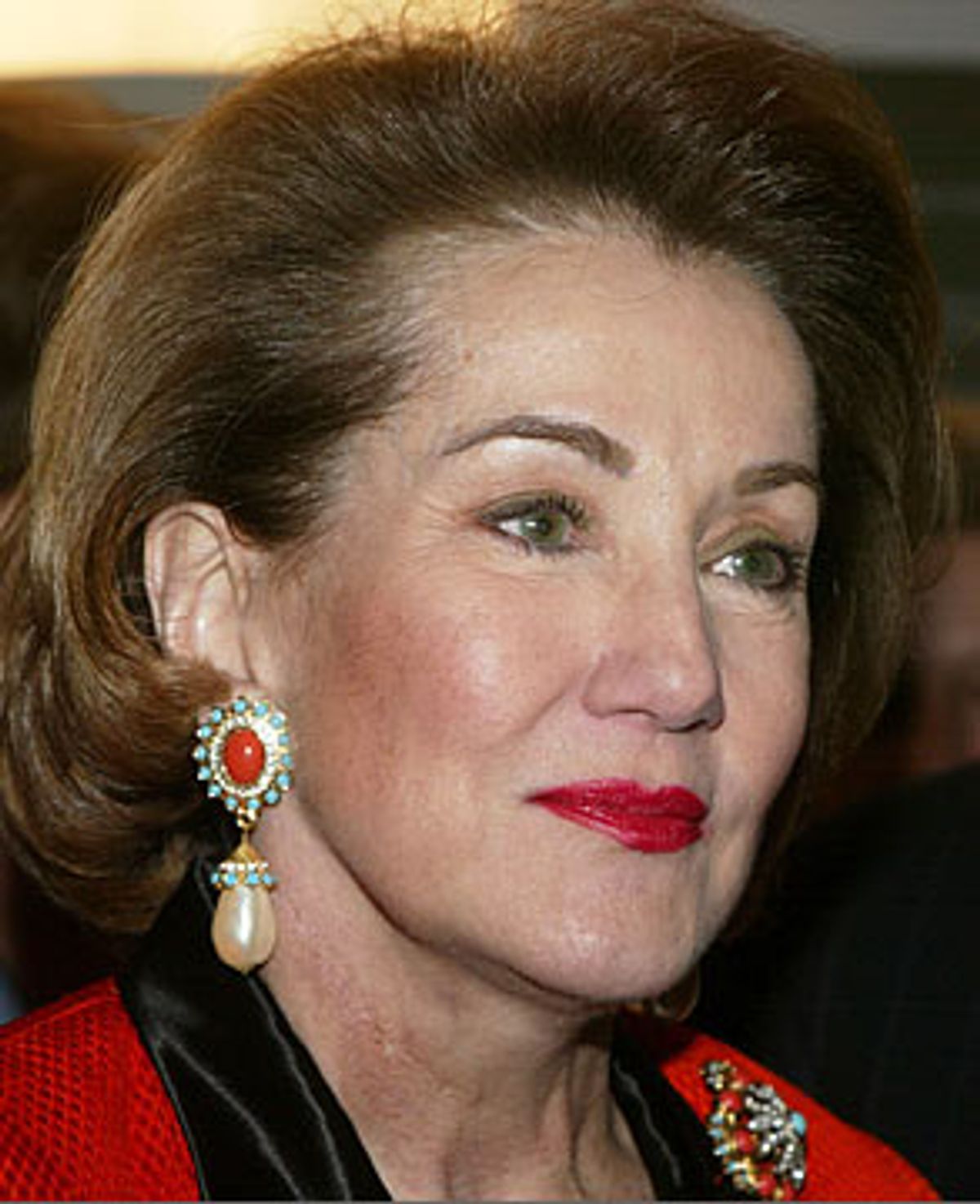 In the North Carolina race for Jesse Helms' seat in the U.S. Senate, Erskine Bowles, the Democrat, has been frequently singled out for his ties to corporate America. The state Republican Party even attacked Bowles' wife, Crandall, for running a company that recently moved textile jobs to Mexico.

Oddly absent, though, has been any discussion of his opponent, Republican Elizabeth Dole, and her business investments that once led to investigations by the Office of Government Ethics, the Securities and Exchange Commission, the Federal Elections Commission and the House Small Business Committee.

Stories about Dole's business dealings first surfaced when her husband, Bob Dole, then a senator from Kansas, ran for president in 1988. At the time, much was made of the investments of her blind trust, which was managed by David Owen, Bob Dole's confidant for more than 20 years and his campaign finance chairman in 1988. Owen, the former lieutenant governor of Kansas, was eventually forced to resign from the campaign and spent six months in jail for unrelated tax fraud charges -- angrily claiming that he had been abandoned by the Doles for political expediency.

The Bowles campaign, however, has not raised any of Dole's past business dealings as a campaign issue. Sources close to the campaign said they feared the story was too complex to grab voters' attention. In addition, Bowles, a partner in the New York firm Forstmann Little, which is being sued by the state of Connecticut over losses to its pension fund, has probably not been eager to embrace corporate accountability as a campaign issue. When asked about Dole's financial history, Bowles spokeswoman Susan Lagana offered only, "It certainly seems like there are a lot of questions that have gone unanswered since at least 1988. The people of North Carolina deserve honest answers about Elizabeth Dole's action in Kansas." When contacted by Salon, Dole's campaign refused to comment on any association she had had with Owen.

Owen, though, gave a round of interviews blasting the Doles after his release from prison in 1994. But since being pardoned by President Clinton in 2001 and rebuilding his life as an investment banker in Kansas, he has been reluctant to speak to the media. Owen did not return repeated calls from Salon seeking comment for this story.

Owen's most scrutinized deal for the Doles involved the Dole trust's ownership of a Kansas office building and the partnership with John Palmer, a former Senate aide to Bob Dole. After a yearlong lobbying effort by Bob Dole, Palmer's company, EDP Enterprises, secured a $26 million contract from the Small Business Administration to provide food services to Army mess halls in Missouri. EDP was located in the same building as Owen's Eagle Distributors, and the two companies shared some personnel and legal counsel, according to the 1996 book "Senator for Sale," written by former Dole aide Stanley Hilton.

Palmer turned around and used some of that money to buy in to an office building owned by the Dole trust, which Owen managed. EDP purchased half of the Dole-owned building for $804,000, earning the trust a $63,000 profit on its initial investment. Palmer's decision to purchase half of the building came just two days before increases in the capital gains tax, allowing Elizabeth Dole to maximize her profit. The deal was arranged by Owen, who personally made a $139,000 commission from the deal.

Dole's trust even lent Palmer $279,000 to help push the deal through before the tax deadline. That money was eventually paid back to the trust at 11 percent interest, netting the trust an additional $31,000.

An investigation into the EDP deal in 1988 by the House Small Business Committee raised concerns that Owen, who is white, was simply using EDP as a front to get access to money set aside for minority businesses. At the time, the Bush campaign and some congressional Democrats suggested that Bob Dole used his influence to get government financing for Palmer so that he in turn could help the Doles by buying into their building.

The Doles, though, maintained that it was a blind trust and that they were unaware of Owen's financial deals. An investigation by the House committee never proved that either of the Doles knew about the building. Owen, however, says they did.

"That trust had eyes," Hilton said in an interview with Salon. "And those eyes were David Owen." The congressional committees never found any evidence of wrongdoing on the Doles' part, however.

In a 1996 interview with the Associated Press, Owen said Bob Dole knew about some of the investments that Owen was making for the trust. Owen said that Bob Dole "absolutely" knew about the office building the trust had purchased and that Dole once asked Owen about the building in 1988.

The building sale was one of the many deals Owen handled for the Doles. While managing more than $1 million of Elizabeth Dole's money, Owen also served as the general finance chairman of Bob Dole's campaign. Owen resigned from the campaign in January 1988, amid allegations that he had mishandled a dog-track deal involving the son of Alabama football coach Paul "Bear" Bryant. Owen eventually served six months in prison on fraud charges surrounding the deal.

When Owen resigned from the campaign, the media briefly focused on his management of Elizabeth Dole's blind trust. The issue had first been raised by Bob Dole's GOP primary rival, then-Vice President George H. W. Bush. The cloud of scandal kicked up by the Bush campaign led to Bob Dole's confronting the vice president on the Senate floor, with Dole demanding that Bush apologize to Dole's wife.

In a 1996 interview with the New Yorker, Owen says he was thrown overboard by Bob Dole for political expediency. "I was made a scapegoat for Dole," he said. "He decided to wash his hands totally of me so that any problems that arose were mine, not his. He totally deflected questions about himself by focusing attention on me ... He betrayed me."

Other deals involving Owen's handling of the Dole finances raised eyebrows. One involves an Owen-backed company called Golfun Productions, which hoped to produce a TV show that would feature celebrities offering golf tips. The company was a bust, and investors -- except Elizabeth Dole -- lost money. She gave the company a $250,000 personal loan in the early part of 1984. By the end of the year, with financial disaster looming, Owen arranged for her to be paid back, with interest. While others lost thousands, Dole turned a profit, recouping all of her principal, plus $71,000 in interest.

Owen also helped Dole's trust profit from legislation that her husband was instrumental in passing. As the Senate moved in the mid-1980s to crack down on tax-shelter loopholes, Owen moved Dole's money into new, safe investments. He invested it in a company called AmVestors Financial Corporation, whose board Owen served on, which sold insurance policies and annuities that would be exempt from the new Senate legislation. With Sen. Bob Dole working on tax legislation on Capitol Hill, Elizabeth Dole went to Topeka, Kan., to talk to Owen about how to invest her money with the arrival of the new law, Owen told the New Yorker.

When the law passed, AmVestors stock soared as its assets more than quadrupled. Investors were eager to find tax shelters that survived the 1986 tax-reform law, and AmVestors was able to supply those shelters. Owen knew this, and anticipating a boom in AmVestors business, purchased somewhere between $5,000 and $15,000 of AmVestors stock on Elizabeth Dole's behalf. Owen sold the stock the following year for a profit, according to tax disclosure forms. By employing Owen, the Dole confidant, as her financial manager, Elizabeth Dole had the help of a legislative insider who helped her profit from a loophole that was left untouched in a law her husband helped create.

"[Bob] Dole was a member of the finance committee, and railing against tax shelters, and yet his confidant is finding ways for his wife to take advantage of tax shelters," said Bill Allison, managing editor of the Center for Public Integrity. "And Owen was in a position to know the new loopholes better than even a tax professional, because of his association with Bob Dole. It just shows that there are two tax laws in this country, one for the powerful and wealthy, and one for everybody else."

As Owen told the New Yorker: "Everyone understood what was going on." The question is, why aren't North Carolina Democrats talking about it?