Mike Leigh returns to the council flats of London -- and delivers a richly Dickensian masterpiece about working-class family life. 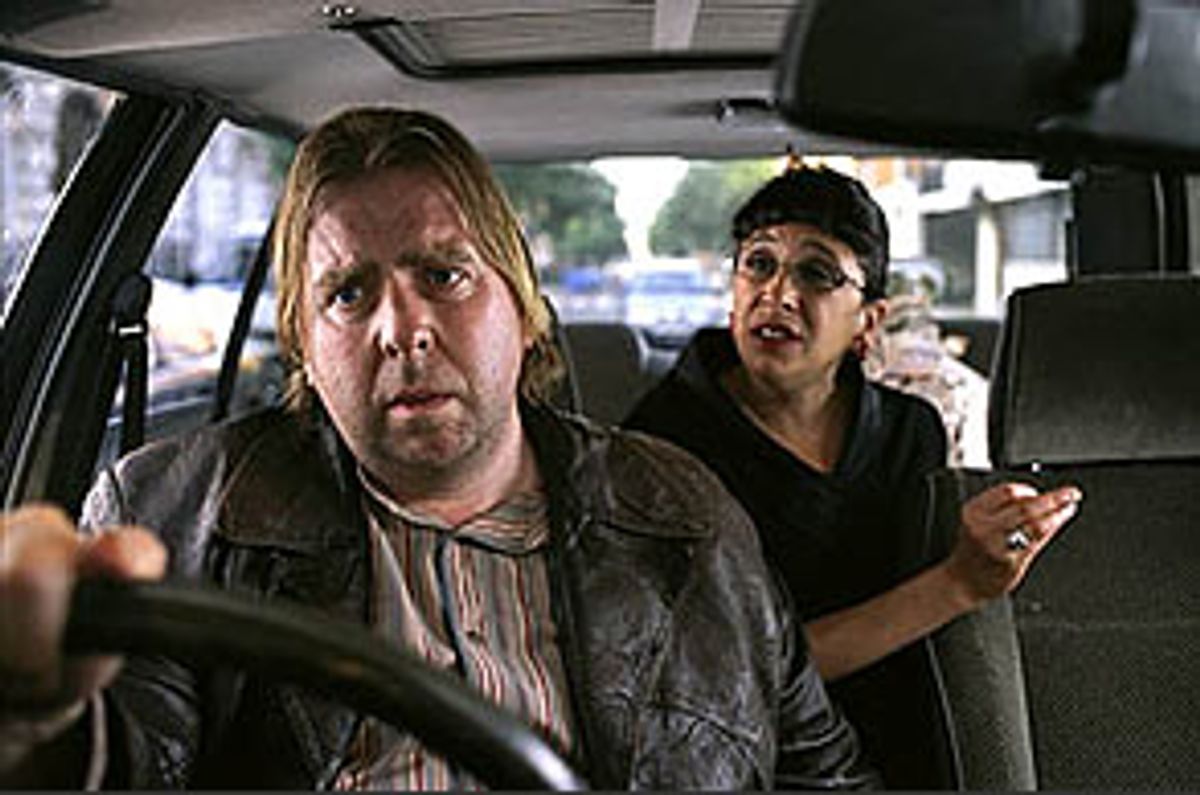 Mike Leigh must have the most deceptive style of any filmmaker now working. Like "Secrets and Lies," "Life Is Sweet" or "Meantime" before it, his new movie, "All or Nothing," can easily be mistaken for naturalism. Leigh and his actors are so attuned to the nuances of exchanges between husbands and wives or parents and children, and he can be so unsparing about the everyday cruelties and indignities his characters face, that you feel as if the camera were simply there to record what's going on.

But there's a powerful compassion, and even a sense of hope, at work in Leigh's movies. He never puts his characters under a microscope. The no-hopers who populate the movies of Ken Loach, Britain's premier social-realist filmmaker, finally feel of no interest to the director beyond their ability to advance his political points. Leigh puts the oddities and limitations of his characters right upfront. And yet as strange as they can seem at first, in Leigh's best movies -- and "All or Nothing" is one of his finest -- the people on-screen finally reach us with all barriers obliterated.

In his Village Voice review of "All or Nothing," J. Hoberman calls Leigh the most Dickensian of filmmakers, and I think that's pretty close to the mark. It's not just Leigh's interest in how these people are affected by social institutions; it's his willingness to indulge in caricature (with varying degrees of success) and, I think, the fact that the emotions in Leigh's movies can be overwhelming, the way they are in Dickens.

Leigh made his reputation with TV movies and, with exceptions like "Topsy-Turvy" (a movie I'm nearly alone in thinking a disaster), he has never broadened his scale beyond minutely observed character study. It's the opposite of the sprawl and scale you associate with Dickens. There are moments in Leigh's movies, though, when the emotional impact is so big and so strong that he earns the comparison to Dickens (and in some way I can't pinpoint, to D.W. Griffith, who was Dickens' truest heir in the movies).

The action of "All or Nothing" is set in and around a block of London council flats, a scrubby, ugly place where the residents are trying to find some measure of comfort and grace amid the grind of their lives. The focus of the movie is Phil (Timothy Spall), a minicab driver eking out a miserable living ferrying people around London, and his partner, Penny (Lesley Manville), a supermarket cashier whose mousy demeanor hides the gnawing worry of someone living with the perpetual worry of disaster.

If you've seen Manville as the horrendous yuppie snob of Leigh's "High Hopes" or as the foolish, lovestruck wife of diplomat Kenneth Branagh in Clare Peploe's comedy "High Season," she's almost unrecognizable here. Scrubbed of makeup, with her blunt-cut hair hanging in a utilitarian blob, she defines the word "careworn." Penny's timidity finds its outlet at home when she berates Phil for not making more of an effort at his job, and even more in the tight-lipped resentment of what she doesn't say to him.

Her most painful exchanges, though, are with her son Rory (James Corden), an obese bully who insults his mother at every turn and then, when she upbraids him, claims that he's constantly being picked on. Rory's favorite phrase is "fuck off," and Phil and Penny seem so knocked out by their lives that they suffer his abuse in silence. Rory has shut himself off completely from his family. At the dinner table he sits facing the television.

Phil and Penny also have a daughter, Rachel (Alison Garland), who at first seems inordinately shy or constantly beaten down by life. Watching Garland's exquisite, nearly silent performance, you slowly come to realize that Rachel's reserve, the way she walks through life with her eyes cast down, is a mark of strength and kindness. You see that kindness in her dealings with the residents of the old folks home where she works as a cleaner, or in the way she gives her loose change to Phil when he's scraping the barrel to pay the rental on his minicab. The shot of Rachel tucked up in her bed reading a novel is one of the movie's few images of peace. And it's a measure of how subtly Leigh can achieve his effects, casting this simple, ordinary act as a small oasis of comfort and refuge.

Other characters intersect with Phil and Penny's family, notably Maureen (the wonderful Ruth Sheen), a cashier who works with Penny and lives with her daughter in the same block of flats. Sheen -- she was half of the veteran leftist couple in Leigh's "High Hopes" -- has one of the great faces in the movies: long, with no chin, and seemingly drooping. But Maureen radiates an unfailing common sense and good humor, although not a false cheery humor. She has no illusions about life; her grace comes from her capability to meet it head-on. Sheen acts on the movie like a tonic, dispelling the sense of futility that sometimes threatens to overtake it.

A lot of the reviews of "All of Nothing," both here and in Britain -- where the film opened a few weeks ago -- have focused on the drabness and dourness of the film, the way Leigh doesn't spare his characters any misery. He doesn't help matters by using a score by Andrew Dickson, heavy on a rather monotonous cello, that underlines the sadness of the characters' lives. The movie doesn't need that kind of emphasis, and Dickson's score makes the film, at times, seem gloomier than it is.

The other major fault here is that some of the supporting characters, particularly Carol, the hopeless drunk played by Marion Bailey, indulge Leigh's taste for caricature without being successful as characters. And surely any working-class London council housing would have blacks, Pakistanis and members of other ethnic groups who aren't visible here.

Leigh does show, however, what he can do with caricature in a scene between Phil and a French passenger (Kathryn Hunter). At first she seems like no more than a cultural stereotype, the snobby, comically arrogant Frog. But Leigh keeps cutting back to this pair finding an unlikely rapport, a few moments when Phil is not just a servant of the people he's driving around but is being noticed and talked to as a human being.

Spall, with his bulk and the face of an enormous basset hound (in fact, Phil's last name is Bassett), is an actor perfectly suited to caricature, as in his performance as the would-be restaurateur in "Life Is Sweet." But he can be a powerfully naturalistic and sympathetic actor as well. He was the only human being in Patrice Chéreau's "Intimacy," a more believable presence that that drab and self-important movie deserved. He does his finest work yet in "All or Nothing."

At times, Spall resembles a reserved Jackie Gleason. As he trudges silently through his job and family life, you may think of Gleason's character, the Poor Soul, a tribute to silent-film comics. There's none of the self-pity and bathos of the sad clown in Spall, however. He's one of those Leigh characters who is genuinely trying to do his best. When that French passenger asks him whether he loves his wife, the husky and hushed yes with which he answers suggests a man who feels things much more strongly and deeply than he can articulate.

Phil may be beaten down but he's not numb. His questions to his family about their day, and the little stories he tells them about his, are his desperate means of connecting. For much of the movie Spall conveys all this with just his huge, sad face. It's in the movie's penultimate scene, however, after disaster has struck the family and Phil lets go of everything he's kept bottled up inside, that the magnitude of Spall's performance becomes evident. Like the miraculous scene in "Life Is Sweet" where Alison Steadman blurts out her love for her daughter Jane Horrocks, and her frustration with the way her daughter has cut herself off, Spall's monologue to Manville's Penny is wrenching. (I watched it through tears.) It's a great, blubbery outpouring of emotion that is also a lifeline thrown to a distant shore. And, mercifully, someone grabs the other end.

Spall's magnificent monologue, and what follows, gives the lie to those who accuse Leigh of unremitting hopelessness -- and to those who have accused him of false optimism. There is a certain kind of bleakness that, no matter how faithfully it sticks to the hard facts of life, is its own kind of lie, a failure of nerve and a failure to imagine that there can be any beauty or tenderness in even the hardest lives. That beauty and tenderness breaks through in "All or Nothing," in Ruth Sheen's face as she sings "Don't It Make My Brown Eyes Blue" at a karaoke night, or in the perfect absurdist touch of Phil visiting a hospital proffering a bunch of bananas as a gift, or in the movie's final scene.

Leigh's daring here is that without once denying the hardscrabble lives of people on the economic fringes of Margaret Thatcher's ruinous legacy, he insists on the importance of those moments when people can connect and express their love for each other. If there's such a thing as life-affirming decency, Mike Leigh has it in bucket loads.