Salma Hayek rescues Frida Kahlo from the realms of myth with this romance about glamorous communists, cheating muralists and lesbian affairs. 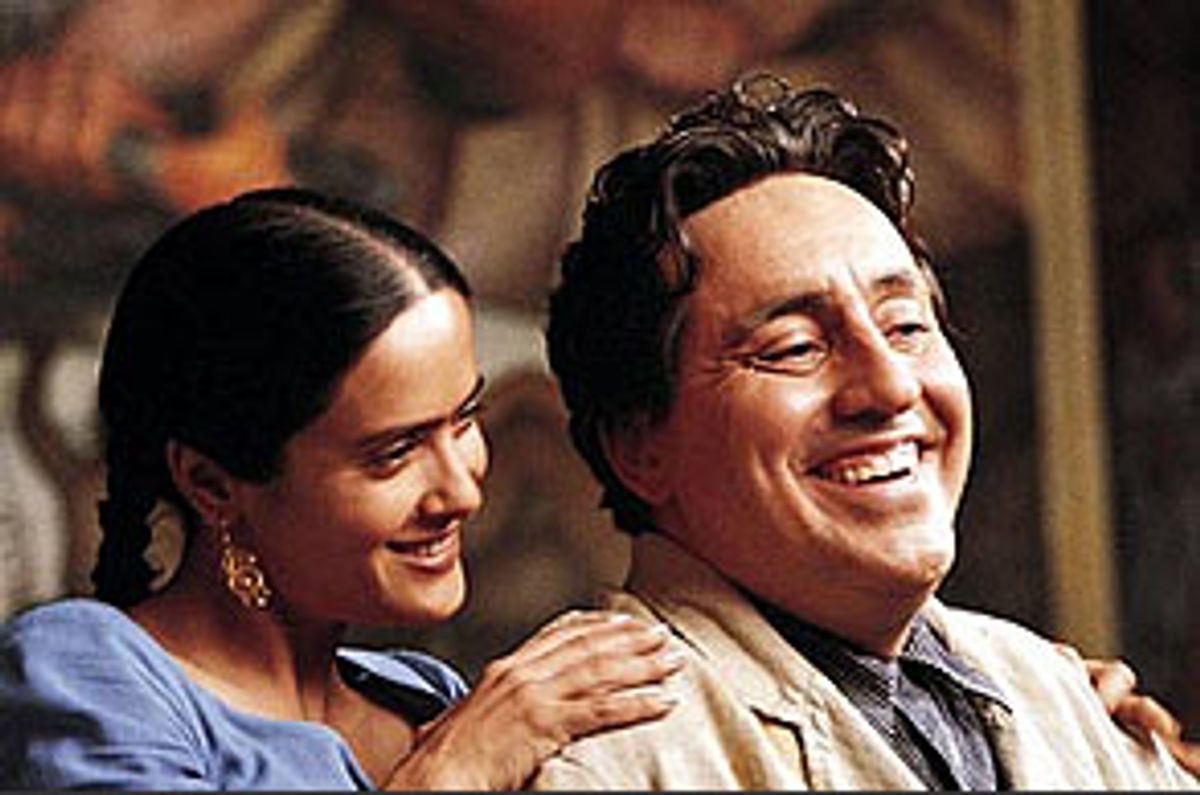 When you get down to it, icons are much less interesting than people. The Mexican artist Frida Kahlo, who died in 1954 at the age of 47, seemed fabulously interesting when Hayden Herrera's popular biography slipped onto the scene in the early '80s. At the time, few people in the United States had any idea who this fierce, funny, festively glamorous creature was. Multiculturalism was just beginning to burst from its pod, and here was this unknown painter from Mexico who may as well have dropped down from the Planet Unibrow for all we knew.

Kahlo's paintings -- bright, enticing, sometimes morbidly distressing -- sat squarely and comfortably between folk and fine art. (Refreshingly, Kahlo found no shame in the former -- in fact, she adored the art forms of her native country, and they inspired her.) The fact that she was a bisexual Communist, that she was constantly in pain because of a horrific bus accident in her youth, that she was married (in a rather modern way) to the philandering muralist Diego Rivera, upped her star quotient for women constantly on patrol for new kinds of role models. Her life became a feminist text; then came the calendars and the refrigerator magnets and the attention of celebrity collectors. It was downhill all the way.

But Julie Taymor's movie version of Kahlo's life, "Frida," makes the artist seem more like a human being and less like a craft-fair novelty than she has in years. Like Kahlo herself, the picture is imperious and colorful; the opening sequence shows us the courtyard outside of Kahlo's home, a clatter of sun-warmed royal blues, marigold oranges and brick reds, a place where monkeys and fawn-colored dogs scamper like living decorations. It doesn't seem like a real-life courtyard, but like one imagined by an artist, its colors intensified a few notches beyond reality. It seems to be a trick on Taymor's part to plant us inside Kahlo's mind, to start us out by making us see what she sees in precisely the same way she sees it, and it's an effective one. Instead of lengthening the distance between us ordinary schmoes and the exalted artist, Taymor foreshortens it. It's a clever bit of Marxist artistry.

"Frida" is very much a Taymor movie, though it's much more disciplined and less disjointedly, nonsensically wacky than her strange debut, "Titus." "Frida" is graced with a number of marvelous Taymor touches -- at times it's like a moving pop-up book, similar to the kind of theater work she's done in productions like "The Lion King." Paintings come to life, and conversely, human beings flatten and retreat into the surfaces of paintings; a New York sojourn taken by Diego and Frida turns into a mechanical collage postcard, complete with Diego cast as a burly King Kong atop the Empire State Building; and in a brilliant and unsettling dream sequence animated by the Brothers Quay, chattering Day of the Dead figures minister to the injured Kahlo -- fleshy red live-action tongues flutter in their puppet mouths.

But those are flourishes, not burdensome trappings. Colorful as it is, "Frida" also has something of a somber, stripped-down quality. That may be because Taymor, as well as her lead actress, Salma Hayek (who also co-produced the movie, after fighting for years to get it made), are much more interested in Kahlo the person, and artist, than in Kahlo the postage stamp. No one, least of all Taymor or Hayek, is denying Kahlo's status as a pop phenomenon. But both seem to have little interest in the "Women Who Run With Wolves" school of filmmaking or acting; they present Kahlo as more of a fascinating weirdo than a role model for those types of people who used to be called, euphemistically, Difficult Women. (You know the type -- women who sincerely believed their PMS crankiness was a form of brilliant performance art.)

If anything, Hayek and Taymor want to rescue Kahlo from that tiny ironclad womb of a prison. And although "Frida" moves stiffly and rather slowly in places, for the most part it breathes with empathy. Hayek is perfectly cast in terms of her looks -- she even manages to make the bright, traditional Mexican costumes favored by Kahlo look like a reasonably normal, if eccentric, form of dress, instead of gimmicky artist get-ups. Hayek has often been a smart, lively presence as a comic actress, and a fairly unsung one. She doesn't make the mistake of getting too actressy in "Frida"; she knows her strong suit is her ability to toss off a line like an old-time I-don't-care girl, and those instincts inform even her most serious dramatic scenes, keeping them believable and real. It's a performance that smolders from the inside.

The script, adapted by Clancy Sigal, Diane Lake, Gregory Nava and Anna Thomas from Herrera's biography, leaves no significant stone of the Kahlo legend unturned. The movie opens in Mexico City in 1922, showing us the young Frida as a brainy schoolgirl dazzled by lefty political ideas she hasn't really begun to sort out yet. As a young teenager Kahlo was involved in a trolley accident in which her vagina was pierced by a steel rod, leaving her in intense pain for the rest of her life. Taymor stages the accident as both poetic and horrifying, a visual symphony of fluttering shattered glass -- it's like a re-creation of the way Kahlo might have pictured it in her own mind after the fact.

Kahlo's lesbian affairs are addressed glancingly but significantly, starting with the sexy drunken tango she performs with Ashley Judd as photographer Tina Modotti. (Judd shouldn't work as Modotti, but there's something about her mighty-mite Hollywood glamour that translates perfectly to at least one angle of the character -- in the popular lore, at least, the smart set of '30s boho Communists so often come off as Hollywood stars in their own minds.) Similarly, the movie takes a quick spin around Kahlo's affair with Leon Trotsky (played, in a stroke of weird brilliance, by Geoffrey Rush). Kahlo slept with plenty of people in her lifetime, and "Frida" touches down on them lightly, presenting them as a series of pointillist dots and dashes.

But the movie's deepest reserves of feelings are poured into the relationship between Rivera (played, in a terrific bit of casting, by Alfred Molina) and Kahlo. In fact, "Frida," for all the sympathy and care shown to its subject, works even better as a romance than as a biopic.

"Frida" is a romance for the deeply romantic, which means that some people will certainly view it as cynical. Kahlo and Rivera were married, divorced and remarried; both had plenty of other partners, even during the years they were wed. But their partnership, fraught as it sometimes was with anger and jealousy, was also a rare model of loving friendship. Rivera did some truly lousy stuff in real life -- most notably sleeping with Frida's own sister -- and the movie addresses his sliminess squarely. But it also shows how adamantly Rivera championed Kahlo's work without ever condescending to her. One minute, Rivera would be fiddling with the melons of this or that model; the next, he'd be informing anyone within earshot that his wife was superior to him as a painter.

Molina plays Rivera as a rotund, sexy bear -- though you can't quite put your finger on why, you understand exactly why he'd have no trouble scoring babes. But his untethered sexuality exists as something apart from his devotion to Frida; especially as Molina plays him, it's easy to understand Frida's love for him -- this is anything but a study in victimology.

Molina's Rivera is a big character, literally and figuratively, but the diminutive Hayek, with her robust cojones, matches him inch for inch. (She takes an almost evil delight in poking fun at his girth by calling him "panzone.") In an early scene, the two lie draped across the bed after making love, and he informs her that they ought to get married. She protests, asserting that he doesn't believe in it as an institution. (He tells her that of course he does -- he's already had two wives!)

The conversation shifts into a discussion of the line between loyalty and sexual fidelity, and both Frida and Rivera recognize that the two sometimes can't coexist -- or, more specifically, that maybe they don't have to, a possibility that's even more terrifying, if also a little thrilling. "Frida" doesn't sidestep any of the pain that must have flourished within Kahlo and Rivera's unusual partnership. But their regard for one another -- if you consider regard as something separate but connected to romantic love -- feels pure and real.

"Frida" is a movie about a marriage between equals -- one an outsize painter who painted on some pretty outsize walls, the other an artist who worked on a much smaller scale but who, as Rivera himself put it, painted expansively, from the inside out. "Frida" makes a home for the two of them, a love nest in which the fur often flies but also, paradoxically, keeps the place warm. It's a cottage just big enough for two very big, yet very human, legends.