94,000 people on a voter "purge" list -- half of them African-American -- continue to be banned from voting in Florida, even though the state knows the list is wildly inaccurate. 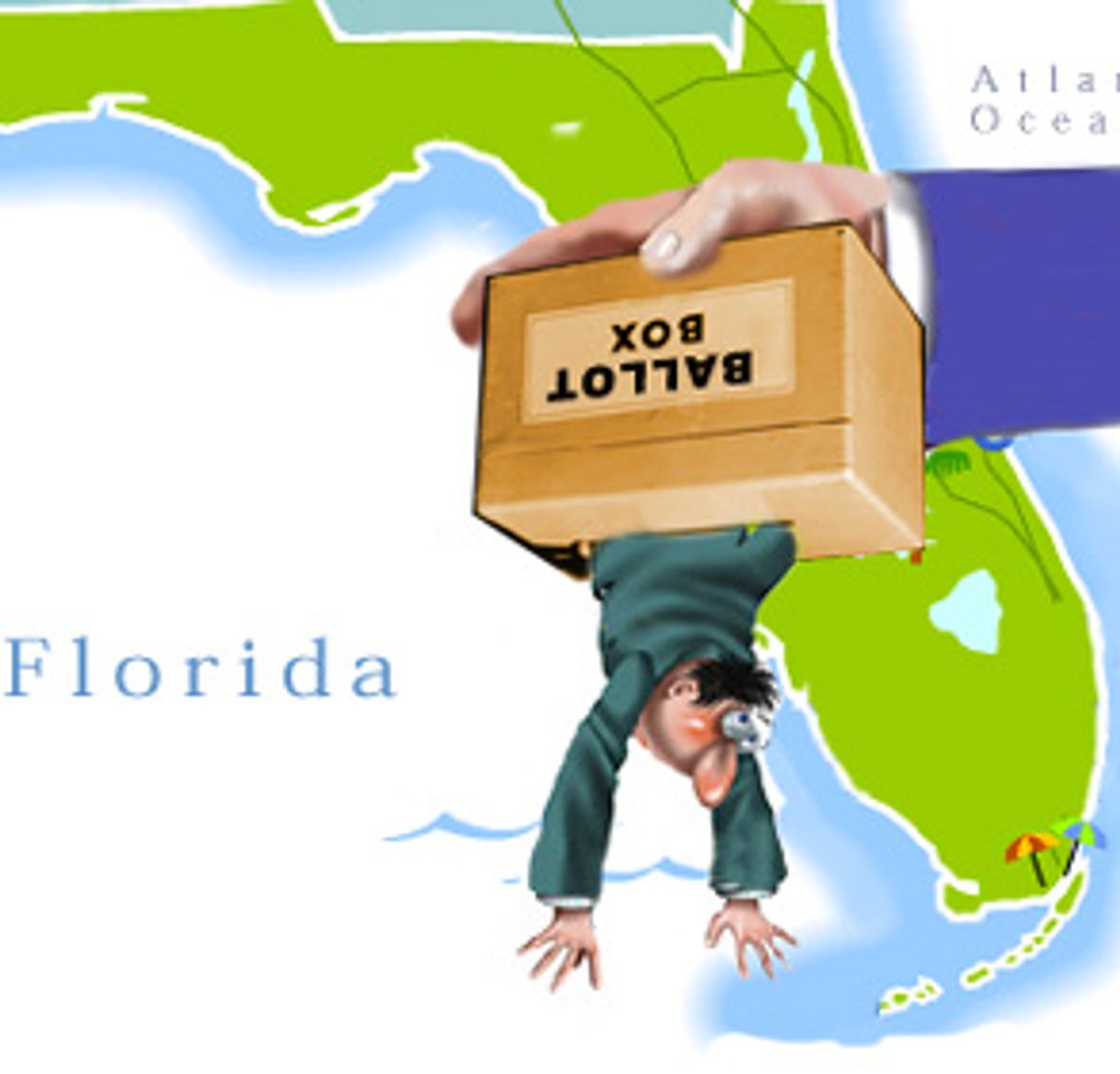 In December 2000, we reported that Florida's use of a faulty and politically questionable list of felons and dead people "scrubbed" from voter rolls -- half of them African-Americans -- may have cost Al Gore the 537-vote margin of victory claimed by George W. Bush in Florida.

Fast-forward two years. There's another close race in Florida. This time, younger brother Jeb is fighting to fend off a challenge from Bill McBride for the governor's race. The Nov. 5 face-off could again come down to thousands, if not hundreds, of votes.

And even though the list has been widely condemned -- the company that created it admits probable errors -- the same voter scrub list, with more than 94,000 names on it, is still in operation in Florida. Moreover, DBT Online, which generated the disastrously flawed list, reports that if it followed strict criteria to eliminate those errors, roughly 3,000 names would remain -- and a whopping 91,000 people would have their voting rights restored.

Eventually the list will be fixed, state officials have promised, in accordance with a settlement with the NAACP in its civil rights suit against Florida following the 2000 election. But not until the beginning of next year -- and after Jeb Bush's reelection bid is long over.

Florida is the only state to have paid a private company to "cleanse" voter rolls. The state signed a $4 million contract with DBT in 1998 (since 1999 a division of ChoicePoint of Atlanta) to create the scrub list, called the central voter file, which was mandated by a 1998 state voter-fraud law. That followed a tumultuous year that saw Miami's mayor removed after an election in which ballots were cast in the names of dead people. The voter-fraud law required all 67 counties to purge duplicate registrations and deceased voters from voter registries, in addition to removing felons, many of whom, but not all, are barred from voting in Florida.

DBT was instructed to list all voters whose names, birth dates, genders and races closely (but not exactly) matched those of ex-felons throughout the United States. But those matches were purposefully broad -- and imprecise.

During congressional hearings in April 2001, ChoicePoint vice president James Lee testified that the company had warned Florida election officials that the results would not be completely accurate. "DBT told state officials that the rules for creating this list would mean a significant number of people who weren't dead, who weren't registered in [in a Florida county], and who were not convicted felons would be included on the list," Lee said, adding that while "DBT made a lot of suggestions to the state on ways to reduce the number of eligible voters on that list," he quoted a Florida official who told them that they "want[ed] to capture more names that possibly aren't matches" and let the county supervisors determine if they were the right person or not.

Since that experience, ChoicePoint has gone out of the business of scrubbing lists. Lee said that "although we had been approached by other states to perform similar work, ChoicePoint has declined to perform voter registration for other states" because "when comes to performing work which may impact a person's right to vote, we are not confident that any of the methods that are used today will guarantee that the legal voters will not be wrongfully denied the right to vote."

Florida, however, seems to have decided to keep using those methods. Even when they're laughably inaccurate.

The state's list, most of which has been obtained and reviewed by Salon, contains such alleged criminals as Thomas Cooper, whose inclusion on the list represents either the dawning of a "Minority Report"-era of predicting criminal behavior -- or a glaring error. According to the list, Cooper is listed as a felon convicted on Jan. 30, 2007. In all, the list includes more than 400 people whose crimes were apparently committed in the future. More than 8,000 on the list have no conviction date at all. And eight, remarkably, appear to have been convicted before they were even born.

In 1998, elections officials with the secretary of state's office secretly directed DBT to use "fuzzy" matches of first names such as John, Johnny and Joan. As a result, voter Johnny Little of Leon County was not allowed to vote in 2000, because of a crime committed by one Johnnie Little of "locale unknown." In this case, the legal names did not match, but the two Littles' birth date and race (both are black) did. Johnny Little was tagged for removal from voter rolls. Also, the state, over the objections of DBT, also ordered the company to ignore suffixes such as "Jr." and "II," and mismatches of middle initials.

As part of the NAACP's suit against Florida, ChoicePoint agreed to review all the scrub lists. The company's report, dated Aug. 19, 2002, indicates that of the 94,000 names on the lists, only 3,000 match the nine key criteria (including social security number) that experts -- including DBTs senior vice president, George Bruder -- have stated is necessary to avoid misidentification.

Even before the 2000 election, some county election officials, interviewed by Salon two years ago, had disobeyed the order of the secretary of state's office and disregarded the lists, deciding they were faulty. That included Madison County's election supervisor, Linda Howell, who found her own name erroneously among the "felons."

But many others did use the list -- and are likely to use it this year as well, because the state has not instructed them otherwise.

So what's the delay in yanking the faulty lists? Salon asked former Secretary of State Katherine Harris, who is also a congressional candidate this year. But calls to her attorney -- the ironically named John W. Little III, of Palm Beach -- went unreturned. Calls to the Florida Department of Elections were also not returned.

The racial bent of the scrub list  and its particular bias against Democrats -- was a foreseeable result of the purge methodology. African-Americans account for approximately 46 percent of felony convictions in the United States, so it's no surprise that ChoicePoint's report for the NAACP on its scrub lists found that less than half of those on the Florida list are identified as white. (The Voting Rights Act of 1965 requires Florida to ask voters to state their race on registration forms.)

Florida's black voters are expected to cast ballots by at least 4-1 against Jeb Bush on Nov. 5, according to a recent St. Petersburg Times poll. And a University of Minnesota study indicates that nine of 10 ex-cons, on leaving jail, vote Democratic, no matter their race.

Ralph Neas, president of People for the American Way Foundation, which represented the NAACP in its suit, is disturbed by the state's foot-dragging. "They've known about the flaws in the list for at least two years, yet they come up with every excuse for not getting these names back on." Florida's slow efforts contrast markedly with the initial rush to purge those voters, accomplished in a matter of weeks. That first cleansing of the voter rolls occurred in 1998 under Harris' predecessor as secretary of state, Republican Sandra Mortham. At the time, Mortham overruled the objections of county elections officials in order to rush the purge's completion in a matter of weeks, just in time for Jeb Bush's first successful race for governor.

While some on the list were never scrubbed, tens of thousands of other citizens not on the purge list nevertheless lost their vote. They were wrongly denied the right to register. A directive from Gov. Jeb Bush's office dated Sept. 18, 2000, six weeks before the presidential election, ordered county officials to deny the vote to those convicted of felonies in other states. Two court rulings prior to the election directed the secretary of state to cease denying the civil rights of ex-cons who had relocated to Florida. Bush's clemency office corrected this error, affecting at least 40,000 citizens, but only on Feb. 23, 2001, after the presidential election.

The DBT purge list includes 2,800 such out-of-state felons whom Harris and Roberts, in the settlement with the NAACP, acknowledge should never have been purged.

That failure to restore those voters' rights in time for the governor's race especially troubles Larry Ottinger, co-counsel for the NAACP. "We should never have had to litigate this. They've admitted their error. There's simply no excuse for not returning this group of 2,800 to the rolls right now." The NAACP has been told that the state is waiting for reports from eight states to determine if any of these persons are still in jail or serving probationary sentences.

Florida paid DBT $4.3 million over three years to help identify felons illegally registered to vote, replacing a company that had charged the state only $5,700 per year for this work. DBT was chosen because the giant database operator, which aids the FBI on manhunts, offered to verify the accuracy of the list using several of its 1,200 databases, including change-of-address and driver's license records. DBT was also paid to verify the data by telephone calls, an arduous, costly, but necessary task where civil rights are involved.

State records show DBT was paid the millions to conduct the verification work. But, with the state's permission, DBT skipped those costly cross-checks. Last February, when asked to explain why DBT was paid for verification work not done, Florida Elections Division chief Clayton Roberts ended an agreed-upon interview with this reporter, locked himself in his office, and called in state troopers to remove this reporter from the Florida capitol building in Tallahassee.

This September, Roberts also signed a settlement with the NAACP, agreeing to reform the purge list. Roberts' explanation for why the list has not been dumped? He's not returning phone calls, either.