Guns, lies and the Internet in South Carolina

Field & Stream's Web site was associated with a voter's guide accusing a Democratic Senate candidate of being anti-gun. One problem: He's a member of the NRA. 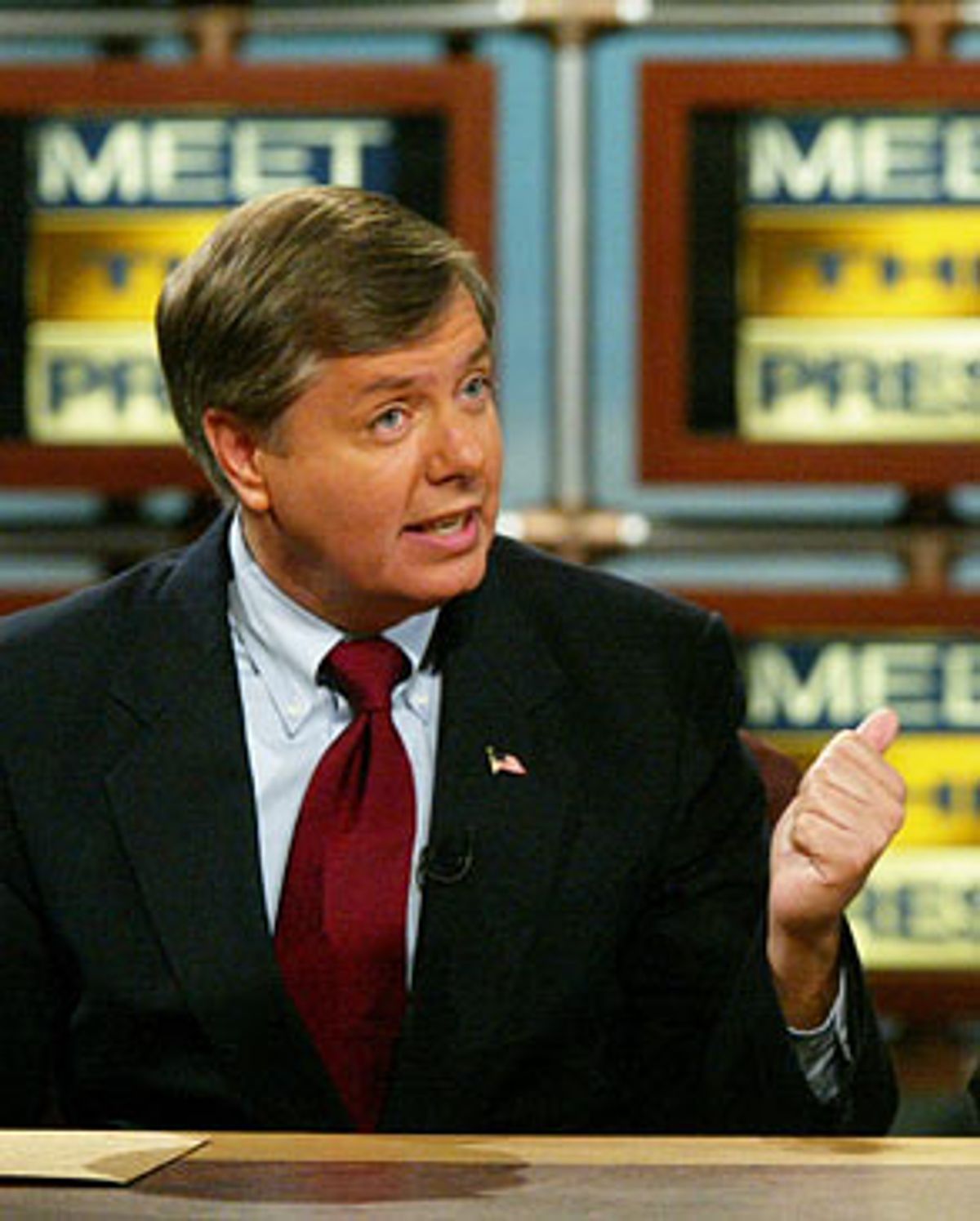 In South Carolina, calling a politician anti-gun is about as lowdown and dirty a smear as one can hurl. So when voters began receiving "voter education pamphlets" last month attacking a Senate candidate for not caring about the state's "hunting heritage," they could be expected to take the charge seriously. Especially when the attack came with an affiliation to the Web site of Field & Stream, a popular hunting-and-fishing magazine owned by the nation's biggest media corporation, AOL Time Warner.

Representatives of Field & Stream now call this a mistake, and the Web site has been hastily reorganized in recent days. But even worse, the charge leveled by the publisher of the pamphlets, the Hunting and Shooting Sports Heritage Fund, turns out to be false. Not only does Alex Sanders, the Democrat running for Strom Thurmond's Senate seat, say he's a member of the NRA, but his wife is also a former South Carolina skeet-shooting champion.

The HSSH Fund is the campaign arm of a gun-industry trade group called the National Shooting Sports Foundation. The pamphlets take an expectedly dim view of candidates who question America's gun culture, and they suggest that Sanders is against gun rights, while Lindsey Graham, his Republican opponent, is the kind of fellow whose piece you'd have to pry from his cold dead hands.

"Some people will say anything to get elected," the pamphlet says. "Alex Sanders wants you to believe he supports your rights, but the record says otherwise. Alex Sanders couldn't care less about your gun rights and hunting heritage. His attitude not only threatens your rights, but also jeopardizes a sporting tradition that is worth 21,000 jobs and $78 million in tax revenues in South Carolina ... Why would Alex Sanders destroy these jobs and the hunting tradition that created them?"

The mailings point to the Web address fieldandstream.com/votersguide, which they name as the Hunting and Shooting Heritage Fund's Web site. But that page is in fact on the site of the outdoor sports magazine Field & Stream. And although the address makes it look like a part of the magazine, the page itself is actually a paid advertisement for the NSSF. At the top of the page run the words "Sponsored by NSSF."

Curious visitors could be excused for being confused as to what kind of editorial beast this site actually was. The content on the voter's guide site was a strange amalgam of editorial copy from Field & Stream, its sister magazine Outdoor Life, as well as advertorial copy from the gun group. It was, at the time of the mailings, difficult to determine the provenance of any one article. After inquiries from Salon, the magazine has since changed some of the pages on the site to make things clearer. But as Google's cache of the page shows, that was not originally the case: This old version of the main page, for example, features an in-house, bylined article from Outdoor Life as its lead feature, and it also links to several articles without bylines and to an apparent HSSF ad that is not labeled as an advertisement.)

The editorial confusion is one problem. The accuracy of the accusations is another. Sanders is a fan of guns. He owns guns. According to an official at his campaign office, Sanders recently made a television ad in which he and his wife, Zoe, are briefly shown shooting skeet; the ad was hurriedly pulled from the air when what the official called "the sniper crisis" hit Washington. Nothing Sanders has ever advocated would seem to indicate that he would like to destroy South Carolina's "hunting heritage" or the money and jobs associated with it.

To recap, then, this is the situation South Carolina voters faced: A pamphlet of questionable accuracy is sent out by a "special interest" group to voters in a close race. The group points to a Web page on the site of a nationally circulated hunting-and-fishing magazine. The page is filled with articles of the group's own creation, as well as articles from the magazine itself, none of which are clearly marked. A banner on the top says "Voter's Guide 2002." Some of those articles actually stump for the Republican candidate.

One doesn't have to be conspiratorial or even generally leery of dirty politics in South Carolina to ask: Are the magazine and the special-interest group somehow affiliated? Is the anti-Sanders voter's guide being put out by the magazine, or the interest group? Is the magazine, owned by the same company that owns such blandly in-the-middle news outlets as Time and CNN, actually suggesting that South Carolinians vote for Graham over Sanders by inaccurately portraying Sanders as a softie gun reformer -- or is just the interest group saying that? (Or are both of them saying that?) And if it is the magazine, was it intentional, or a foul-up?

Actually, say representatives of Field & Stream and Outdoor Life, the whole thing was a mistake -- the fault of a webmaster who inadvertently posted editorial copy onto an ad page.

"In our November issue," said Todd Smith, the editor of Outdoor Life, "we have our own voter guide that is strictly an Outdoor Life piece. By accident the woman who does our site grabbed some of our [voter's guide] and pasted it into this ad page." Robin Shallow, a spokeswoman for Time4Media, the Time Warner company that owns Outdoor Life and Field & Stream, said that after Salon notified the magazines of the possible error on the site, the two publications moved to fix things.

The confusion stemmed from there being "two separate voter guides," Smith explained. Outdoor Life's voter guide, produced by Frank Miniter, one of the magazine's editors, did not explicitly push for one candidate over another, Smith said. Instead, the magazine just looked at where the candidates stood on a variety of issues important to sportsmen -- "clean water, that type of thing," Smith said -- and presented those facts to the readers.

"We're not endorsing candidates," Smith said. "Our readers are too smart for that."

The guide was produced independently of the NSSF and every other group. "We have a very separate editorial and ad department," Miniter said. "There's a good wall there."

Outdoor Life's voter's guide, posted on the magazine's site, offers a more nuanced view of the South Carolina Senate race than the NSSF pamphlets: "Representative Lindsey Graham (R) is in a close race with Alex Sanders (D)," the guide says. "Graham is a member of the [Congressional Sportsmen's Caucus] and is pro-gun-rights. Sanders is not thought to be anti-gun but has received funds from the not-so-sportsmen-friendly Sierra Club."

The NSSF's voter's guide, in the form of an ad that appears on the Field & Stream site, is solely the NSSF's creation. "Those materials are created by an agency for us," Gary Mehalik, the group's vice president of communications, said. Mehalik also said he didn't think there was anything confusing about his group's copy appearing on FieldandStream.com -- the "sponsored by" logo, he said, made it clear that the text there wasn't the magazine's text. "That term 'sponsored by' for me is very specific," he said. "It's been established that the sponsor pays for placement of content. Our relationship with them is as an advertiser."

A South Carolina supporter of Sanders who alerted Salon to the pamphlet-Web site brouhaha, though, did not quite swallow the "It was a mix-up" explanation. The voter -- who declined to comment on the record, for fear, he said, of fanning the flames over Sander's stance on firearms -- said that the apparently tight relationship between AOL Time Warner and a gun group could not be so easily explained away.

Of most concern, he said, was the very fact that an advocacy group was using part of the Field & Stream site for its own copy. And it was made all the worse by the ad's inaccuracy.

How did the NSSF come to believe that Sanders didn't care about gun owner's rights?

Mehalik said that the group sent out questionnaires to candidates for office around the country. Graham, the Republican candidate, returned his questionnaire. Combined with Graham's other positions on gun reform -- in 1999, for example, he voted to decrease the waiting period for guns from three days to one -- the NSSF decided he would support South Carolina's "hunting heritage."

Sanders did not return the questionnaire. And Mehalik said that Sanders' "failure to answer questions that are important to sportsmen and sportswomen" indicated where he stood on gun issues -- he was against guns.

Did Mehalik know that Sanders is a member of the NRA? "The NRA does not disclose who are its members," Mehalik said, "so we have no way of verifying that."

Did Mehalik know that Sanders claimed to be a sportsman himself? "If he is, I wonder why there was no response to us, then," Mehalik said. "Sometimes people who have positions on controversial issues try to avoid answering questions that might scare away some votes."

But it would be hard to make the case that Sanders has tried to hide his position on guns. Because the South Carolina race will decide Strom Thurmond's successor, it has received much attention from the national media, and seemingly every story has mentioned Sander's stance on guns.

"Alex Sanders is no Ted Kennedy liberal," Leslie Stahl declared last week on "60 Minutes." "He's a member of the NRA and supports the president on Iraq."

And in a May New Yorker article posted on Sander's campaign site, Joe Klein wrote of the time, in the mid-'60s, that Sanders became the target of an assassination attempt after he "had given a speech condemning the defacing of a synagogue in Columbia."

"We were having a dinner party one night and we heard what sounded like explosions in front of the house," Sanders told Klein. "It turned out to be nothing more than eggs hurled at our front windows, but it sounded terrifying and we all jumped under the table. As we were cowering there, there was more noise -- shotgun blasts. I thought I was going to die, for sure. And I couldn't find Zoe. Turns out she had gone to the closet, gotten her gun, and came out the front door firing. She actually leveled down on them. Whoever it was ran away."

So why, if Sanders likes guns so much, did he not respond to the NSSF's questionnaire? A campaign official said the reason was simple -- the office gets hundreds of such questionnaires and doesn't have time to answer them all.

According to the latest polls, Graham is slightly favored to beat Sanders. In a recent debate, which occurred before suspects were caught in the sniper case, Sanders said that he would support a national ballistics database to tie the bullets used in crimes to gun owners, while Graham said he would not.

Editor's Note: This story has been corrected since it was first published.