What Bill Gates and advocates for each side have to say about the court's decision to approve the Microsoft antitrust deal. 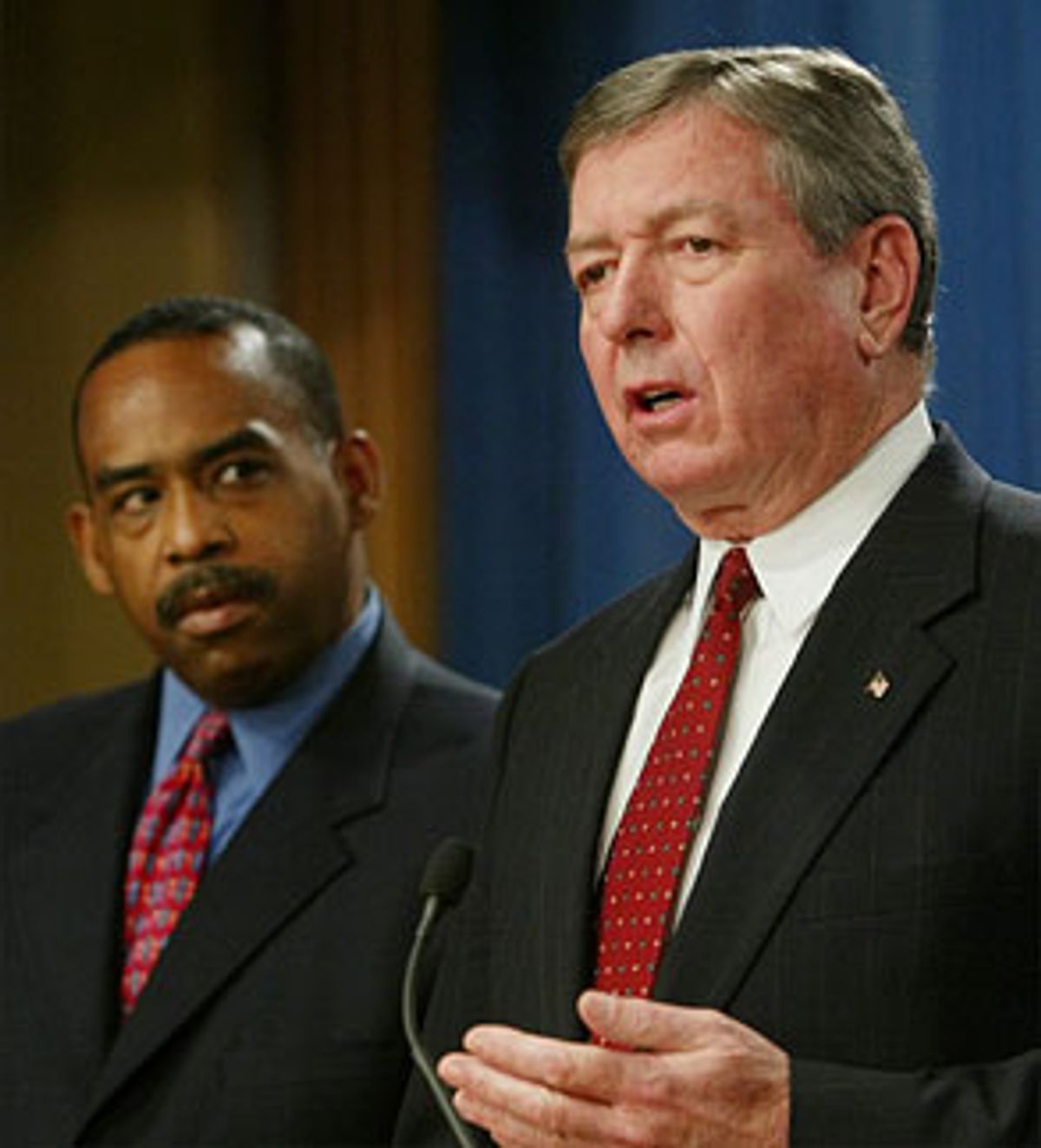 U.S. District Court Judge Colleen Kollar-Kotelly Friday released a decision approving, with some modifications, the settlement deal that Microsoft and the Department of Justice reached almost exactly one year ago. The judge also largely rejected the claims of the nine states that had refused to sign on to the settlement and instead pressed for tougher penalties. (The full text of the decisions is available here.)

Here are some quick reactions from participants and observers.

We believe that today's ruling largely affirming the settlement we reached with the Department of Justice and the nine states represents a fair resolution of this case. It's a major milestone. We thank the mediator, the federal government and the nine states that helped forge the settlement, and we appreciate the court's extensive work. This settlement puts new responsibilities on Microsoft, and we accept them. We recognize that we will be closely scrutinized by the government and our competitors. We will devote the time, energy and resources needed to meet these new rules. I am personally committed to full compliance.

We have already made many of the necessary changes. We have increased the technical information we make available about our products. We have made it simpler for customer manufacturers to replace Microsoft software with programs of their choice on the Windows desktop. We have made our licenses more uniform. And we have appointed an internal compliance officer. We are also training our employees so that the settlement is understood and followed in every part of our business.

We are committed to being a responsible industry leader. We are dedicated to the core values that built this company from the beginning, helping people and businesses realize their full potential through great software. A lot has changed since this lawsuit began. The Internet is becoming an increasingly vital part of our lives. Economic growth has cooled worldwide, and it has been a time of increased competition and upheaval in the technology industry.

But I also believe it's a time of promise. We have only scratched the surface of what software can do in our homes, our schools and our economy. While putting new responsibilities on Microsoft, this settlement also gives us the freedom to keep on innovating for our customers. The next few years will be an incredibly exciting time for our industry as Microsoft and many other companies work to develop technology for an increasingly digital world. We are pleased with another step in this case behind us. We can focus even more on building the future of technology.

Mark Cooper, director of the Consumer Federation of America

There's not much to read [in the court documents] -- she accepted the settlement, and our concerns about the settlement remains. The chance that independent consumers will find and install different applications is almost zero, because it takes six or seven clicks and Microsoft is the initial default, and you have to click through a series of screens to add other software.

And now everything Microsoft does is with the veneer of approval from the court. In a certain sense a lot of these practices which this settlement will now not discourage are not going to get challenged. If you wanted to counteract the monopoly you needed to have stronger assurances, you needed to change the incentives for the PC manufacturers. They needed to believe and feel that they were not at risk if they went for a skinned-down operating system with lots of customized applications for consumers. That was not conveyed in the settlement.

In the big picture, the porting of [Microsoft Office] to other operating systems is essential, and that's what the non-settling states wanted. The settlement didn't even get at the browser -- forget Office. We think the implementation shows that the environment has not changed so far.

In theory, the non-settling states can appeal. You need to ask them, but I don't suppose that they will appeal, and what they may start doing is looking at the monitoring of this settlement.

From my perspective it's good news diluted only by my adjustment that the case never should have been brought in the first place. Maybe we can put this behind us and Microsoft and the other folks in this business can get on with creating software. That's what people are hoping for.

But there are two very deep problems here. One is that the antitrust laws are regularly co-opted by disgruntled competitors -- folks who find it easier to accomplish through the political process what they haven't in the marketplace. The second is that the states have found it their place to do what is the function of the federal government. They've come up with a separate set of remedies that they believe is a better interpretation of the federal laws than what the agency that is charge with interpreting those laws -- namely the Department of Justice -- believes.

The states stipulated that their claims are "coterminus" with the Department of Justice's and they said that state claims "neither enlarge nor conflict" with federal claims. Yet they feel they are authorized to take this on, and indeed they are. Congress ought to strip the states of their ability to do that. As a legal matter the court did decide that the states had standing here, and I agreed that they did. But the law ought to amended -- well, frankly, it ought to be repealed, but at least it should be amended to strip the states of that ability. Otherwise the states are given two bites of the apple and Microsoft is in double and triple and more jeopardy.

There's no question that these nine states can appeal this to the D.C. Circuit -- that would be the third or fourth pass through the D.C. Circuit. Whether the states do so is anybody's guess. My hope is they recognize that this is a waste of everybody's time and money. Not just the cost of the litigation, but also the effect on innovation. The interesting datum I tell everyone is that Enron had a $60 billion loss at its bankruptcy -- and it's interesting to note that Microsoft stock declined by $80 billion in one day. This has not been cost-free, this silly antitrust suit.

Dan Kegel, a software engineer in Southern California who wrote a letter to the Justice Department in January, signed by more than 2,000 people, criticizing the proposed settlement.

I did a [computerized] text comparison of the new order with the earlier proposed settlement. I have a good idea of what appear to be the differences between the two -- they're up on my site.

I think it did address what I said in my letter a little bit. They can't threaten retaliation now. That might change the mood of things a little bit. The changes are fairly complex. There are a few nice touches, like Microsoft has to pay the plaintiff's expenses. It's nice that Microsoft had to lay out a little bit of cash. The biggest disappointment I have is that the disclosure requirements weren't changed very much -- so WINE and SAMBA will have to continue reverse engineering.

This closes the most obvious loopholes in the proposed settlement, but it's not going to slow them down.

Richard B. McKenzie, professor of economics at the University of California at Irvine and author of "Trust on Trial: How the Microsoft Case is Reframing the Rules of Competition"

Those of us who were on Microsoft's side seem to have lost some battles but won the war. The extreme remedies have been set aside, and the decision seems fairly reasonable to me. If there was a problem of Microsoft retaliating at computer makers, it looks at those things. It gives [computer makers] more freedom to put their icons on the screen.

The problems are complex, but you shouldn't expect that a firm that operates where there are network effects to be very aggressive in fighting off competitors. And it can actually be doing that to benefit consumers. If you have network effects, consumers benefit from having that network. When a threat occurs, like there was one from Netscape, you should expect the firm to do things like offer zero prices, especially when the marginal cost of reproduction is zero and the net effect can be that, to the effect that you hold the network together, you benefit consumers.

That's why I think it's understandable why two-thirds of consumers sided with Microsoft in this case.

Glenn Manishin, an attorney who represents ProComp, a group that gets some of its funding from competitors of Microsoft

This is eminently appealable. Whether the court will permit interested third parties to appeal, I don't know. It would be unseemly for the court not to allow the opponents of this decision to appeal it.

[Judge Kollar-Kotelly] has accepted every provision proposed by the Justice Department. She has rejected every change proposed by states who didn't settle. The folks that I represented made the simple argument that the case involved several forms of anticompetitive activity, like putting Explorer into Windows and polluting the Java language -- and she does nothing about that. She bends over backward to justify accepting the settlement. She says it's OK to [include the browser] because they're taking the icon off the desktop. But the case was never about icons. It wasn't about whose icon was on the desktop. She just glosses it over. It's really sad.

Judges are supposed to exercise independent analysis. It boggles my mind that a federal judge could spend six months analyzing a case of this complexity and write an opinion that doesn't even reflect a serious discussion of these issues. We said it would be unconstitutional to defer to the Department of Justice in the case of the non-settling states -- and she doesn't even address that issue. You can say that my views have been affected by that fact that I've analyzed it on behalf of my clients. But if you read that 100 pages you'll see it's like ships passing in the night. It's not only an issue of her not getting it, it's an issue of her not even realizing she hasn't addressed it.

Jonathan Zuck, president of the Association of Competitive Technology, a group that has sided with Microsoft in the case

I think that what the states were most concerned about were some of the loopholes that limited the flexibility of [computer makers], and I think [Kollar-Kotelly] placed a lot of focus on closing those loopholes.

In large measure it resembles what was proposed by the Department of Justice -- none of that was a win for Microsoft. They've already had their loss and they're already going to be one of the most highly regulated companies in the industry. It's going to result in and has resulted in fundamental changes to how Microsoft does business. With the ruling that it's a monopoly, it means they can't compete as aggressively as their competitors do. The same stuff that goes on in the industry is no longer available to them. It's a fundamental culture shift. Anybody who says that [these aren't strong penalties on Microsoft] is smoking glue. The reality is that Micrsosoft will be a regulated company in an industry that isn't regulated. There's nothing that Microsoft did that its competitors don't do today. The only difference is that Microsoft passed some line that said it was a monopoly. They're being held back to let their competitors get a leg up.

I can see how it can be good, but I also coming out of this industry and know how quickly things change. And I hope this doesn't result in shackling the innovation we've come to expect from them.