Politicians who voted against Bush's Iraq resolution were supposed to pay a harsh political price. Instead, they're thriving on the campaign trail. 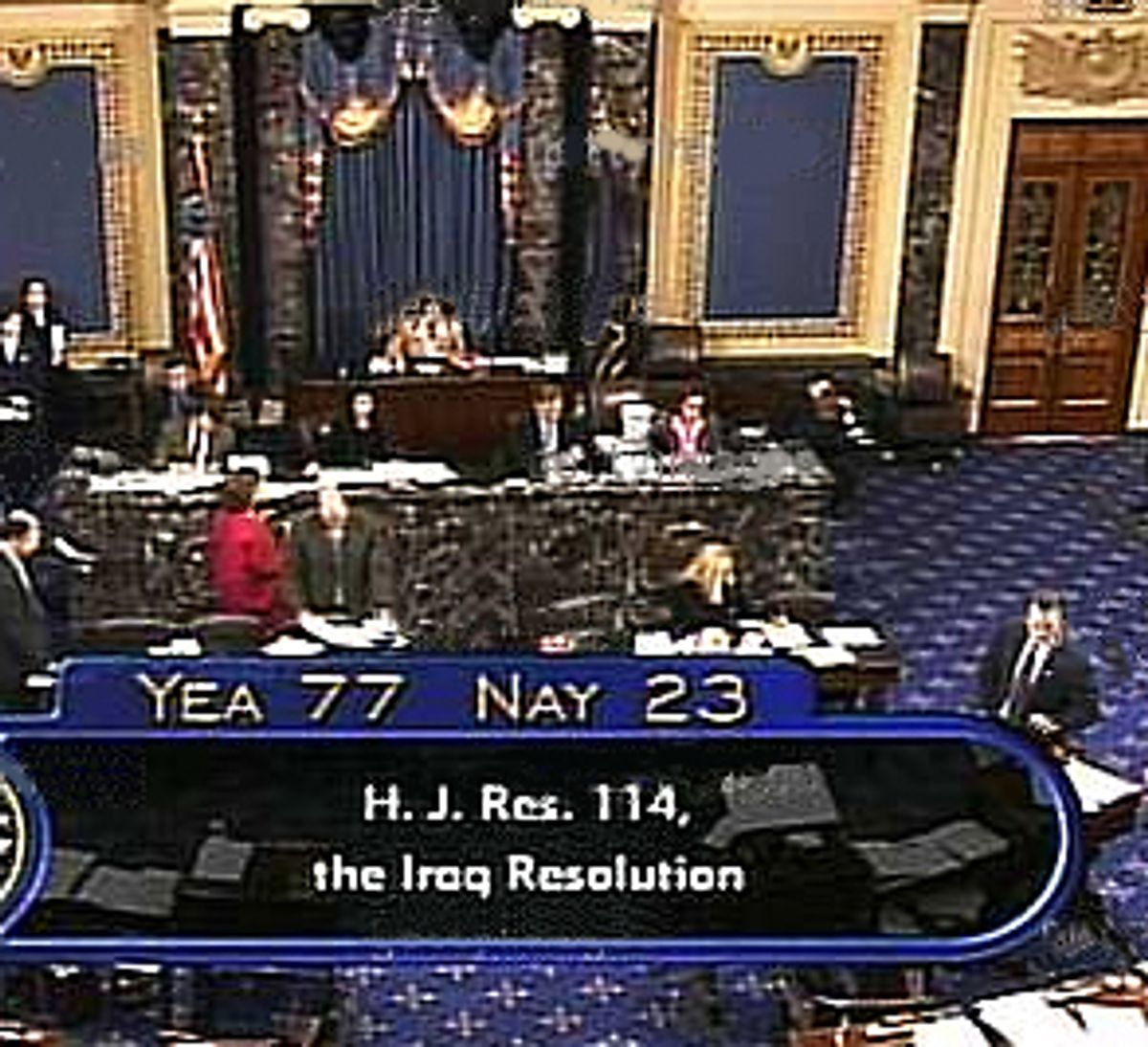 Twenty-three senators and 133 congressmen voted against Bush's Iraq resolution in October, authorizing the president to strike against Saddam. And in not a single case, contrary to Washington's conventional wisdom, does it appear to be hurting any of their chances for reelection. It might actually be helping them.

The late Sen. Paul Wellstone, D-Minn., whose antiwar stance was considered politically perilous given his close reelection fight against Republican Norm Coleman, actually got a boost in the polls after voting against the war. While he was trailing slightly before the vote, a mid-October poll from the Minneapolis Star Tribune had him running at 47 percent to Coleman's 41 percent.

In October, when MoveOn, an organization founded to oppose the impeachment of President Clinton, launched a fundraising drive through its PAC to raise money for antiwar members of Congress in tough reelection campaigns, $1 million poured in from 25,000 donors in 48 hours. That's now up over $2 million, and the money has been distributed to Wellstone's campaign, as well as to Reps. Rick Larsen and Jay Inslee, both Washington Democrats; Rep. Rush D. Holt, D-N.J., and Rep. James H. Maloney, D-Calif. Congressional delegates from across the country who voted against the resolution report unprecedented shows of support and thanks from their constituents.

"I've been an elected official for 20 years," says Sen. Dick Durbin, D-Ill. "I've cast thousands of votes, and I would put this as one of the top votes when it comes to what I call street-corner reaction."

"People who don't know me seek me out and thank me for that vote -- a broad spectrum of people who self-identify as Republicans or veterans. Women of course feel very strongly about this, African-Americans -- I went to a Korean-American reception last night and I didn't expect they would bring it up, but it's a big issue for them," Durbin said. "I do train stations here [to meet] suburban commuters. I must have seen 4,000 people, and exactly two came up and disagreed with me on Iraq. I can't tell you how many people stopped in the rain and took off their glove and said, 'I want to thank you for that vote on Iraq.' It meant a lot."

Durbin's Republican opponent, Jim Durkin, has tried to use Iraq against the senator, calling him an "appeaser." But a recent poll taken by Research 2000 shows Durbin leading by 18 percent.

"I was in church a couple of weeks ago right before the vote was cast," Durbin continues. "I went up to take communion; I was kneeling down and a guy stops next to me in the aisle and says, 'Senator Durbin, stick with Senator [Robert] Byrd [D-W.V.] on Iraq.'"

Of course, all politicians claim their constituents' support, but Durbin's comments are echoed by other antiwar politicians. And while poll numbers for congressional races are harder to come by, most report that their vote has only helped to shore up support. "It's been an amazing response on the sidewalk," says Inslee. "On the ferryboats I ride, there are people coming up to pat me on the back and telling me they appreciate my vote. That hasn't happened in the last four years. There's a very strong reaction from people who feel very strongly about this issue."

"We had an unprecedented number of e-mails, phone calls and letters on this issue," says Joel Barkin, spokesman for Rep. Bernie Sanders, I-Vt. "I would say that almost a thousand to one were against voting in support of the resolution. The congressman believes that in fact this country as a whole does not support this resolution."

How can that be? After all, the polls show that a majority of Americans are behind Bush's Iraq policy. A Pew Research Center survey released last week has 55 percent of the public supporting military action against Saddam Hussein.

But while such polls roughly measure the drift of public sentiment, they don't measure its intensity. "Polls are a reflection of breadth," says Wes Boyd, president of MoveOn. "We've seen polls on the Iraq resolution and administration policy, and depending on how they're worded, you get a lot of different readings." For example, in the Pew poll, only 27 percent of respondents favor attacking Iraq without our allies' support, and only 48 percent believe the president has adequately explained his reasons for war. Such polls, says Boyd, "indicate to us that the support the administration hoped was there is paper-thin, that when you probe it a little bit, the view looks very different. That's why we took up the campaign."

So while most Americans aren't against going to war with Iraq, passionate opponents of it seem to outnumber passionate proponents. "This is not a war that the American public is demanding that George Bush fight," says James M. Lindsay, a senior fellow at the Brookings Institution who studies Congress and foreign policy. "It's more a war that George Bush is insisting to the American public must be fought." And in elections, he says, passion matters. "To a good extent, politics in this country depend upon and respond to people with deep, intense preferences," he says.

That's why he wasn't surprised that Wellstone's no vote seemed to give him a boost. "For someone like Wellstone, someone heavily identified in voters' minds with a certain policy position, if all of a sudden he turned on a dime, he sullies his own image and alienates an important part of his constituency."

Sometimes, says Lindsay, "Politics and good policy are lined up. For Wellstone that was the case."

If pundits have missed the electoral significance of enraged liberals, it might be because they have a bad habit of taking the right-wingers who claim to speak for ordinary Americans at their word. Boyd sees an analogy to the Republicans' impeachment campaign, which party leaders and pundits alike both assumed enjoyed the support of the masses. "I remember 1998, after the Republicans took up the strategy of impeachment. Going into midterm elections, the Republicans thought it was a pretty good strategy to undermine the president." MoveOn ultimately raised $2.5 million for politicians who voted against the 1998 impeachment.

"If more Democrats had recognized the existence of that intense feeling against impeachment, the Democrats would have recaptured the House in 1998," he believes.

Of course, that assumes that voters in the rest of the country share the views of Washington and New Jersey, two states with particularly strong liberal blocs. The situation varies regionally, and most of those who voted against Bush's Iraq resolution don't live in deeply conservative districts, where such a vote might have been used effectively against them.

"I can't tell you, if I were a candidate in Arkansas, if I would view this the same way," says Durbin. "Most Democratic candidates in the South and the West were quick to gather around the president. The marginal seats were in conservative areas. The leadership felt the sooner they could neutralize this issue the better."

Another group of Democrats who voted for the resolution includes presidential hopefuls like House Minority Leader Dick Gephardt, who might have feared the issue would come back to haunt them. Lindsay doesn't believe it would have. He calls the idea that antiwar votes derail political careers "the Sam Nunn fallacy," which he describes as "the notion that San Nunn took the wrong position on the [Gulf] war and as a result saw his presidential ambitions go up in smoke." Of course, after voting against the Gulf War resolution, the conservative Democrat watched his presidential bid flounder.

"The failure of Nunn to become a major Democratic presidential candidate had a lot more to do with fact that his domestic political views were more in tune with the Republican Party than with the typical voter in a Democratic primary," Lindsay says.

Besides, he says, while some politicians might regret how they voted on the Gulf War, that conflict isn't necessarily analogous to the current situation. "Back in January of '91, a lot of the Democrats voting had in mind what happened with the Gulf of Tonkin resolution. When they voted in the fall of 2002, many had in mind the first Gulf War resolution. Like generals fighting the last war, Democratic presidential candidates tend to vote for the last resolution."

Of course, Democrats weren't so much trying to toughen up their image as change the subject. Kori Bernards, a spokeswoman for Gephardt, insists that the war isn't a major issue for his constituents. When he travels, she says, "people don't ask us about Iraq. People ask us about prescription drugs and Social Security and healthcare."

Given the overwhelming concern other Democrats are hearing about an imminent war, this seems unlikely. Yet it's in keeping with the Democratic leadership's attempt to sweep the issue aside -- a plan some say was a terrible idea. "The strategy that many folks on the Democratic side are trying to pursue is a foolish one -- that if they just don't talk about this war stuff they can get it off the agenda," says Boyd. "They're the opposition party now and the president sets the agenda. Period. They needed to talk about this, needed to present an approach to it that really met their constituents' concerns."