With Congress now firmly in Republican hands, the White House will push its agenda more aggressively than ever. 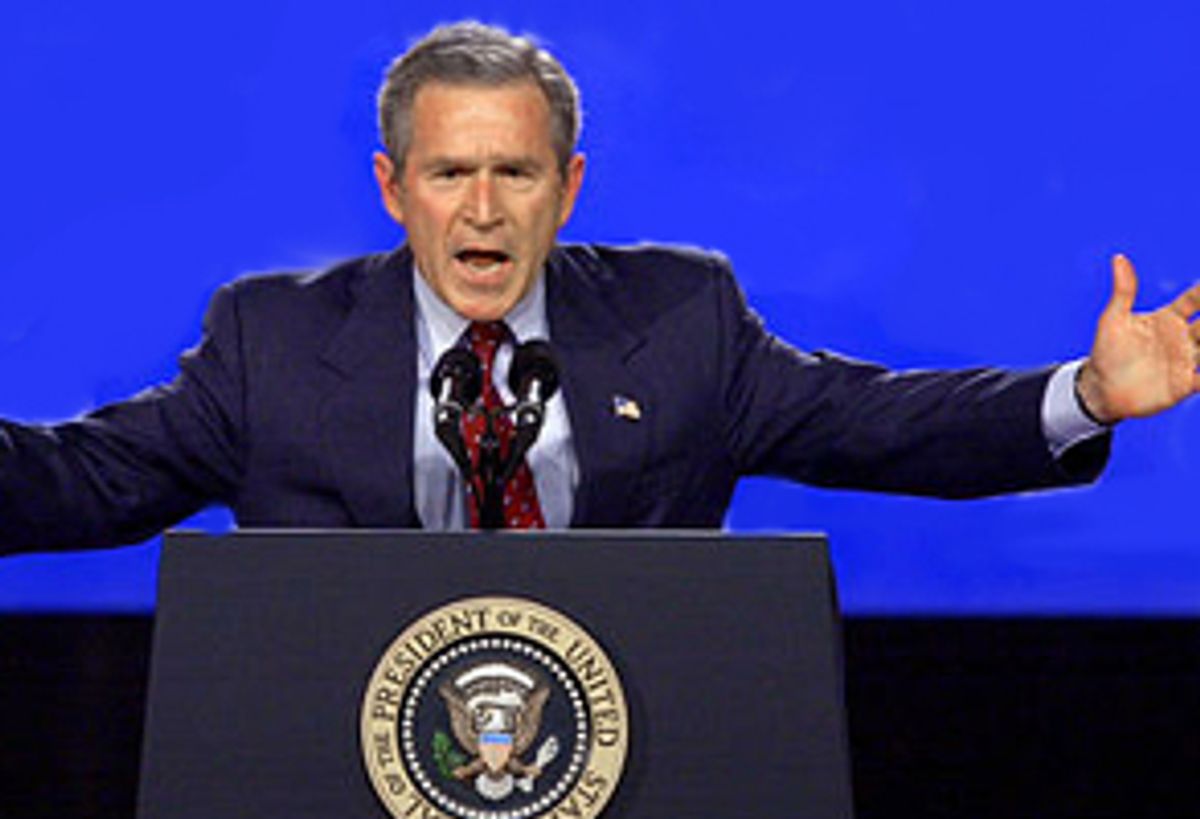 President Bush ended Election Night 2002 with an outcome that eluded him two years ago: a resounding Republican victory.

The GOP won control of the Senate early Wednesday after Missouri Sen. Jean Carnahan conceded to Republican Jim Talent, and strengthened its hold in the House of Representatives as well. Though key states like Minnesota and South Dakota remained too close too call hours after the polls closed, the GOP won an upset Senate victory in Georgia and closely watched races in North Carolina, New Hampshire and Colorado. And the party won some important statehouse victories as well. The historic tone of the night was set early, when the president's brother, Florida Gov. Jeb Bush, won reelection easily over Democrat Bill McBride.

President Bush made the election at least partly a referendum on his own popularity -- and his handling of the economy and the war on terrorism -- and had been criss-crossing the country since August to shore up GOP chances in the House, Senate and statehouses. And it apparently worked. "The person who deserves the most credit tonight is the president of the United States," said former Christian Coalition leader (and now Georgia GOP chair) Ralph Reed. "He stitched himself a pair of coattails," conceded CNN "Crossfire" co-host and Democratic strategist Paul Begala.

Bush could sweep in some bold change on those same coattails. With control of both houses of Congress, he would be able to push through his controversial conservative judicial appointments, make sure his tax cut isn't repealed and weaken environmental protections. Working with a new, more Republican Congress, he is also likely to face even less congressional restraint on his moves against Iraq.

With Democrats holding a one-vote margin in the Senate and Republicans up only six votes in the House, the surprising defeat of incumbent Cleland in Georgia set the tone for the night. A Vietnam veteran who lost three limbs in combat, he was hurt by hard-hitting Chambliss ads questioning his patriotism and linking him to Osama bin Laden because he voted with Democrats to delay action on parts of Bush's homeland security plan.

Senate Majority Leader Tom Daschle promised the Democrats would continue to fight Bush's agenda. "Giving the Republican Party carte blanche in the Senate, House and White House is not something that the American people want," Daschle said.

But faced with losing his job, Daschle also came in for criticism from the right and left Tuesday night. His decision to delay the homeland security vote was blamed for giving Bush an issue to use against incumbents like Cleland. Critics on the left blamed Daschle and the Democrats' reluctance to energetically challenge Bush on his handling of the economy and Iraq for the party's unprecedented midterm defeat. "It's not about moving right or left, it's about standing for something," said James Carville, an architect of President Clinton's victories.

Even before the polls opened, the election was noteworthy because it was expected to be the first time in recent history the party that held the White House would not lose seats in the midterm election. Since 1934, the president's party has won House seats in midterm elections only twice -- and both of those victories went to Democrats.

There were odd and tragic twists in at least two races: New Jersey's Sen. Robert Torricelli abandoned his campaign in October, tainted by scandal, and Lautenberg needed help from the courts to get on the ballot. And just 10 days ago, progressive Minnesota Sen. Paul Wellstone, a Democrat, died in a plane crash, along with his wife, daughter and some campaign staff, forcing the party to turn to former Vice President Walter Mondale to take his place on the ballot against former St. Paul Mayor Norm Coleman.

The day was marked by Democratic complaints about voter intimidation in Tennessee, Texas, Maryland and Pennsylvania. An Arkansas judge kept the polls open an extra 90 minutes in Pulaski County after Democrats complained that some polling places ran out of ballots. The Justice Department dispatched 400 lawyers and observers to watch polls around the country, and both party organizations also had armies of monitors in the field to watch for voting irregularities.