The U.S. helped build the Islamic fundamentalist movement threatening to take over Pakistan. Now can it rescue the world from the deadly consequences? 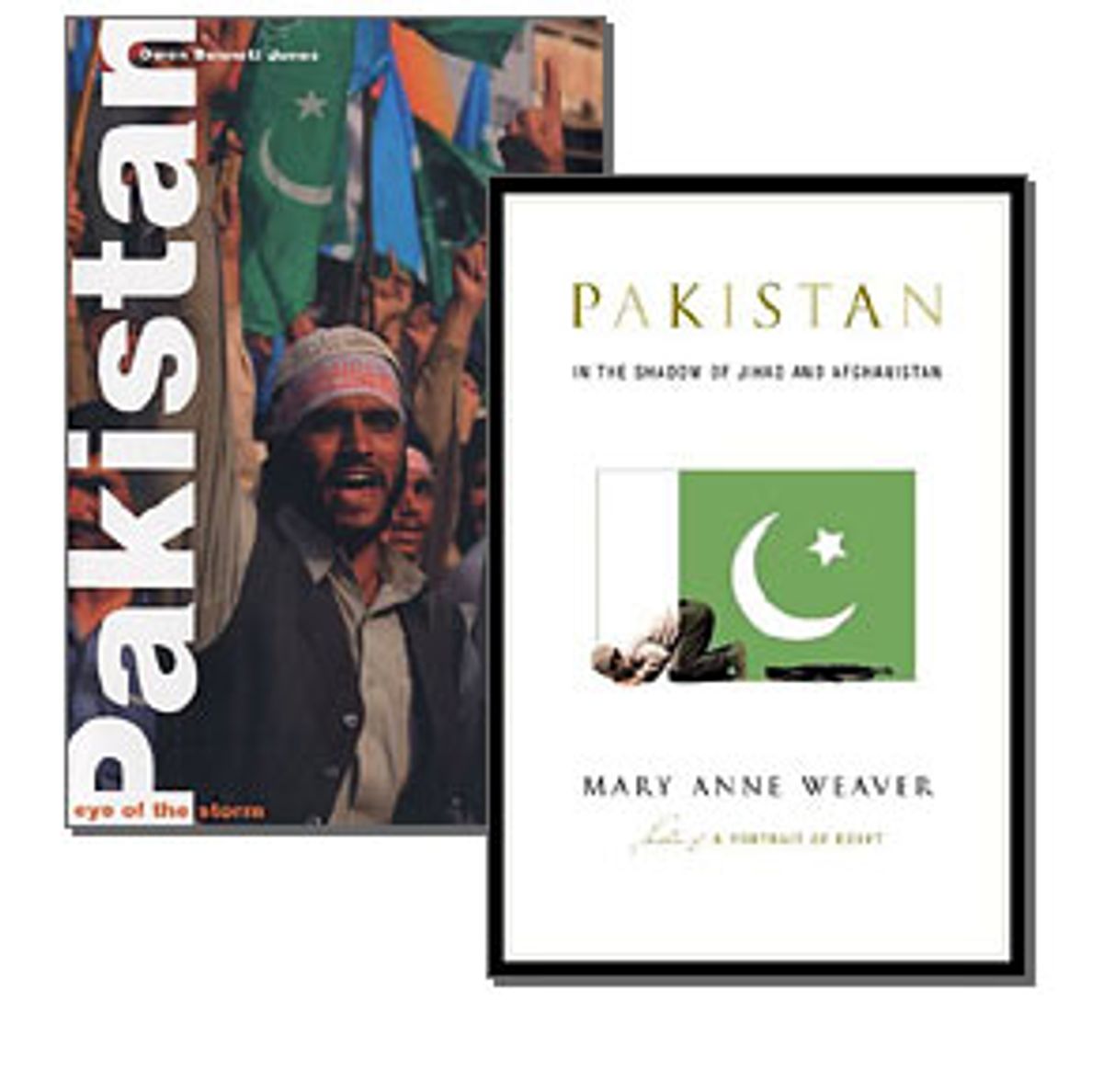 In the fall of 2001, readers desperate to get a grip on the grotesque Afghan regime that America pledged to overthrow -- and its link to the terrorists, none of them from Afghanistan, who made a charnel house of lower Manhattan -- turned to Ahmed Rashid's authoritative "Taliban." In nearly 300 exhaustively reported pages, Rashid led readers through the maelstrom of recent Afghan history, but he also made clear that the bizarre student militia led by Mullah Omar and funded by Osama bin Laden was bred not in Afghanistan but in the madrassas of Pakistan, our chief ally in the war on terror. After last year's war, Afghanistan has become less of a threat to global security. Pakistan, though, has likely become more of one.

Right now, much of al-Qaida is probably in Pakistan, a nuclear-armed country riven not just by ascendant Islamist extremism, but also by fierce communal conflicts between both religious sects and ethnic groups. Six months ago, when the country was engaged in a terrifying nuclear standoff with India, American attention turned briefly to the subcontinent, but was soon diverted by the president's lurching campaign against Iraq.

Still, anyone who wants to more deeply understand the roots of the terrorism that has convulsed the world from New York to Bali to Moscow would do far better to study Pakistan than Iraq -- especially since the former offers valuable lessons about some of what we might expect following regime change in the latter. Either of two fine new books, Owen Bennett Jones' highly detailed but occasionally skewed "Pakistan: Eye of the Storm" or Mary Anne Weaver's less exhaustive but more fascinating and authoritative "Pakistan: In the Shadow of Jihad and Afghanistan," would be a good place to start.

Both do for Pakistan what Rashid did for the Taliban by offering a way for general readers to get a grip on complex political currents that seem to be leading inexorably toward crisis. Perhaps most important, both make clear that the fault lines in the country -- as in the Middle East -- aren't simply between secularists and fundamentalists, or between democracy and authoritarianism, but between Shiites and Sunnis as well as among various mutually antagonistic ethnic groups. In Pakistan's case, those groups include Pathans (known in Afghanistan as Pashtuns), Punjabis, Balocis, Sindhis and Mohajirs, all of whom, thanks largely to American policies, have lots of guns.

"The accumulation of disorder in Pakistan is such that it could well be the next Yugoslavia," writes Weaver, echoing an assessment Robert Kaplan made in the Atlantic Monthly two years ago. She quotes Marine Corps Gen. Anthony C. Zinni, Bush's peace envoy to the Middle East, saying, "If [Musharraf] fails in carrying out his reforms and putting Pakistan back on track, I can foresee three worst-case scenarios: the true military hard-liners will take over; the religious hard-liners will take over, and we'll see a theocracy like Iran; or Pakistan will be faced with complete chaos and fall apart." The country, awash in CIA-supplied arms from the Afghan jihad, could be called the terrorism capital of the world. Weaver points out, "As early as 1987, of 777 terrorist incidents recorded worldwide, 90 percent took place in Pakistan."

A New Yorker writer, Weaver has been covering Pakistan for 20 years, and she's gained extraordinary access inside the country -- she's had multiple interviews with Gen. Zia ul-Haq, Pervez Musharraf and Benazir Bhutto. While Jones, a former Pakistan correspondent for the BBC, aims at a more thorough history, replete with charts and graphs, Weaver's book is prismatic, relying on odd, incredibly telling details.

She's a hugely compelling writer -- parts of her book read like an airplane thriller, others like a surrealist farce. Jones has a wealth of experience in the country, but fewer well-placed sources. Both tell the suspenseful story of the 1999 military coup that brought Musharraf to power, a coup that occurred while Musharraf was stuck on a passenger airliner running out of fuel; soon-to-be deposed Prime Minister Nawaz Sharif wouldn't allow it to land. But while Jones tells it from the ground, Weaver does it through Musharraf's eyes. The former is a fuller account, the latter a more immediate one.

There are merits to both approaches. Reading Weaver won't tell you how many submarines Pakistan has (10) or what percentage of its population isn't expected to live to age 40 (20 percent), as Jones will. There's little in Weaver's book about the succession of Bangladesh or the internal political contradictions that made its independence more or less inevitable. Jones goes into much greater detail about the building of Pakistan's atomic bomb and possibility that the nation will become a nuclear proliferator.

Yet Weaver manages to convey the nation's emotional attachment to its nuclear power in startling images that feel visceral to the reader: "[I]n every city and town there are monuments to Pakistan's nuclear bomb," she writes. "In Quetta, Peshawar, Karachi, and Lahore towering replicas rise ... And in the capital of Islamabad a futuristic granite structure soars by day and is illuminated by night in fiery hues of orange. As I stood before it one evening and puzzled over what it meant, a Pakistani friend explained that the interior lighting was meant to impart the glow of the nuclear weapon that had exploded in the Chagai Hills."

More than a historian, Weaver is a great travel writer in the Graham Greene mode, with an eye for illustrative absurdities. She spends a whole chapter on the bizarre houbara bustard bird hunts, in which hordes of impossibly wealthy Middle Eastern royals descend on Pakistan with awesome retinues to hunt the bird -- extinct in their own lands, its flesh believed to be an aphrodisiac -- from the windows of tricked-out luxury vehicles. Her reporting here does more than point out a weird curiosity; it gives the reader an oblique, novelistic insight into Arab power in the region and the way embedded customs have been exaggerated rather than obliterated by modern technology.

Houbaras are endangered. Pakistanis aren't allowed to hunt them, and some wildlife areas are ostensibly protected. But such regulations mean little, given the gifts the sheiks can bestow on local leaders -- Weaver recalls the minister of defense of the United Arab Emirates presenting one powerful nawab with a Kalashnikov plated with 3 pounds of 24-karat gold. In Weaver's telling, the houbara has become "a pawn on the geopolitical chessboard," smoothing the relationship between Pakistan and the Arab world, resulting in even more infusions of Saudi money, and through Saudi-funded schools and mosques, strengthening militant Islam.

Jones is more doubtful than Weaver about the power of the Islamists -- perhaps too doubtful. His book attempts to defend Pakistan from some of its harsher critics, arguing, "For years now Delhi has tried to portray Pakistan as a rogue state filled with Islamic extremists hellbent on exporting terrorism. While this message has resonated neatly with Western anti-Islamic prejudices, I shall argue in this book that such a depiction of Pakistan is unfair."

He dismisses predictions of an Islamic backlash resulting from Musharraf's alliance with the U.S. against Afghanistan and writes, "Although some religious parties have participated in elections they have never done well ... There are various explanations for their lack of success, of which the most obvious is their unpopularity." Before his book was even released, events undermined this position: Islamists did better in the October elections than they ever had before and now control two of Pakistan's four provinces.

Obviously, journalists aren't soothsayers, and it would be ridiculous to criticize Jones for failing to divine the future in a region known for its extreme unpredictability. Yet some of his comments early on suggest an unwillingness to take radical Islam seriously enough (which is not at all to say that he dismisses it). Writing of a Jaish e-Mohammed suicide bombing of Srinigar's Legislative Assembly building that killed 39 people, he says, "Coming so soon after the 11 September attacks it was perhaps inevitable that the operation was perceived as a terrorist one." What else could it possibly be perceived as?

Still, Jones' argument has some credibility. Fundamentalism, clearly, is only one force among many tearing at the country, and Jones makes a convincing case that ethnic nationalism is a more imminent threat. His book includes a fascinating chapter that details the conflicts between the natives of the Sindh provinces and the Mohajirs, people from what is now India, who moved there after partition in 1947.

In 1975, a Sindhi nationalist politician described Pakistan as an "accident and freak of nature." In 1987, Jones writes, when Mohajir nationalist leader Altaf Hussain "asked a rally in Hyderabad whether they would rise to defend Pakistan in the event of an attack by India they responded in the negative." Additionally, there have been independence campaigns in Bolochistan and recurrent calls for a Pathan homeland, which would encompass parts of Afghanistan. According to Jones, loyalty to the Pakistani state itself is almost nonexistent outside the army.

Indeed, both Jones and Weaver point out that government-sponsored fundamentalism has arisen partly in response to separatism, as an attempt to create a unifying counterweight. Interviewing the Baloch nationalist leader Mir Ghaus Bux Bizenjo, Weaver asks why, given Balochistan's secular history, the mullahs were making "surprising electoral gains." She writes, "He said that they had been funded, and their campaigns run, by the ISI [Pakistan's state intelligence agency]. 'The mullahs are not nationalists or anti-imperialists,' he said with a loud laugh."

That's why, as Jones says, "If the Islamic radicals are indeed about to face their 'day of reckoning' then Pakistan will need an ideology to replace Islam." This is a crucial point, and not just about Pakistan. Right now, America is demanding that Pakistan root out Islamist terrorists, and while the Bush administration has turned a blind eye to Musharraf's curbs on democracy, there's much Western condemnation of it. Yet the growing popularity of militant Islamism among Pakistan's people may mean that a campaign against it is antithetical to democracy.

The Bush administration's rhetoric often paints a world in which dictatorship, fundamentalism and ethnic hatred are on one side and democracy is on the other. Indeed, Pentagon policy on Iraq assumes, with reckless optimism, that a more democratic Iraqi government will undermine its authoritarian neighbors, resulting, somehow, in the spread of Western values in the Arab world. What the situation in Pakistan suggests is that the weakening of authoritarian military regimes opens the gates to theocrats and separatists.

This is the Catch-22 America created for itself by nurturing Islamic fundamentalism in Pakistan during the Afghan jihad. Propping up authoritarian regimes in the Muslim world betrays our values and nurtures the grievances that give rise to terrorism, but in many places abandoning or undermining these regimes would empower radical Islamists or separatists. The choice may not be between democrats and dictators, but between different kinds of dictators and bloody chaos. It's a reality that contradicts every humanistic impulse most Americans have, but one that needs to be considered as our government goes charging off on its messianic campaign to remake the world.