A triumphant Bush is set to appoint an army of conservative judges who will overturn civil and reproductive rights -- and could kill Roe vs. Wade. 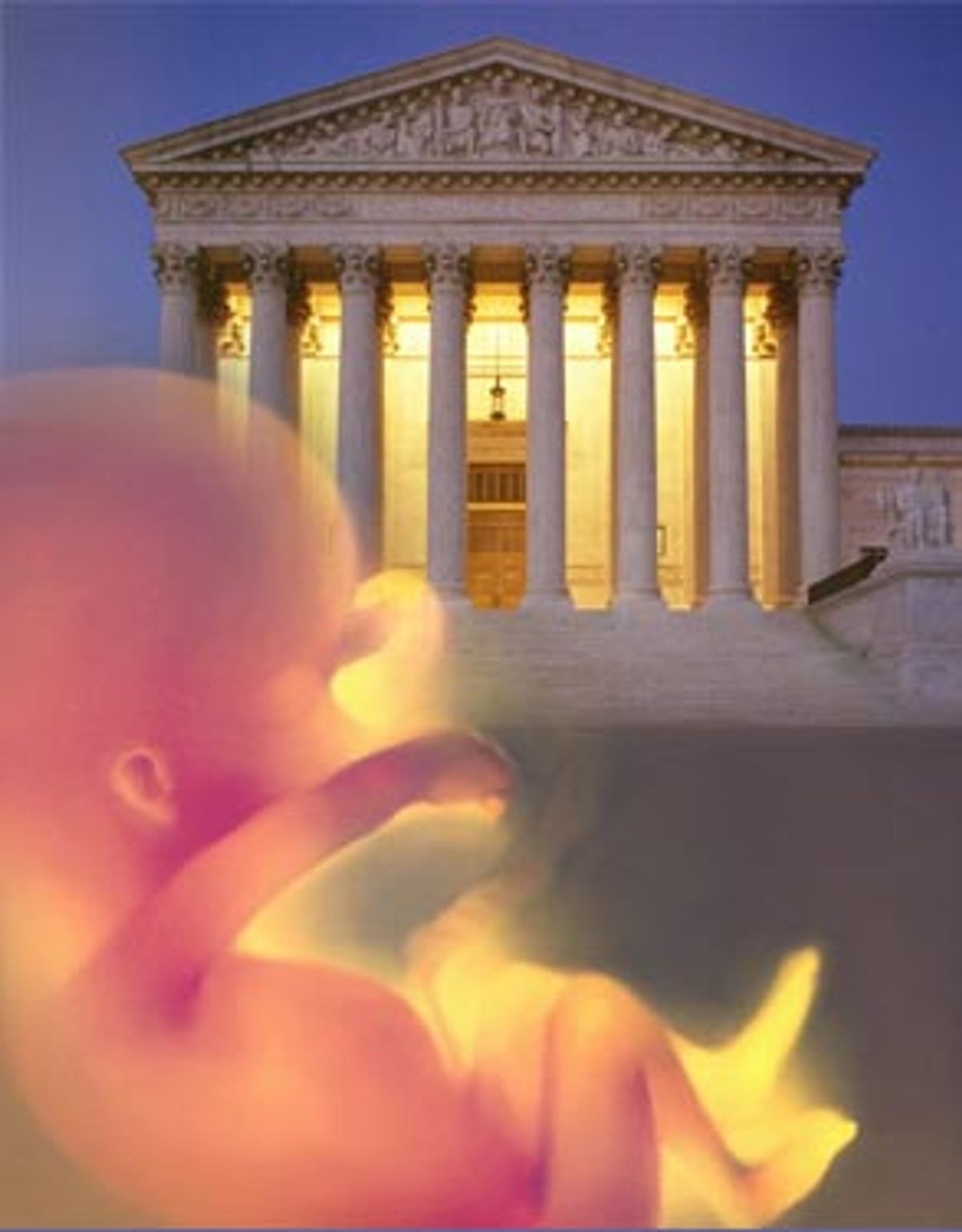 The media generally tends not to pay much attention to judicial appointments outside the Supreme Court, but politicians know how important they are. After all, the nation's dozen circuit courts, the second-highest in the land, are the courts of last resort for most people. "There's no doubt at all that the lower-court judges have a significant say and often a final say on lot of legal issues," says Michael Gerhardt, a William and Mary School of Law professor who authored a book about the federal appointments process. Last term, the Supreme Court heard about 90 cases, the circuit courts 57,422.

For right-wing voters, says Phyllis Schlafly, founder of the Eagle Forum, appointments to these courts is a major campaign issue. "Conservatives want Bush's nominees confirmed," she said Wednesday. "We're mad at the way they were maneuvered out of votes. Pro-abortion feminists have got a death grip around the top of the Democratic Party."

We're about to find out why they care so much. According to Bill Marshall, deputy White House counsel during the Clinton administration, in the next few years we'll see changes in three main areas: "a softening of establishment-clause restrictions [which mandate separation of church and state]; weakening of reproductive rights; and a strengthening of rights of moneyed interests, particularly property rights and the speech rights of corporate entities." And because of Bush's penchant for choosing young judges like 41-year-old Miguel Estrada, considered a favorite for the Supreme Court, these changes are likely to last decades. "We're talking about the entire reproductive life of my 9-year-old daughter," says Kim Gandy, president of the National Organization for Women.

During his first two years in office, Bush has used judicial appointments to pay back his right-wing base, selecting appeals court judges like Priscilla Owen and Charles Pickering, whose beliefs are far to the right of the positions that he himself ran on. Tommy Fibich, a Houston trial lawyer who frequently represents groups of people suing pharmaceutical companies and other corporations, calls Owen "anti-consumer" and "the most conservative judge ever to come out of Texas." It's an opinion shared by some Republicans -- in one abortion case, White House counsel Al Gonzales, then Owen's colleague on the bench, called her position an "unconscionable act of judicial activism," since it stretched the meaning of the law to accommodate her antiabortion views.

Narrow control of the Senate allowed Democrats to defeat Owen in the Judiciary Committee. They did the same with Pickering, who, as a law student, wrote an article suggesting ways the state could preserve laws banning interracial marriage in spite of constitutional challenges. The Judiciary Committee has used procedural maneuvers to stall other nominees, including Michael McConnell, who has argued for a constitutional amendment banning all abortion.

Now that control is gone. And Fibich says Owen is "symbolic of the type of people the president is going to put up for selection to the federal bench." Indeed, the president says he's going to renominate her, and supporters expect his other picks to be even more extreme -- including those for the Supreme Court. "The president has not indicated his willingness to change the kind of nominees he wants to name because of the political extortion that's going on," says Thomas Jipping, senior fellow in legal studies at the right-wing Concerned Women for America. "I would expect therefore that he would nominate the kind of judge to the Supreme Court that he has been nominating to the lower courts. A Republican Senate will only encourage him more to stick with that course."

So far, Gerhardt says, Bush's nominees have been the most ideologically consistent of any president since Reagan. All are federalists -- those who would minimize the power of the federal government in favor of states' rights -- meaning they tend to be hostile to Congress's efforts to promote federal civil rights and environmental regulations. The overwhelming majority are antiabortion -- indeed, Schlafly says those in Bush's base expect an antiabortion litmus test to be applied to their president's picks. "We know that Clinton had a litmus test on that issue," she told Salon in July. "We've got a new administration now, and I think we're entitled to go the other way."

That has large implications for the way abortion is limited and regulated in America, among other issues. But what really terrifies pro-choice advocates is what will happen if any one of the Supreme Court's five supporters of abortion rights retires in the next two years. One of those supporters, Justice John Paul Stevens, is 82. Two others, Sandra Day O'Connor, 73, and Ruth Bader Ginsburg, 69, have suffered bouts with cancer.

If any one of them steps down in the next two years, says Gandy, it will likely mean the end of Roe vs. Wade. "I think it's gone," she says. "If we lose Sandra Day O'Connor, Stevens or Ginsburg and they are replaced by an opponent of Roe, which they clearly will be, then we have a 5-4 vote to overturn Roe."

"I see a juggernaut that is threatening to trample everything that we've fought for," she says.