The Democrats' devastating losses Tuesday may be linked to disenchantment among African-American voters. 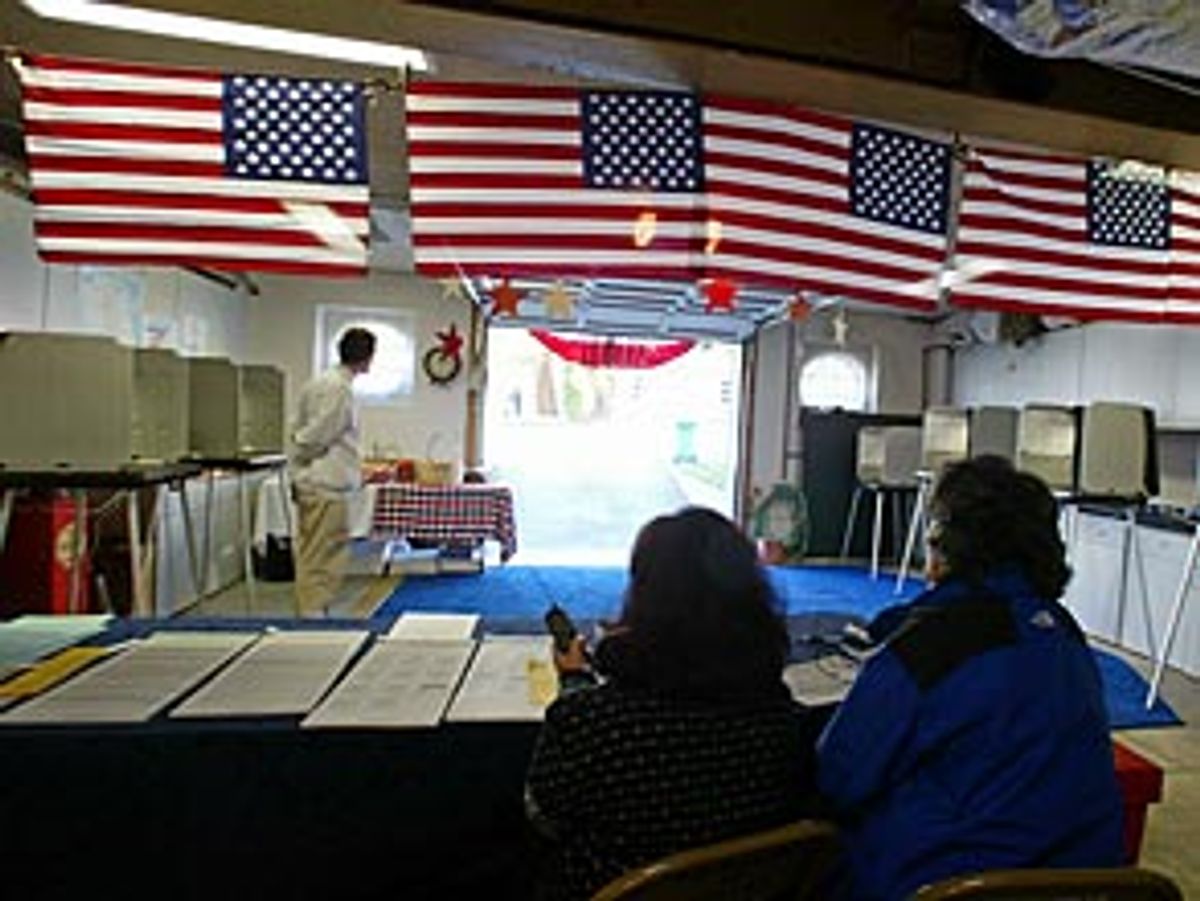 After riding a decade-long wave of strong voter turnout among fiercely loyal African-Americans, Democrats on Tuesday may have crashed to defeat in part because black voters weren't inspired by the candidates or the issues and failed to turn out in force.

"If the Republican base is energized and the African-American community is not, that spells disaster for Democrats in the South," says Morris Reid, a former aide to Ron Brown, the late secretary of commerce under President Clinton.

It's a disaster because in recent years, the winning Democratic formula in the South has been for candidates to win 95 percent of an energized black vote, while managing to pick up 42 or 44 percent of the white vote. But Democratic candidates who don't activate enough blacks to votes, as Tuesday's results may have illustrated, don't stand a chance in a region that's continuing its evolution into a Republican stronghold.

In a series of interviews with scholars, political operatives and black community activists, a troubling picture emerged for Democrats: The party is suffering from candidates who often don't relate to the black community, who don't campaign there aggressively -- sometimes for fear of alienating equally important white swing voters -- and who in general mishandle their relationship with the African-Americans. The absence of Bill Clinton, who forged an extraordinary personal and political bond with African-Americans, may also be hurting the party when it comes to turnout. All of those factors appeared to have been in play on Tuesday, where in county after county across the South, black support was solid but not enthusiastic enough to create Democratic victories.

"I think you can assume that African-American turnout was not what they thought it would be," says Democratic strategist and pollster Celinda Lake. "The other thing is that it looks like [white] born-again Christian turnout was high. They had been declining over the last 10 years, while African-American and union turnout has been increasing."

But the idea of Democrats pointing fingers at blacks does not sit well with some community leaders, suggesting that the longtime allies have some tension to resolve in the months ahead. "I'm baffled to hear people think it's the black vote that's the difference," says Democratic strategist Donna Brazile. Pointing to Democratic wins in Arkansas, Pennsylvania, Michigan and Tennessee, she said flatly: "The black vote was very powerful on Tuesday."

Because of a breakdown in the exit polling system this year, firm answers to crucial questions about voter turnout will not be known for months. Immediately following elections, the Voter News Service usually releases its extensive exit poll information, including a detailed analysis of voter turnout. This year, though, the service announced it was not comfortable with the accuracy of its polling and refused to release the data. Instead, researchers will have to wait for the U.S. Census Bureau's survey of voter characteristics, due out in six to 10 months, to see definitive turnout data.

Still, some initial statistical and anecdotal evidence points to an underwhelming showing among blacks in key Southern states. For instance, strategists for Bill McBride, the Democratic candidate for governor in Florida, knew they needed a big African-American showing to have any chance of beating Republican Gov. Jeb Bush. They were hoping that in Florida's three big, urban counties -- Broward, Palm Beach and Miami-Dade -- turnout would hit 65 percent. Instead, state returns show it hovered around 45 percent.

In the end, even a 65 percent turnout wouldn't have helped McBride, who lost badly to Bush. But in a handful of close races in the South, like the campaign for governor in Alabama or the Senate campaign in the border state of Missouri, where Democrat Jean Carnahan lost by just one percentage point, more black voters could have staved off the Democrats' debacle.

"If Jean Carnahan had spent more time in the last two weeks of the campaign mobilizing the black vote we could have amassed enough votes for her win," says pastor B.T. Rice, with New Horizon Christian Church in St. Louis.

Like most Democrats running for the Senate on Tuesday, North Carolina's Erskine Bowles enjoyed overwhelming support from blacks in published preelection polls. Yet his Republican opponent, Elizabeth Dole, actually won several major metropolitan counties with sizable minority populations. To many analysts, that indicates the black turnout was not strong.

In Georgia's race for governor, the evidence is somewhat ambiguous. DeKalb County, which includes Atlanta, is 54 percent black; Democratic candidate Barnes actually did better in '02 than he did in 1998, increasing his margin of victory there by 16,000 votes.

But elsewhere, particularly in smaller counties, the news was not as good. In Baldwin County, which is 45 percent black and which Barnes carried in 1998, his vote tally fell 26 percent on Tuesday and he lost the county to his Republican challenger, Sonny Perdue. That same story was played out again and again in Georgia counties such as Coffee, Crisp, Dodge, Toombs and Worth. Each has a black population of 30 percent or more, each voted for Barnes in 1998, and each county went Republican this time. With no evidence that blacks suddenly switched parties, analysts assume that black turnout was not high or was simply overshadowed by a heavy Christian conservative showing.

It's important to note that Barnes in Georgia lost the white vote, too. Chattooga County, which the Democrat won in 1998, is just 11 percent black. But on Tuesday, Barnes' vote tally there dropped 34 percent compared to four years ago. (Barnes upset many rural whites by pushing through the Georgia Legislature an initiative to shrink the Confederate battle emblem on the state flag.)

For some African-American leaders, that raises a point of caution: Tuesday's disappointing results were not just about blacks. "Black and white, it's like mashed potatoes and gravy," says Brazile, Al Gore's former campaign manager. "But you need the mashed potatoes first. Unless you have substantial white support, the black votes won't make it on their own."

"Democrats lost five governor races in states with all white voters," adds David Bositis, senior political analyst at the Joint Center for Political and Economic Studies. He was referring to Tuesday losses in Hawaii, Idaho, South Dakota, Vermont and New Hampshire. "You can't evaluate black turnout in a vacuum."

Still, what's so frustrating for Democrats who suspect the African-American turnout was low is that it represented such a dramatic change of fortune. In 1998, heavy turnout among blacks helped elect Democratic governors in Georgia, South Carolina and Alabama, and a Democratic senator in North Carolina, breaking strong GOP momentum in the region.

Black turnout was never a problem for Democrats when Clinton was president. Embraced as one of their own, Clinton enjoyed remarkable support from African-Americans, many of whom not only embraced his progressive agenda of job creation, but also his Southern background and hardscrabble upbringing. That loyalty was demonstrated in 1998 when they rallied around his impeachment battle by showing up in force on Election Day.

"These wealthy attorneys and bond traders who become Democratic candidates today, they don't have the affinity with blacks, the experience to relate to them like Jimmy Carter and Bill Clinton did," says University of Georgia political scientist Charles Bullock. "They had Southern, small-town experience."

If many blacks did stay home on Tuesday, perhaps it's because they were turned off by perceived snubs from Democratic officials. In North Carolina, former investment banker Erskine Bowles defeated an African-American in the primary and then never made a comfortable, public peace with the black community. In Florida, McBride cut a similar profile: a white, middle-aged, wealthy attorney, and in his primary race against Janet Reno, he essentially conceded the black vote to her. Then, when he'd won the nomination, he passed over black candidates for lieutenant governor and picked a white running mate.

Strategists suggest the choice was made in hopes of winning over white swing voters. Blacks, meanwhile, watched and fumed. When McBride finally campaigned with Clinton in African-American communities four days before the election, it was too little, too late.

"You cannot be a viable Democratic candidate today by being a Johnny-come-lately to the African-American community," says Reid. "Bill McBride never built a relationship with that community so African-American leaders in Florida didn't know who he was."