Harold Ford crusades to save the Democrats

The conservative young congressman is challenging Nancy Pelosi for House minority leader, but his attack on the popular liberal could backfire. 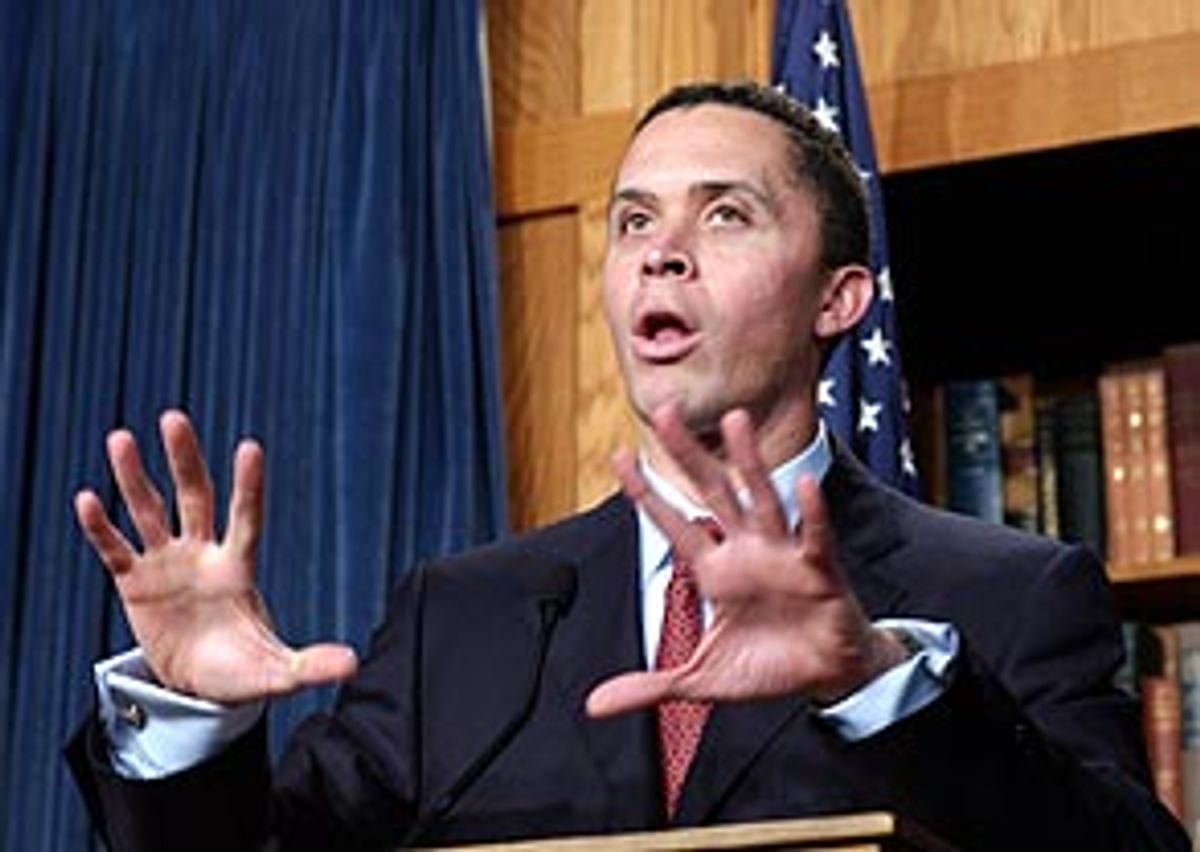 With Democrats relegated to the sidelines of power by the GOP's midterm election triumph, the race to succeed Rep. Dick Gephardt, D-Mo., as House minority leader may be as much excitement as the party sees until its 2004 presidential contenders step forward.

Early Friday, it looked as though it wasn't going to be much of a race. Rep. Nancy Pelosi, D-Calif., the current No. 2 in the House leadership, seemed poised for a promotion. Her chief rival, Rep. Martin Frost, D-Texas, conceded as much, dropping out of the race on Friday, and throwing his support behind her.

In a 6 a.m. phone call, which Imus took live on his nationally syndicated radio program, Ford announced that he would challenge Pelosi for the top spot. The ambitious Ford is an anomaly in several ways: at 32 the youngest Democrat in Congress, he is also perhaps its most conservative black member, as attested by his membership in the conservative group the Blue Dogs. Ford was among those who appeared on the White House steps with President Bush to voice his support for the resolution authorizing force in Iraq. He is also the only member of Congress to make People Magazine's list of 50 sexiest people, in case it turns out beefcake is what the Democrats need to reverse their recent decline.

Pelosi, a liberal from San Francisco who preferred to describe herself as an "Italian grandmother" Friday, did not seem particularly shaken by Ford's late challenge. As Ford railed against Pelosi as "a staple of the leadership" that needed change, Pelosi fired back.

"Well, I've been in office eight months," she said. "I guess when you're very young, eight months is a long time."

But clearly Ford's challenge has not created much love between the two. Ford said he spoke to both Frost and Pelosi Friday, calling his discussion with Frost "brief, but not unpleasant." When asked to characterize his conversation with Pelosi, Ford simply smiled and said he would "keep the conversation private."

The Tennessee Democrat was not as coy about his criticism of Pelosi, calling her "a throwback" and characterizing her style as one of "destructive opposition. We need leadership that is constructive, and not destructive and obstructive," he said. Ford sounded a bit like Ross Perot in 1992 Friday, touting his candidacy as the true avatar of change. He offered himself as "something new and different," a break with "the same old ways of the past," without delving into specific ways in which his leadership would be different than Pelosi's.

Ford's harsh words could be the script for Republican attack ads against Pelosi if she defeats her upstart challenger. But that could alienate even moderate Democrats. Some say Frost's sharp attack on Pelosi after Gephardt announced he wouldn't seek reelection cost him some support from ideological allies who nonetheless questioned the wisdom of savaging the popular Pelosi in terms that could help the GOP.

With the party in disarray after Tuesday's defeat, some have pointed to the race to replace Gephardt as the first test of whether Democrats will tack left or hold to the center as they approach the 2004 elections. First with Frost, and now with Ford, a race between a Southern moderate and a San Francisco liberal has been billed as the first sign of whether the party will, as some have suggested, move left as a way to galvanize its base in the wake of Tuesday's losses. But Pelosi, a prodigious fundraiser who campaigned tirelessly for other Democrats this fall, boasts support from members across the ideological spectrum. At least one moderate Pelosi backer called the ideological differences "a red herring."

"It's not a matter of left or right, it's a matter of having a core message that we can rally around and organize around," said Rep. Adam Schiff, D-Calif. "And nobody's a better organizer than Nancy Pelosi."

Not surprisingly, Ford disagrees. He says the struggle for the ideological soul of the Democratic Party will be played out in his race against Pelosi. "I don't think Nancy Pelosi's kind of politics is what's needed right now," he said. "Nancy's message, and the course she wants to take us on is not where America wants to go."

Ford's leadership challenge comes as Democratic presidential contenders are also beginning to jockey for position. And since Ford was the choice of fellow Tennessean Al Gore to give the keynote address at the 2000 Democratic National Convention, Ford was sensitive to any suggestion that he was some sort of Gore proxy. When a reporter asked him Friday if he had met with family or advisors before making his decision to run, Ford cut him off.

"I know where you're going with this, and let me just say, the vice president and I have not talked in weeks."

In fact, it's not clear who, if anyone, is behind Ford's late entry into the leadership race, though his politics are closer to the moderate Democratic Leadership Council than Pelosi's are. DLC spokeswoman Karen Coleman was mum on the race Friday. When asked if the group could live with Pelosi as leader, Coleman said simply, "We're not going to comment," and then added, "right now."

Some suggested Ford's last-minute decision was a freelance move by an ambitious young up-and-comer who is expected to run for Senate in four years, and is known to harbor presidential ambitions too.

Most Democrats think Ford's challenge is too little too late. The handful of members and Democratic staffers contacted by Salon Friday supported Pelosi's claim that she already has commitments of support from over half the caucus. But somewhere in the back of her mind, as Democrats prepare to vote for their new leader by secret ballot Thursday, Pelosi must be haunted by the ghost of Phil Burton.

In 1976, Burton, who served in the San Francisco congressional seat Pelosi now holds, believed he had enough votes secured from his caucus to become House majority leader. As voting day approached, the race between Burton, a San Francisco liberal, and Rep. Jim Wright, a moderate from Texas, came down to the wire. Burton wound up losing that race by a single vote.

But Pelosi certainly appears to have this race in hand. Some Democrats speculated this week that perhaps Pelosi's gender could work against her. The San Francisco Chronicle quoted a legislative aide saying, "There are some people here who probably don't want a woman as the No. 1. They are comfortable with women in the No. 2 position." Presumably, though, such folks might also have a hard time electing a black leader. It's also possible that members of the Black Caucus, many of whom have committed to Pelosi, could be motivated by the prospect of elevating Ford to be the first black to lead the caucus, though most caucus members are to Ford's left.

If Ford is to have any chance of pulling an upset, he will need the help of fellow moderates like Rep. Cal Dooley, D-Calif. Ford mentioned Dooley as one of the members he had spoken to Friday, and as a potential supporter. But a Dooley spokesman said late Friday that Dooley had committed to Pelosi before Ford ever entered the race. Whether that commitment to Pelosi, and others like it, will be honored in a secret ballot will only become clear after the votes are counted for the leadership post on Thursday.