Pulling the trigger on Saddam

In Quest for Hussein, you can invade Iraq all by yourself. But is ousting this evil dictator worth the effort? 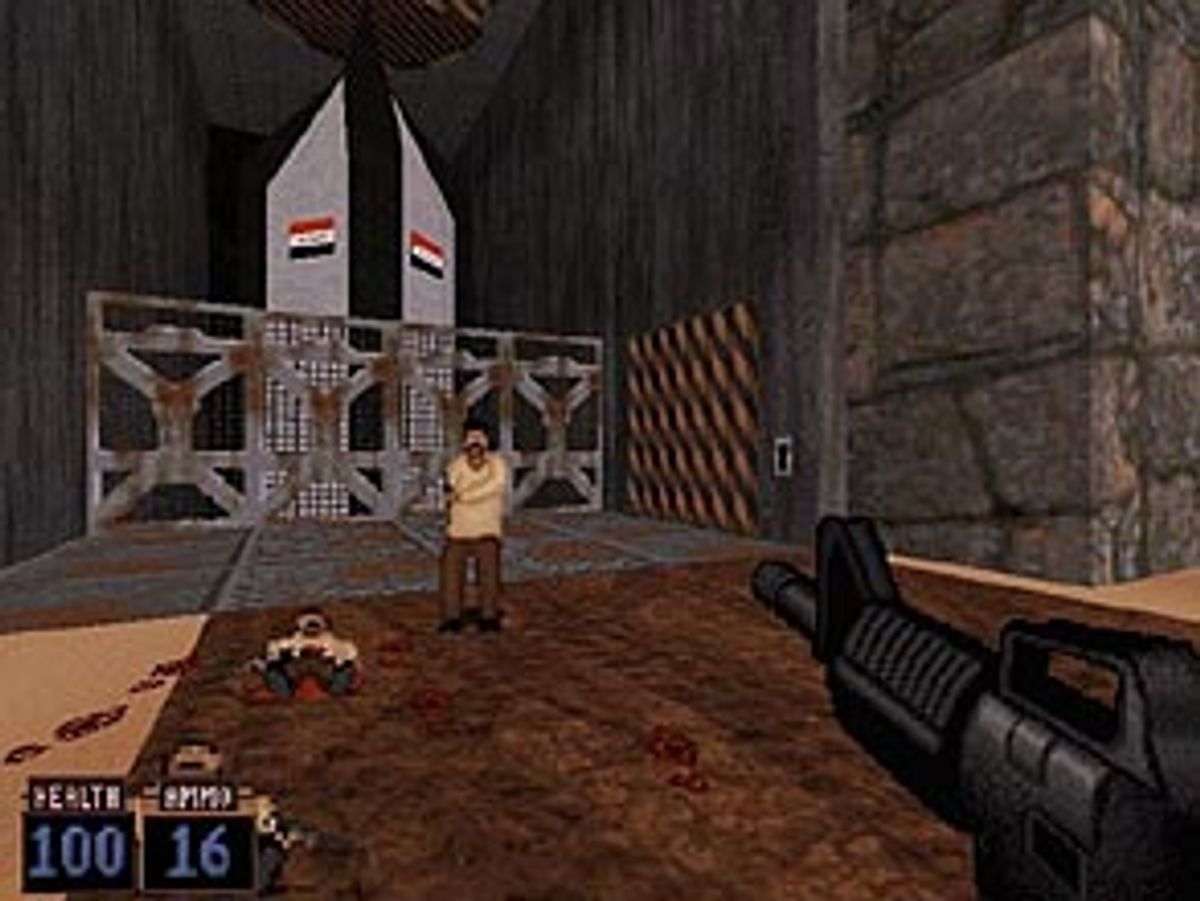 In Quest for Hussein, a new video game for sale on the Web, Saddam Hussein isn't much of a threat to world peace. The Iraqi dictator isn't close to acquiring weapons of mass destruction; indeed, his henchmen don't have anything worse than AK-47s, and they're not even especially good shots. Iraq is in ruins, a vast desert wasteland populated by stoic camels and abandoned buildings adorned with murals of Saddam. There's not even a U.N.-authorized international force assigned to bring about "regime change." Only one tough guy is charged with that job -- you.

The Quest for Hussein was designed by Jesse Petrilla, a 19-year-old who lives in Malibu, Calif. The game is similar to Quest for Al-Qa'eda, which Petrilla created a couple of months after Sept. 11, 2001, at a time when many game makers and others on the Web were building clever ways for Americans to show Osama we wouldn't take what he did lying down. In the swirl of grief and desire for retribution that gripped the country after the attacks, Flash animations of a snickering bin Laden being bombed and treacly MP3s recorded in the garage flourished all over the Web. During that period, Petrilla's al-Qaida game achieved enormous success. He says it was downloaded almost 2 million times.

Petrilla's Saddam Hussein game is a sequel to his Osama bin Laden game, in the same way, perhaps, that some in the Bush administration have painted a war in Iraq as the logical second step to the one in Afghanistan: The two enemies are distinct yet are purportedly vaguely connected. The gameplay is largely the same, with the goal -- trouncing evil -- identical. But Petrilla's own goals have changed. He created the al-Qaida game and distributed it freely, he says, as a way to "give Americans an outlet to express their emotions." He thinks that the Saddam game will be similarly cathartic, but this time he wants people to pay for the experience. Quest for Hussein costs $3.95 per download, which Petrilla bills as a 60 percent savings over the "regular price" of $10. (An undetermined portion of the revenue will go to the Red Cross, Petrilla says.)

Will people pay for the virtual chance to blow away Saddam? The world order may hang on that seemingly trivial question. Petrilla, who sounds like a smart, nice kid with a head for marketing himself and his achievements, thinks that if many people consider Saddam so evil that they want to topple him, then many people will buy a game to do that online. People will especially want to do this, he says, when the war in Iraq begins.

But Petrilla's potential market of would-be Saddam killers is probably smaller than those willing to line up to whack Osama. The news of possible war in Iraq, so far, has mostly been a complex and delicate geopolitical dance, a series of speeches fraught with diplomatic qualifications that have produced, in the American people, nothing like the angry response to al-Qaida after Sept. 11. Maybe that's because it's early yet. But maybe not; maybe the response to Petrilla's game and to other works that attempt to skim some cash from the froth of war will tell us something about whether Americans think Saddam is in the league of al-Qaida, or whether he's just another video-game bad guy.

Jesse Petrilla began creating mods -- independently created games that run on rendering "engines" made publicly available by other game designers -- a few years ago, when he was still in high school.

His first game was Plunder & Pillage, in which, according to Petrilla's site, the player is "a renegade pirate who must fight his way through gangs of enemy pirates, plunder your way through enemy villages, and pillage everything in sight in an attempt to regain what was lost at sea and gain a name for yourself as the most notorious pirate on the high seas!" After Sept. 11, however, the American appetite for plunder and pillage ebbed, and Petrilla, who had just graduated from high school and has always dreamed of one day creating a software company to rival Microsoft (actually, to "drive Microsoft into the ground"), knew that his success depended on a game tailored to the mood of the day.

"I didn't want to profit off the terrorist attacks," Petrilla makes clear about Quest for Al-Qa'eda. That's why he gave the game away for free. But he also figured that he could make a name for himself by striking while the loathing for bin Laden was fresh, and he expected to generate some media buzz.

That's exactly what happened. In April 2002, a local newspaper -- the Auburn Journal, in Auburn, Calif., where Petrilla lived at the time -- wrote an isn't-this-kid-precocious account of Petrilla and the game he created. It was the type of odd news story that strikes a chord, for the local NBC affiliate quickly picked it up, and "from there it went nuts," Petrilla says.

Looking at the game now, it's obvious that Quest for Al-Qa'eda became popular more for its core gimmick -- the online chance to right an off-line wrong -- than for its gameplay. Based on the Build engine, used in Duke Nukem 3D, Quest has a late '90s graphical look and feel, a grainy, boxy appearance out of step with the sleekest new games. Serious gamers probably dismissed it right away. (There were a few commercial titles to suit their tastes.)

Many of the creative works inspired by Sept. 11 had a similar amateurish tone. There was a Java applet that let you warp Osama's face, and Bin Laden Bowling, a Flash game in which one bowls down Taliban bad guys, and many such others. EBay was choked with Osama bumper stickers and other trinkets, and every day, via e-mail, one would get some new song or Flash movie designed to tell Osama what we thought of him.

But in the months after Sept. 11 and military success in Afghanistan, demand for these works receded. Jack Ives, the chief operating officer of CyberExtruder, a company that created 3D bin Laden and Bush figures for use in Unreal Tournament, says that while the figures are still in demand, they're nowhere near as popular as they once were. (Now, the company is using "the same technology that we used to create game characters to protect the security of our country," Ives said -- the firm creates 3-D visual templates of known terrorist suspects that can be used to determine identities of people at airports and other public places.) Petrilla, too, acknowledged that his al-Qaida game doesn't seem to be very popular these days.

When President Bush began talking about Saddam being next on his list, Petrilla saw a new opportunity to create a game. In truth, he says, it wasn't very difficult. It took him only a few weeks to build Quest for Hussein, since all he had to do was replace the Afghanistan scenery with Iraq scenery. For his maps, Petrilla consulted some pictures of Iraq; he envisioned Baghdad as a place with "lots of trash," he says, where "everything's run-down."

Petrilla concedes that his games aren't very professional-looking (that will come, he says, after he creates his own company), but he says they do offer a chance for Americans to let out their foreign-policy frustrations. Everyone knows that Saddam Hussein is a threat, he says. "He is a villain and Americans definitely don't like him."

Petrilla knows that Americans differ on how to deal with the threat posed by Saddam, but "I think we all want him out of power," he says. "Some people just don't know whether it's worth jeopardizing all those lives."

In this way, Petrilla makes a clever pitch in support of his game -- it's for both Iraq hawks and doves! If you are lusting for war, you ought to get this game because you know the full threat that Iraq represents. And if you don't want a war and yet you know that someone needs to do something about Saddam, Petrilla's game is still for you, as it "makes it easy by letting you get him on a computer screen, without any blood."

Petrilla's Saddam game is not the only new game to play off a possible war. In October, Gotham Games released Conflict: Desert Storm, which re-creates special ops missions from the first Gulf War.

The timing of the release of Conflict: Desert Storm could be called opportunistic, but the game -- which is $40 -- has been acclaimed for its depth and realism, and theoretically has more to offer experienced gamers than merely the chance to kill a dictator. Quest for Hussein, on the other hand, is, like Quest For Al-Qa'eda, only opportunism; from the moment the game starts -- with a screen of a weather report for Baghdad that promises tomorrow will bring a smothering, nuclear-induced 3,000 degree heat -- the whole thing feels a bit immature.

Immaturity might have been excusable in the immediate aftermath of Sept. 11, but as applied to ousting Saddam, it feels out of place: If you care enough about the threat Saddam poses to desire war, you're likely not a kidder about it, not someone willing to pay $4 for a game to let him have it. And if you don't care about Saddam and believe he's no threat, you won't get the game either. Even if most Americans do support a war in Iraq (according to polls), there's no societal groundswell of anti-Saddam sentiment, and unless Saddam does something to Americans on the order of Sept. 11, it's hard to see how there will be. Saddam seems to be regarded as something of an ineffectual evil guy -- the kind of guy who pops up in episodes of "Seinfeld" and "South Park."

Kurt Squire, a research manager at MIT's Games-to-Teach Project and an expert on games, says there's nothing new about video games giving people an opportunity to take on real-life villains. Games and war naturally fit together, and he notes that this seemed to be most true during the Cold War, when all sorts of American games positioned Russians as the enemy.

But Squire considers the new phenomenon of do-it-yourself villain insertion "juvenile and 'South Park'-ian," he said. There is some truth to the argument that "one of the reasons people play games is they want to get rid of their frustrations," he says, "but I tend to look at any kind of entertainment as a break from life. Is this the one way people may deal with the stress of war? Maybe, but I don't think it's the only way."

From a strictly business perspective, it would seem odd for Petrilla to go after Saddam when there is still no worldwide popular outrage against him. And in fact, Petrilla says, he realizes there are other opportunities out there, and he won't just stick with Saddam: "As long as the news keeps throwing me enemies I'll keep doing it."

What about George W. Bush? Internationally, many people think of the American president as being at least as dangerous as Saddam Hussein. Would Petrilla ever build a Quest for Bush?