America's public enemy No. 1 has suddenly reappeared -- and the White House doesn't care. 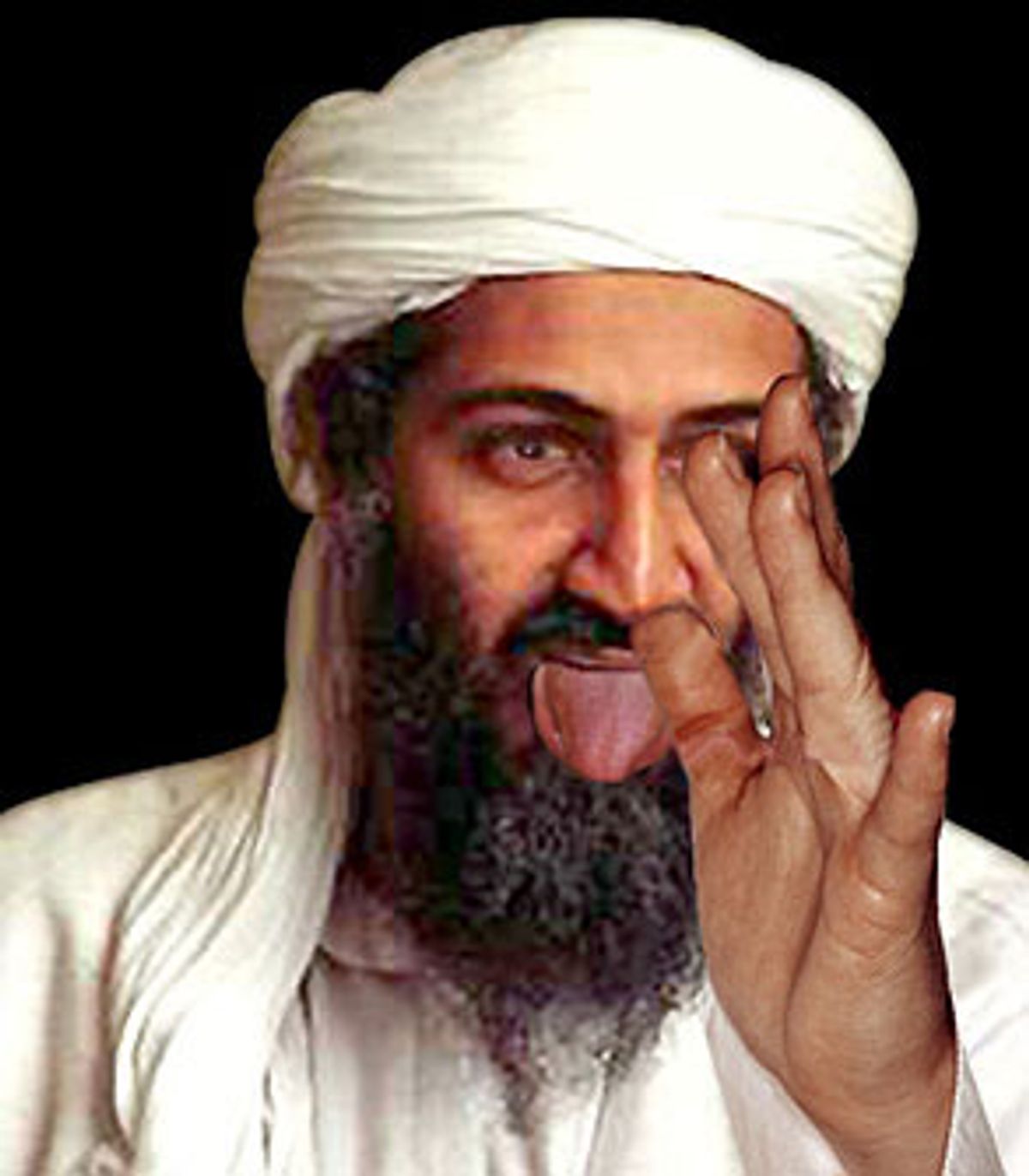 "This is about more than any one man," said Scott McClellan when asked Wednesday afternoon about the alleged bin Laden tape.

Why does the White House spokesman's response to the reappearance of Osama bin Laden sound so flaccid? When did the world's most wanted terrorist become "any one man"? Whatever happened to "dead or alive"?

From where I sit in New York, those are the salient questions, as the government's analysts reluctantly face the likelihood that the voice on the al Jazeera audiotape belongs to the man who masterminded Sept. 11 -- and that all the optimism previously expressed about his demise had no basis.

In flowery phrases, bin Laden praises the carnage in Bali and Moscow, and warns the world that they are coming to kill more of us, everywhere. Yet we hear no heated vows of justice from the White House. The president and his spokespersons don't even mention the murderous Saudi construction heir by name anymore. The substitute press secretary assured the press that "any time we hear a tape like this, where someone, no matter who it is, threatens the world ... We take that very seriously." The president likewise spoke in a bland, almost hesitant tone. "Whoever put this tape out has put the world on notice yet again that we're at war and that we need to take these messages very seriously," said Bush. "And we will."

No matter who it is? "Whoever" put this out? If that isn't bin Laden on the tape, there is little reason to take it "seriously." Who spoke on that tape matters very much, as the president surely knows. And if it is bin Laden, that raises some issues that the White House prefers to ignore at the moment.

So the White House press office continues to suggest that bin Laden is just another "evildoer." It is the same line they have spun out since late last winter, when the al-Qaida chief is believed to have escaped from Afghanistan.

The president's spokesmen no longer uttered his forbidden name, Cabinet members suggested that he was probably dead, and the president himself claimed that the enemy's existence "really doesn't matter that much."

This effort to downplay bin Laden has worked so well that otherwise intelligent observers now shrug him off as if he were just another generic villain in a video game.

"Let's say he's alive. How much should we care at this point?" asks Howard Kurtz, the Post sage who so effortlessly expresses the conventional wisdom of the capital. Note his nonchalant attitude, which is more significant than his words. "How much should it distract us? Isn't it more important to deter future attacks than to obsess on bin Laden? Isn't it more important to take on Iraq's pursuit of nuclear weapons? Or is bin Laden's status as a hero to radical Islamics [sic], as an inspiration to future terrorists, worth whatever resources it takes to try to hunt him down?" According to Kurtz (who introduced the subject by calling bin Laden "a blast from the past"), those "are not easy questions."

Actually, those questions are so simple that it is amazing anyone asks them.

I realize how inconvenient it is that bin Laden would show up again at this point, when Saddam Hussein has just agreed to renewed U.N. weapons inspections. (Has it occurred to anyone that al-Qaida may seek to exploit an invasion of Iraq to expand its jihad throughout the Middle East? At least one thoughtful conservative has figured it out. I suppose that doesn't matter either because bin Laden is just "one man.")

I know the White House is frustrated and embarrassed by its failure to fulfill the blustering threats Bush made last year. (Their frustration may be relieved slightly by imagining how the punditry would have treated Bill Clinton if he had failed to take down bin Laden by this point. That "dead or alive" clip would be playing every night on cable, with appropriate commentary.) And I can see why he, Cheney and Rumsfeld prefer to pursue a sitting duck like Saddam rather than the elusive Osama.

What I don't understand is the implied contradiction between the urge to "obsess on bin Laden" and the need to "deter future attacks." Iraq hasn't attacked the United States, and to date nobody has provided any proof that the Baghdad regime possesses the capability or the madness to do so. Al-Qaida has attacked the United States more than once, killed thousands of our people and grievously injured our country, and this tape provides more proof, as if there were not enough already, that its leaders intend to do so again and again. What I cannot understand is why anyone with an audience in America would shroud that reality for the comfort of the Bush White House.

Sorry, but Osama bin Laden is not merely "any one man." He is the self-proclaimed mass murderer of the World Trade Center and the Pentagon, at large, presumably armed, and extremely dangerous. To pretend that Saddam Hussein poses the greater threat -- when he has been contained for a decade - is to foster a truly monumental delusion.