The case of the confusing bookstore

It takes the skills of a great detective to find the best mysteries among the new releases. Our critic offers his list of some recent gems. 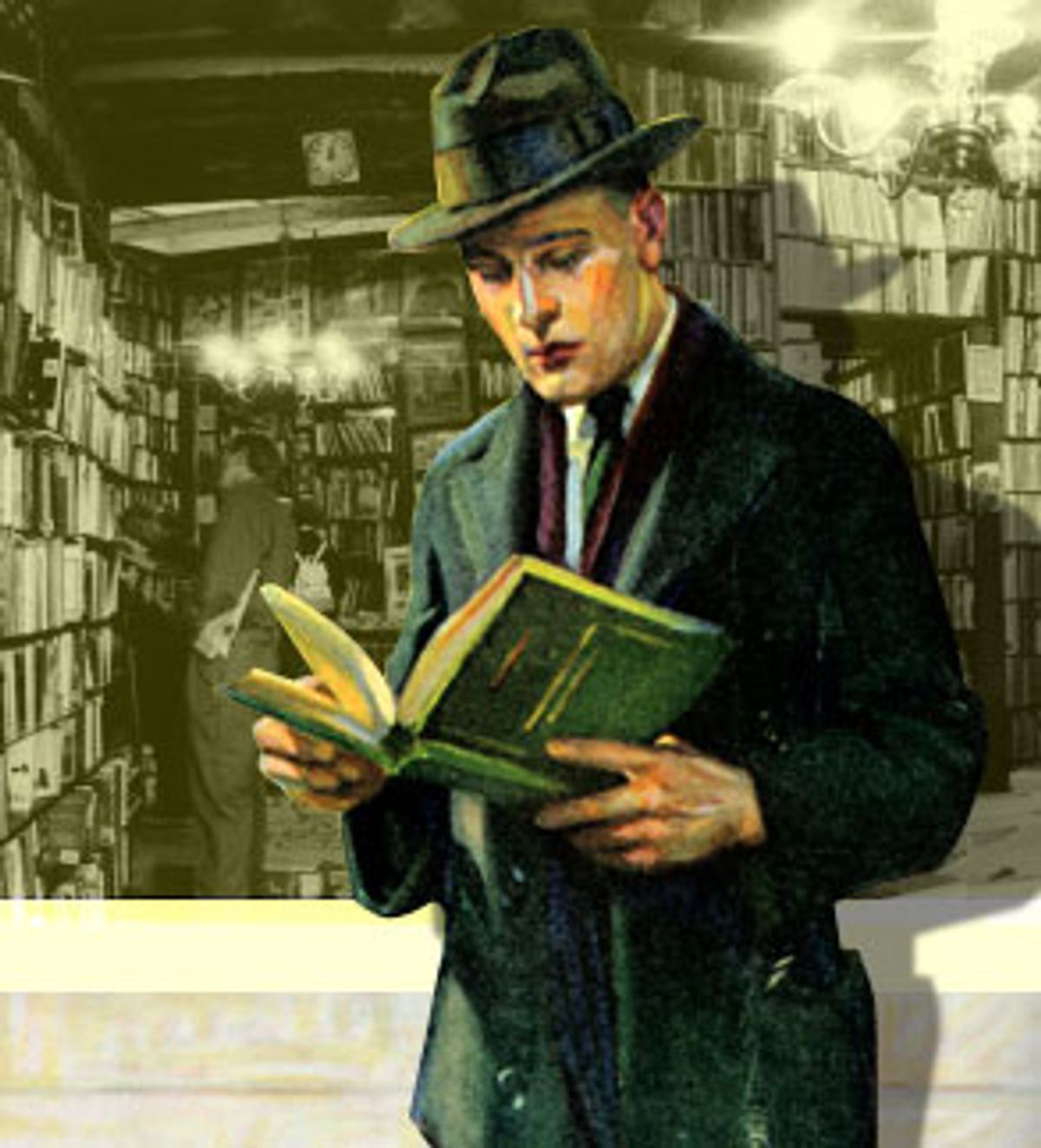 You know how it is. You stop by your favorite mystery bookstore to find out what's new and you're confronted with dozens of choices, all of them bearing blurbs (some perhaps from your favorite mystery writers) assuring you that this is just the thing you've been looking for. But how do you separate the good hard-boiled writing from the Chandler manqués? Or, if you prefer comic mysteries, how can you tell the writers who are truly funny from the ones who are merely cute?

This column, which will appear in Salon occasionally, makes no claim to be comprehensive; my tastes may not be yours. What I would like it to be is the equivalent of one of those conversations that never seem to happen in the huge superstores, the chance encounters that are increasingly the province of niche bookstores. You run into a stranger and start talking about what you've been reading, trading recommendations or warnings. Think of this column as a periodic report from a fellow mystery reader (who can feel as overwhelmed by what's available as you do) on what he's liked in the last few months.

And I'd also like it if readers took the opportunity to share their discoveries with me. Conversations with strangers have provided me with some great leads on things I would have otherwise missed. I can't cover everything. But part of the pleasure of reading is being able to share your current enthusiasms with others. I'll be your informant if you'll be mine.

The critic Peter Guralnick called James Carr the greatest of all soul singers. To anyone who's ever heard him, he is certainly the most terrifying. What you encounter in Carr's voice is an emotional outpouring so total, so naked that the madness he slipped into at the height of his career sounds only too plausible. Listen to Carr's cover of the Bee Gees' "To Love Somebody" or his version of "The Dark End of the Street" by Chips Moman and Dan Penn, Carr's biggest hit and the source for the title of Ace Atkins' new mystery, and you find yourself wondering how this man will get out of the song alive.

In "Dark End of the Street" Carr's music is such a powerful vortex that anyone who ever heard it, anyone who knew him, anyone who crossed paths with him at one time or another finds their lives in danger. In its way, Atkins' novel, the third and (so far) finest in the Nick Travers series, is a rebuke to the notion that art is or should be enriching, comforting, therapeutic. In this book, art can kill you, and that is part of its greatness.

The Carr figure here is Clyde James, a soul singer who disappeared after recording a few hit sides in the '60s and who may or may not still be alive. Whether he's dead or still breathing, his absence hasn't kept him from haunting the lives of the people who knew him, including his sister, Loretta Jackson, who hires Nick to find him.

Nick is a great conceit of a hero: a former pro football star, a current professor of blues at Tulane and a part-time P.I. Loretta and her husband, JoJo, are Nick's spiritual parents and their bar is his truest home. Nick is hard-boiled without being a macho fool about it, and you can say the same of his creator. Atkins writes good, solid hard-boiled prose, with just enough of the smartass in it to steer clear of mannerist pastiche and enough sharp description to give his passages a lyrical punch. (One caveat: It's not a good idea to read Atkins on an empty stomach since his frequent descriptions of Southern cuisine can start your gastric juices rumbling like a Gene Krupa solo.)

What every character in "Dark End of the Street" shares, from the heroes to the villains, is that they've all been marked, for better and worse, by music. There's a hit woman named Perfect Leigh who got her name from her mother mishearing a Rolling Stones' line. Creepiest of all is "Jon Burrows," an Elvis-worshipping hit man who believes himself to be Elvis' dead twin, Jesse Garon. Atkins doesn't use this character for some sneering swipe at poor white Southern culture. For one thing, as a son of the South himself, he's all too aware of how that culture has been dismissed as trash. But he does dig right into what's creepy about the Elvis-as-Jesus mind-set. A lot of people have played with the idea of Elvis risen from the dead in some unholy incarnation, none of them with the black humor or the menace Atkins captures.

But it's the spirit of James Carr who hovers over every page of this book, as if that great tortured voice, or even the memory of it, were scanning the territory like spotlights after a jailbreak. It's Atkins' tribute to Carr that none of the characters escape its reach.

Michael Connelly is one of the best of the current crop of American hard-boiled writers, but halfway through "Chasing the Dime" I began feeling that Nancy Bartholomew's series of feather-light comic mysteries featuring the Florida stripper Sierra Lavotini had him beat for sophisticated outlook. Connelly can only think of the sex trade in terms of victims and users, and the worst part of the book is when he slides into the moralism that is the wheezing bane of hard-boiled writing.

Connelly's new book is about a computer whiz named Henry Pierce whose company is awaiting the financial backing to manufacture an invention that will revolutionize not just the computer industry but plenty of others as well. Moving into his new apartment, Henry finds that his phone number used to belong to a woman working for an escort service, and he is still receiving calls from her clients. Bored, anxious to take his mind off work and more than a little naive, Henry tries to contact her, realizes she's gone missing and is soon under suspicion from both the cops and his co-workers.

"Chasing the Dime" is Connelly's second novel this year, following "City of Bones," which looked as if it was the beginning of the end of his books about L.A. detective Harry Bosch. Maybe that caesura in the Bosch saga is what makes "Chasing the Dime" feel as if Connelly is marking time. It doesn't have the urgency of his best work, but it also avoids his tendency to work in one plot twist too many until the plausibility of his story falls to bits. (That was most notably a problem in "The Poet," otherwise his creepiest book.) Still, "Chasing the Dime" is well-plotted and it holds your interest, and it's easy to picture the book's high-tech shenanigans translating well to the screen. And nobody is going to argue with the revelation of who's behind the book's evildoing: It's a villain so many of us hate already.

As the modus operandi in serial killer procedurals grow more and more grotesquely baroque, the genre's tendency to fetishize those killers becomes more and more obvious. What's refreshing about the British comedy writer Mark Billingham's "Sleepyhead" is that this debut novelist comes up with a genuinely creepy premise without being unpleasant. More important, he doesn't lose sight of the victims.

The psycho in "Sleepyhead" is drugging young women as a prelude to inducing stroke, leaving them in a state of permanent coma. The most remarkable passages in the book are the inner monologues of Allison Willets, the killer's sole "success" (i.e., the only one of his victims who doesn't die -- she's conscious, but she can't speak and can barely move). It's here that Billingham shows his knack for comedy. Allison's voice has a "what next?" exasperation that manages to be darkly funny without slighting the horror of her situation.

Allison's doctor, Anne Coburn (one of those smart, ultracompetent, no-nonsense women that some mystery writers are so adept at and whom readers love), devises a way of communicating with Allison involving the young woman blinking her eyelids. Allison remarks: "Just call me the Amazing Performing Eyelid Woman! Only I can't sodding well perform, can I? ... I was screaming at my eyelids inside my head. It felt like the signal went out from my brain. But slowly. It was some dodgy old Lada beetling along the circuits, or whatever they're called ... It was on the right road and then it just got stuck at roadworks somewhere. Like it lost interest. I know I can do it but I haven't got any control over it. When I'm not trying I'm blinking away like some nutter, but when I want to I'm as good as dead." At their best, Allison's monologues have some of the otherworldly strangeness of the heaven sections of Alice Sebold's "The Lovely Bones."

The revelation of the killer's identity and motive are, frankly, a prosaic letdown after the extremity of the crime. And Billingham takes risks in making his cop hero, Detective Inspector Tom Thorne, so pigheaded and off track for most of the investigation, though it's easy to imagine Thorne becoming a companionable protagonist (the next of the Thorne books, "Scaredy Cat" is already out in the U.K.) and Billingham's control of character and plot becoming more sure. He's off to a remarkable start.

An outgrowth of the Web site tartcity.com, this collection of short stories by a lineup of some of the most prominent female mystery writers vindicates the site's exasperation with women characters as tokens or frail damsels in distress. The collection was edited by Stella Duffy, author of the Saz Martin mysteries, and Lauren Henderson, author of the Sam Jones mysteries, and they've managed to corral an impressive array of their colleagues to contribute.

Henderson's "Tragic Heroines Tell All" imagines Phaedra, Medea and Lady Macbeth spilling all on a talk show. The author's trademark cheekiness is in evidence but also a fine satirical idea: how the Oprah-ization of feelings and experience reduces grand passions to nothing more than piddling neuroses. Duffy's "Martha Grace" is a cruel and rather obvious object lesson redeemed by the sinister fairy tale mood. Among the other highlights are Jen Banbury's "Take, for Example, Meatpie," in which a mysterious and larcenous young woman moves from junior high to junior high, finding the most picked-on boy and providing him with a sexual education. It's not the follow-up to Banbury's debut, "Like a Hole in the Head," that some of us have been waiting for, but it's a sexy -- and pleasingly perverse -- entry.

Even sexier and much, much darker is Val McDermid's "Metamorphosis." In her introduction to the story McDermid says she has stayed away from writing about sex because it's so tough to do. Well, the only sweat that shows in "Metamorphosis" is the sweat covering the lovers' bodies. And the eroticism of McDermid's writing here is matched by the twisted ending, which has the muffled deadliness of a brick wrapped in a towel.