Idiocy of the week 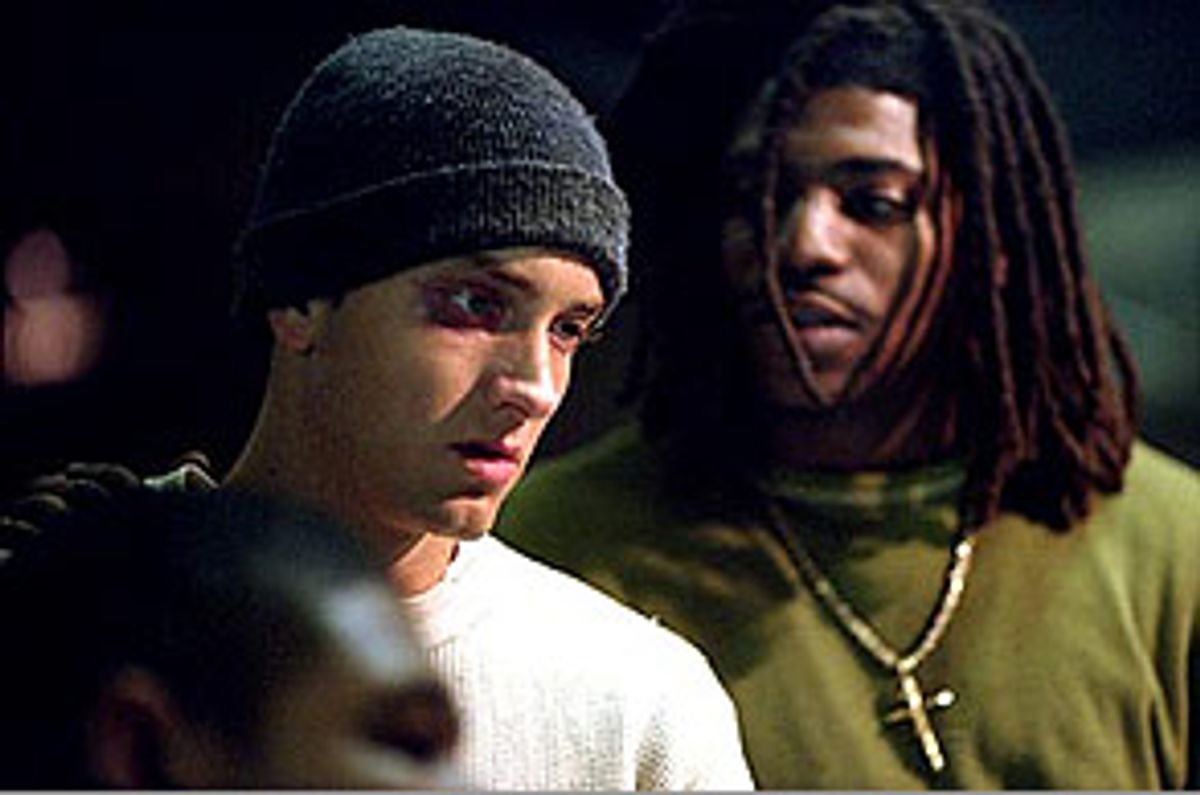 Something about Eminem tends to make fools out of people. The ironically challenged keep taking his bait -- from Lynne Cheney to the thought police at GLAAD. Others realize that this white purveyor of ghetto gore is culturally significant but, like Frank Rich, they can't quite put their finger on why. Still more are so terrified of being unhip that they readily sign on to anything positive about the little white boy who hates his mom. This week's idiocies of the week are both about Eminem.

The first is just a throwaway line by David Denby in the New Yorker. It's revealing because it shows -- like a small chink in a prison wall -- what the intellectual universe of someone like a movie reviewer for the New Yorker is really like.

"People who are convinced that Eminem is destroying America might want to consider the delicacy of the white-black friendships in '8 Mile,'" argues David Denby. I'm with him so far. Eminem indeed represents a very positive form of integration -- unforced, unvarnished, genuine and raw. But then Denby goes the extra step: "(Perhaps the specter of such friendships is what right-wingers actually hate the most.)"

The line is designed to have liberal New Yorker readers nodding in sympathy with Denby. It's a piece of simple credentializing. But what is he saying? It's OK to love Eminem, despite all the misogyny and homophobia in his lyrics, because some right-wingers hate him? And why do they hate him? Because he builds bridges between blacks and whites.

Where, one wonders, has Denby been? The main argument on the right these days is not white supremacism (I know that's news to Joe Conason, but then a lot of what's going on in the world is). And it's not segregation. Whether you agree with it or not, the conservative case against affirmative action, and other forms of racial engineering, is based on the doctrine of color-blindness, purloined from the liberals a couple decades ago.

If anything, the main opponents of racial integration these days come from the racial left. There's growing contempt for integration, a large constituency for separatism, and certainly, with respect to hip-hop, an assumption of inauthenticity among white rappers that Eminem, for one, had to overcome. In fact, black opposition to Eminem's emergence is one of the themes of the movie Denby watched. But why let reality get in the way when you can score a quick point off a mythical, racist "right-wing"? And in any case, can you imagine a sentence like "Perhaps the specter of such inter-racial friendships is what left-wingers actually hate the most" appearing in the New Yorker? Not likely.

But no one beats Richard Goldstein in this kind of arena. Obsessed with some equally mythical sexist backlash, Goldstein sees attack-queers and right-wing misogynists and sissy-phobes everywhere. The combination of Eminem's smash new movie and the country's historic electoral endorsement of George W. Bush was too much for the far-left columnist for the Village Voice. Here he goes again:

"Two events of lasting significance occurred last week: the breakdown of the Democratic party and the breakthrough of Eminem. His debut film, '8 Mile,' became the highest-grossing movie in America just days after Republicans won control of Congress. These two events may not seem related, but they both reflect the mainstreaming of ideas that seemed extreme just two years ago. Bush's right-wing agenda and Eminem's violent misogyny were once considered over the line. Now they have crossed over and become the line. Not that Em is a Republican (though he might favor ending the estate tax). But he and George W. Bush do have certain things in common. Both draw their power from the compelling image of the strongman posing as the common man. Both played the populist card to win the nation's heart. And I would argue that both owe their success to the sexual backlash."

Run that by me again? How about a simpler explanation: Eminem's music is some of the most challenging, inventive and lyrically brilliant in recent times. His movie -- and this became the conventional reviewing wisdom -- was an excellently written and directed product. There's no mystery why it did so well. And the timing is irrelevant. Eminem's commercial power has been proven for years now. As for Bush, the striking thing is how many women voted for Republicans this time around. Why is that evidence of sexual backlash? You can be sure that if the gender gap had widened and Bush had still won, then Goldstein would be making exactly the same argument (only he'd have a little more credibility). Bush's victory is, if anything, a sign that gender issues have been losing salience as men and women consider who can best defend us in the war on terror. But shhhh. Don't tell Goldstein. Part of the fun of reading some parts of the left these days is seeing just how out of touch they can really get. And in this respect, Goldstein is pioneering new ground every week.