All that you want to leave behind

U2 spent the '90s making rebellious music that strayed into weirdness and irony, but a new compilation sticks to the band's trademark earnestness. 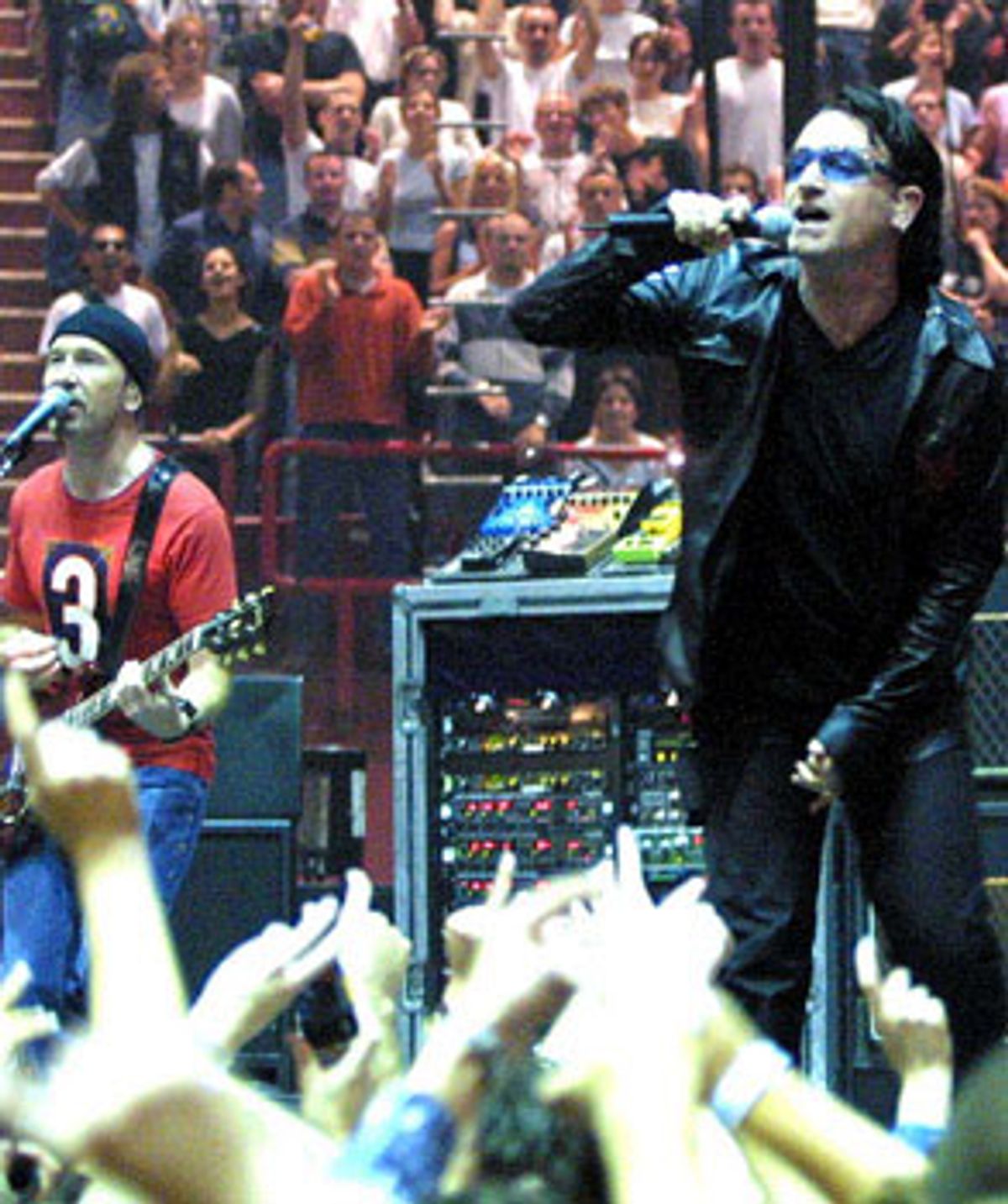 Underneath U2's patriotic flag-waving and global peacemaking, at heart the four lads still want to be rebellious Irish teenagers. What other explanation is there for what happened to them during the 1990s? During the '80s the band was scrappy and brash, steadfastly ignoring the plastic passion of new wave with politically charged idealism and tilting activism. After conquering most of the free world with "The Joshua Tree" in 1987, the band members fit comfortably into their roles as straight-faced rockers, saving humanity with soaring anthems and bleeding hearts on their sleeves.

Then, in their version of getting a tattoo, staying out all night drinking cheap beer and skipping out of gym class for a smoke, the foursome spent the next decade running away from a reputation. No longer the polite young men you could proudly take home to Mom, their very public descent into irony and weirdness was fascinating to watch. The band released the electro-buzzed "Achtung Baby" (1991) and Bono transmogrified into a debauched devil on the Zoo TV tour. On "Zooropa" (1993) the Edge mumbled the cold "Numb" to a keyboard line borrowed from proto-new wave band the Normals' "Warm Leatherette." And then there was the Popmart extravaganza, a Day-Glo train wreck of synthesizers, larger-than-life Golden Arches and a mechanized lemon -- a sort of experiential version of the kaleidoscopic and commercially sour "Pop" (1997). After the long-haired, doe-eyed earnestness and genuine faith of '80s warhorses like "With or Without You" and "Sunday Bloody Sunday," U2's winking excess and ironic, "Is this a joke?" sensibility were difficult to swallow.

All said, U2's "The Best of 1990-2000" should be less cohesive and a lot harder to digest than its predecessor, "The Best of 1980-1990." The techno-fried tracks on a bonus 13-song disc of B-sides that was packaged with "1990-2000" during the first week of release are certainly patchier. However, the 16 songs included on the single-disc A-sides compilation are surprisingly much tamer than the four full-length albums from which they are plucked. Call it revisionist history or selective remembering, but "1990-2000" has obviously been processed and manipulated through a massive earnestness filter. In a way, this collection exposes an all-new irony: That for all their slick-sell posturing, U2 was pretty serious all along. Or at least that's the intended message.

Instead of "Zooropa's" trance-inducing title track or the hectic urban chaos of "Lemon," we hear the dreamy, tick-tock lullaby of "Stay (Faraway, So Close!)" and a delicate, almost a cappella "The First Time." "Pop" is similarly pruned: The new mix of "Gone" is closer to the band's loose live version, minimizing squealing synths in favor of sparse piano chords and Adam Clayton's bass. "Staring at the Sun," often reworked into an acoustic tune in concert, emphasizes Larry Mullen Jr.'s drums and random dapples of guitar and synth high in its own remix, underscoring its desolate atmosphere. While first-rate compositions, both give little hint of "Pop's" messy bursts of mechanical fireworks.

Of course, some of U2's bizarre artifacts just can't be swept under the rug. The new version of "Pop's" glittery all-night party "Discotheque" -- heavier on the funk -- and a slightly tweaked remix of "Numb" both betray their automaton origins. And you wouldn't want to change a few relics, such as "Hold Me, Thrill Me, Kiss Me, Kill Me," their excellent "Batman Forever" soundtrack contribution that oozes lust, pulsing with a jagged riff.

This likely explains why all three songs from "Pop" appear remixed. Stripped away to chords and lyrics, "Pop" is quite possibly one of U2's most gut-wrenching albums; its cheesy electronics fail to hide the anguish of "Wake Up Dead Man," "Please" and "Mofo." But today it also seems like the musical equivalent of U2's goth phase, the band awkwardly trying out keyboards and vocal distortion like a teenager messing with fishnets, dyed black hair and the Sisters of Mercy.

In retrospect, U2 didn't waver as much as we thought during the Clinton years. For a rock band, they were properly unconventional -- even rebellious. Just as grunge rock began to grumble with angst, Bono stretched into the top of his vocal range on "Ultraviolet (Light My Way)." Later, their spate of "Achtung"/"Zooropa" remixes predated the short-lived electronica boomlet in the States by almost five years. And then, when boy band and Britney fluff infested the pop charts with disposable confections, U2 arrived with "All That You Can't Leave Behind," a no-frills rock celebration of guitars, bass, drums and vocals.

Oddly enough, there are only two tracks -- "Beautiful Day" and "Stuck in a Moment You Can't Get Out Of" -- from "Behind," both trumpeted as a return to their guitar-band roots. (What about "Walk On" and "Elevation," the epitome of the uplifting songs picked for "1990-2000"?) Maybe that's U2's mischievous rebelliousness peeking through serious passion. That would help explain the inclusion of "Miss Sarajevo," their collaboration with Luciano Pavarotti from the "Passengers: Original Soundtracks 1" fake film score album.

But judging from the flashy techno populating the bonus B-sides disc, U2 prefer to hammer home their defiant teenage outlaw side on this half of the collection. "Salome (Zooromancer Remix)" sounds vaguely like Duran Duran's "Save a Prayer" after an extended bit of chilly disco, while "Dirty Day (Junk Mix)" is an odd collage of sound with old pal Brian Eno on keyboards. "Even Better Than the Real Thing (Perfecto Mix)" and "Numb (Gimme Some More Dignity Mix)" are saturated with gospel choir vocals of early '90s house music, and "Discotheque (Hexidecimal Mix)" cribs a crash-and-burn synth echo from the Chemical Brothers' "Setting Sun." Only a few tracks -- in particular the hushed "North and South of the River" and "Your Blue Room" -- tone down the frenzy for more solemn reflection.

While not terribly groundbreaking in terms of danceable electronica, these songs nevertheless are a more honest representation of U2's music from the 1990s. The samples and big beats twist the band's comfortable sound in new directions. The songs aren't always successful, but hearing them now, warts and all, is a welcome diversion from the frustratingly simplified recasting of the band on the A-sides disc.

The main thing "1990-2000" reveals is that U2 seem trapped by the mythology of their own earnestness. This carefully selected A-side collection feels like the members of the band have resigned themselves to the fact that they are best when writing passionate, uplifting songs. With the exception of bonus disc innovations, even their attempts of rebellion -- "Miss Sarajevo's" arias and the glitzy keyboard explosions on "pop" -- feel sanitized, occurring within the constraints of their larger-than-life, iconic image so that the compilation will flow well.

This is interesting because the oddball deviations and experiments on the bonus disc are more valuable than the limited edition availability. It proves that U2's club kid and jaded hipster phases just led them right back to the end of the 1980s -- right back to the type of music that made them successful and famous in the first place. The problem is that now U2 is trying to rewrite that story. Because "1990-2000" is the band's version of themselves as they want to be remembered. Burn those yearbook photos, ignore the wraparound shades and toss out that giant citrus fruit, because the 1990s were simply a wrong turn down an otherwise straightforward path. No harm done, no integrity damaged, right?

Well, no. Unfortunately, "1990-2000" also shows that the earnest U2 of 2002 isn't the same earnest U2 of 1987. The two new songs on the collection, "Electrical Storm" and "The Hands That Built America" (from the upcoming Leonardo DiCaprio movie "Gangs of New York") buttress the point. Both are gorgeous: The William Orbit mix of "Storm" swells with choruses that climax in a crash of guitar and Bono's yearning falsetto, and "Hands" screams with cinematic schmaltz and sweeping strings. At the same time, the emotional content of both songs is abstract, tugging at the heartstrings with vague declarations like "Storm's" "Let's see colors that have never been/ Let's go to places no one else has seen." These songs are cookie-cutter U2: Start with guitar chime, cue grand choruses, now end with a big crescendo and universal revelation. Despite how moving they sound, they emerge somewhat hollow and empty.

Even more disheartening, they sound contrived and somewhat complacent, which was what U2's changes in the 1990s were supposed to prevent. The band members said they didn't want to become caricatures of themselves, spitting out the same echoey chords and 4/5 songs album after album. Striking those ironic poses had its price -- it stole the innocence and purity that made the earnestness of their early music so magical and true.

The forced solemnity found on "1990-2000" is a sort of conformity that's antithetical to what the band has always stood for, and negates the limitless freedom of sound that made U2 great in the first place. Pass me some Maybelline and crank up that Bauhaus; I feel like a couple of spins of "Pop" are in order.