Pierce Brosnan is relaxed, Halle Berry has a catsuit to die for and the gadgets are awesome. It's flawed, but it's the best 007 flick in 20 years. 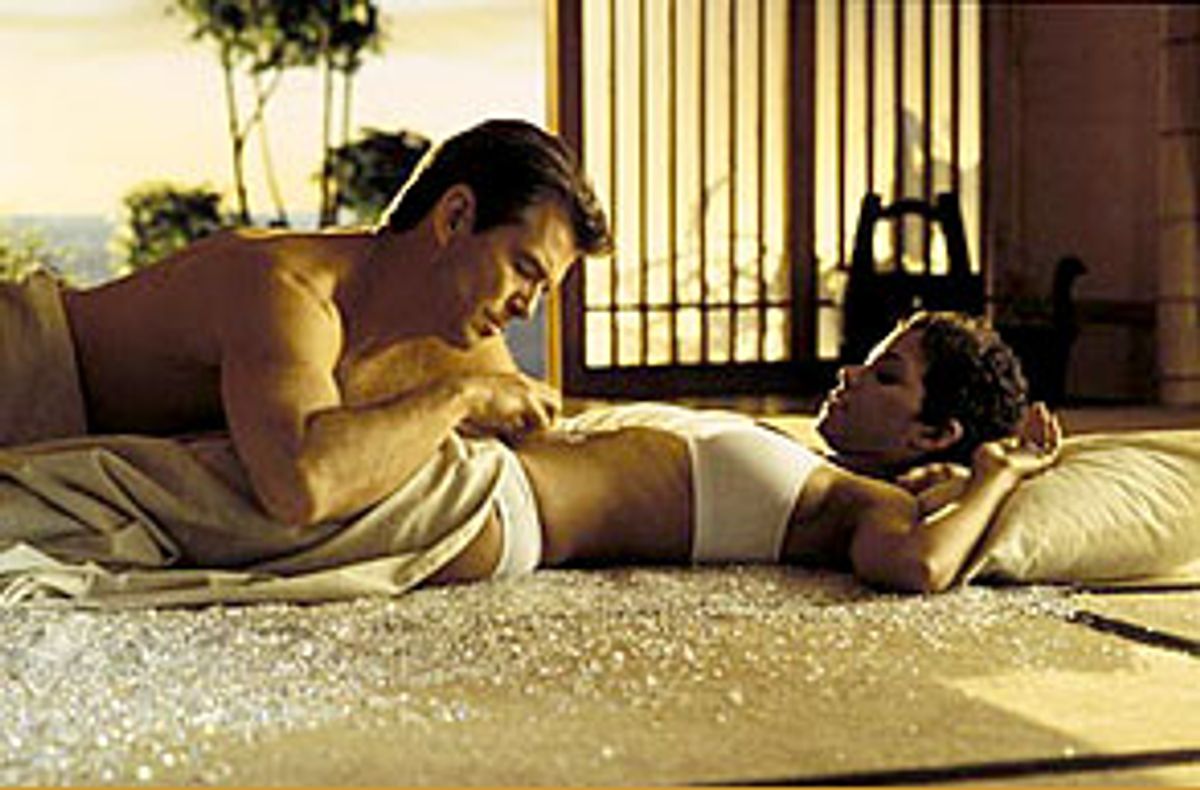 It's a testament to the eternal optimism of moviegoers that nearly everyone looks forward to a new James Bond picture. It never matters how disappointing the last one might have been: The franchise, which is now 40 years old, has come to mean something more than the sum of its highly inconsistent parts. For one thing, the series is safe as milk that's been neither shaken nor stirred -- grannies of many stripes will happily watch the older Bonds (and maybe some of the newer ones) on the telly when they show up.

At the same time, there's still something vaguely disreputable about the Bond movies; it's more an aura than a theorem that can be proved. When they're bad, they leave us feeling disappointingly clean. But when they're good, we walk away feeling just a little dirty -- a bit treacherous and elegant ourselves, if only for an hour or so.

With just a bit of streamlining, "Die Another Day," the 20th Bond picture, might have left us feeling very, very dirty. As it is, the movie is hobbled by an overblown climax that feels tacked on, a trundling, sorry patchwork of needless explosions and weary derring-do that reads like an apology -- a coda thrown in, at great expense (these are big explosions), in case we didn't find the rest of the movie exciting enough.

That's a shame, because right up until that climax -- which mucks up the movie's last half-hour or so -- "Die Another Day" has plenty of the wit and style that the Bond movies have been missing for the past 20 years or so. Pierce Brosnan, who has played Bond in the last four movies, has sometimes been a perfectly adequate 007 and sometimes a disappointing one, depending largely on what's going on around him: He's elegant and often very human, but he's also rather stiff, as if he has sometimes found it hard to compete with so many deafening explosions and can-you-top-this stunts.

Brosnan has been livelier in pictures like "The Thomas Crown Affair" and "The Tailor of Panama" than he has in any of his first three Bond movies; in "Die Another Day," he seems to have finally brought it all together. He's both relaxed and sly, and his lines have a nice ring to them, like the satisfying ping you get when you tap a piece of fine crystal. And in the best Bond tradition, he isn't afraid to play the fool occasionally.

When the terrific "new" Q (not that the late, great Desmond Llewellyn can ever quite be replaced), John Cleese, shows 007 some of the new gadgets, Bond looks him over and takes a good-natured jab at him: "You're cleverer than you look." Cleese's Q coolly sends it right back at him: "And you're looking cleverer than you are." Brosnan's Bond takes it like a gent, with an unabashed little laugh that shows he knows he's been topped.

Perhaps Brosnan is particularly good here because for once he's actually been given something to do. At least until that ill-advised climax, director Lee Tamahori, whose credits include "Once Were Warriors" and "Along Came a Spider," and writers Neal Purvis and Robert Wade seem to have taken care to give us something different from the same old Bond. Tamahori seems out to entertain us rather than just impress us, and that distinction makes all the difference.

For the 2.9 percent of the population who expect a contemporary Bond movie to be a model of coherence, it's crucial to note that the plot of "Die Another Day" doesn't make a whole lot of sense, although there are moments when Tamahori fools us into thinking that maybe it will. In the opening sequence, Bond is captured in a demilitarized zone between North and South Korea, after botching an assignment to kill a power-crazed baddie.

When 007 is finally released, he zigzags across the globe, from Hong Kong to Cuba to London to Iceland, to track down that villain's right-hand man, the steely Zao (Rick Yune), who's pretty easy to spot, thanks to the glittering diamonds that have been embedded into his cheek after an unfortunate accident with an exploding briefcase.

While he's looking for Zao, Bond bumps into yet another villain, the icy gazillionaire Gustav Graves (Toby Stephens), who, it just so happens, is about to unveil a giant weapon that will bring the world to its knees. (Remember, the world always has knees in a Bond film.)

Stephens (who's the son of actors Maggie Smith and Robert Stephens) makes a lovely villain -- he's like a sneering schoolboy you'd really like to punch out -- and he balances Brosnan's warmer brand of classiness well. The two also share one of the finest action sequences in any Bond movie, a sword fight that takes place in a tony fencing club. (Madonna makes a brief, amusing cameo as a fencing instructor; she's wonderful when she's simply allowed to be a presence in a movie, instead of attempting to impersonate an actress.)

Tamahori and cinematographer David Tattersall keep the action clean, clear and blissfully old-fashioned. Bond and Graves, stripped down to their trousers and expensive white T-shirts, go at each other with a murderousness that's both refined and feral. The scene is a gorgeous example of modern-day swashbuckling, and a nod to the fine tradition of stage combat -- the sort of thing we used to get in the movies when fighting meant more than just fancy cutting in the editing room.

But that sword fight also creates its own set of problems: The next leg of Bond's adventure takes him to a magnificent ice palace in -- where else? -- Iceland. But even all that glamorous icy whiteness feels underwhelming after the exhilarating simplicity of that good old-fashioned English swordplay. The action becomes noisier and murkier; and while the movie opens with a nicely executed surfing scene, the Iceland segment features Bond riding some very cheesy-looking computer-generated waves.

That's just one example of the puzzling inconsistencies that litter "Die Another Day." Tamahori gives us some marvelous details: Gadgets have taken a back seat in recent Bond movies, but care has been taken here to give us some good ones. And there's the brilliant touch of a spy headquarters located in an abandoned London Underground station. How can Tamahori get so many of the smaller, tougher things right, only to turn around and get most of the easier things wrong?

But you can say this much about him: He seems to have brought out a sense of lightness and fun in his actors. Halle Berry as Jinx -- a vixen who may or may not be fighting on the "right" side -- simply looks as if she's having a wonderful time, whether she's emerging from a dip in the ocean in an orange bikini, a white knife holster dangling from her hip, Ursula Andress-style, or interrupting her lovemaking with Bond to flip out a penknife so she can cut into a juicy piece of fruit. She also gets one of the best Bond-girl costumes since the days of Honor Blackman: A leather catsuit rendered in magnificent aubergine instead of black.

Tamahori's "Die Another Day" is an imperfect Bond movie. But for every patch where it's dull and lifeless or just plain stupid, there are also sections that are significantly different from anything we've seen before in a Bond movie. For one thing, "Die Another Day" opens with Bond in disgrace. He's been held captive (and tortured) in a Korean prison camp for 14 months; when British intelligence finally, reluctantly rescues him, it's made clear that his glory days are over. As M, once again played by the magnificent Judi Dench, tells him with almost unbearable coldness, "You're no use to anyone now."

In "Die Another Day," it's failure that galvanizes Bond and forces him into action. We're not used to seeing a demoralized Bond. And yet Brosnan plays that Bond beautifully, giving us a glimpse of what can happen to a supremely confident and successful man when everything and everyone turns against him. This is a more vulnerable Bond than we've ever seen, but also, perhaps not paradoxically, a more masculine one. By the end of "Die Another Day," Bond is surer of himself, precisely because he's been forced to reckon with his limitations. Every James Bond, from Sean Connery to Roger Moore to Timothy Dalton to Brosnan, has looked great in a tuxedo. Here, he looks at home in his own skin as well.