There's no doubt that Pedro Almod 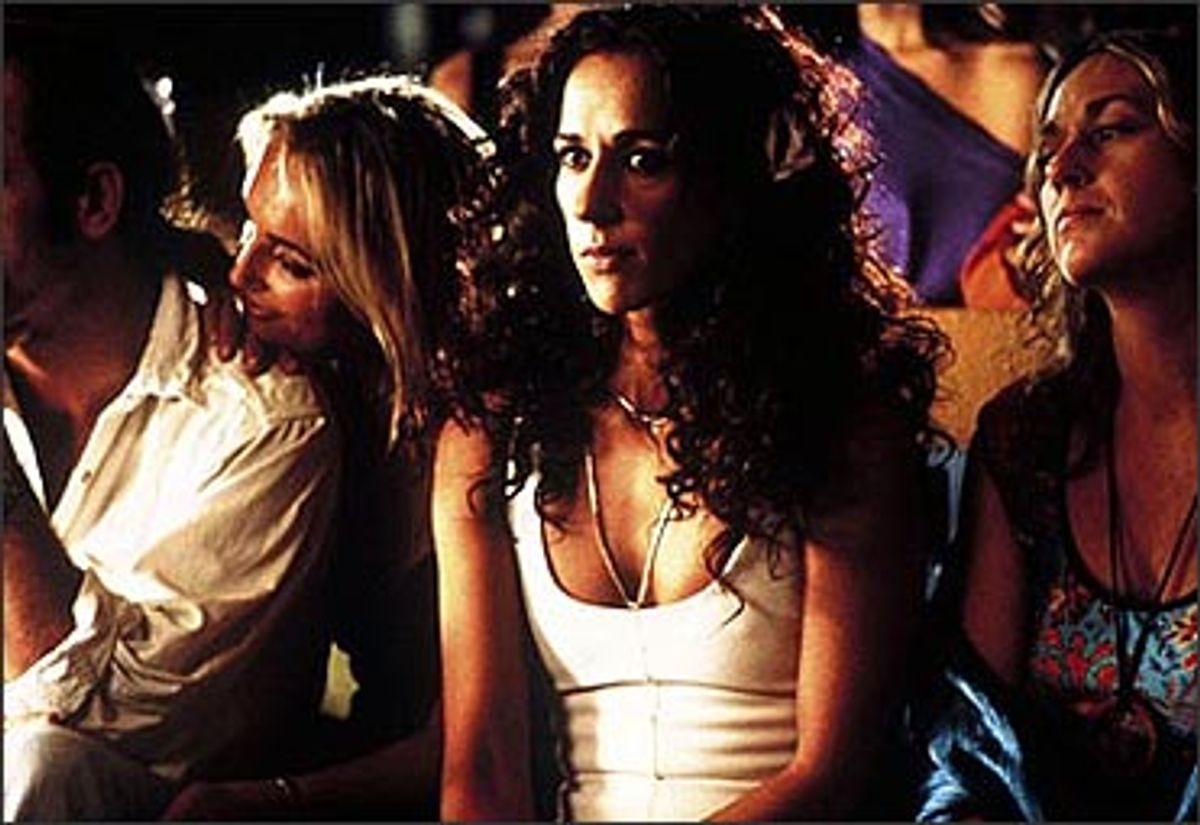 There are some wonderful things in Spanish director Pedro Almodóvar's new picture, "Talk to Her." First off, a gorgeous, wordless sequence in which a lean, muscular bullfighter dons the garments she wears to do her job, from rose-colored hose to a bolero jacket heavy with golden threads. Then there's the movie-within-a-movie, styled like an old surrealist silent, in which a man takes a potion that shrinks him to miniature size -- there's no antidote, but he finds his truest happiness by climbing into his lover's vagina, where he remains forever.

"Talk to Her" seems to have plenty going for it: It's neatly constructed, it features characters who are not like you and me and who get themselves into a variety of sorrowful but interesting predicaments, and it looks beautiful. (Cinematographer Javier Aguirresarobe gives us something to look at every moment, whether it's the dark, almost mournful glitter of that bullfighter's costume or a countryside transformed by sunlight into an almost shocking shade of green.)

Yet somehow "Talk to Her" feels flat and overworked; it's a finely crafted movie that just feels too fussed over -- a mechanical flower instead of a supple, living one. Almodóvar has made some of the most passionate (and strangest) movies of the past 20 years, from the blissfully florid melodrama "All About My Mother" to the delectably disreputable "Matador." He has always loved to drop shockers like water balloons from a terrace -- his characters, more often ruled by their hearts than their heads, often behave in ways that we can't wholly approve of.

But then, Almodóvar's movies, at their best, are all about the uselessness of either approval or disapproval as tools to help us get through life. Almodóvar loves beauty and drama and all kinds of romance; when he's working at the height of his powers, those qualities blend into a potent tincture that seeps deep beneath the surface of his images. Almodóvar's great movies -- and to the two mentioned above I'd add "Law of Desire" and "Women on the Verge of a Nervous Breakdown" -- always seem colored from the inside out.

But he's also made his share of clunkers, movies like "Tie Me Up, Tie Me Down" that court perversity for its own sake. And Almodóvar has often been guilty of cranking the emotion-o-meter up high just for effect. "Talk to Her" is much better than Almodóvar's "bad" movies. But it never soars as freely as his best ones do -- it has a very trim, manicured wingspan.

Benigno (Javier Cámara) is a shy, well-mannered but not-quite-right nurse who has been assigned to care for a beautiful young dancer named Alicia (Leonor Watling), who has been lying in a coma for several years. We learn that Benigno, who tends her with the meticulousness of a lady-in-waiting, manicuring her nails and tenderly rubbing lotion into her skin, has developed feelings for her that aren't completely appropriate (there's that word again -- although this time, it really is meant as a challenge).

Benigno's story dovetails with that of Marco (Darío Grandinetti), a journalist who has fallen deeply in love with the bullfighter Lydia (Rosario Flores). Marco has his own challenges in his relationship with Lydia, and he and Benigno forge an unlikely friendship, reaching out to each other across the chasm of loneliness and isolation that separates each from the woman he loves.

As in most Almodóvar movies, the homoerotic subtext isn't a subtext at all -- it's a mysterious, shifting glimmer of light that floats on the surface of the story. That's one of the things that make Almodóvar's movies so freeing; he has no interest in hanging helpful identification labels on the nebulous (or not so nebulous) attraction between unlikely people.

Marco and Benigno do love each other, in a manner of speaking, but not necessarily more than they love their women. And it's their love for those women that causes them the most pain. Both are involved with women whose physicality is so much a part of who they are, and both have to stand by and watch as the women's ability to move -- to express themselves in the best way they know how, in the ways they have been trained to do -- is compromised.

Almodóvar clearly has deep feelings for his characters. So why doesn't it translate onto the screen in "Talk to Her"? Almodóvar has been moving toward a more naturalistic style in recent years, a style that's perhaps more accessible than the campy outer-space quality of his older movies. But those older movies, and even something as recent as "All About My Mother," had the feel of a heartfelt signal beamed from a planet far away, a place where freak flags are always flown high because -- well, why fly them low? Even in his unsuccessful movies, Almodóvar has always gone all out for operatic intensity that sometimes bordered on lunacy: His great pictures are like arias played on a Theremin, possessed of a special kind of nervous-making beauty.

"Talk to Her" takes place firmly on our own planet, but Almodóvar is still throwing in his trademark kinky twists: a male nurse sexually obsessed with a comatose woman? By now, if we know anything about Almodóvar, we know that we're supposed to take the conceit and run with it, without stopping to notice that it's a conceit at all.

And maybe that's precisely the problem: "Talk to Her" knows it's an Almodóvar movie, and reminds us frequently. It doesn't matter how many hot tears are shed by the characters -- the movie still has a sheen of cool self-awareness. Benigno is supposed to be something of a charming lost soul, a person who has been so starved of love that he doesn't quite realize it's not a good idea to fall for someone in a coma.

But as Cámara plays him there's something more than vaguely creepy about Benigno; when he chatters cheerfully at the nearly lifeless Alicia, telling her how he's going to redecorate his apartment for the two of them, we're supposed to see it as the most desperate kind of communication, but a form of communication nonetheless. The concept, I suppose, is that we're supposed to feel sympathy for Benigno even though we're a bit repulsed by him. But then, our response to the best Almodóvar movies hinges on emotion, not concept.

The love story between Marco and Lydia is much more affecting, partly because Grandinetti and Flores are such appealing actors (and maybe because Flores is awake through at least part of the movie). Grandinetti is one of those stately, elegant actors whose carriage makes him seem aloof, yet his eyes draw you into an almost conspiratorial intimacy. And Flores is simply fabulous-looking: With her elongated features and her straightback-chair posture, she's a Modigliani come to life. For her, intimacy isn't conveyed in a look, but in a way of moving. She's long and narrow, an insect with impossible limbs, and her walk is spindly, graceful and sure -- her very musculature speaks a message of love.

I confess to wanting much more of Lydia in "Talk to Her," and much less of Benigno. But Benigno is the movie's pudgy, immovable center, and we're stuck with him. His love for Alicia is ill-advised at the least, and sick at the worst, and yet Almodóvar wrests the movie into place around him so we've no choice but to embrace him -- our only other choice is to reject the logic of the movie, which is that love is strange, and how can we possibly do that?

But Lydia, a figure we can never quite get ahold of, striding around the edges of the movie with her toreador's cape, doesn't need to ask for our pity or our love. She is the spirit of Almodóvar -- she's the man who lives inside every woman, and the woman who lives inside every man. "Talk to Her" is at least partly about the misfiring of communication between the sexes, but Lydia's bearing alone renders the notion meaningless. When she speaks, there's no way to misunderstand her: It's something in the way she moves.