A wayward black American princess sees an unnerving reflection of herself in Condi Rice's efficient soldiering for the Bush administration. 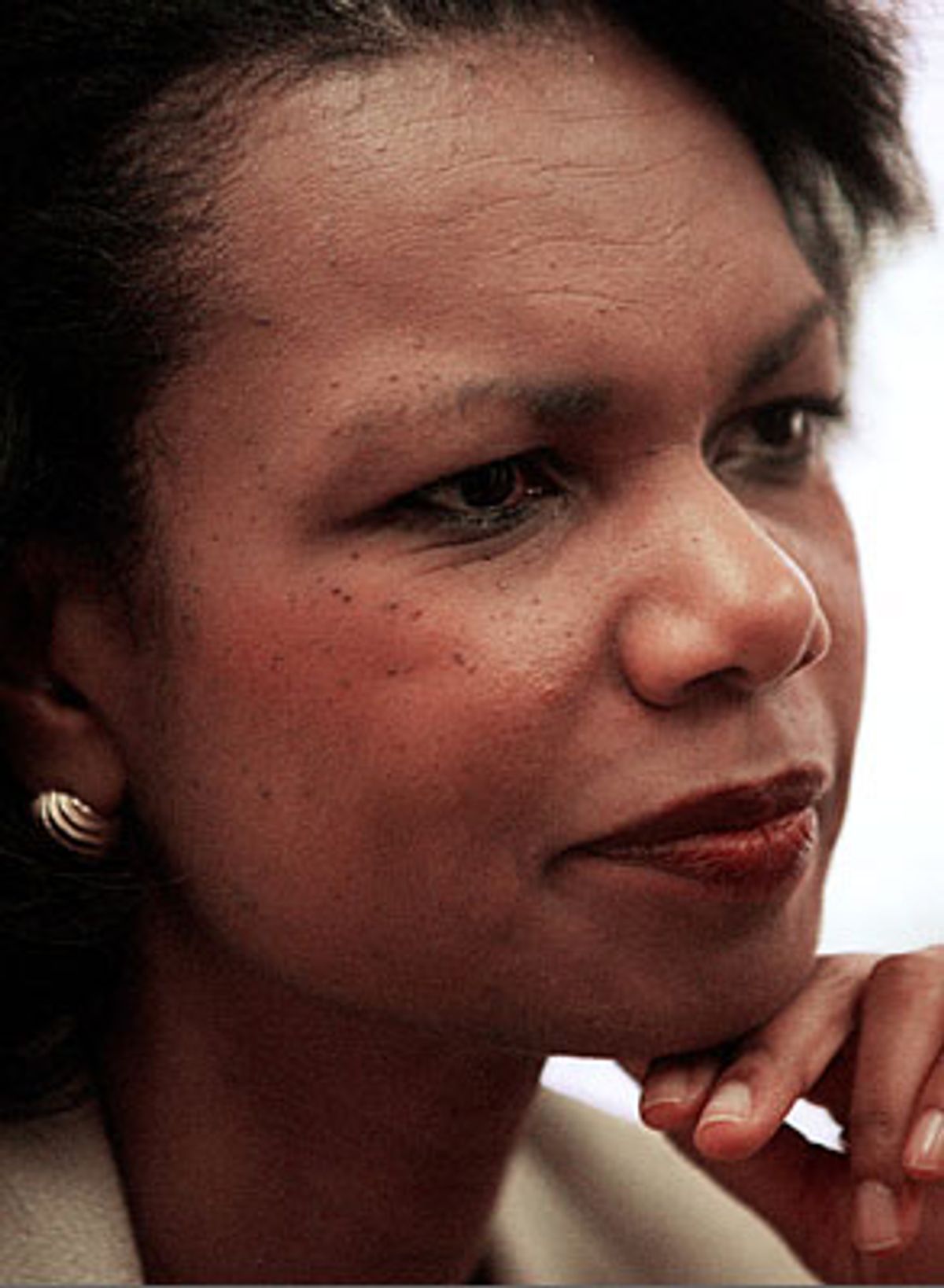 Condoleezza Rice is a cypher -- for most people. Press profiles portray the tough-minded national security advisor as some sort of preternatural mystery. Writers consistently marvel at her articulateness and speculate about her unflappable demeanor. In a review of "The Lives of the Muses: Nine Women & the Artists They Inspired" in the New York Observer, Benjamin Anastas wrote:

"First, a confession: Sometimes I think that Clio, the muse of history, has come to earth in the human form of Condoleezza Rice. Consider her utter certainty, the eerie, distant quality of her voice, and the strange calm she projects at the margins of White House photographs. And I can think of no other explanation -- save, perhaps, the puppy's eagerness to chew on rawhide -- for the exuberance she inspires in President Bush the Younger, her artist ... Just what exactly did happen behind closed doors during the famous 'education process' that resulted in our nation's foreign policy?"

Overlooking, for now, the racist and sexist undertones in this wide-eyed gushing, I have to say that Rice is no mystery to me. She's a BAP -- a bona fide Black American Princess -- who exhibits all the telltale qualities of the category: a razor-sharp proficiency, cool manner and a good daughter's devotion to carrying out orders. Believe me, I ought to know.

I count myself a wayward black American princess. As the editors of last year's "The BAP Handbook: The Official Guide to the Black American Princess" put it, I have been programmed since birth to "strive for perfection" in everything I do, as well as possess a keen sense of entitlement.

The black American princess is a prim, well-groomed, accomplished and articulate woman. In mainstream business culture, she rarely draws any attention to her ethnic heritage. She's often the sole black woman sitting in workplace meetings, or the hard-working, dedicated accomplisher of miracles for her church or community organization. (Not all black educated professional women are BAPs. Oprah Winfrey? Not a BAP, no matter how hard she may try; she's too spontaneous and relaxed -- and she grew up poor.)

The BAP baffles most people by confounding their expectations. Unless prodded, she exhibits no clear racial consciousness and staunchly defends her individualism. She speaks standard American English, rarely switching to the black English vernacular unless forced to by an overly familiar white colleague trying to establish intimacy. She may speak several languages, has likely traveled extensively, and may excel at antiquated avocations and elitist pursuits, like opera singing, violin or lacrosse.

BAPs are the feminine avatars of the black bourgeoisie, the fairer (if not in skin tone) half of a subculture larger and more complex than that limned by the Eastern Seaboard's patrician black Brahmins portrayed in Stephen L. Carter's bestseller "The Emperor of Ocean Park."

This tribe of upper-middle-class African-Americans prides itself on its heirs' ability to assimilate and integrate. Growing up in white suburbs and attending elite schools and institutions of higher learning, black American prince and princesses are immersed in Anglo (often WASP) culture and emerge with modes of speech, behavior and grooming that brand them as "Oreos," black on the outside and white in the middle.

From an early age, BAP matriarchs teach offspring their duty to present a flawless front in public, affirming the superiority of our forebears in defiance of Jim Crow and other racist institutions. BAP mothers also pass on negro noblesse oblige to their children, especially their daughters, who often lead fundraising efforts to support African-American causes. But they're more likely to raise money via debutant cotillions and other social events than car washes and bake sales.

BAP encoding presumes that internalizing white Western culture is a way to combat the historical stigma associated with being African-American. Since Rice is exactly 10 years older than I am, I believe that our parents shared the same belief in this pre-civil rights era acculturation process. Often fiercely proud of their African-American heritage, our parents were either blind to the fact that BAP conditioning is based on the wholesale acceptance of racist and sexist stereotypes about African-Americans generally, or knowingly encouraged us to internalize these painful stereotypes as a form of inoculation against racist perceptions faced in the larger world. So BAP mothers pinched and prodded us, reminding us to stand up straight, clearly enunciate each letter when speaking and never display public emotion (unlike other, poorer African-Americans).

Observers may categorize BAPs in subsets. Like Rice, I'm the bookish black-girl brainiac type. Many of us attended all-girls schools (Rice and myself included), which only intensified our obsession with propriety. I've dubbed this variety the "black bluestocking." Members of this group are easy to spot. Most of us offset intelligence with an earnestly girlish demeanor that's not threatening. I secretly covet April Cornell clothing and own more than five pairs of Mary Janes.

Older men seem to respond most positively to black bluestockings. So I'm not surprised that a series of avuncular mentors -- including academic Josef Korbel and former National Security Advisor Brent Scowcroft -- assisted in Rice's ascent into the foreign-policy power elite. I've experienced this odd connection with older white men myself. When I became the first and only black female associate at a San Francisco white-shoe law firm in the '90s, I established the strongest rapport with the senior partners.

As I prepared to leave the firm after realizing that I detested practicing corporate law, I had one last tjte-à-tjte with my mentor, who was 30 years my senior. He urged me to hang in there and try to turn things around at the firm. "I feel like I'm talking to one of my kids," he sighed. His words brought tears to my eyes because I shared that familial bond. Black bluestockings have huge dutiful-daughter complexes. We have been programmed to obey and never challenge the expectations of authority.

Rice repeatedly manifests her own dutiful-daughter training. Friends tell me that the former Stanford provost, literally acting in loco parentis, had no problem implementing the campus administration's most painful orders -- cutting budgets, laying off people of color or disavowing solidarity with female professors. Like me, she had been taught to be a good soldier, carrying out orders with efficiency and without regard to social consequences.

Rice's dutiful-daughter role flourishes in the Bush family hierarchy. It began when Rice was a loyal advisor to Papa George during his administration. It continues with Dubya in this administration, though they have more of a cozy sibling dynamic. Isn't it curious that the press never comments on any sexual tension between Rice and President Bush, despite the fact that she's his closest aide? If President Clinton had had a similar relationship with a female aide, the press would have had a field day trying to discover a sexual component to the attachment.

The fact that Rice is attractive without being sexual confirms her (pardon the pun) BAPtist upbringing. As black women, we have been taught not to flaunt our sexuality, thus subverting and preempting the stereotype of the oversexualized black woman.

Condoleezza Rice is the first bona fide black American princess to step into the public limelight since Lena Horne. She's a particularly exotic BAP because she's the first geeky BAP to be in the spotlight. Black male nerds' cultural profile has increased since the 1980s, with the appearance of cartoon characters like Oliver Wendell Jones in "Bloom County" and television characters Steve Urkel of "Family Matters" and Dwayne Wayne of "A Different World." These media images helped us to identify black-geek characteristics in real people like Supreme Court Justice Clarence Thomas, Thomas Sowell and Walter Williams. But we've never seen a female version -- until now. Rice's stiff, processed helmet of a pageboy hairstyle is the black-girl geek equivalent of pundit George Will's bow tie.

And it is Rice's very BAPtitude that led to her success. Her ascension to power shows how the establishment will reward an individual who completely appropriates white behavior and privilege, regardless of race or ethnic background. But it's also her BAPtitude -- and its embodiment of an outmoded "white makes right" philosophy -- that's responsible for whatever African-American animus exists toward Rice.

Make no mistake, BAPdom has its perks. It helped get Rice to the White House. Visibility and privilege grant access to people, places and experiences most people only read about in Dominick Dunne's tales about polite society. Looking back on all the sleepovers, parties and wedding receptions that I've attended, only now do I realize that I was often the only person of color in the room at all, or the only one who was not a servant.

It hurt to disappoint my mentor when I left my high-flying law firm. I knew that ditching the firm was not the action of a dutiful daughter. But I had begun to reexamine my BAPtitude, realizing that the price of maintaining it was too high. BAPtitude can become an insidious mask -- not unlike the one in poet Paul Laurence Dunbar's "We Wear the Mask" -- that conceals the wearer from herself as well as from others. Like some twisted take on a Hans Christian Andersen fairy tale (say, "The Red Shoes"), that mask of perfection and poise wears you, instead of you wearing it.

I now struggle to balance my assertion of individuality with expressions of solidarity and concern with African-Americans, most of whom do not share my background and values. Like Rice, I've often refused to succumb to a race-based consciousness -- what economist Glenn Loury called the "figment of the pigment" in his review of "America in Black and White" by social scientists Stephen and Abigail Thernstrom. Yet I can't pretend I don't feel anger and humiliation when I'm confronted with racism. My BAPtitude isn't enough to shut out the racism around me.

I've learned something else, too: A cheerful BAP mask of perfection stifles spontaneous emotional display, often preventing personal connection, which only serves to heighten the wearer's sense of alienation. It's lonely when one's poise ossifies into impenetrability.

I wonder if this is one of the reasons why Rice, like so many other tough-minded BAPs I know, has such a strong religious faith. The Lord is an excellent confidant when someone feels misunderstood. I pray that her Christian compunction overcomes any conservative impulse toward moralism and helps to keep the United States out of war.

Unlike Condi, I've decided to loosen the bindings of my mask and display my imperfections. I've been gratified and occasionally surprised by others' compassion when I dare to display my frustrations and even lose my temper in public. Fewer folks than I feared appear to think less of me for doing so. No one gasps or points fingers. And even if one of them were to do so, I feel as if I can now look back at them with pride and say: "This is me, all of me."