A top Canadian official calls Bush a "moron" -- and her countrymen cheer. Why do our northern neighbors think the president is a chimp? 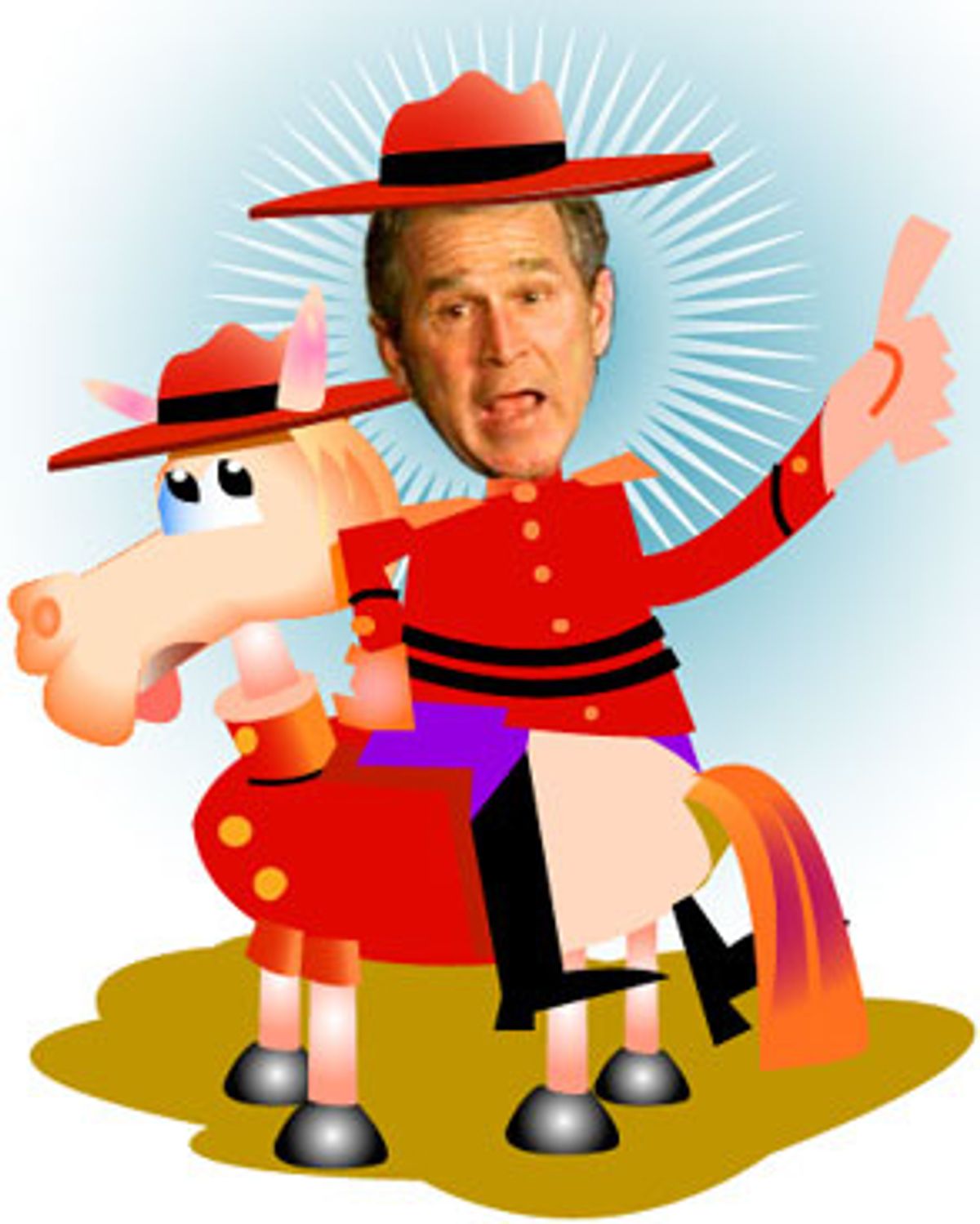 It takes a lot for Canada to make the papers, but this was a good one. Last week at a NATO conference Francoise Ducros, a top aide to Canadian Prime Minister Jean Chretien, was overheard calling President George W. Bush "a moron." Out loud.

It was, to say the least, a bit of a diplomatic faux pas. In the Canadian Parliament, opposition politicians screamed for the head of Ducros, Chretien's director of communications. Ducros paid the price for her indiscreet comment Tuesday when Chretien accepted her resignation. (She had offered to resign last week, but the prime minister initially refused to accept her resignation.) Before Ducros departed, a Canadian news organization ran a poll, asking the public what Ducros' fate should be.

The winning suggestion: Give the woman a promotion.

No, these are not good days for the president's international image. Bush may bask in warm approval ratings back home, but Canadians seem to view him with a mixture of fear and contempt, a German government official compared his foreign policy to Hitler's, while European political cartoonists almost uniformly portray him as various species of monkey. And those are his allies.

Prime Minister Chretien, a man who often seems to speak both English and French as second languages, promptly offered a helpful clarification. "He's not a moron at all," Chretien said of Bush. "He's my friend."

That ought to show up in future Bush campaign literature. Pretty much lays the issue to rest (although Chretien left open the question of whether the president might be a chucklehead or possibly a putz).

Canadian antipathy to the States is neither new nor secret. A recent cover story in the National Review pilloried Canadians as "Wimps!" decrying our mewling, hypocritical complaints about U.S. behavior and facetiously suggesting that a good, sound bombing would do wonders for our attitude.

The Review story had a point. There is indeed a facile strain of Yankee-hating on the Canadian left, a relentless demonizing of the American ogre combined with an utter lack of gratitude for the military and economic benefits of having such a kick-ass next door neighbor. While 9/11 prompted an overwhelming grass-roots outpouring of Canadian solidarity with America, it also gradually uncovered an appallingly deep and intellectually lazy anti-Americanism among many educated Canadians. There was a widespread tendency to seek justifications for the terrorist attacks; a sort of "Yes, it was awful, but so is U.S. foreign policy" approach. The long habit of criticizing America proved so durable that many Canadians began to cast Osama bin Laden as a legitimate grievant.

That's inexcusable. But in many other ways, northern anti-Americanism is not only understandable but inevitable. And for that, President George W. Bush must carry the can.

Try to walk a mile in fur-lined Canadian galoshes while you consider the following.

As the U.S. prepared to attack the Taliban, Bush called for allied support. Canada responded by sending troops to Afghanistan.

And how did the president say thank you? By imposing a massive tariff on Canadian softwood lumber, a tariff that threatened doom for the West Coast lumber industry and made a mockery of our vaunted North American Free Trade Agreement (not to mention the supposedly fundamental Republican commitment to free trade). The World Trade Organization criticized the U.S. tariff as pure politics. The Canadian government howled. No matter.

Meanwhile, four Canadian troops were killed in Afghanistan when an overzealous American pilot bombed them during a training exercise. The military investigation was secretive and grudging, while Michigan politicians began raising money to protect the U.S. pilots from a "witch hunt."

And Canadians asked: Is this how America rewards its friends?

More irritants have been piling up of late. Recently Canada's Foreign Affairs Office took the previously unthinkable step of issuing a travel advisory after the Americans threatened to single out Canadian citizens of Middle Eastern descent.

Lately, Canadian newspapers have been full of the tale of Michel Jalbert, a Quebec duck hunter who recently spent a month in a Maine jail. His crime: filling up at an American gas station in his hometown of Pohenegamook, which sits on the Canada/U.S. border. It's a daily routine the villagers have engaged in for years (the gas station's driveway is in Canada, but its pumps are in the United States). American authorities imprisoned him for crossing the border with a gun, not allowing him to contact his family for over a week.

The Jalbert story has been huge in Canada, ignored in the States. Which only adds to Canadian irritation -- such affronts sting all the more since the Americans are no more aware of our outrage than a baboon who walks through a spider web. (Pat Buchanan recently caused a top-of-the-newscast Canadian furor when he referred to us as "Soviet Canuckistan." Buchanan really ought to consider moving to Canada -- up here, people pay attention to him.)

Recently, PBS ran a two-part biography of the great Benjamin Franklin. It detailed his subtle and brilliant diplomatic work in Paris during the American Revolutionary War, tirelessly ingratiating himself with the French to gain their support against Britain.

Not many Ben Franklins around these days. Then again, there is virtually no one in the Bush administration who feels the lack. Apparently, the new America does not need friends.

This American attitude was detailed with sobering clarity last September when the administration released its "National Security Strategy." In it, the U.S. frankly proclaimed its intention to dominate the globe and, as the world's only superpower, to play by its own rules. All justifiable, the manifesto claimed, because unlike the imperialist titans of the past, America always acts for the common good.

The honesty was almost refreshing. And the reality of the global situation is undeniable. What's annoying is that America is not content to be the world's über-bully. It also wants to be loved. It's like Bogart and Peter Lorre in The Maltese Falcon. "When you're slapped," the U.S. sneers, "you'll take it and like it."

Few outside the U.S. accept the country's automatic claim to the high moral ground. On the contrary, postwar history suggests that the U.S. tearily celebrates its own democracy while coldbloodedly subverting any other governments -- including democratic governments -- deemed to be hostile. Bush's "You're either with us or against us" rhetoric might have been all right when the villain was bin Laden. But now that this noble battle has been replaced by what is widely considered an irrelevant vendetta against Iraq, the attitude doesn't wash internationally.

President Bush appears to have the instincts of a congressman. Congressional representatives do not generally care about foreign policy (unless it leads to local defense contracts). If some trade issue gives a congressman the opportunity to bash foreigners while championing local voters, he'll snap it up like a whorehouse gift certificate. Likewise, the Bush administration often seems unconcerned with how American actions are perceived abroad.

Most of the media attention accorded Bush's National Strategy focused on military matters. But grass-roots anti-Americanism often centers on an issue that American commentators rarely deign to notice -- trade. The National Strategy revealed an interesting attitude toward free trade, a policy usually considered intrinsically American. Free trade, it announced, would be pursued as a sacred good. With one caveat: American workers must never suffer.

Hello? America will sign free trade agreements with you but if they ever start working in your favor, it's tariff time? What sane nation would sign a deal like that?

A nation with no other choice. A nation like Canada.

The favorite Canadian quote on cross-border relations came from the late Pierre Trudeau. Living next door to the U.S., the former prime minister said, is like sleeping with an elephant; you feel every twitch and grunt.

He was perhaps too diplomatic to point out that Canada is actually more like a flea on an elephant's ass -- invisible unless we prove too annoying, and then easily crushed. That's a fact Canadians are forced to accept. But it doesn't lead to fond feelings.

Recently I was talking to some friends about that Ben Franklin documentary and happened to mention the inspiration French revolutionaries took from the Americans. My friends were skeptical -- surely, they insisted, the American Revolution must have followed the French. The idea that those heroic peasants from "Les Misérables" lit their torches from an American flame seemed impossible to my Canadian peers. Today's America is viewed as Republican -- not bravely-manning-the-barricades republican, not teaching-the-world-the-ways-of-liberty republican. George W. Bush Republican.

And we know what Canadians call him.