With industry henchmen in complete control of Washington, the Clean Air Act, wilderness preserves and environmental enforcement are all endangered species. 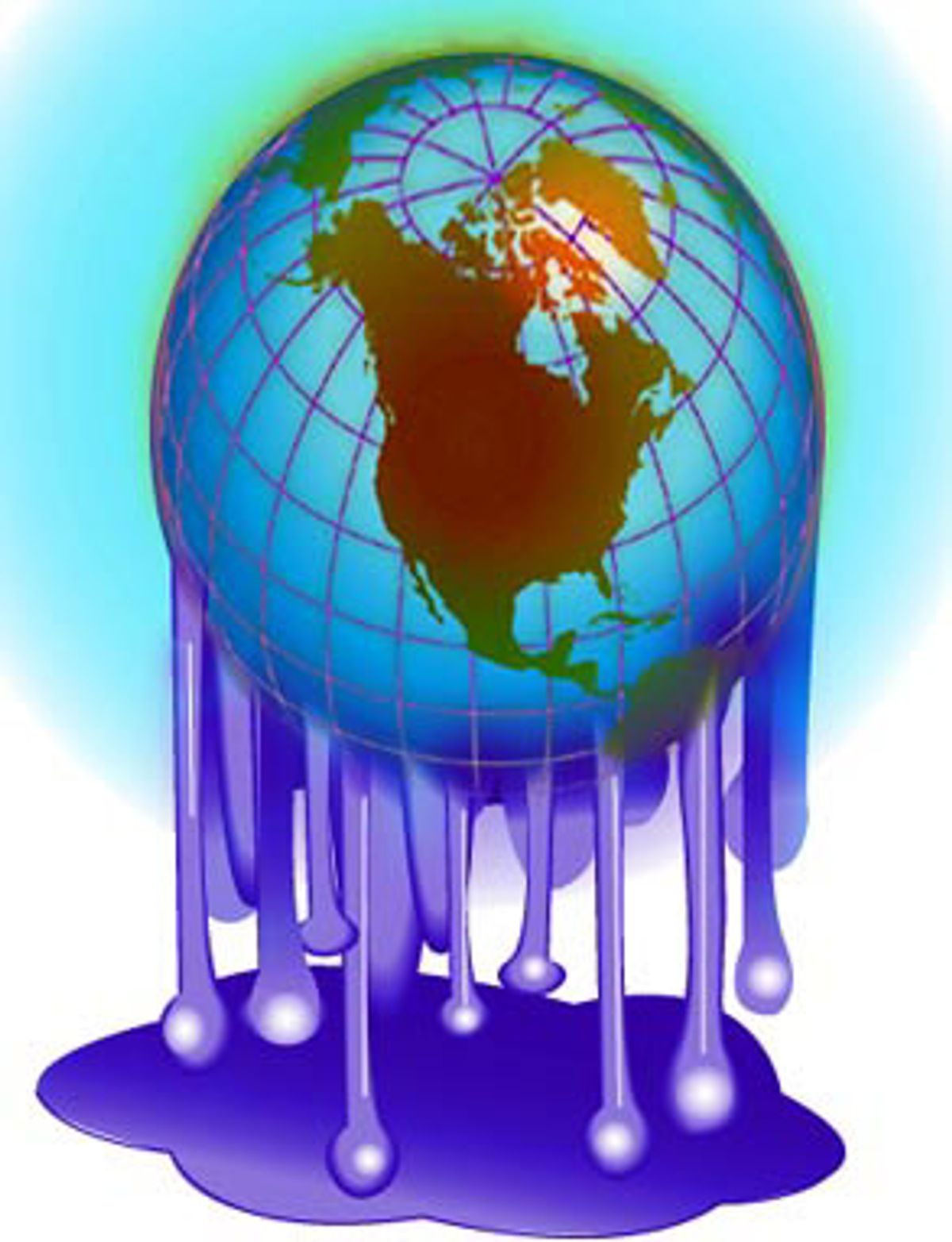 When Environmental Protection Agency administrator Christie Whitman loosened clean-air rules for power plants and factories last week, it seemed like the first bold move of a White House newly empowered by its midterm election victory to reward its industry friends. In fact, Whitman had the power to make the change unilaterally, and she'd been moving to do so before the GOP took back the Senate -- and there was little the Democrat-controlled Senate could have done to stop her.

But the GOP takeover means there will be no Senate hearings to review the new policy, and Democrats who had planned to subpoena EPA documents related to Whitman's decision -- documents they believe would reveal the shoddy science as well as the influence of industry folks lobbying for the move -- are now powerless to do so. Thus Whitman's move is the symbolic opening of a new phase in the battle over the environment: Between an administration that no longer has to worry about Senate oversight when making the regulatory changes its business constituency demands, and an advocacy community that will now have only lawsuits as weapons to battle such changes.

And now, not only is the White House in the symbolic hands of the oil and gas industries, thanks to President Bush and Vice President Cheney's corporate ties, but so is the Senate. With the GOP takeover, the chairs of key environmental oversight committees went to senators from Western states who owe their political fortunes to those same constituencies.

With Republicans controlling both houses of Congress, expect a new push for drilling in the Arctic National Wildlife Refuge, new cuts to the EPA enforcement budget and a major move to weaken the Clean Air Act when it comes up for reauthorization next year. But the real battle over the environment probably won't come through legislation. Senate rules mean that 60 votes are needed to pass most controversial legislation out of the chamber (should opponents attempt a filibuster), so the administration will still have trouble passing extreme anti-environment bills given the slim GOP margin in the Senate and the power of some pro-environment Republican senators. ANWR, for instance, clearly does not have a filibuster-proof majority. Advocates on both sides of the issue say the chances are about 50-50 whether it would even be able to garner the 50 votes needed for passage. (In the event of a tie, Cheney, who supports drilling in ANWR, would cast the tie-breaking vote.)

Advocates say the Democrats' loss of the Senate will be felt most keenly when it comes to oversight over the regulatory and administrative changes the administration can make on its own. The White House now has carte blanche to make huge regulatory changes -- which almost always means relaxing regulation -- without a skeptical Senate to try to keep it in check.

"Our concern is that [Whitman's] clean-air rule rollbacks have been cooked up without any real data," says Eric Schaeffer, former head of the EPA's Office of Regulatory Enforcement who resigned last spring to protest Bush administration cuts in the agency's enforcement budget. "The decision was made off an industry wish list as opposed to trying to understand what the impact on the environment is. Where's your analysis? Where's the data? You say you're the sound science administration, where's your science?"

The regulations Whitman relaxed were Clinton-era modifications to the Clean Air Act. The act had required that new factories and power plants use the best pollution-fighting technologies available, but exempted existing facilities. Industries got around the rules by simply expanding old plants rather than building new ones, and so the regulations were strengthened to require anti-pollution upgrades along with any significant renovation of existing facilities. Whitman's decision returned to the old standard.

Before the midterm elections, Schaeffer notes, Sens. Jim Jeffords, I-Vt., and Joe Lieberman, D-Conn., outgoing chairmen of the Environment and Governmental Affairs committees respectively, were moving to hold hearings on the impending Whitman rule changes, and to subpoena documents relating to the agency's move. Incoming Environment Committee Chairman Sen. James Inhofe, R-Okla., has already said he will do neither.

"Today's announcement on New Source Review culminates a lot of work and analysis by both the Clinton and Bush administrations," Inhofe said Friday. He added he had "long been concerned about the impacts that layers of regulations have had on energy producers and refiners," not exactly a strong vote for environmental protection.

Inhofe's rise may be the most dramatic single change in the new GOP Senate. A self-described "extreme radical right-wing conservative," Inhofe is widely considered a conservative extremist especially on environmental issues, even within the Republican caucus. Inhofe will take the chairman's gavel from Jeffords, who was seen as a champion of environmental causes. The Oklahoma senator has called for an overhaul of the Clean Air Act, when it comes up for reauthorization next year, saying it puts unnecessary regulations on energy producers who are required to abide by emissions limits in the law. While Jeffords received a score of 76 percent on a recent League of Conservation Voters score card, Inhofe received a zero.

A look at Inhofe's political donations offers a clue as to what the incoming chairman's priorities will be. According to numbers for the Center for Responsive Politics, Inhofe's top two contributors are the oil and gas and electric utility industries. His voting record reflects the policy priorities of his political donors.

Environmentalists have focused on two other committee chairmen who have poor track records on environmental protection: Incoming Budget chairman Don Nickles, R-Okla., and Energy and Resources chairman Pete Domenici, R-N.M. From his new perch, Domenici is expected to lead a renewed drive to open the Arctic reserve for drilling. And many expect Nickles, another Western senator from an oil state, to use his power as budget chairman to defund conservation projects and cut staff responsible for investigating and enforcing environmental rules.

Domenici has promised to make drilling in the Arctic National Wildlife Refuge a priority for his new committee. The fight over ANWR has been a symbolic focal point of the struggle between industry and conservationists for more than 20 years. Democrats, led by presidential contenders Sen. John Kerry, D-Mass., and Lieberman, have vowed to filibuster any attempt to open the refuge for oil exploration. But Domenici has said he may try to exploit Senate rules that would allow a plan to drill in the Alaskan refuge to pass with only 51 votes. Nickles said he is exploring options to exploit that rule with Domenici.

Even with those efforts, it is unclear whether ANWR drilling would get the votes necessary to clear the Senate. The Senate lost an ANWR defender when Sen. Jean Carnahan lost her seat in Missouri, but gained a vote with the election of Mark Pryor in Arkansas. Though Republicans have picked up at least two seats in the Senate, pending the outcome of next month's Senate race in Louisiana, one of the new GOP freshmen, Norm Coleman of Minnesota, has said he will vote against plans to drill in the refuge.

One thing GOP control of the Senate virtually ensures is a dramatic cut in the budget of the EPA's enforcement division. Soon after taking office, President Bush slashed the budget, cuts which led to Schaeffer's resignation. "It became clear that Bush had little regard for the environment, and even less for enforcing the laws that protect it," he said. But the Senate was able to restore the funding to bring the division back to Clinton-era staffing levels. The Republican-controlled House approved a much smaller restoration, about half of what the Senate had proposed. The issue remains unresolved. But now that Republicans control the Senate, Schaeffer says, the push for full restoration is as good as dead.

"EPA enforcement funding is going to be critical," says Sierra Club spokesman Allen Mattison. "One of the things that industry wants is for the EPA to have no teeth. If environmental enforcement cops don't have money to enforce their investigations, polluters get off scot-free."

Mattison says that while the elections will have some impact on environmental policy, the Bush administration has had the power to make dramatic changes in environmental policy all along. "The question will be whether they read the election results as a mandate to do even more. Our fear is that they've been doing all sorts of nefarious things deep in the bowels of the bureaucracy, and that they will continue that on the legislative level."

Environmental protection seems sure to be a rallying cry for Democrats looking to challenge Bush in 2004. Within minutes of Friday's announcement, Lieberman, Kerry and Sen. John Edwards, D-N.C., all released statements criticizing the new rules. Lieberman called on EPA administrator Whitman to "resign in protest" over the changes, which he called "the biggest rollback in Clean Air Act history." A New York Times/CBS News poll released Friday showed that Americans said they thought that protecting the environment was more important than producing energy, by a ratio of 2-1. That same poll showed, by a 7-1 margin, that Americans think the administration is more concerned with energy exploration than environmental protection.

Mattison found another silver lining in the fact that many of the Republicans elected this year ran as advocates of environmental protection. He points to Coleman's pledge to side with Democrats on the issue of protecting the Arctic National Wildlife Refuge. "Wayne Allard, [R-Colo.], Elizabeth Dole, [R-N.C.] and John Sununu, [R-N.H.] all ran claiming to be environmentalists," Mattison notes. The League of Conservation Voters certainly didn't agree with Allard's assessment. They gave him an 8 percent score on their latest scorecard, and named him one of their "Dirty Dozen." Sununu faired slightly better, earning a score of 36. (Dole was not an elected official and thus had no LCV rating.)

Mattison continued: "The question is, are their actions going to match their words? If they do, we'll praise them to the heavens. If not, we'll be shouting from the mountain tops."

With the Senate now in GOP hands, activists can shout all they want. There just may not be anybody listening who is able, or willing, to do anything about it.