Beauties and the beasts

Islamic fundamentalists opened another front in their war on liberal culture with their bloody Miss World riots in Nigeria. But many feminists and progressives still don't want to hurt their feelings. 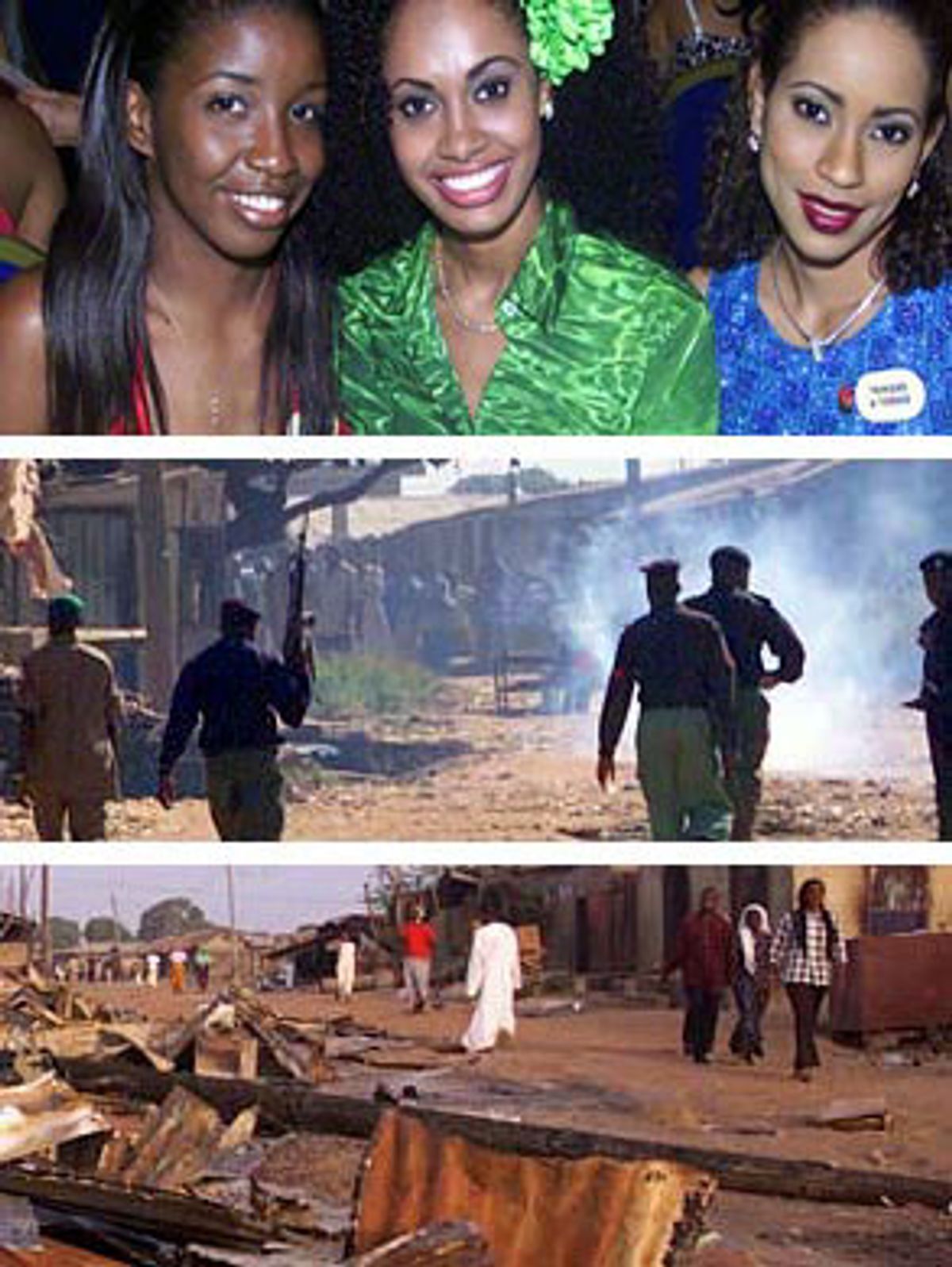 The facts of the case are not in much dispute. A journalist, Isioma Daniel, for the Nigerian newspaper This Day, made a crude reference to the coming Miss World pageant in her column. She wrote last week that Mohammed might approve of the contest since he might pick one of his wives from the throng of beauties. This comment prompted an outpouring of enraged Muslims from a local mosque, who grew into a crowd of rioters. Christians were attacked, dozens of churches were burned, and some Christians fought back. As many as 500 people were killed in the rampage, and there are reports that Christians are now fleeing the area entirely.

The Miss World contest was subsequently transferred to London, and the journalist who wrote for This Day was placed under a fatwa. "What we are saying is that the holy Koran has clearly stated that whoever insults the Prophet of Islam, Mohammed, should be killed," Umar Dangaladima Magaji, the Zamfara state commissioner, told Reuters.

This is now a somewhat familiar story. Radicalized Islam -- on every continent -- is stepping up its assault on Western freedoms. The Miss World contest and This Day are just the latest targets. The act of putting on a beauty pageant or writing a column are now subject to the approval of radical religious fanatics. Those who do not please these fanatics will not be criticized or campaigned against or smeared or railed at. They will be killed. Even those who have nothing to do with either the contest or the column will be killed if they do not share the religious convictions of the Islamists. We've known this since the fatwa against Salman Rushdie -- the first major warning sign that the forces of darkness were gathering, and one we ignored.

So what is our excuse now? In the aftermath of horror, the Washington Post reported early on that "after plans to stage the show in Nigeria sparked Christian-Muslim riots that killed at least 175 people, the organizers moved it to Britain but flew into a storm of protest at home too." "Christian-Muslim riots"? Those are weasel words, obscuring the real responsibility for the murders. The organizers of the Miss World contest also managed to blur the issue. "A journalist made this problem and we hope journalists can put it right," said Julia Morley, Miss World's CEO. Excuse me? The journalist was doing her job. The "problem" -- a rather glib description of the murder of hundreds -- was caused by extreme Islam. And by singling out the journalist, Morley gives a patina of credibility to the disgusting fatwa now lodged against her.

The Arab News predictably blamed the contest: "Though they have attempted to distance themselves from the deadly riots that followed the blasphemy produced by a local newspaper, the tensions that were unleashed had been building for weeks as a direct result of their actions ... The organizers are hinting darkly that they made a mistake in assuming that Nigeria was a sufficiently stable country to host what they keep trying to pretend is a genuine and important international event. Blaming Nigeria, however, is unfair. Of course, those Nigerians who were party to organizing the unseemly parade are certainly guilty of a grievous lack of judgment, the worse because a moment's thought would have told them that even were the event suitable for a country with devout Muslims, the timing was totally inappropriate ... It must be hoped that those who perpetrated this awful mistake will be properly pilloried for their error." No word about the real responsibility for the riots. No word about the right to freedom of expression regardless of religious sensibilities. But this is a Saudi paper, from whom one can hardly expect support for liberalism.

But the mayor of London? Tuesday Ken Livingstone placed the blame squarely on the pageant. "After the violence and terrible loss of life in Nigeria, the staging of a Miss World event in this city is not welcome," Livingstone opined. "It defies belief that after Miss World has brought tragedy and strife to Africa its organisers should think it appropriate to carry on with the razzamataz as if nothing had happened." So Miss World "brought tragedy" to Nigeria? So far as I know, no one connected with Miss World hurt a fly.

Paleo-feminists also blamed the victim. "The best thing to do after such fratricide and blood-letting is to cancel the whole competition," averred Labor deputy Glenda Jackson. Muriel Gray went further and opined that "These girls will be wearing swimwear dripping with blood." Now it's the contestants' fault?

But there has always been a weird overlap between some puritanical, anti-capitalist feminists and radical Muslims. They both hate free societies in which women can choose how they want to present themselves. Jill Nelson summed up this bizarre moral equivalence on MSNBC: "As far as I'm concerned it's equally disrespectful and abusive to have women prancing around a stage in bathing suits for cash or walking the streets shrouded in burkas in order to survive." I can't think of a more fatuous statement after a bloodbath, orchestrated by fanatics who won't allow women the slightest autonomy in their lives.

A columnist in the Guardian, the wonderfully named Ros Coward, argued that the West should respond to attacks on free speech by avoiding offense to bigots: "The Nigeria debacle shows how naive people are about this divide between cultures, especially in a post-Sept. 11 world. A culture where a woman can be stoned to death for adultery clearly contains elements that will not be entranced by a parade of female flesh or the 'modernity' it promises. To hold the contest during Ramadan compounds the insult." Do any of these female journalists worry in print about a fatwa being pronounced on another female journalist, who has succeeded in her work despite being in a brutally misogynist culture? Not so far. Her right to write freely seems not as important as sensitivity to other cultures.

Now imagine a scenario in which, say, the play "Corpus Christi" was produced in New York (as it was). The play was highly offensive to some fundamentalists because it depicted Jesus as gay. What if a mob of enraged Christians, after a holy sermon at a neighboring church, had decided to torch the office of the New York Times because they ran a favorable review, or to burn down the theater? What if they killed hundreds of innocent bystanders in their rage? What if they issued a call to all faithful Christians to kill playwright Terence McNally for his blasphemy? Do you think the rampage would be described as "atheist-Christian riots"? Do you think leftists would call on the playwright to be more sensitive in future? Would the mayor of New York blame the theater? Yet when it comes to a far, far deadlier menace to our freedoms than fundamentalist Christianity, much of the left is silent or, worse, making excuses for this Islamist threat.

This is what cultural relativism, p.c. journalism and decadent feminism amounts to: a failure to grasp that freedom is under attack. The only reason I am writing this column is because I live in a free society. One of the keys to that free society is freedom of the press -- even to be disrespectful, annoying, blasphemous. What just happened in Nigeria is that a newspaper's offices were burned to the ground, a journalist has had a death sentence pronounced on her, and hundreds of people have been killed because of radical Islam's hatred of our freedoms. The propriety, politics and principles of a beauty pageant are utterly irrelevant. If I don't like such a pageant, I have many ways to protest. But killing people isn't one of them. That isn't so hard a line to grasp. So why have so few grasped it?