Online gathering places provide safe harbor for India's gays. But they may prevent some people from coming out. 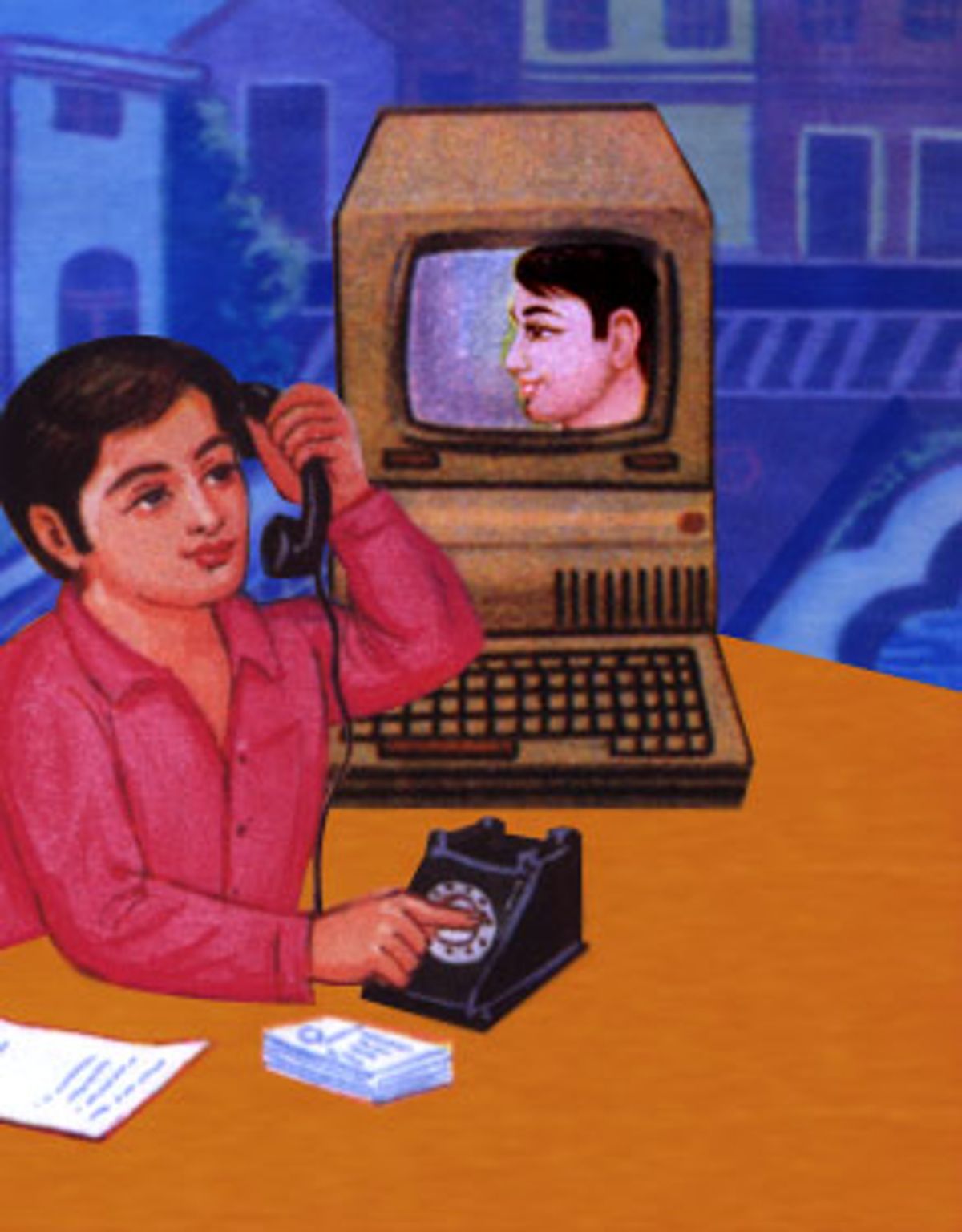 "I am Nikhil," says a bespectacled young man in khaki shorts. "You know, 'GayIndian69' on GB."

"GB" is GayBombay, a gay e-mail group literally springing to life before me in a sweltering rented hall. The smell of sweat, cologne and rich chicken tikka masala from a buffet is making my head spin.

More than 350 men are moving to the thumping beats of the latest hits from Bombay and New York. Most of them came to know about this party, indeed about each other, through the Web. In a country with no official gay bars, where gay sex is still criminal, the Internet has revolutionized gay life.

But even as it makes for resoundingly successful parties, some say the Internet comes with a price: It can keep gay men from really coming out.

Bombay has a gay group, the Humsafar Trust, which owns a drop-in center and publishes a magazine. But the online world has its own allure. Bhavesh (one name only, at his request), who set up the original GayBombay Web site, explains, "It was a safe way to access gay material and connect with other gay men while still remaining anonymous."

When gay men in Delhi first tried to gather at a cafe in the 1980s, one carried a red rose so others could find the right group. GayBombay, on the other hand, easily clicked into life online. Even its founder did not have to come out. Now, gay men could find each other without the risk of being outed while cruising public parks and toilets.

The risk is real. Four AIDS outreach workers were arrested in 2001 in a cruising area in Lucknow and charged with conspiring to commit "unnatural sexual acts." Many more incidents never make the news because police let gays off for bribes.

Vikram, a journalist in Bombay, knew about the Humsafar Trust for seven years but was too scared to drop in. Now he posts almost every day on GayBombay, where more than 1,500 subscribers exchange everything from recipes to jokes to "agony aunt"-style questions about family pressures to marry.

Women in India, who still have less access to the Internet than men, are generally not a big part of the online groups.

Bindu Khire, once a software engineer in Silicon Valley, is trying to start an offline, brick-and-mortar gay support group in his old hometown, Pune. Like almost every other midsize Indian city, Pune has its own Internet gay group. Khire knows it's much easier for someone to post messages online than to walk into his office or even call him.

"They find it a big risk to take the first step to approach the organization. But it is also a first step in the coming-out process," Khire says. Gay men can meet other men and hook up for dates or sex without ever coming to a group like his. "Since they are afraid to meet anyone for counseling or to attend a meeting, they may have their sexual urges addressed yet remain uncomfortable about their sexuality," he says.

As HIV infections skyrocket in India, others worry that cyber-gays have little access to the safe-sex messages and condom packs they could find at drop-in centers such as the Humsafar Trust.

Ashok Row Kavi, who founded the Humsafar Trust, thinks cyber-groups are no substitute for real organizing. "Cyber-activists are paper tigers," he says. "At best, the Internet can pass on news at the speed of light. At worst, it is a lazy activist's dream. You show much work with no sweat."

But Vikram says the GayBombayites aren't traditional activists. "You won't find them marching in the streets or doing anything too overt. They have too much to lose," he says. While Humsafar Trust might be doing safe-sex outreach in railway station toilets, GayBombay is trying to put together parents' meetings and video nights (no pornographic films allowed).

Vikram thinks most activist groups are so focused on the HIV/AIDS epidemic that they cannot really respond to social needs.

"The social stuff is activism, too, and particularly important because the need to build the awareness that we exist is as important as the lobbying that traditional activism does," he says.

Some activists fear that even as it allows men to find friends, boyfriends or tricks, the Internet will put them all in a giant virtual closet. Already some members have asked GayBombay's moderators to take the word "gay" off their e-mail handles for greater anonymity when surfing cybercafes.

That request was denied. But the group definitely wants to blend in. True to their clean-cut, middle-class image, the first time some GayBombayites decided to meet in person, they chose the blandest, most family-friendly venue they could think of: McDonald's.

This is not the old Stonewall model of in-your-face drag queen activism. In fact, GayBombay parties discourage drag.

But the 350 men dancing like there's no tomorrow don't seem to mind. I know that tomorrow this place will be just another hall amid the bustle of taxis, auto-rickshaws and raucous vendors. GayIndian69 and his friends will have vanished into the safety of the Internet, waiting for that e-mail about the next GayBombay party or bowling night.