Just like its naughty priest, the biggest movie in Mexico is so taken with the heaving breasts of its leading lady that it can't think straight. 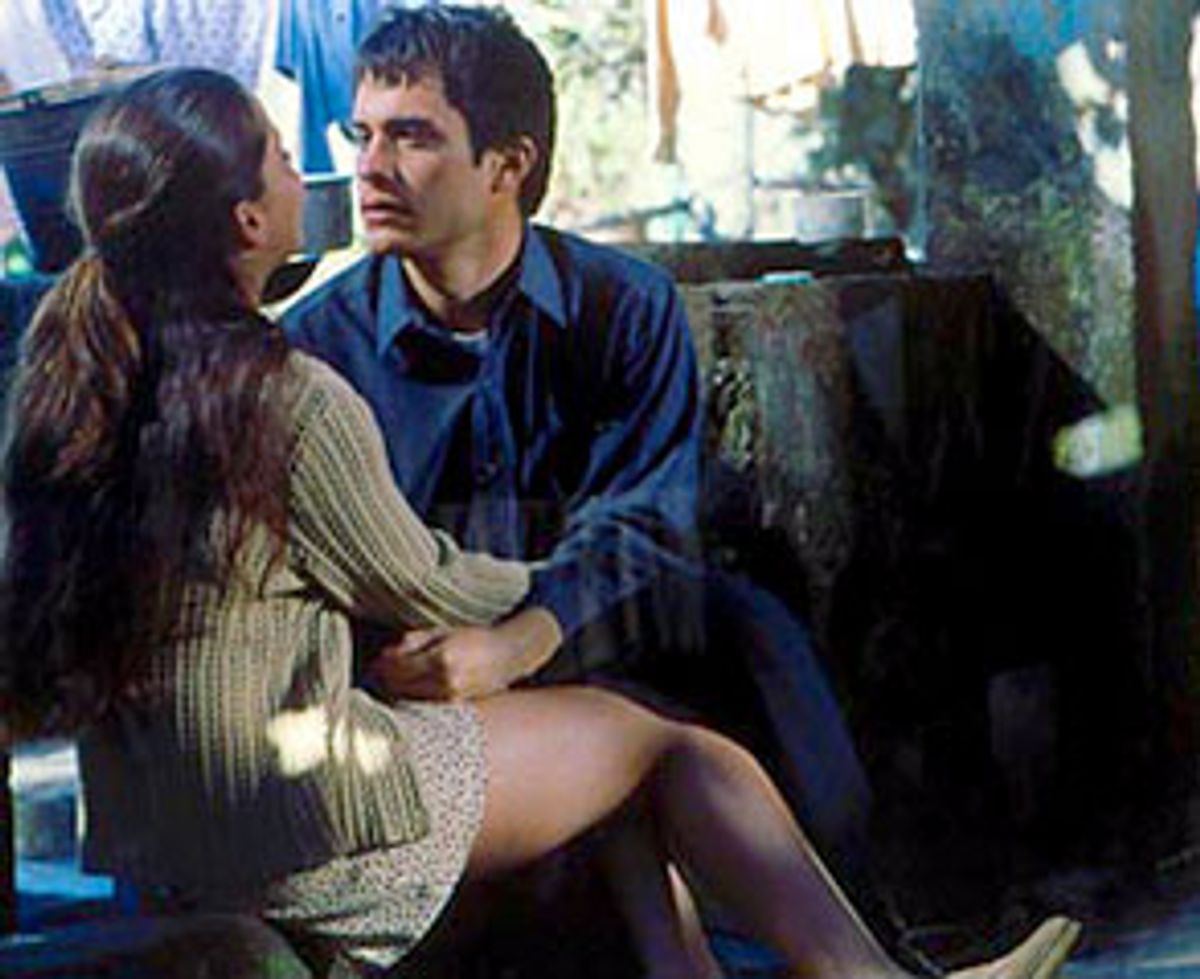 "El Crimen del Padre Amaro," Carlos Carrera's picture about a young priest who has an affair with a 16-year-old girl in the small Mexican parish to which he has been assigned, caused a huge flap when it opened in Mexico earlier this year. Not surprisingly, it also went on to become one of the highest-grossing films ever in that country. The movie is brash about forbidden sex all right: In one scene, the priest drapes the girl's curvaceous form in a starry blue robe that a devout parishioner has crafted specially for the local church's statue of the virgin Mary. "You're more beautiful than the blessed virgin," he tells her in a husky whisper. A pious girl herself, she beams with joy: Mingling religion and sex, she and her cassocked cutie have found two great tastes that go great together.

But in between the high camp of moments like that one (there's another in which the girl murmurs, in the confessional no less, that when she's alone she touches herself and thinks of -- gasp! -- Jesus), "El Crimen del Padre Amaro" is curiously inert. It's vaguely satirical in places -- the problem is, it's hard to tell which places. Carrera doesn't have enough control over the movie's tone to make his intentions clear. The picture's political stance is at least feebly interesting: Made in a country where the Catholic Church holds significant sway over how people live, "El Crimen del Padre Amaro" dares to poke a crudely sharpened stick at the kinds of laziness and corruption that have been known to flourish within the church's ranks.

But it's a movie that's more about the idea of controversy than the thing itself. We've got priests flouting their vows of celibacy and priests accepting money from drug lords in order to build healthcare facilities, and overlooking this little kingdom of depravity is a big fat bishop who seems to have declared "When in doubt, look the other way" the 11th commandment. But even though "El Crimen del Padre Amaro" sends up the flare ("Stop the presses! A monolithic and influential worldwide organization employs foot soldiers who sometimes abuse their power!"), it doesn't attempt to make sense of the sparks that fly off it; instead, it stands back passively as they rain down any old which way.

The story is set in the present day, although it's based on a late 19th century novel by the Portuguese writer Eça de Queirós. Even so, it has a fairy-tale soap opera feel -- it doesn't feel either pleasingly old-fashioned or completely modern, but stuck somewhere in the middle. Its style is borrowed unapologetically from florid TV novellas, and yet it's disappointingly juiceless.

The big selling point of "El Crimen del Padre Amaro" is most certainly the affair between the unrepentantly dishy Father Amaro (Gael García Bernal, of "Amores Perros" and "Y Tu Mamá También") and the sensuously pious schoolgirl Amelia (Ana Claudia Talancón). Trust me: Naughty schoolgirls will always pack 'em in. Father Amaro has just arrived in the small town of Los Reyes at the behest of the bishop to help out the aging Father Benito (Sancho Gracia), who seems to be conscientious enough as a priest, aside from the fact that he's been knowingly accepting money from drug lords (channeled through the town's mayor) for one of his pet charities. And, as it turns out, Father Amaro can't be held responsible for importing the concept of priest-civilian sex to the tiny town of Los Reyes anyway: Father Benito has been getting it on with the voluptuous Sanjuanera (Angelica Aragon), Amelia's mother, for years.

The movie's subplots about corruption and questionable moral practices (there's another one about a local priest who is very serious about helping the poorer, needier people of the countryside, but who is also suspected of funding the activities of dangerous guerrillas) may be the real meat and potatoes of the movie's wobbly political message. But they end up feeling like the business you have to wade through to get to the racier story of the illicit union between the man of the cloth and the girl of the miniskirt. "El Crimen del Padre Amaro" feels as if it was carefully engineered to attract attention rather than to make people think. Moviegoers sometimes believe that movies with political content are by their very nature political -- that a movie that "raises issues" is somehow doing a grand public service.

But any filmmaker can raise issues. Isn't it even more crucial to give them shape and meaning? Carrera doesn't know what to do with the tangled moral threads of "El Crimen del Padre Amaro," and so he just lets them hang limply. The point, the movie's defenders might say, is that we must draw our own conclusions. But if the conclusion is little more than, "Well-meaning guys can do some really bad stuff, in the name of God or otherwise," have we really learned anything?

But enough about political morality. Inquiring minds really just want to know if the sex is hot. And the answer is, kind of. Bernal is a quiet and intense actor, and his early scenes here -- where we see him performing acts of kindness that suggest a genuine-to-the-core goodness -- suggest that he's going to show us some remarkable layers of depth and complexity. But when he finally seduces Amelia (he finds a room for them to meet, telling anyone who asks that he's training her to become a nun), the best he can do is lay some handily memorized "Song of Songs" stuff on her about her breasts being like twin goats or somesuch. It's enough to make you nostalgic for Rod McKuen.

The big problem with "El Crimen del Padre Amaro" is that Father Amaro doesn't have any depth. Bernal, Carrera and Vicente Leñero, who adapted the screenplay, all lead us to think that we're going to learn something about this complicated man, a man who's devoted to serving the Lord but who also boldly refuses to deny his sexuality. It's potentially fascinating territory. But in the end, Father Amaro is just a schmuck who wants to get his rocks off -- and doesn't even bother to use a condom. Maybe the message is simply that Father Amaro is the worst kind of hypocrite. But even hypocrites can be morally complex; it's what makes them interesting, after all. But there's not much subtlety at work in "El Crimen del Padre Amaro." Just like Father Amaro, the movie is so taken with the heaving breasts of its leading lady that it can't think straight.

For me, as a long-lapsed Catholic, the best and most shocking moment in "El Crimen del Padre Amaro" was the sight of the local "witch," a woman with a confused sense of the divine and the occult, feeding a stolen consecrated host to one of her sickly cats. The skinny creature chomps down on that pristine white wafer with feral gusto -- now there's a cat who knows how to live.

The humans in "El Crimen del Padre Amaro" don't have it nearly as good. The movie's sense of right and wrong, of what's beneficial and what's harmful, is stultifyingly old-fashioned. By the movie's end, almost everyone who has done wrong is punished in one way or another, if only by being made to suffer the crushing weight of guilt. "El Crimen del Padre Amaro" ends up being nothing more than a stifling morality tale dressed up in peekaboo clothing. It's an allegedly anti-Catholic movie that is ultimately very, very Catholic, and it teaches us a very important lesson in the catechism of moviegoing: You can wrap a pretty girl up in a blue cloak. But that don't make her the virgin Mary.