President Bush wants welfare recipients to marry -- but not have kids. 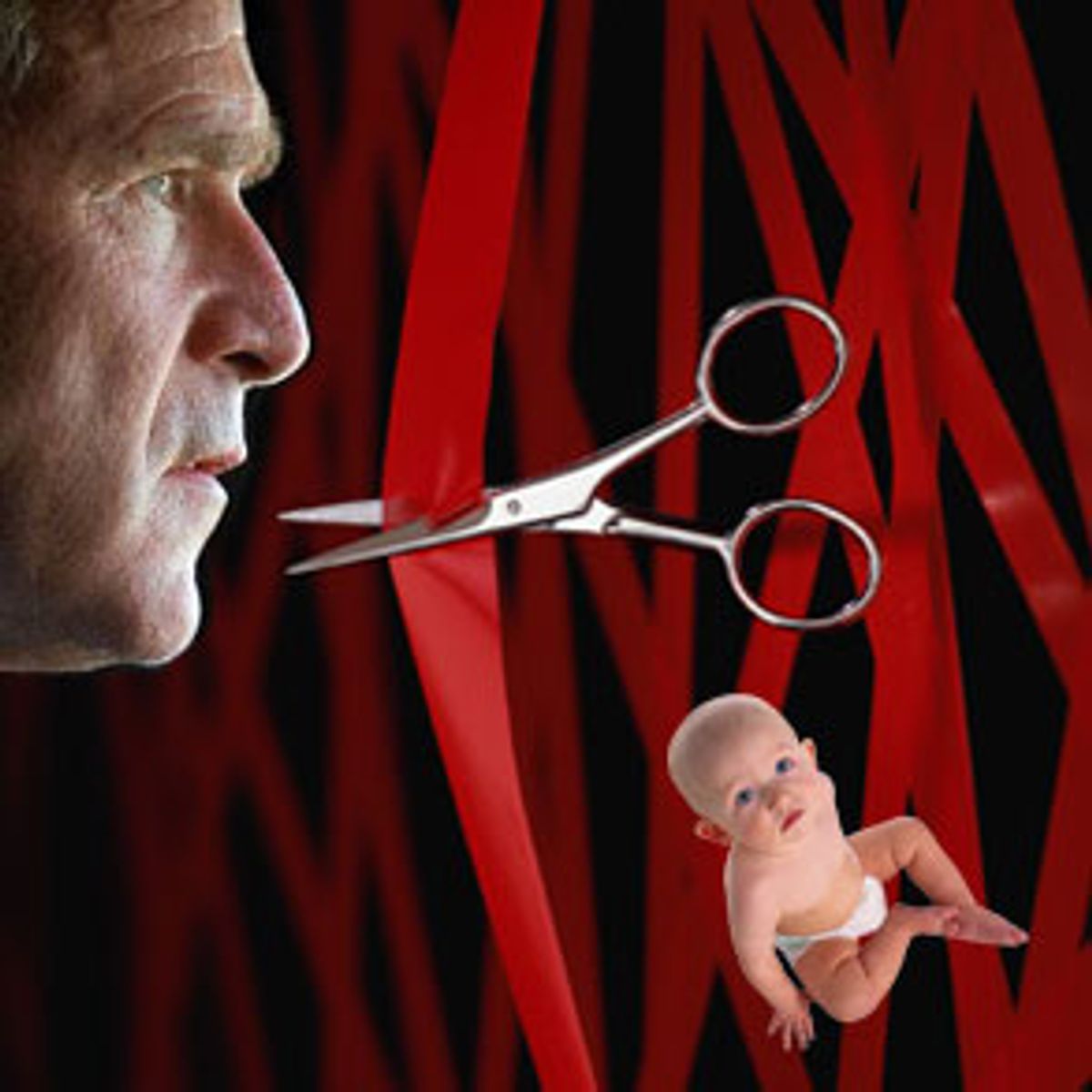 I am one of those people who believe that President Bush's war on terrorism constitutes, among other things, a very impressive distraction for Americans who might otherwise pay attention to scary federal policy changes. So successful is this adrenaline-packed diversion that we have missed not only significant political maneuvers, but also a flurry of environmental rollbacks that rush us, unceremoniously, down the path to extinction.

In at least one case, however, it isn't distraction as much as confusion that paralyzes us as a new policy is ushered in and another is quietly abolished. Specifically, I refer to the repeal, announced Tuesday, of the Birth and Adoption Unemployment Compensation Rule, a measure that allows states to use unemployment benefits to pay workers who take unpaid leave to care for a new baby.

I tried to get my head around this one; but the sly contradictions and double double-crosses inherent in the announcement make it difficult. Basically, we have reached that point in the movie where the gullible patsy sits down, eyebrows knit, and says to the smirking psychopath: "Now let me get this straight ... " I will, in the role of spokesperson for gullible patsies nationwide, say it to President Bush (without implying, of course, that he is a smirking psychopath):

Now let me get this straight.

This administration, in relentless pursuit of a religion-based conservative agenda, has used every means possible to undermine a woman's constitutional right to abortion, ban sex education that acknowledges the existence of sex, and promote marriage. Bush has used federal health policy, high-ranking committee appointments, as well as hundreds of millions of dollars in funding for abstinence-only and marriage-promotion programs to accomplish these goals. And now, in a move advertised as a way to keep the jobless happy, the president has eliminated a way for struggling families with employed parents to have children without descending into poverty.

There is much to be confused about here. Does this mean that poor Americans ensconced in the welfare-to-work program, who are being offered government money to get married, are not supposed to have children? What if they get pregnant? Does it mean that by having children they forfeit their right to care for them for the first few months of their lives?

Sadly, the Birth and Adoption Unemployment Compensation Rule has never been used by states to compensate workers who take family leave. Only California offers paid leave, and the compensation doesn't come from unemployment insurance reserves. But efforts to use the rule were under consideration in as many as 16 states when its repeal was announced, and its very existence fostered hope that the consideration of family values initiated by the 1993 Family and Medical Leave Act, which allows unpaid leave for new parents, would be extended to struggling mothers and fathers. As humane as the offer of unpaid leave may be, it is still only viable for couples with financial reserves.

Given that state unemployment insurance reserves were not in fact being tapped to pay for family leave, it becomes a symbolic act to eliminate the rule. As to what is being symbolized -- it depends on whom you ask. According to Emily Stover DeRocco, assistant labor secretary for employment and training, getting rid of the rule "removes the impetus for individuals, be they members of the public or legislators, to encourage the use of the trust fund specifically for this purpose." In other words, the idea of states' rights has its appeal, but in reality, the states simply can't be trusted to do the right thing with unemployment insurance funding. And the public, apparently, becomes a looting horde of greedy prospective parents when it comes to money for the jobless.

For American business groups, the repeal is an early Christmas present, one more gesture that solidifies the warm bond between Bush and the United States Chamber of Commerce. Business folks hated the rule, believing it to be an unfair addition to their tax burden, and had fought it for three years. Here, of course, there is no room for confusion in interpreting the move: These dismal days, corporate desire trumps public need with pathetic consistency where federal funding is concerned.

Finally, there is symbolism in the repeal for American workers, and, in particular, working parents. The symbol, according to unions, family rights advocates, and women's and fathers' groups, is both familiar and profane: middle finger stiffly extended. And it is a strange and insulting message: We must protect funds for the unemployed by withdrawing the means for struggling working parents to stay in the workplace while raising a family. Best to lose your job and run a tab at the local clinic, it seems.

But where are the pro-lifers on this one? After all, it would not be hard to interpret this move as a pro-abortion policy. Pro-choice activists, as murderous as they are alleged to be by their opponents, are in favor of choice, not the economic strong-arming of individuals into not having children. The National Abortion and Reproductive Rights Action League has not yet proposed a national statute that would mandate financial hardship for those who do not choose to be childless. Strangely, pro-life Republicans have been silent on the move, and so have ardent defenders of states' rights.

This development, like so many in the past months, will likely slip under the radar, never to elicit the outrage, much less debate, of the Americans directly affected by it -- or anyone else. News stories about it were tiny; none suggested that the repeal of the Birth and Adoption Unemployment Compensation Rule is another blow in a beating that may snuff out any chance of progressive, or even humane, measures to promote family, women's, parents', children's or workers' rights. Heck, it doesn't even do much for the "rights of the unborn," a debatable concept at the heart of some of Bush's new federal health policies.

For those who care -- for anyone who grew fond of the Birth and Adoption Unemployment Compensation Rule and what it might have promised -- I hereby mark its passing. Born in June 2000, executed this week, it was a missed opportunity for compassion -- and family values -- to be enshrined in law. It was a lost chance for parents who struggled out of the welfare system to have families, bonding time, and income.

But I hesitate to suggest that the rule rest in peace. Instead, it is my fervent hope that it will be revived. And in this regard, I am not unlike George Bush, a man with fundamental religious tendencies. I believe in miracles.