The mobster-shrink sequel cracks wise for 15 minutes then puts on a pair of concrete shoes and takes comedy out for a cruise. 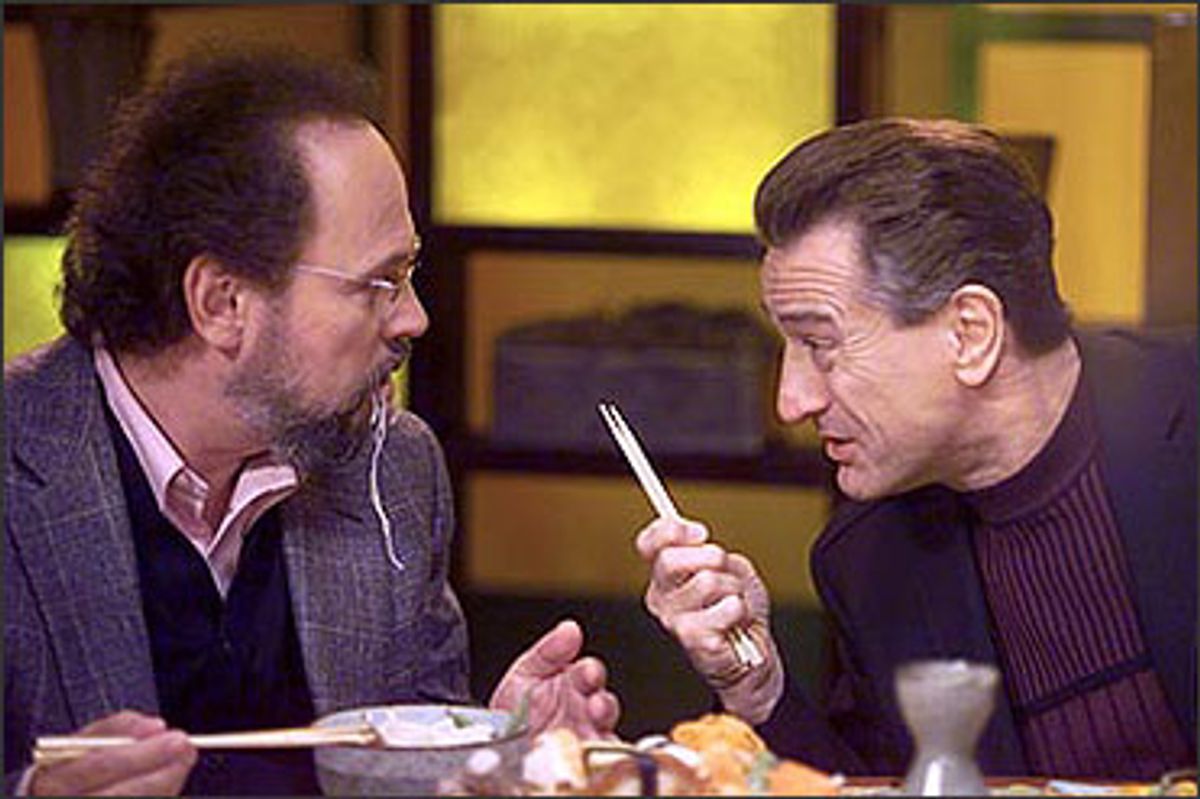 There's nothing wrong with a comedy resorting to shtick as long as it's funny shtick. In fact, if you're trading in predictable bits and ethnic wisecracks, you've got to be more on top of your game, willing to bring the proceedings the energy that will knock each punch line out of the park. Probably the funniest, most sustained example of shtick in the movies is Mel Brooks' underrated "History of the World, Part I." Brooks gathered his stock company and an assortment of Vegas comics to revel in the oldest, raunchiest bits around. (Sample gag: Roman soldiers, led of course by Shecky Greene, are hunting Mel and company, who are dressed in Trojan drag. They run by an apothecary's shop as the proprietor, Henny Youngman, is coming out and accost him with the question, "Chemist! I say, chemist! Have you seen a pack of Trojans around here?") To pull off shtick, you have to have no consideration for good taste, and all the raunchy gusto and crack vaudeville timing you can muster.

For about 15 minutes, "Analyze That," the sequel to "Analyze This," offers a parade of shtick. Robert De Niro, as the now incarcerated mob boss Paul Vitti, handles the Italian shtick, and Billy Crystal, as Ben Sobol, his shrink, who is just coping with the death of his father, handles the Jewish shtick. Vitti, who finds himself the target of a mob hit in prison, contrives to get out by pretending to be crazy and getting himself released in the custody of Ben. The feds, believing that Vitti is bluffing, figure that if they keep tabs on him while he's out, he can lead them to the mob kingpins they haven't been able to nab. But they warn Ben that he's responsible for Vitti, and any funny business will result in his being prosecuted.

A few years back the New York tabloids were full of stories about a wily Mafia don who played the crazy game, shuffling everywhere in his ratty robe and pajamas, acting catatonic, all while having his lawyers argue he was too feeble and mentally incompetent to be prosecuted. De Niro's Vitti plays off that in the opening scenes. He lets his mug sag forward like a pile of Silly Putty, shuffles and mugs, only coming to life to regale his watchers with selections from "West Side Story." There's a great bit near the beginning where Crystal, wanting to see if De Niro is playing possum, grabs De Niro's face and pushes it around in his hands, makes Three Stooges noises and hand gestures inches from his eyes, even jabs a needle into him. The joke of the routine is seeing how long De Niro can keep a straight face, and you can feel that challenge sending Crystal into overdrive. The screenwriters -- director Harold Ramis, Peter Steinfeld and Peter Tolan -- even come up with some prize one-liners. Told by a prison doctor that Vitti has been given 300 milligrams of Thorazine to keep him calm, Crystal blurts out, "That's enough to keep the Middle East calm." It's all very crude and very funny. All that's missing from each joke is a perfectly timed rimshot to send it home.

But just when you're settling in, the movie stalls and never recovers. The screenwriters introduce all sorts of possibilities only to toss them away. As Crystal's wife who makes no secret of her distaste for Vitti, Lisa Kudrow has nothing to do, and the movie offers a few lame gags about the commotion Vitti causes by having to move in with Ben. (Though De Niro gets off one raunchy beauty when he explains to Crystal that it wasn't home cooking he was thinking of during his two and a half years in prison -- at least not the kind you do in the kitchen.) And with the feds watching Vitti, you'd think there would be some close-call gags where they almost happen upon him acting anything but gaga.

Instead the movie trails off into a subplot about the war for control of the New York mobs featuring Cathy Moriarty, now billing herself as Cathy Moriarty-Gentile (could Crystal have made a joke about that!), as a mob widow angling to become head honcho by eliminating the competition. Moriarty made her movie debut opposite De Niro in 1980's "Raging Bull," but even a little inside joke seems beyond the capabilities of the filmmakers. Vitti gets a job as consultant on a mob show (obviously based on "The Sopranos") and the filmmakers resort to Hollywood gags instead of spoofing the show.

Nothing here seems as funny as it did in "Analyze This," not even Joe Viterelli as De Niro's right-hand goombah. Viterelli, whose enormous build is encased in pinstripe suits making him look as if the Michelin Man were moonlighting as a hit man, hit notes of comic obliviousness in the first film that can still make me chuckle when I recall them. He seems aware of how funny he's meant to be here without actually being funny.

The most surprising thing about the movie is the clumsiness of Harold Ramis' direction. Ramis has never equaled the work he did on "Groundhog Day," but if there's been one thing consistent about his work in pictures like "Multiplicity," "Analyze This" and the underrated remake of "Bedazzled" with Elizabeth Hurley's hell-raising performance, it's been something like sweetness, or what passes for it today when louder is thought to equal funnier. Ramis has never quite descended to this sort of boffo laugh-getting before. His pacing is off, and his talent for offhand gags that catch you on the rebound is nowhere in sight. Movie comedy isn't in such great shape that we can afford to have one of the few commercial directors who showed anything even close to a sensibility join the ranks of the hacks who are willing to bop you over the head for a laugh.