Idiocy of the week: The editors of the Times confuse Tiger Woods with Rosa Parks -- and journalism with ideology. 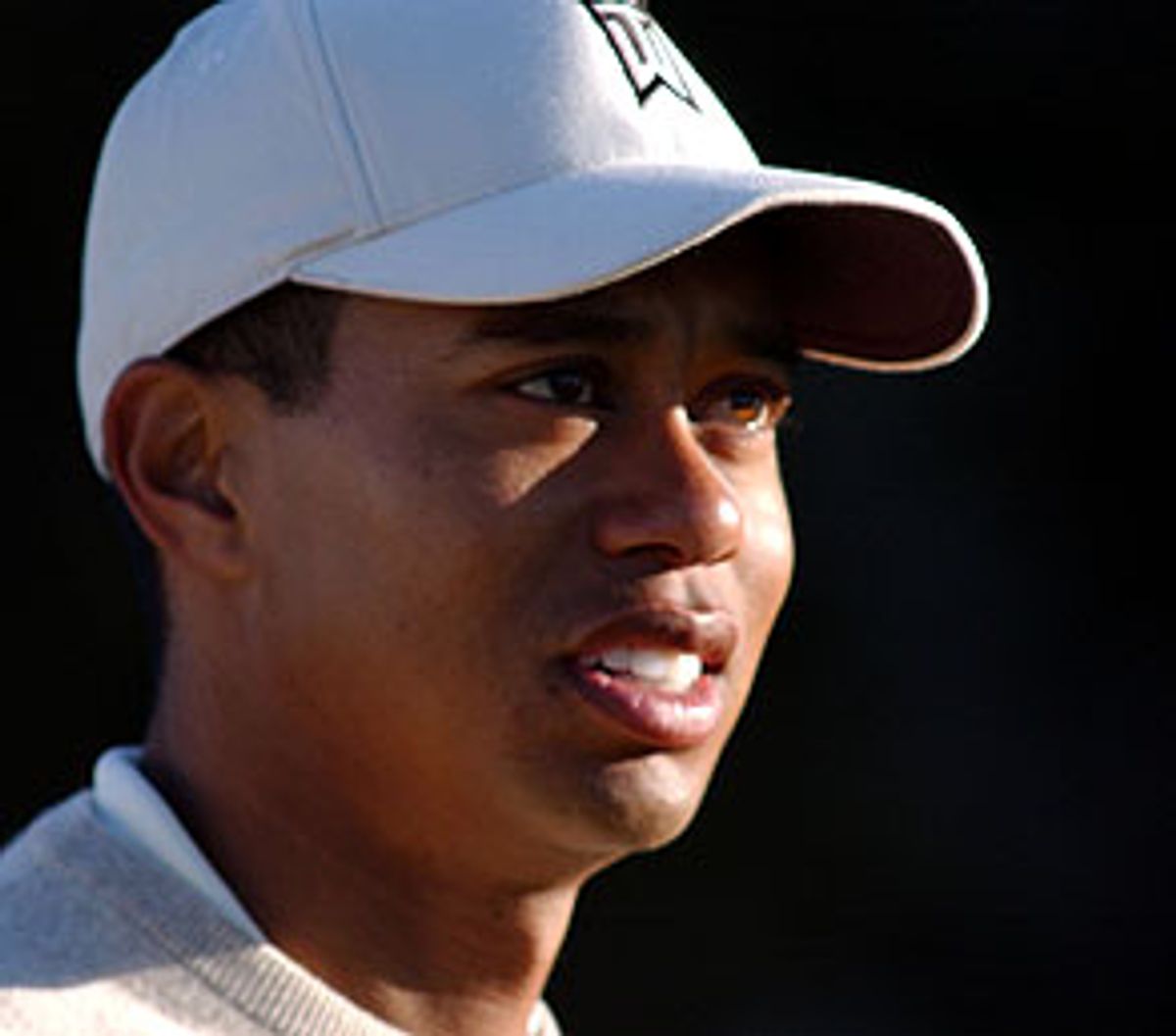 From a memo to the staff of the New York Times, written by Times managing editor Gerald Boyd:

Howell [Raines, Times executive editor] and I believe you should know The Times's response to questions that have been raised by some published reports in recent days about our coverage of the Augusta Golf Club story and our handling of sports columns on the subject.

Translation: Once again, all hell has broken loose because of Raines' dictatorial, paranoid managing style. And once again, just as I did when the Washington bureau exploded a while back, I have to go and do damage control.

First, we are proud of our leadership in covering this story. Our sports staff, with help from many desks, is doing exactly what some "accuse" us of doing: asking questions that no other organization is raising, and pressing energetically for the answers our readers want.

Great! An admission! The Times has been pursuing this story because it's on a crusade -- not because the news is out there.

But what does he mean by "questions that no other organization is raising"? Many other media outlets have covered the Augusta story and asked exactly the same questions that the Times has. The Atlanta Journal Constitution, for example, has run 37 pieces on the story, the L.A. Times has run 27, USA Today has run 24, and the Washington Post has run 22. The difference is that those papers didn't seize on the story as a political campaign, blurring editorial positions with news stories, and blasting minor events, like the resignation of one club member, with big headlines. What distinguishes the Raines Times is not its "flooding the zone" with stories on a subject (which can sometimes be a very good thing). What distinguishes it is the blatant editorializing and no-dissent-allowed ethos that is now a hallmark of what was once the paper of record.

And what does he mean by "the answers our readers want"? Is he clairvoyant? Is he aware of a seething populist groundswell demanding that the Augusta National Golf Club be a central focus for the New York Times' vast reportorial capacity? Can we say "cocoon"? The correct translation: "pressing energetically for the answers our executive editor wants."

Augusta's restricted membership policies have been legitimate news for decades. With the ascendance of Tiger Woods and the campaign by the National Council of Women's Organizations, the club has become an inescapable story.

How on earth is the ascendance of Tiger Woods relevant here? It's only relevant if you believe that somehow members of a racial minority are required merely by virtue of the color of their skin to hold a particular politics. But Woods explicitly disavows the notion of himself as crudely "black," or even that his race is a critical part of his identity. So by what right do Raines and Boyd corral him into their own crusade? This political co-optation of someone on the sole basis of his race is itself a form of racial condescension. The man's a golfer. If he doesn't want this to be his cause, why should the Times foist it upon him? Whatever Boyd says, Tiger Woods' emergence as a golfer does not make this story "inescapable." To argue that is to make an ideological leap. That's not neutral journalism. Call it what it is: ideology.

Ditto for the National Council of Women's Organizations. Lobby groups seize on issues all the time. The Times and other papers routinely ignore them and pursue the news that's out there -- not the news that activist groups want them to pursue. You can do it of course. But it's not news journalism as traditionally understood. It's political campaigning under the guise of journalism.

The decisions faced by CBS, a leading network that is a 46-year Masters partner of the club, are a significant part of the story.

What decisions? CBS has made none. What the Times ran was a story on CBS' silence. In fact, that was the most egregious reach of the whole fiasco.

There is only one word for our vigor in pursuing a story -- whether in Afghanistan or Augusta.

Is Boyd saying that the war in Afghanistan, a result of one of the most epochal events in recent American history, is on the same newsworthy scale as the question of whether a few wealthy women can join a 300-member private golf club in Georgia? Is he out of his mind?

Columnists in the news pages hold a special place at The Times. Each has wide latitude to speak with an individual point of view, always informed by diligent reporting and intelligent reasoning. In the sports pages, columnists have unique license to go beyond analytical writing and -- still informed by their reporting -- engage in robust argument, even express personal opinions on any side of an issue, within the bounds of sport, broadly defined.

Still, these columns are not on the Op-Ed page, and all newsroom writers are subject to our standards of tone, taste and relevance to the subject at hand. We are an edited newspaper: that is one of our strengths, and we believe our staff takes pride in it.

Translation: You're free to write what you want, but we get veto power. So watch what you write. If you know what's good for you, you won't rub Raines the wrong way. The only people we really let rip -- make errors, invent fantasies and so on -- are on the Op-Ed page. But they've all been vetted. There's no chance that Krugman, Kristof, Dowd, et al., are going to write something that truly dissents from Raines' line. The exception is Safire, but we inherited him. What can you do? Oh, and this applies to freelancers too. Anyone who wants to be published in the Times cannot criticize the Times -- even if we're drastically reshaping the paper in controversial ways that are sparking a national conversation. If you dissent, you're out.

Recently we spiked two sports columns that touched on the Augusta issue. We were not concerned with which "side" the writers were on. A well-reported, well-reasoned column can come down on any side, with our welcome.

Am I wrong -- or did he just insult one of his own Pulitzer Prize-winning journalists?

One of the columns focused centrally on disputing The Times's editorials about Augusta. Part of our strict separation between the news and editorial pages entails not attacking each other. Intramural quarreling of that kind is unseemly and self-absorbed. Discussion of editorials may arise when we report on an issue; fair enough. But we do not think they should be the issue.

Let's unpack that. A "strict separation" between news and editorial means, according to Boyd, that they should not attack each other. But, as Mickey Kaus has noted, shouldn't a real "strict separation" mean that each side can say what the hell it wants -- even about the other? If they're strictly separated, they should be completely independent. Yet this traditional, strict separation between news and editorial is described by Boyd as "unseemly and self-absorbed." How about self-confident and robust? One of the signs of a great paper or magazine -- one that's secure in its identity -- is that, far from chilling internal debate, it welcomes it, encourages it, revels in it. By publishing differing views within its own ranks, a paper shows just how open to debate it really is.

In the case of this column, the writer had previously dealt with the Augusta controversy at least twice, arguing on October 6 against pressuring the golf club to admit women. His freedom to argue that way was not -- is not -- in question.

This is a bald-faced lie. Dave Anderson's Oct. 6 column was a model of careful reporting, presenting both sides of the case with no obvious editorializing at all. The fact that Raines and Boyd could read it as an attack on their crusade shows just how paranoid, insecure and intolerant they really are.

The other spiked column [by Harvey Araton] tried to draw a connection between the Augusta issue and the elimination of women's softball from the Olympics. The logic did not meet our standards: that would have been true regardless of which "side" the writer had taken on Augusta. The writer was invited to try again, but we did not think the logic improved materially.

Apologies, Comrade Trotsky. Your views, while bracing, do not really meet our standards of logic. It is illogical, after all, to support an exclusionary bigoted bastion of Southern prejudice or to relate it to other gender issues in sport. Perhaps some illogical counter-revolutionaries have infected your thinking. We will be happy to give you some lessons in logic if you so wish. And as you know, our standards at the Times are rigorous. Comrade Dowd and Comrade Krugman will be happy to show you how to improve your logical skills.

None of what appears here should be taken as criticism of our columnists, whose work we value tremendously.

Except when they disagree with us or appear incapable of making logical connections.

And we would be happy to discuss our thinking over lunch or in any appropriate setting. Perhaps we need better-understood definitions or a more pronounced sense of column boundaries.

At any rate, we hope no member of our staff really needs this assurance that our news columns enforce no "party line." But all of you are welcome to come and talk with us whenever you have concerns or want to hear ours.

If no member if his staff needed such a reassurance, would this memo have been written at all? Times journalists are not fools. And did you catch that last little threat: "whenever you have concerns or want to hear ours." What are Raines' and Boyd's concerns, exactly? That some of their writers aren't fully onboard with the new, crusading Times? It should send a chill down any journalist's spine.

But we might as well get used to it. The tolerant, permissive days of Lelyveld are over. Raines controls both the news pages and the pliant (though officially equal) editorial page editor, Gail Collins. He equates disagreeing with him with illogic. And he clearly loves wielding this power. Publisher Arthur Sulzberger Jr. chose to go this route (over the more restrained and decent Bill Keller) and presumably backs Raines. Moreover, a clearly campaigning leftist paper -- merging news and comment into a single uniform daily lecture -- could truly be successful. There's a void out there now for left-liberal politics. Raines' Times could do extremely well filling it. Pity it will trash decades of hard-won reliability, decency and journalistic integrity to get there.