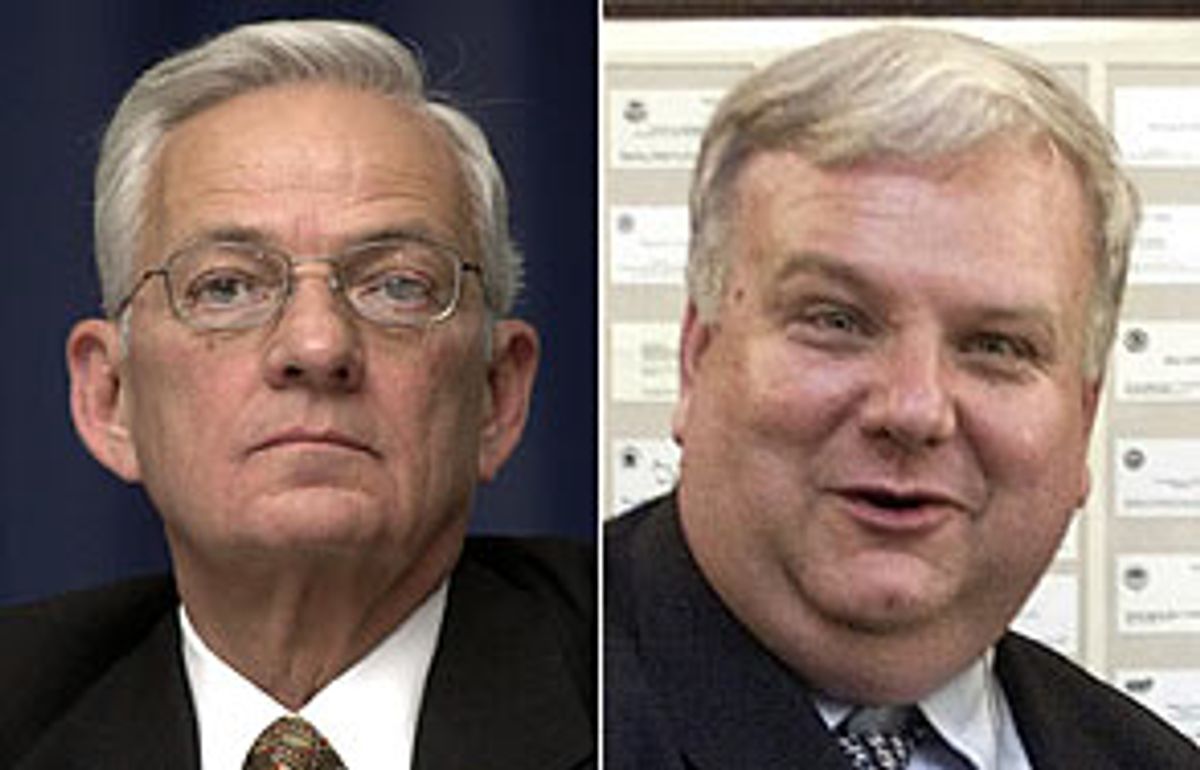 For months, speculation has brewed over which members of Bush's economic team might be cut loose. The internal fight has been described as a clash of both personality and policy between Treasury Secretary Paul O'Neill and White House economic director Larry Lindsey. Friday, the speculation ended quickly: Both men resigned, at the administration's request.

The fight between Lindsey and O'Neill became very public in a column written by Robert Novak last month. Novak, a Lindsey supporter, wrote that Lindsey had been "mercilessly battered and blamed in newspaper accounts for lack of a dynamic Bush economic policy." Novak blamed Glenn Hubbard, the chairman of the president's Council of Economic Advisers, as the source of the anti-Lindsey attacks. "Friends of Lindsey are more than suspicious," Novak wrote. "They claim hard information that Hubbard, on leave as a Columbia University economics professor, has waged a disinformation campaign against his colleague."

Alan Reynolds, senior policy analyst at the Cato Institute, says that the column may have lead to Lindsey's dismissal. "This administration does not like to air its dirty laundry in public, period," he said. "And there was a lot of talk that those 'friends of Lindsey' were really Lindsey himself."

Though talk of a shakeup had been rumored for weeks, the dual exit caught some administration watchers by surprise. Not only is it is the first major retooling of the Bush cabinet, but it also does what Democrats could not do during the midterm elections: focus attention on the White House's unsuccessful efforts to jump-start the stalled economy.

Democrats were quick to point out Friday that the firings were a tacit admission of what Democrats had tried to enunciate during the midterm elections -- and will say as they approach 2004: Bush's economic plan has failed. Leading Democrats, including many of those who may run against Bush, have called Bush's 2001 tax cut plan a giveaway to the wealthiest Americans and have called instead for targeted tax cuts aimed at the middle class.

"Firing its economic team is an overdue admission by the Bush administration that its economic policies have failed," said Senate Minority Leader Tom Daschle, D-S.D. "However, the fundamental problem is that this administration has no comprehensive plan to get the economy back on track."

Daschle was not the only Democrat to chime in with "I told you so" choruses Friday. "Congratulations to President Bush," said Democratic National Committee chairman Terry McAuliffe. "After numerous unsuccessful attempts, he finally figured out how to make the market go up. He fired his economic team." (Stock prices began to tumble on Wall Street after new figures were released showing unemployment at an eight-year high. The skid reversed after the "resignations" of Lindsey and O'Neill were announced, and stock prices closed slightly higher Friday.)

Al Gore spokesman Jano Cabrera added: "Al Gore's been saying for quite some time that the economic team should be scrapped. I think that most Americans realize that this economic team was let go because they did not come out with a viable economic plan. All the economic figures under the Bush administration have been dismal."

But indications from the White House are that the firings, particularly O'Neill's, may be anything but a scaling back of the Bush tax-cut plan. Conservatives hailed the removal of O'Neill, viewed by supply-siders as a tax-cut skeptic. Since the midterm elections, Bush has continued his call to make permanent the tax cuts passed by Congress, essentially revising the provisions of his own tax-cut plan, inserted by O'Neill, that called for a slow rollout of the tax cuts.

Given the administration's continued push for accelerating the tax cut, and its looking to a new series of tax cuts for next year, O'Neill's dismissal seems to have more to do with the criticisms of tax-cut advocates than the Democrats.

Bush has made clear that his top economic priority is to accelerate last year's tax cut. The administration also reportedly wants to push for lower taxes on stock dividends, a plan that also engendered skepticism from O'Neill, and to allow larger contributions to 401K plans and personal retirement accounts.

But advocating tax-cut delays was just one strike against O'Neill. As one of the few non-devout supply-side voices on Bush's economic team, he also had a history of rhetorical stumbles in his time at Treasury. He called the collapse of Enron an example of the "genius of capitalism," he predicted that stocks would soar after the Sept. 11 attacks, and he turned heads in Washington when he estimated the war could carry a price tag as high as $200 billion, more than double the estimate from the House Budget Committee.

"He was an ineffective spokesman for the administration's policies," says Reynolds. "And when he had ideas, they didn't seem to be very good."

Lindsey, for his part, raised eyebrows in September when he claimed a war in Iraq could allow the U.S. to control Iraqi oil and drive the price of oil down. "When there is a regime change in Iraq, you could add 3 million to 5 million barrels [per day] of production to world supply," he said. "The successful prosecution of the war would be good for the economy."

Whether or not that is true -- especially if you believe O'Neill's $200 billion price tag -- risking American lives to drive oil prices down was probably not among the White House's talking points.

Speculation swirled Friday about who might replace Lindsey and O'Neill. Some, like Reynolds, advocate eliminating Lindsey's position altogether. "That job was basically made for Robert Rubin," Reynolds says of one of Lindsey's predecessors (who later became secretary of the treasury). "The president has plenty of economic advisors already. The problem was, they had too many people they wanted to give jobs to and not enough spots to put them in." Nonetheless, Stephen Friedman, a former chairman of Goldman Sachs, is among those rumored to be up for the post.

There has been much speculation about who might replace O'Neill. Among the names mentioned have been Hubbard and Charles Schwab. Also floated as a contender is retiring senator Phil Gramm, a Texas Republican and former chairman of the Senate Banking Committee, who just this week got Novak's endorsement for the job. Then again, a plug from Novak might just be the kiss of death.