Four days later, Lott's controversial comment gets some attention. But not from top congressional Democrats. 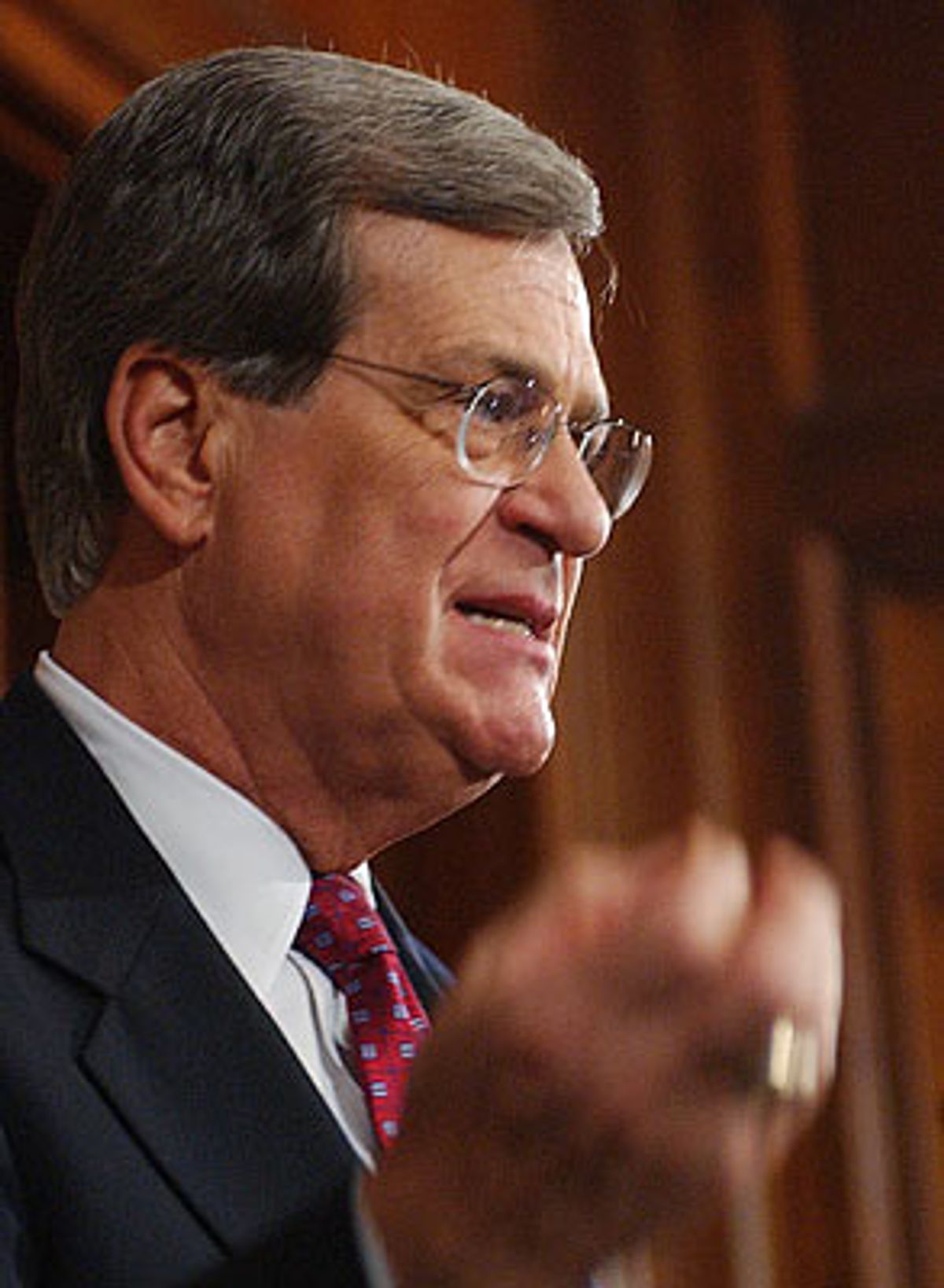 Senate Majority Leader Trent Lott's big mistake came last Thursday, at a ceremony commemorating the 100th birthday of Sen. Strom Thurmond, R-S.C. When it was his turn to speak, Lott boasted that his home state of Mississippi had supported Thurmond's run for president in 1948, and that "if the rest of the country had followed our lead we wouldn't have had all these problems over all these years."

Thurmond ran in 1948 as an openly pro-segregationist Dixiecrat. Lott's comment, according to the Washington Post, was met by "an audible gasp and general silence."

But perhaps even more surprising is how that stunned silence extended all the way to the Democratic Party. By Monday, many black leaders and black organizations had denounced Lott's remarks. On Monday, Lott said only that his comments "were not an endorsement of [Thurmond's] positions of more than 50 years ago, but of a man and his life." And four days later, few leading Democrats -- including those considering a bid for the 2004 race -- were willing to openly criticize the senator.

Even Democrats who condemned Lott's statements Monday did not mention his former affiliation with the Council of Conservative Citizens. The CCC was the successor to the segregationist White Citizens' Councils of the 1960s. In a 1992 speech, Lott told a group of CCC members, "The people in this room stand for the right principles and the right philosophy." When Lott was criticized in 1998 for his involvement, he said he had "no firsthand knowledge" of CCC's racial views.

Sen. Tom Daschle, D-S.D., who will hand the Majority Leader's position back to Lott at the beginning of the new Senate term in January, said Monday that he had spoken to Lott about the comments and was confident that Lott did not mean to endorse the Dixiecrat policies of Thurmond's presidential run. "There are a lot of times when he and I go to the mike and would like to say things we meant to say differently, and I'm sure this is one of those cases for him as well," Daschle said.

When asked if Sen. John Edwards, D-N.C., had any reaction to Lott's comments, Edwards' spokesman Mike Briggs said only: "We've been mulling it over." Later in the afternoon, the Edwards team finally settled on a statement that called Lott's comments "wrong" but seemed crafted with an eye toward the all-important 2004 South Carolina primary: "Obviously we are better off because we did not elect a segregationist in 1948," Edwards said. "To his credit, Strom Thurmond has changed over the years. Sen. Lott's comments were wrong."

A spokesman for Sen. Joe Lieberman, D-Conn., said the former vice presidential nominee had not commented on Lott's remarks, but that he might do so soon. Calls seeking comment from other Democratic leaders -- including Sen. John Kerry, D-Mass., and House Minority Leader Nancy Pelosi, D-Calif. -- were unreturned Monday. None, at this writing, had publicly condemned Lott's remarks.

On the pundit-dominated news shows, as elsewhere, Lott's comments were downplayed. On "Meet the Press" Sunday, Robert Novak said the media attention to the story "is the kind of thing that makes people infuriated with the media."

"He thought it was a social occasion," Novak said of Lott. "He's thinking what comes to his mind. He's saying -- if you listen to the whole speech, he's making extravagant statements about Strom Thurmond, as he should on his 100th birthday." Novak blamed the press of picking "up something that's said at a birthday party and turn it into a case of whether he should be impeached."

And the Washington Post's David Broder (as first pointed out by blogger and Salon contributor Joshua Marshall here) seemed to avoid making too much of the embarrassing gaffe. "As long as [a] racial divide continues, any kind of comment like this on Senator Lott's part is going to ... have all kinds of bad resonance," Broder said on the program.

On Monday, however, Al Gore spoke up. In an interview with CNN's Judy Woodruff Monday, Gore said, "It is not a small thing, Judy, for one of the half dozen most prominent political leaders in America to say that our problems are caused by integration and that we should have had a segregationist candidate. That is divisive and it is divisive along racial lines. That's the definition of a racist comment."

"Crossfire" host Paul Begala said Monday that the relative lack of attention paid to Lott's comments "does point out a very interesting difference between the left and the right. But more than the parties, it points to the differences between the right-wing and left-wing media." Had this been a Democratic mistake, it would have been blasted on Fox News and picked up elsewhere, he claims.

Begala says that the chorus of media voices can have a very real political impact, as he claims it did in the Minnesota Senate race after the death of Democratic Sen. Paul Wellstone. "That echo chamber swung the election away from [Democratic candidate Walter] Mondale to [Republican Norm] Coleman," Begala says. "It was not just the conduct at the memorial service" -- which became an openly partisan affair -- "but the incredible orchestrated political conduct afterwards that helped turn that race."

Begala also believes that part of the lack of outrage is a matter of logistics. "The Congress is not here. If Congress was in session, I think you'd hear a greater outcry, and I expect to hear it when they come back," he says.

But if Daschle and Edwards' comments -- and the silence of most other Democrats -- are any indication, it seems likely that if this story has any longevity, it won't be because of Democratic fire-breathing.