Despite Jack Nicholson's competence, this comedy about a Midwestern retiree never goes beyond mocking its characters and flattering its audience. 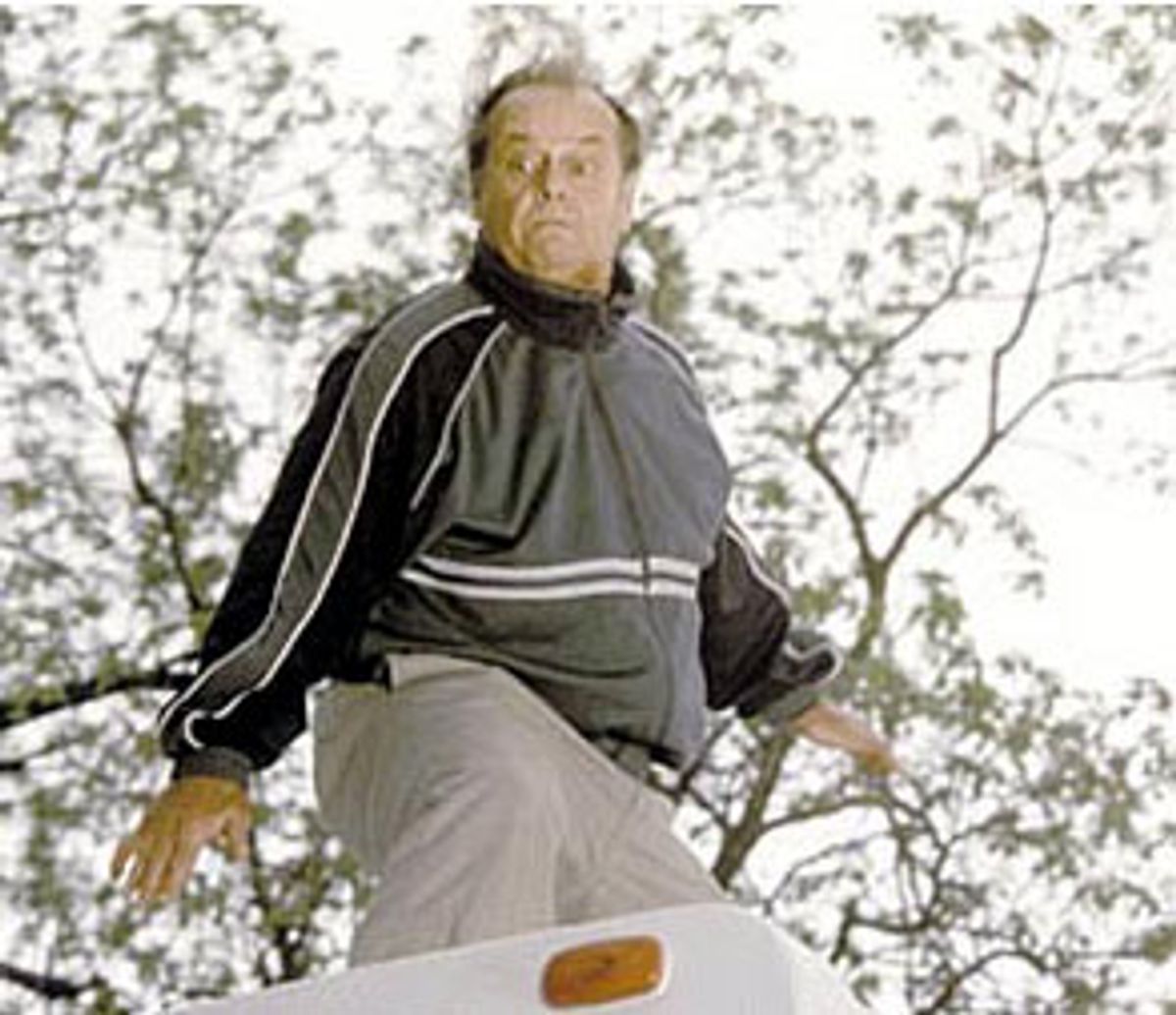 For all the combinations of tone and style that movies have indulged in, I can't think of one that has attempted smug poignancy (or is it poignant smugness?). That's the tone of "About Schmidt," adapted by director Alexander Payne and Jim Taylor from Louis Begley's novel. Schmidt, played by Jack Nicholson, is a 66-year-old insurance executive who, after his retirement, finds he has nothing in his life, no identity outside his work, nothing in common with Helen (June Squibb), his wife of 42 years.

When Helen suddenly dies, Schmidt takes off in his new Winnebago, revisiting places from his past and going to others he's always wanted to see. His final destination is Denver, where his daughter Jeannie (Hope Davis) is to be married to Randall (Dermot Mulroney), a mullet-wearing waterbed dealer who combines the New Age dippiness of his aging hippie mother (Kathy Bates) with the sleazy cravenness of a born snake-oil salesman. (Helen is barely in the ground before Randall tries to get Schmidt to go in on a pyramid scheme.)

The most promising thing in Payne's first movie, "Citizen Ruth," was a first-time director's willingness to take potshots at both sides of the abortion controversy. Payne seemed to understand that a satirist shouldn't be anybody's friend. That willingness didn't look so good in his next picture, the widely praised "Election." I laughed a lot at "Election," but I hated myself for it afterward. Payne's satirical gibes had become too easy, too pleased with themselves. The movie invited the audience to flatter itself (as "Citizen Ruth" didn't) when it laughed at the poor, pathetic schmucks it put on-screen. There was never a moment when we were implicated in the laughter.

Like far too much contemporary American movie comedy, "About Schmidt" is all about flattering the audience. A drab visual insult, James Glennon's cinematography is about reducing the Midwest to strip malls and ugly downtowns, overbright superstores and anonymous tracts of suburbs. Here, we are being told, is the land of dullness and convention and routine, where everything has a deadening sameness. Even before you see them, you anticipate the twin La-Z-Boy loungers in the TV room, the floral-pattern bedroom wallpaper, the Sears family portrait on a young executive's desk, the heavy mahogany paneling in the town's "classy" restaurant. That Schmidt, for all his reluctance to question things and all his surface complacency, starts to sense that deadness makes him largely exempt from Payne's target practice.

Schmidt is meant to be the movie's Everyman -- or something like that, and his road trip is the movie's voyage of discovery. Early on in the movie, Schmidt watches a TV ad soliciting people to sponsor poor children in Third World countries. He sends a check and winds up sponsoring a little African boy named Ndugu. Payne uses Schmidt's letters to Ndugu, read by Nicholson in voiceover, as the character's inner monologues. They are full of Schmidt's disappointments and repressed anger, as well as his complaints about Helen, the type of woman who scolds, "Don't dilly-dally," when he goes out to run an errand. The inappropriateness of writing these letters to a distant 6-year-old boy who can't even read is the movie's running gag. Up to a point.

Payne is, of course, making fun of the way child-relief organizations use advertising to guilt-trip people into making contributions. But he ends up using Ndugu in much the same way, as a little symbol of unexpected brotherhood for the audience to grow misty over. Payne only wants us to laugh at some of the clichés here. Other people's sentimentality and bad taste are there for the audience's snarky laughter. He is much more indulgent toward his own sentimentality. It's OK to laugh when some church vocalist sings Dan Fogelberg at Jeannie and Randall's wedding, or when a campground tourist (Harry Groener) gets all moony over a new top-of-the-line Winnebago. But when Schmidt watches a falling star he believes is a sign from Helen, or when he breaks into tears from a crayon drawing that little Ndugu sends him of a man and boy holding hands, well, we're supposed to fill up, too.

Part of what may make that acceptable to some viewers and critics is that it's coming from Jack Nicholson, whose off-screen persona is still unimpeachably hip (they wouldn't buy it from, say, Kevin Costner). Payne is well aware of the novelty of seeing Nicholson play an average, unimaginative Midwesterner. To his credit, Nicholson stays in character throughout the movie. There's just one flash of his famous smile and one fleeting use of those quotation-mark eyebrows of his. He doesn't aggrandize Schmidt, or ridicule him. He understands the man's trouble with expressing emotion, his acceptance of convention, his resistance to questioning the way things are. It's a respectable performance.

And I didn't believe a second of it. It's not that Nicholson can't play an ordinary man. He turned in one of his greatest (and least seen) performances as just that in Tony Richardson's underrated muckraking drama "The Border." But he's getting praise here for much the same reason that William Hurt got praise for playing a homosexual in "Kiss of the Spider Woman": The audience knows it isn't true. Nicholson does a good impersonation of a middle-aged Midwesterner. What he doesn't do is get under the skin of the character. We accept Schmidt because it's Killer Jack in the role. We know he doesn't really have to go to bed with this old woman (one critic I know assumed at first that Helen was meant to be Schmidt's mother) or putter around in his pressed Dockers.

Nicholson's performance is so obviously a piece of acting that we can keep Schmidt at a comfortable distance, which is something you can't say about Len Cariou in the small role of Schmidt's best friend, Ray. Cariou's Ray is a guy you believe you might run into a hardware store or behind the desk in an insurance office. There are fine streaks of bitterness and tenderness in the performance that make you believe this man has actually led this life. Nicholson, essentially, has reaped the benefits that actors often do when they wipe out everything that made them fun to watch in the first place. Nobody really needs to see Nicholson resorting to his trademark mugging. But when you go to see a Jack Nicholson performance, you don't want to feel you're watching Lloyd Nolan, either.

If scenes like the one where Schmidt receives Ndugu's drawing were to appear in a Lifetime original movie, critics would probably gag. But "About Schmidt" has been winning wide praise since it debuted on the festival circuit this past fall. How can critics fall for this movie's rank sentimentality? How can they fail to notice its hypocrisy? Payne is a singularly ungenerous filmmaker. You can't make a movie about a character who's reaching out for some human connection when at the same time you're ridiculing nearly everyone on-screen. How can you take Payne's treatment of Helen's death seriously when, just a few minutes earlier, he's included close-ups of her wrinkles and her armpit while Schmidt talks about how repulsed he is by her flesh and her smell?

Except for Schmidt, nearly everyone in the movie is a simp or a fool. Schmidt frets about Jeannie marrying a dolt like Randall, but from what we can see they deserve each other. Hope Davis has been photographed to look pinched and mousy (you expect her nose to start running in every scene) and directed to be whining and self-righteous. And what exactly does Payne think he's doing by having Kathy Bates strip down on camera? An actress shouldn't have to have a model's body to appear naked on film. The German actress Marianne Sägebrecht looked wonderfully sexy in the nude in Percy Adlon's 1985 comedy "Sugarbaby," and in the upcoming "Chicago," Queen Latifah, spilling out of a sequined gown, is just about the most voluptuously inviting sight you've ever laid eyes on. But Payne is no sensualist. He uses Bates' flesh to get a laugh of revulsion from the audience when he should be getting us to appreciate her audacity.

That's what separates Payne's style of filmmaking from the American comedies that have always delighted in eccentrics and kooks and small-town oddballs. Filmmakers like Preston Sturges or the Frank Capra who made "It Happened One Night," Gregory La Cava and Mitchell Leisen and (despite his cynicism) Billy Wilder, loved the nuttiness of their characters. They weren't out to score points with the bad taste of the people they put on-screen. Had Payne the grace or generosity to present the vulgarity and naiveté and tackiness of these characters as something vital and endearing and delightful, the movie might have been explosively funny.

But I'm afraid Payne, along with the twee, tea-cozy sensibility of Wes Anderson and the team of Spike Jonze and Charlie Kaufman, with their meta-nothings, represents the new school of American film comedy that presents itself as an exclusive club for those hip enough to get the joke. What unites these filmmakers is that their vision of comedy is crabbed and diminished and also, at the same time, terribly, terribly pleased with itself.

Payne's specialty, only three movies into his career, has become making the audience feel superior to his characters. How can critics laud "About Schmidt" with phrases like "profoundly moving" without noticing that the sense of humanity they claim the movie celebrates doesn't extend to 95 percent of the people on-screen?