We gambled and lost everything we didn't need

After nearly two years on the road, we arrive a different family -- splintered but revived. 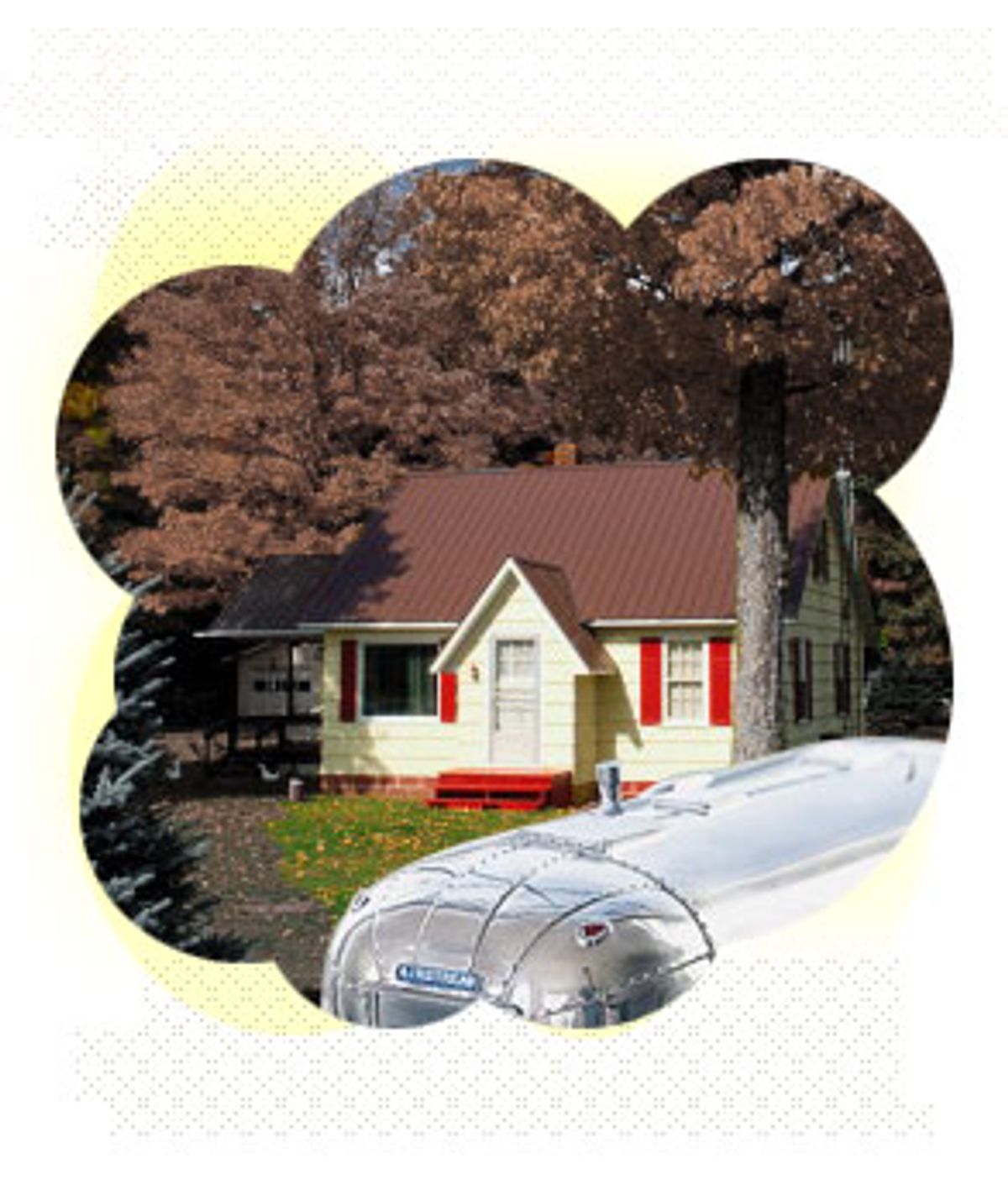 We hitch the truck to the trailer as we have done a hundred times before. The deep-throated growl of our Ford diesel is familiar and comforting, like toast and oatmeal. We scramble into our accustomed seats: Mom and Pop in front, kids and dog in back.

But today we aren't following some whimsical line on a map. We won't crawl up a mountain pass or wind along a coastal road. We won't inch across an ocean of sand and mesquite. Today we aren't hiking to an alpine meadow as radiantly green as newborn creation. We won't lie under the eternal Texas sky while the Leonid meteors shower above us.

Today I won't barter at a bustling Mexican market in my fractured Spanish or join an exuberant circle of Cajun dancers with my clumsy two-step. Today we are only traveling 30 miles, and it will be our last trip together. Thirty more miles, and everything will change.

The truck rumbles expectantly. The dog pants with excitement. We look at each other, grinning. "Let's keep going," we all say, like kids skipping school.

But we can't. For the first time in almost two years, obligation lies ahead -- mortgages and taxes and utility bills. We have houses and keys to open them with. We have lawns to mow and windows to wash. We are not sure we want any of it.

Spring arrived late in Michigan, but I had insisted on arriving punctually. My early-bird strategy was to be first in line to choose among houses newly sprouted for the springtime market. What we got instead was freezing weather and winter's leftovers. So we rooted and snuffled among the "handyman specials" -- houses with walls that rippled like potato chips; houses with dreadlocks of exposed wires and rusty pipes; houses with crawl spaces through which small rivers flowed. Within six weeks, however, my husband and I had each found a house, and we prepared to start our separate lives.

I could not have foreseen this ending to our adventures, not exactly. When we left I only knew that without some change, some sign, some new direction, I would not return to the marriage in which we had struggled so relentlessly for the past baker's dozen years. Once, long before, in one of our endless counseling sessions, the therapist had asked, "What do you want for your marriage?" While my husband talked of travel and grandchildren, I suddenly knew with utter clarity that the only thing I wanted was to live in peace. Only peace. At the time I might as well have asked for the crown jewels.

But after months on the road, cradled in God's own earth, with time stretching ahead as broad as Nevada, I felt tender green shoots sprout tentatively from a dry stump. They felt a lot like peace. I knew that, much as I cared for the man, peace would not be found in the marriage. The odd and miraculous thing was that the trip not only made that clear, but also made it possible for us to part with some level of decency and even, sometimes, with compassion. To break a vow and end a marriage is a failure and a sorrow. I felt it was the right decision then, and I still do.

Now, six months after those last 30 miles, I live in a town with a Main Street two blocks long. It has three variety stores, a two-seat barbershop, and a hometown grocery that has survived the Wal-Mart kiss of death. Real church bells toll three times a day, and an army of kids tumbles onto the streets for Halloween.

This town is vintage America. I know because I have seen her sisters in Choteau, Mont., and Castroville, Texas, in Bardstown, Tenn., and Pioche, Nev. These are towns with cracked sidewalks, meandering property lines and houses that are known by the name of the family who used to live there. Mine is Grandma Urka's house. My husband lives around the corner, and our kids go easily back and forth.

While we traveled, Julia and Stephen had hungered for the company of their own kind, and they have nestled comfortably back into routine. We aren't allowed to shop at Goodwill anymore -- "It makes me feel like we're poor," says Julia, "and I can't find anything fashionable there." She now wears jeans that drag on the ground with elaborate laces up the sides that we bought at Old Navy. She wants to try out for cheerleading, and she is, like, ohmygod, whatever. We both know it is a game, and we chuckle about it when she sits on my bed at night and the events of the day bubble up through her chatter. We both agree that we like indoor plumbing and central heat -- amenities hard to find in Forest Service campgrounds.

Stephen, on the other hand, has returned with greater confidence and a deeper sense of purpose. He plans to join the Navy and work on airplanes. He is more aware (and sometimes less tolerant) of the narrow horizons of his peers. His teachers say he seems mature and experienced for his age.

"You know, Mom," he said to me recently, "I think I'd be in a lot of trouble now if we hadn't gone away." I think he's right, and when the dogs of inadequacy nip at my parental heels, I know that this time, for once, we got it right.

We got it so exquisitely right. There was no dark side to this adventure. No caveats. No regrets. Despite intermittent hardship; despite being robbed in Mexico and escorted by the police from a city park in Muncie, Ind.; despite almost driving off a mountain; despite an abundance of hormones and miscellaneous inner demons, we experienced a marvelous, life-changing journey together.

I wanted to be changed. I didn't want the trip to be simply an 18-month holding pattern after which I'd pick up all the balls I'd dropped. I didn't want to be sucked back into the riptide of rush and hustle, into the jaw-clenching, teeth-grinding, disease-inducing adjectives of the culture I left for a time. I didn't want to accumulate possessions or meaningless obligations again.

So far I haven't. Part of me simply has not come back from the road, and I hope it never does. I may have lost muscle tone, but I have kept my peace.

I've also lost other, unexpected things: my coffee habit, my nail-biting habit, and the headaches that used to screw my head to the pillow. And I've lost a lot of fear. After rambling thousands of miles, I've found that people generally (not always) mean well; that things generally work out; and that when they don't, I am generally competent enough to deal with it.

I've absorbed some of the world's astounding variety and beauty, and I think it's a pretty fine home for humans to share with other creatures. In fact, I think that awe is a far more rational reaction to this world than fear.

When one fear topples, a domino effect is set in motion. Now I worry less about money, about finding work, about my car breaking down (it already has). Fear is contagious, but so are confidence and trust, and they are better companions for the road.

Because I'm less fearful, I'm also less angry. I don't get mad at telemarketers or rude drivers or long waits in slow lines. I don't need to watch my back, and I don't assume that mechanics or insurance companies or the guy who just sold me a broken dryer is out to screw me. (Well, maybe he was, but I made him fix the dryer.) I haven't become a patsy; I've just decided that peace is an absurd price to pay for indulging in anger and fear. And that eliminates a huge reservoir of bad energy -- the kind that makes you sick.

In a way I'm still journeying, still without a plan, exactly, or an itinerary or a destination. I'm taking my time; I'm trying to listen to whispers that were once washed away in life's floodwater. Listening, I find, is a discipline that requires silence, faith, time and lack of clutter -- all the elements of a good road trip. And I know how good the road can be.

The autumn harvest is almost over in Michigan. Trucks drive by my house loaded with crates of blushing apples, orange carrots, sunny corn, sugar beets and onions. The two-lane I live on is a crease in the palm of Michigan's mitten, stretching from the bean fields in the east to the pristine dunes of Lake Michigan just eight miles to my west. I go there frequently to walk by our blue, freshwater sea and absorb the rhythm of the waves. I go there to look across the water and remember.

I have never been so free and fearless. I will travel again, and I hope it will be soon.