Of course Spike Lee has the right to transcend movies about race. He also has the talent to do better than this plodding moral fable about a prison-bound Edward Norton. 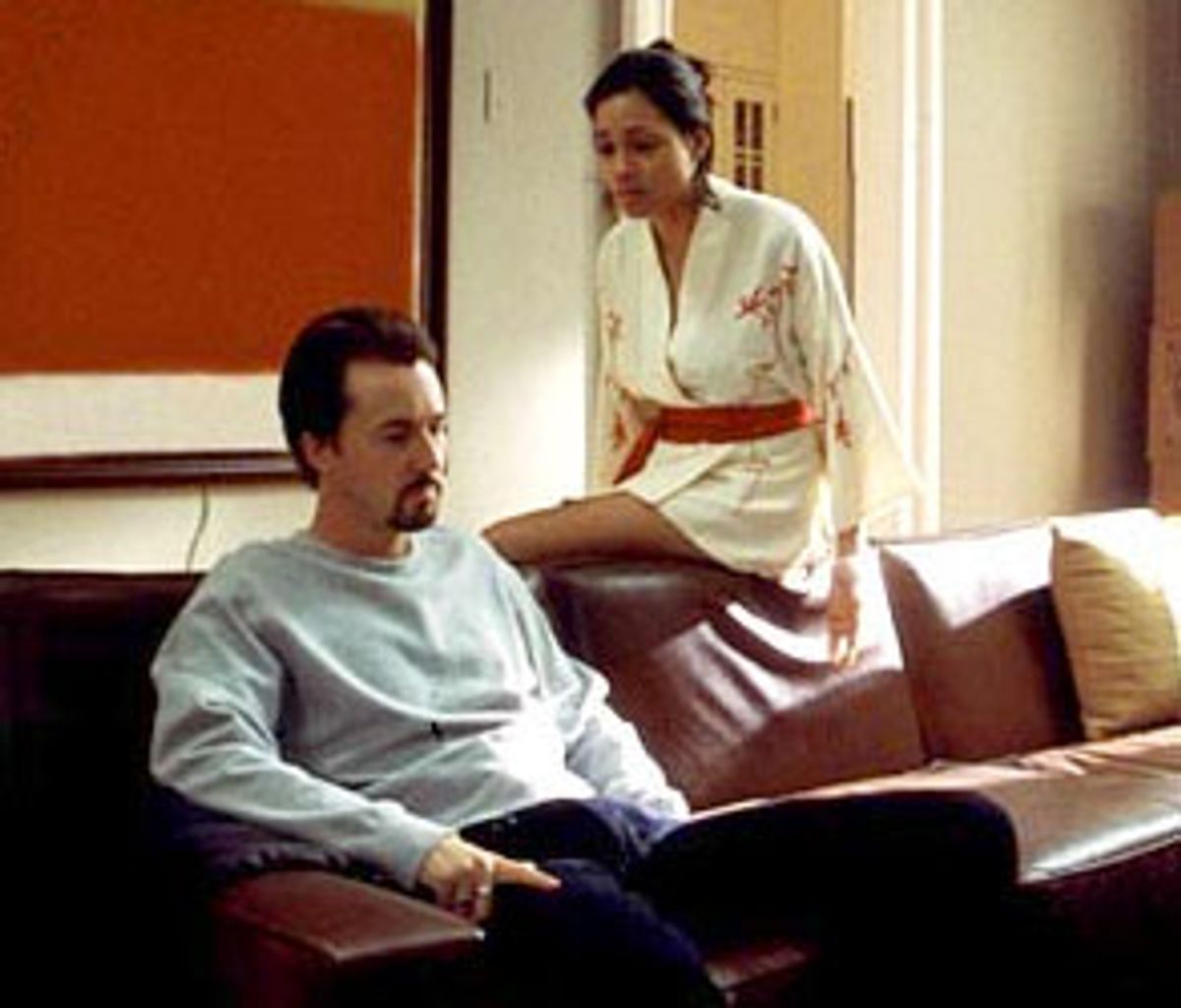 Monty Brogan is going to jail. Someone ratted him out for selling drugs and now he's looking at seven years. Spike Lee's "25th Hour" is about Monty's last day in New York before going to prison.

The story is plodding and spare, and the movie seems to take forever to unfold, but the forward motion, such as it is, comes from three pieces of unfinished business: Monty has to figure out if his girlfriend is a rat, say goodbye to his dad and his childhood buddies, and decide whether he's going to skip out on his sentence.

Goddamned Spike Lee. The guy is probably one of the 10 most talented filmmakers of his generation -- for his energy, his ambition and that climatic scene in "Do the Right Thing" alone -- and this is what he does with it? A clumsy, oh-well story about the moral quandary of a drug-dealing recidivist who more or less deserves to go to jail? There are pieces of "25th Hour" that are exhilarating -- a scene in which Monty busts on every ethnic group in New York; a club scene where Philip Seymour Hoffman finds the guts to take Anna Paquin up on a dare -- but they only suggest how much life is missing from the rest of the movie.

It's hard not to read "25th Hour" as a reaction to Lee's last film, "Bamboozled," a passionate, fevered story about black stereotypes in popular media -- not exactly the kind of subject addressed with any kind of gravity by anyone else making movies. I thought it was one of Lee's best; you could tell he had been burning to make it for years. The movie, however, tanked commercially and earned mixed reviews.

Now there's "25th Hour," a drama based on David Benioff's novel, starring coffee-and-cream Rosario Dawson, forcing herself to just act natural, and a white-bread cast of Edward Norton, Hoffman, Paquin and Brian Cox. Social politics? A dis on the Rockefeller drug laws and a slam on Dawson's New York-born character for getting a Puerto Rican flag tattoo after a vacation to our island commonwealth. I wouldn't dare challenge Lee on race, and he has and should make more stories that transcend the subject, but the timing of this one is unfortunate.

Before the credits roll, Monty rescues a beaten and abandoned dog. Message: He's an unsavory guy, but he has a heart. Cut to sweeping shots of Tribute in Light, the temporary Twin Towers memorial, seen from uptown and across the rivers, co-starring with the Statue of Liberty and the Brooklyn Bridge. (The whole movie takes place in New York after Sept. 11, 2001; more on this later.) As the movie gets rolling, Monty starts off on his final day of freedom with his well-behaved dog, Doyle.

Monty's plan is to have dinner with his dad, a former firefighter and barkeep at an Irish tavern, meet his friends for drinks, stop by a club and work out something with a Russian mobster. He's somewhat suspicious of his girlfriend, Naturelle (Dawson), but it's hard to believe he really thinks she ratted him out. (For her part, Dawson never gives us reason to suspect her.) If, as viewers, we're not buying this conundrum, we're left with the question of what Monty's going to do about prison. His schoolboy friend Francis (Barry Pepper) thinks he might kill himself. His father thinks he should fly the coop.

But a weird problem with the film is that no one seems to conceptualize prison as anything but an ass-fucking factory. The ultimate loss of freedom? Nah. A grueling, often inhumane tank built expressly to contain, humiliate and sap the dignity of the average felon? Nope, no mention made of it. But everyone, especially Monty, seems to be worried about the attention his boyish good looks will attract from the soap droppers. The film might have worked better -- particularly with its excellent 15-minute "Last Temptation of Christ" ending -- if it asked more directly what it means to be free, if it gave us a better sense of what Monty had risked and what he was giving up to go to prison. There's a suggestion, in the payoff to Monty's scathing rant about the city's ethnic groups, but it's not enough.

There is one significant side story: Hoffman, playing Monty's other childhood friend, has a crush on one of his students, played by Paquin. It's amusing, and then striking, to watch this part of the film play out, but it's hard to see why it belongs here, other than to show that he -- like Francis, the singularly greedy Wall Street guy -- is just as immoral as Monty. A tougher editor would have sliced a lot of the character development and just left it up to Pepper and the supremely capable Hoffman. (And sweaty-faced Paquin does a great job playing Erica Christensen in "Traffic" too.)

The film is set in New York City not long after Sept. 11, 2001. Inasmuch as it illustrates in a very real way what the city looked like six or so months ago -- the breathtaking Tribute in Light, shrines to firefighters in bars, a giant hole in the ground -- it's as honest as hell and teeming with loss. Part of me wants to believe that this was nothing more than a setting for Lee: His movie takes place in New York, and this is what New York looks like now.

But in the pregnant language of film, I worry that it's supposed to mean something else. Lee is a pro, and he knows how to work with reference, allusion and metaphor: There's a "Cool Hand Luke" poster in Monty's apartment because he's going to jail, and his character is named after Montgomery Clift in "A Place in the Sun" because he's a working-class guy who aspires to the luxury and comforts of money. So I'm worried that we're supposed to somehow equate the destruction of the city with the destruction in Monty's life, or identify him with barrenness and loss. (It's hard to even write that last sentence; it's so preposterous an idea to confuse the deaths of 3,000 people with a drug dealer's jail term.)

The thing is, I liked this stuff. It felt real to me: New Yorkers are reminded of the attacks every single day, whether by a tribute mural, an American flag on a taxi cab, or an unbelievably crappy oversize bronze sculpture of a firefighter on his knees. "Spider-Man" and all the other pictures that edited out the towers or digitally removed them were wrong -- or at least dishonest -- to do so. Except for the cultural-sensitivity cops who fret that sadness might get in the way of selling a story, everyone instinctively realizes how absurd that was. ("OK, this Christmas let's pretend Grandpa didn't die!") Lee had the guts to get on with it. I just wish he had been a little more graceful in his execution.