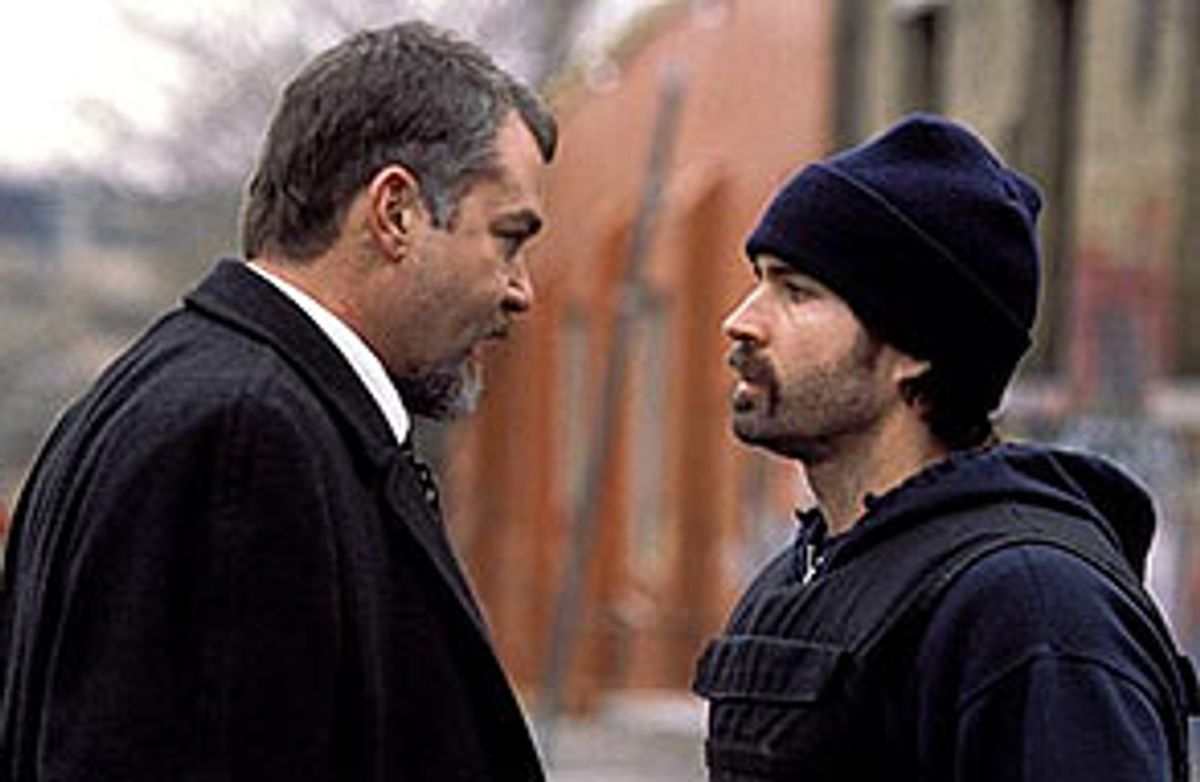 About the best thing you could say about "Narc" is that it's a rock-solid little genre picture. Whether you like it or not is basically a matter of taste. You like stories about tough-guy renegade cops or you don't. You like blue-tinted grainy pictures that look like they were shot in the '70s or you don't. You like movies where guys in sharp goatees use reasonably convincing cop lingo like "nickel-bagger" and "stop-and-pop" or you don't, you pussy.

It's a tough place, this Detroit, riddled with murderous thugs and crackheads with inflamed STDs. Nick Tellis (a shaggy Jason Patric) is one of the good guys. He's been suspended from his undercover narcotics job for shooting a psychotic druggie and accidentally hitting a pregnant woman. The force, however, now needs his undercover contacts to help sort out an investigation. A fellow undercover has been beaten and shot dead, and the police have run out of leads.

Tellis doesn't want back in, and his shivering wife (Krista Bridges) doesn't want him to go -- she'd rather have him at home with their beautiful baby. But as Tellis says, the welfare and the pension aren't cutting it. He makes a deal: He'll look at some files, just this once, if the captain will promise him a desk job.

Is there some sort of plot calculator for movies like this? Yep, and the next entry in the character column is the loose-cannon detective who "makes solid collars that make solid cases." That would be hulking Henry Oak, the dead cop's partner, played by Ray Liotta. And the boilerplate tough-guy talk? "The only thing you need to know is that I'm going to bag the motherfuckers who killed Mike."

OK, let me back off a second to note that "Narc" really isn't as bad as the howlers in my notes make it out to be. The direction of Joe Carnahan, who also wrote the script, is stylish without being overbearing, the actors look comfortable in their roles and the modest twists unfold at a pace that doesn't seem ridiculous. The film would probably make a good episode of "Homicide: Life on the Streets."

The conflict in stories like these is always regulated morality versus rule-bending pragmatism. Or as Oak says of the case, "This has everything to do with right and wrong, and nothing to do with rules and regulations." We're certainly given a lot of reasons to side with Oak and Tellis, who are willing to let a crackhead have one more toke if it means they'll get a source. On the other hand, "those assholes upstairs" play politics, and the board members questioning Tellis can't possibly understand what it means to chase down a guy who has just stuck a needle in a cop's neck. The dramatic arc of the story is finding out, along with Tellis, just how far Oak has gone off on his own vigilante trip -- and how far Tellis went on his own.

A lot of the movie follows Oak and Tellis around the Motor City -- a Motor City that looks a lot like Toronto at times -- from chips-and-coffee stakeout to rotting-corpse crime scene (a bleakly hilarious karmic suicide worthy of a Darwin Award). Breaking up the police procedural are a few scenes that might as well be broken out and titled "character development": We hear Oak talking about his dead wife and see Tellis arguing with his live one.

You can see Tellis change as the film moves toward its bloody, essentially unsurprising conclusion, but I never figured out why, exactly, he makes that transformation. "You're fucking with something you can't possibly understand," says Oak. "You're running at this for all the wrong reasons," says Tellis' wife. The way I read the film, though, is that Tellis most likely understands exactly what he's fucking around with, but we never know why he's running at all.