Bill Frist, the likely new Senate majority leader, is hailed as a moderate, but he's an antiabortion hard-liner who votes much like Trent Lott. 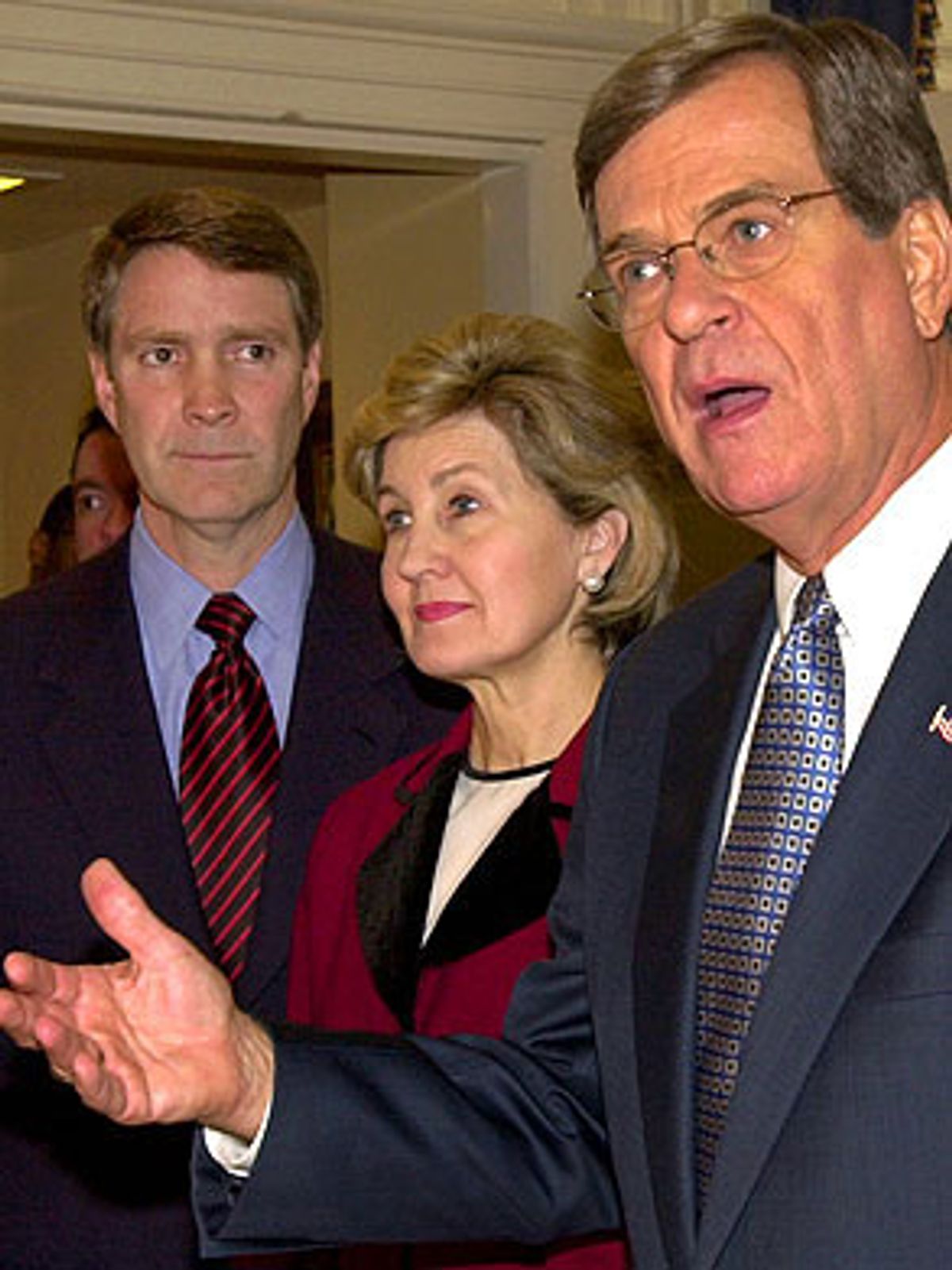 Bill Frist, the affable heart surgeon-turned-senator from Tennessee, is likely to be the next Senate majority leader, thus rescuing the Republican Party from racial guilt-by-association with Trent Lott, who never recovered from his remarks praising Sen. Strom Thurmond's 1948 segregationist presidential campaign two weeks ago.

But Frist won't rescue America from Trent Lott's policies. After all, he supports them.

On Thursday, Frist became the first senator to openly challenge Lott, who stepped down Friday after a week of pressure from conservatives, other senators and, behind the scenes, the White House. Although there are others in the running for the top Senate job, Frist has locked up the support of key senators, including fellow Southerners Lamar Alexander of Tennessee and John Warner and George Allen of Virginia. At this point, he seems like a lock, and that's good news for President Bush, because Frist represents the face of the Republican Party that the White House wants to put forward.

On the surface, Frist, a 50-year-old first elected to the Senate in 1994, couldn't seem more different from the disgraced Lott. He's a chiseled graduate of Harvard Medical School; his Web site shows him patting the head of an adorable black baby on a humanitarian trip to Africa. The Senate liaison to the White House, he's known to be a strong ally of President Bush and, like Bush, he strives to project a new breed of inclusive Southern conservatism that eschews racist good ole boy bombast. As the head of the Republican Senate Reelection campaign, he worked closely with Bush political strategist Karl Rove in engineering the Republicans' midterm victory, further increasing his golden-boy status within the party.

His reputation as a moderate comes mainly from his work on healthcare -- he's been a positive force in pushing for a patients' bill of rights, and has teamed with Democratic Sens. Ted Kennedy and John Kerry to expand global AIDS prevention efforts. Beyond that, his demeanor sets him apart from Republican fire-breathers -- even ideological opponents call him easygoing and likable.

"I've met him several times," says Kate Michelman, president of the National Abortion Rights Action League. "He's a nice person. He doesn't come across as a zealot. The fact that he's a doctor gives him a mantle of credibility and moderation."

Yet when it comes to how he votes on social and civil-rights issues, Frist's genteel conservatism looks a lot like Lott's. Asked if he was any better than Lott on the issues, Michelman didn't hesitate. "The quick answer is absolutely not," she says.

"Few senators have a worse voting record on civil rights than Trent Lott -- but Bill Frist is one of them," the National Organization for Women's Kim Gandy said in a press release. "Frist has voted against sex education, international family planning, emergency contraception (the morning-after pill), affirmative action, hate crimes legislation and the Employment Non-Discrimination Act. This is the man who is supposed to save face for the GOP in the Senate? Think again."

Reached by phone, Gandy notes that while the Leadership Conference on Civil Rights, a coalition of civil-rights organizations, gave Lott at paltry 7 percent ranking for the last session, it gave Frist a 0.

People For the American Way, a liberal Washington advocacy group, compared Lott's and Frist's votes on 16 key issues, including affirmative action, abortion rights, gay rights and the confirmation of far-right judges. On each one, the two senators voted identically. Frist voted against the Employee Non-Discrimination Act of 1996, and against a 2000 law banning abortion clinic protestors from dodging their fines by declaring bankruptcy. Last year, the NAACP gave him a 15 percent ranking, just 3 points better than Lott's 12 percent. By contrast, moderate Republican Sens. Lincoln Chafee, R-R.I., and Arlen Specter, R-Pa., both got 48 percent.

"I do think his style appears different than Trent Lott's, but actions speak louder than words," says Ralph Neas, president of People for the American Way.

Frist's record on abortion is particularly conservative. He's voted against allowing overseas American soldiers to receive the same access to abortion as Americans at home, against family-planning programs and for a ban on late-term abortions. He's sometimes credited as a moderate for creating the stem-cell compromise Bush later adopted, which allows federally funded research on previously derived stem cell lines. But that policy put such strict conditions on the research that even the National Right to Life Committee endorsed it.

"Senator Frist's position on reproductive choice is virtually indistinguishable from Trent Lott's and, for that matter, from Newt Gingrich and Jesse Helms," says NARAL's Michelman. "He is strongly opposed to a woman's right to reproductive freedom and choice, and as majority leader he will, like Trent Lott, have a lot of power to affect the future of women's right to choose through the movement of legislation and working with the White House to move judicial nominees opposed to Roe v. Wade."

Still, some pro-choice Republicans are hoping that Frist's inclusive personality will extend into policymaking.

"We view this as an opportunity for us," says Jennifer Stockman, co-chairwoman of the Republican Pro-Choice Coalition. "We think he's a real pragmatist, that he understands that the party needs to get back on track of becoming Lincoln's party once again. We're hopeful we'll have a seat at the table to talk about everything from judgeships to legislation."

But Stockman understands this might be wishful thinking. Asked if Frist is really more moderate than Lott, she says, "I think the party would like that to be the perception. It's a perception the GOP will be anxious to cultivate."

In the end, though, a senator who merely seems moderate isn't help to those seeking to protect women's rights. As Michelman says, "You don't have to be a zealot to be a danger to women's freedom to choose."