Confederates in the attic

In the wake of the Lott debacle, President Bush faces questions about the way his campaign used the Confederate flag to win the South Carolina primary. 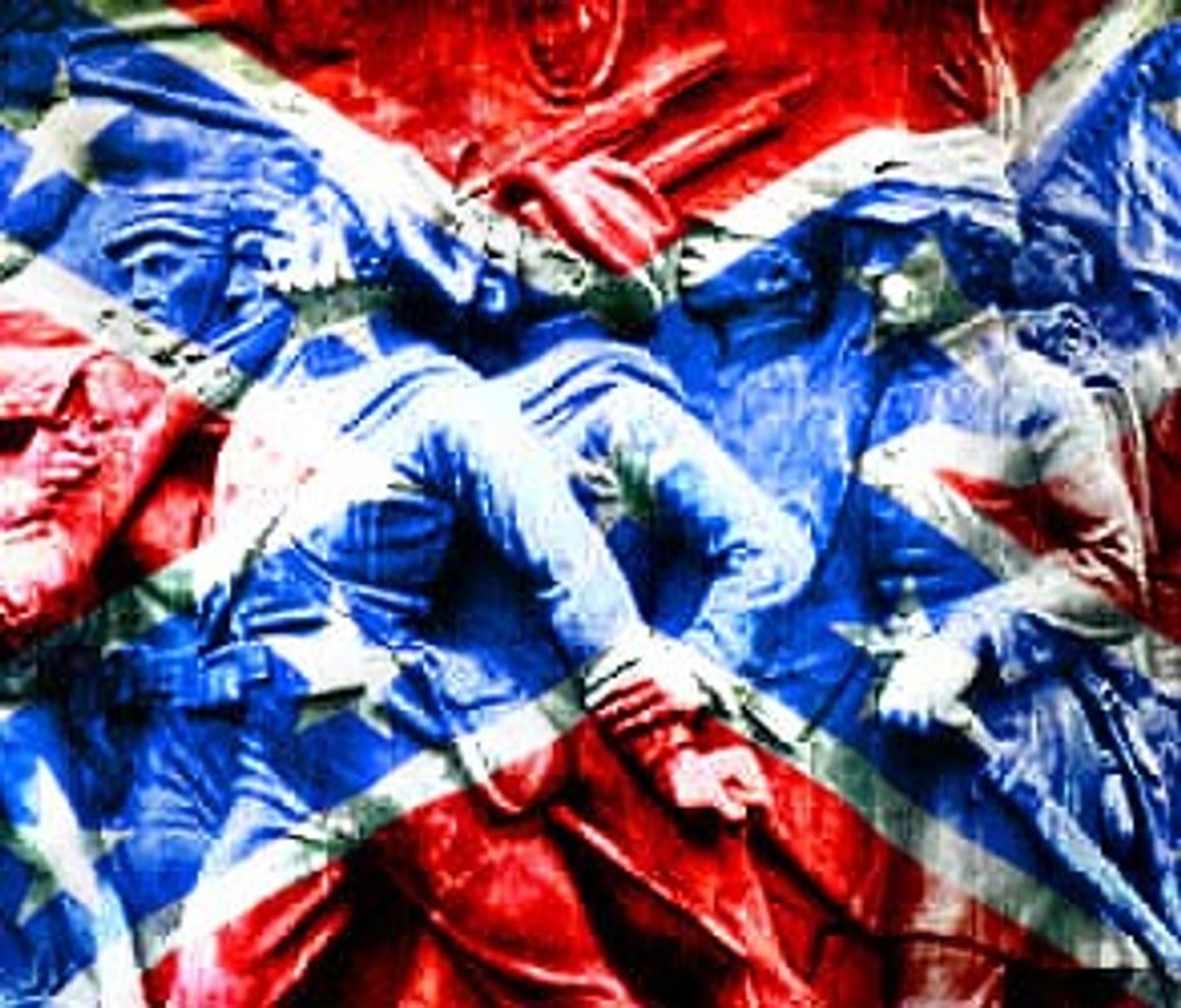 With Senate Majority Leader Trent Lott's hold on his job hanging by a thread, thanks to his praise for Strom Thurmond's segregationist 1948 presidential campaign, other Republicans, including President Bush, are drawing more scrutiny for their own ties to Southern segregationists and pro-Confederacy groups.

On Wednesday former President Bill Clinton accused GOP leaders of hypocrisy for calling on Lott to step aside and yet using race-baiting tactics to win elections in the South. Clinton pointed to this year's Georgia governor's race, when Republican Sonny Perdue used the promise of a referendum on the Confederate flag as a device to rally rural white conservatives. The incumbent, Democrat Roy Barnes, had pushed to change the state flag, which prominently featured the Confederate flag.

The flag also played a key role in Bush's victory in the Republican primaries of 2000, becoming a pivotal issue in the fight between Bush and Sen. John McCain, R-Ariz. In the wake of the Lott debacle, Bush's maneuvers during one nasty primary are raising new questions. Coming under scrutiny is Bush's connection to Richard Hines, the former managing editor of Southern Partisan magazine, former state legislator and current Beltway lobbyist who helped Bush defeat McCain in South Carolina.

Hines helped sink McCain's campaign with a last-minute mailer suggesting the Arizona Republican did not support forces who wanted the Confederate flag restored to the top of the South Carolina statehouse. (Although McCain changed his position after the election, he in fact supported the pro-flag forces at the time.) The Bush campaign denied any role in the mailing, even though Hines is an old friend of Bush's South Carolina strategist, Warren Tompkins -- a Lee Atwater protégé widely credited with turning the Bush candidacy around by launching a vicious campaign against McCain, who was coming off a big win in the New Hampshire primary.

As Newsweek magazine reported after the South Carolina primary: "Tompkins' first move was to have Bush appear at a school (Bob Jones U.) that banned interracial dating, because he said, 'we had to build a wall between McCain and the social conservatives.'" Another key development, Newsweek said, was when "McCain was accused of waffling on the Confederate flag in a letter by Richard Hines."

Bush disavowed any connection with Hines and the flag mailer after the South Carolina primary. But Hines' own Web site contradicts Bush's denial of a political tie between the two men. "His history of political activism was, most recently, extended to aid the campaign of President Bush in the South Carolina primary of the 2000 Presidential election," the site states, adding that Hines, "has an active voice in the current Bush administration."

During the 2000 campaign, Bush faced criticism for other gestures to pro-Confederacy groups. The magazine Southern Exposure revealed letters Bush wrote as Texas governor hailing the United Daughters of the Confederacy's 100th anniversary and honoring the Sons of Confederate Veterans. While such Confederate groups often insist they promote "heritage, not hate," many of their leaders have been tied to segregationist causes and right-wing Republican politics.

It's easy to see why Bush might want to distance himself from Hines. In 1998, Hines was an official in the Heritage Recognition Association, whose president denounced the NAACP as "a racist hate group." Hines, a member of Sons of Confederate Veterans, criticized Gov. James Gilmore of Virginia for issuing a resolution during Confederate Heritage month that acknowledged the horrors of slavery.

"Why is the South singled out?" Hines asked, noting that other nations also had slaves.

In 1996, Hines held up a Confederate battle flag while protesting the placement of a statue of African-American tennis star Arthur Ashe on Richmond, Va.'s Monument Avenue, which features statues of Robert E. Lee and other Confederate heroes. "The intent of the placement of the statue was to debunk our heritage," Hines said.

Hines has also organized numerous events marking the births of Confederate President Jefferson Davis and Gen. Robert E. Lee. In 1994, Hines was stopped by Capitol police when he tried to display a Confederate flag at an event at the Capitol celebrating Lee's birthday.

But Hines is no stranger to mainstream Republican politics. He was co-chairman of Ronald Reagan's 1980 presidential campaign in South Carolina and worked on Pat Robertson's failed 1988 presidential run. He and his wife, Patricia, have both served in Republican administrations. Under Reagan, Richard Hines worked at the General Services Administration while Patricia worked in the White House Office of Domestic Affairs. Patricia Hines went on to become a deputy assistant secretary of the Army during the first Bush administration.

Through his role in Confederate heritage organizations and his political activities, Hines has been a champion of Southern culture and symbols, chief among them the Confederate battle flag. After the 2000 South Carolina primary, Hines wrote a letter to the Washington Times stating, "This brouhaha has caused many people to look afresh at the issues in the War of 1861-65, to the decided benefit of the memory of the Confederate cause."

But Hines has had his run-ins with his fellow neo-Confederates as well. He's been in the center of a power struggle between Confederate groups, marked by a 15-year legal and political struggle with John Edward Hurley, president of the Confederate Memorial Association. Hurley claims Hines tried to take over the association and turn it into a fundraising front for conservative political causes. The cost of the fight forced the association to sell off its $500,000 museum building at 1322 Vermont Ave. in Washington D.C., and continues to wind its way through the courts.

"I'd rather sell it than turn it over to those people," Hurley says. The great-grandson of a Confederate cavalry officer, Hurley has sometimes been depicted as a kook because of the flurry of lawsuits and inflammatory charges he's leveled at Hines over the years. Hurley insists the trouble began because Hines, along with conservative politicians and political operatives, tried to turn CMA from a cultural heritage museum into a fundraising operation.

"There was a move to radicalize the CMA in the early 1980s," Hurley says. "They wanted it to become a far-right radical institution. I don't think there was any question about that."

Hurley says the last straw came in 1986 when Hines and Navy Rear Admiral James Carey tried to use CMA to raise money for wars being fought in Afghanistan and Nicaragua. "They planned a 'freedom fighter' night, to raise money for the Contras in Nicaragua and the Committee for a Free Afghanistan. I canceled it. I wrote a polite letter to these guys, saying thanks but no thanks. I didn't realize at the time I was poking a stick in the eye of an 800-pound gorilla."

Hines did not return calls for this story, though he once told the New York Times that "John Hurley's like [President Ford's would-be assassin] Squeaky Fromme. He'll do anything to get press attention."

To Yankees and liberals, the notion that the president sends a Confederate Memorial wreath at all might be shocking, but it's a long-standing bipartisan tradition. In fact, during the 2000 presidential campaign, Fox News revealed that Al Gore gave Hines' organization $40 for a wreath to be placed at the memorial in 1992. A Gore spokesman said at the time that Gore knew nothing of Hines' right-wing ties and was simply honoring fallen Confederate soldiers.

Hurley claims that infighting between his Confederate group, which used to organize the White House wreath laying, and Hines' organization led the first Bush White House to stop sending the wreath in 1990 -- but that the second Bush administration resumed the practice and began sending the wreath to the Hines faction. The New York Times reported on the elder Bush's decision at the time, saying the president had canceled the wreath laying "anxious to sidestep the squabble." Now the White House insists the first Bush administration didn't cancel the wreath laying, but rather changed the day the wreath arrived, from Confederate Memorial Day on June 3 to national Memorial Day on the third Monday in May. Administration sources as well as the U.S. Army Military District of Washington, which oversees wreath-laying ceremonies at Arlington, say the wreath laying continued annually under Clinton.

Undeterred by the White House explanation, Hurley continues to insist that the Hines' group now getting the wreath is "payback" for Hines' work on Bush's behalf. And he hasn't given up on payback of his own. After Hines' role with the anti-McCain mailing came to light, Hurley filed a complaint that Hines had violated the Foreign Agents Registration Act -- because of previous lobbying work for the government of Cambodia -- a violation punishable by up to $10,000 in fines and five years in jail. Hurley said he personally called Attorney General John Ashcroft's office "three or four times," but that his complaint never went anywhere.

"They just refuse to move on it," Hurley says, adding that "Ashcroft and Hines are pretty buddy-buddy." It was Hines who arranged Ashcroft's 1999 interview with Southern Partisan, where Ashcroft praised Confederate heroes like Jefferson Davis and Robert E. Lee as "patriots," which dogged his effort to become attorney general. But Hurley says he's not giving up.

"I won't step aside, especially for people like [Hines]. I'm a real Southerner. You can't try to pull this muscle on me."