Music 2002: The year that squeaked 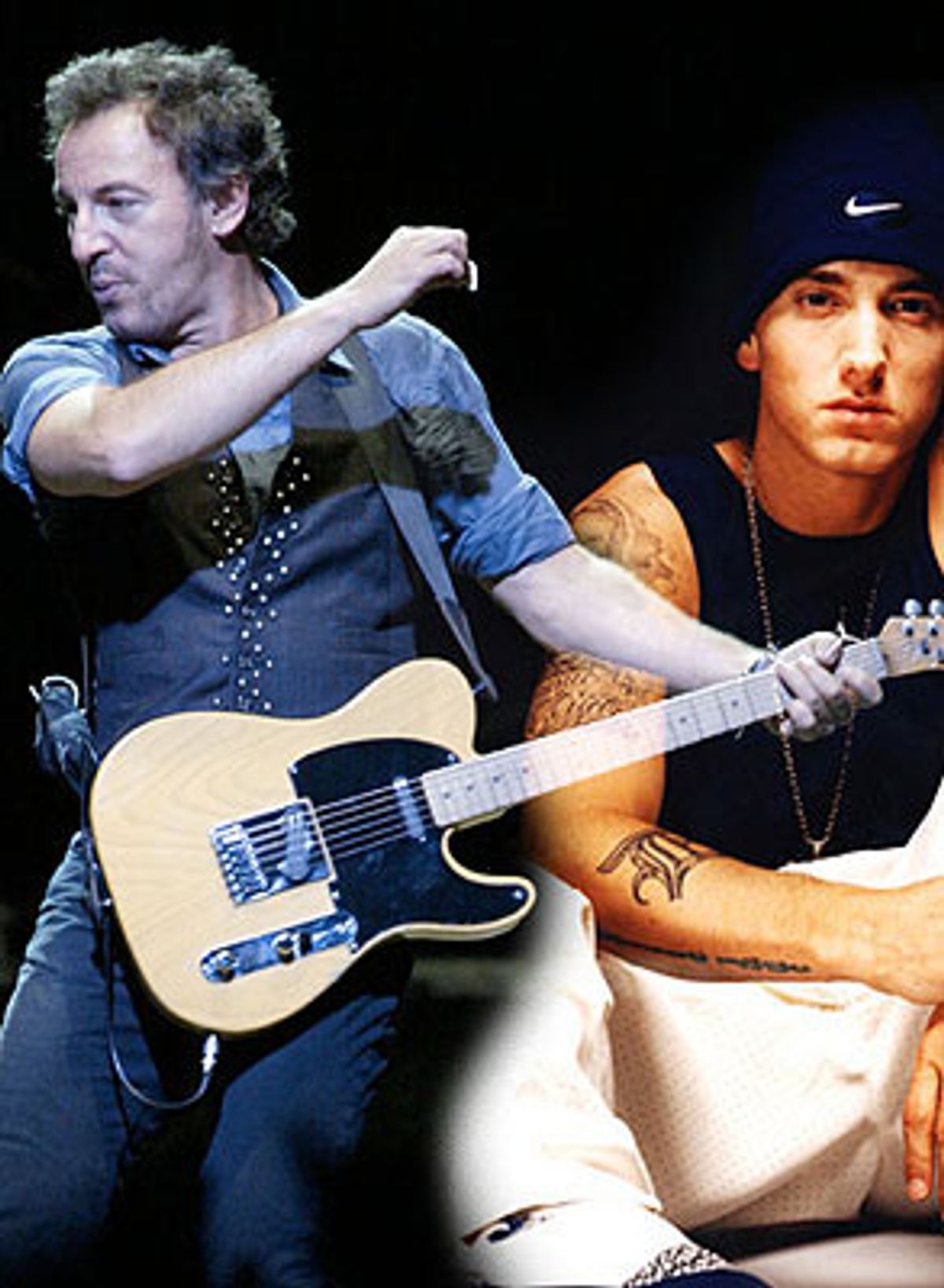 It was a vicious slur against all of humanity. It was terror in its rawest form. It was so, so, sooooooo playing to the wrong room. Here we all were, sitting in the living room, half in the bag, eating our way out of a box Jolly Time Butter Bomb and then, coming back from the commercial break: Eminem getting all up in Moby and Triumph's faces! On live TV! On the MTV Video Music Awards, no less!

I mean, who the fuck picks a fight with Moby? Moby is a Christian -- and not even the weird scary kind either, just the cool Ghandi/E.T. kind. And Triumph the Insult Comic Dog? Man, that is just folly, starting shit with a puppet! Because as sure as shit, the next day, there's Triumph the Insult Comic Dog having a press conference, saying what everyone's been thinking all along:

"Everyone, please. Let's all try to be easy on Eminem. At the end of the day, he's just another white guy trying to make an honest living stealing black people's music."

Ah, 2002. So fresh, so clean, so ... dirty. The megastarring of Em wasn't the only thing that left a bad taste in my mouth this year, but it was the one that stuck the most. Every time I saw a review in which some dopey film critic was all like, "Duhh, heyyy, Eminem can really act," it was like drinking a beer someone had ashed in. It brought Triumph's barb that much closer to being true; it made me embarrassed to be an American, where people were actually willing to buy Em's whole "I don't hate fags cause look: I'm down with Elton-John!" jive; it made me think that the points put forth in "Bowling for Columbine" were not just more liberal set-em-up, knock-em-down defeatist bullshit -- that all of that was true, that we'd been beaten just by the sheer, manic mass confusion that is Life in America. I felt like that scene in the Big Lebowski where Lebowski shouts the Dude down the hall, smugly crying: "I have news for you, sir! Your war is over! The bums lost! I suggest you go do like the rest of us and get yourself a job."

It was that kind of year. Because up there on the podium was Marshall Mathers, easily one of the most hateful people on the planet, doing one of the more ridiculous things I've ever seen on television -- threatening Moby -- while accepting an award. Now, don't get me wrong: Moby's music is kinda dumb and, hey, not for nothing, at the end of the day might be almost as ill-at-ease with the race issue as Eminem's (i.e., Moby made a mint off sampling dead black people; Em made more just by being friends with 'em and selling it upstream as something "dangerous"). But still: It's nice having Moby around. The man owns a tea shop, for Chrissakes.

It is not nice, however, having Eminem around. You think the bully culture in this country is bad? Eminem plays to every teenage boy's worst instincts enough to soundtrack one Columbine per month. It's a slippery slope we got on when we made Eminem famous; and it only got worse this year when we made him, somehow, not a joke, a slur, a snide rallying cry for all that is cruel and sick-hearted.

Nothing for me, articulated the year's tone of drawn-out disappointment more perfectly: Frivolity whilst waiting for the other shoe to drop. And for once in a good long while, that tone was not just a comment on the music industry itself -- still stealing souls and now selling fewer $18.99 CDs than last year and continuing to blame it on the Internet -- but rather, something that is in the air out there at this very moment, a bad-trip electrical current known not as War, but maybe worse, the Waiting for It.

It was out there, and as awful as the feeling was, it was at least something everyone could relate to. Because, really, that's the same feeling we all had in the '80s. And you could hear it everywhere, with the electroclash movement speaking perfect Reagan-ese, teen pop morphing into Justin Timberlake's year-long Jacko paraphrase and stupid white guys -- Stripes and Strokes and Interpol -- feigning indifference a la the Jesus And Mary Chain, the Cure, et al. With so much restless quoting of the more or less immediate past, it was a miracle that any actual art got produced at all.

Now here's the part where I talk about what was good -- briefly -- before going back to all that wasn't good, like that stupid new Beck album where he pretends to be Jackson Browne, so I should warn you now: This is also the part that people who have trouble with the collision of indie and mass culture each producing equally great and awful artifacts better leave. Because, um, you know what was good?

Mash-ups were good. Good like Whip-Its. Like, the one where Kylie Minogue sings over New Order's "Blue Monday?" Brilliant! What about the one where they put the vocal track from Salt-N-Pepa's "Push It" over "I Wanna Be Your Dog" by the Stooges? Possibly the best record ever. At long last, the widespread availability of computer programs like Acid did everyone some good: Now anyone can strip the vocals out of one song and drop them over somebody else's copyrighted hit. That makes mash-ups they year's real advance in populist art, an everyman joke on the pop music world melded with dancefloor deliverance. They might be disposable -- we'll certainly be sick of them in five minutes if we aren't already -- but damn if they weren't fun.

And not that kind of forced-fun that the Hives were promoting, either, by dressing up garage rock and acting like there's something new under the sun with that. No, no, no: There was crazy fun to be had -- albeit vaguely spooky end-of-the-world fun -- in Nelly's rally against the tyranny of proper spelling, "Hot in Herrre," to say nothing of the aforementioned Kylie Minogue, whose airbrushed photos actually look real when you see them next to a picture of Christina Aguilera going for the same pop diva prize, but now, with skankified alien powers. Even indie-rockers, those endless sources of fun-in-sarcastic-quotation-marks, pitched in on the fun drive: The Yeah Yeah Yeahs kicked ass without letting polemics get in the way, and Interpol made a record so hilariously indebted to Joy Division and Echo and the Bunnymen that you just had to smile.

But no one -- and I mean no one -- produced an album that could do in 70 minutes what Missy Elliott's "Work It" did in just three. "Work It" breathed new air into hip hop -- if not music that is heard on Top 40 radio as a whole -- in such a way as to remind us everything that was good about it in the first place. And even though it was sandwiched between two classic hip-hop loops ("Request Line"/"Peter Piper"), the track wasn't a throwback -- in fact, Elliott innovated willy-nilly all over it: backward rhymes, funny animal sounds, pidgin Chinese rapping -- the whole magilla.

But these were deviations from the norm: What else could you expect but bummers in a year when Enrique Eglesias affects a "rock" look, emo becomes the new hair metal and the arrival of a forgotten Nirvana castoff is praised as manna from heaven? In the year of the bummer, oddly enough, though, even the bummers were lame because we all know this much is true: Popular (or even un-popular, best as I could tell) music still failed at producing an appropriate response to 9/11. But maybe that's as it should be. After all, it says something about the kinds of times we live in that we've even been expecting one -- do you think that people back in the day were bitching about how there were no good songs about, say, the Hindenberg disaster or the Spanish Inquisition?

At the very least, though, people were trying: Springsteen's reappearance in the wake of "The Rising" somehow seemed more important than the album itself; it turned out that we needed him -- if nothing else, just as a reminder that you could have dignity and soul during this time without being bloodthirsty -- more than the songs, which had their hearts in the right place but were probably written too soon. That's the thing about 9/11 in art and culture: It's gonna take awhile before any artists can really see the forest for the trees. In the meantime, we're going to have nice trys (thank you, Boss) peppered with things like Steve Earle's "John Walker Blues," which came off as overly simple, a touch opportunistic and generally boneheaded no matter what side of the issue you were on. For the moment, it seemed like Wilco's "Yankee Hotel Foxtrot" -- recorded well before the tragedy occurred -- would have to suffice as pop music's most succinct comment on The Way We Live Now. Better that, with its wispy intimations of a limping modern world, than the head-in-the-sand hope-against-hope of "We Are All Made of Stars" or even worse, the tired flurry of blame that is Marshall Mathers. Because in 2002, you had to take dignity wherever you could find it -- even if it was from the year before.