The newsweekly gushes over the V.P. and the Bush administration in its year-end issue -- ignoring its own poll showing a major erosion in public support for the White House. 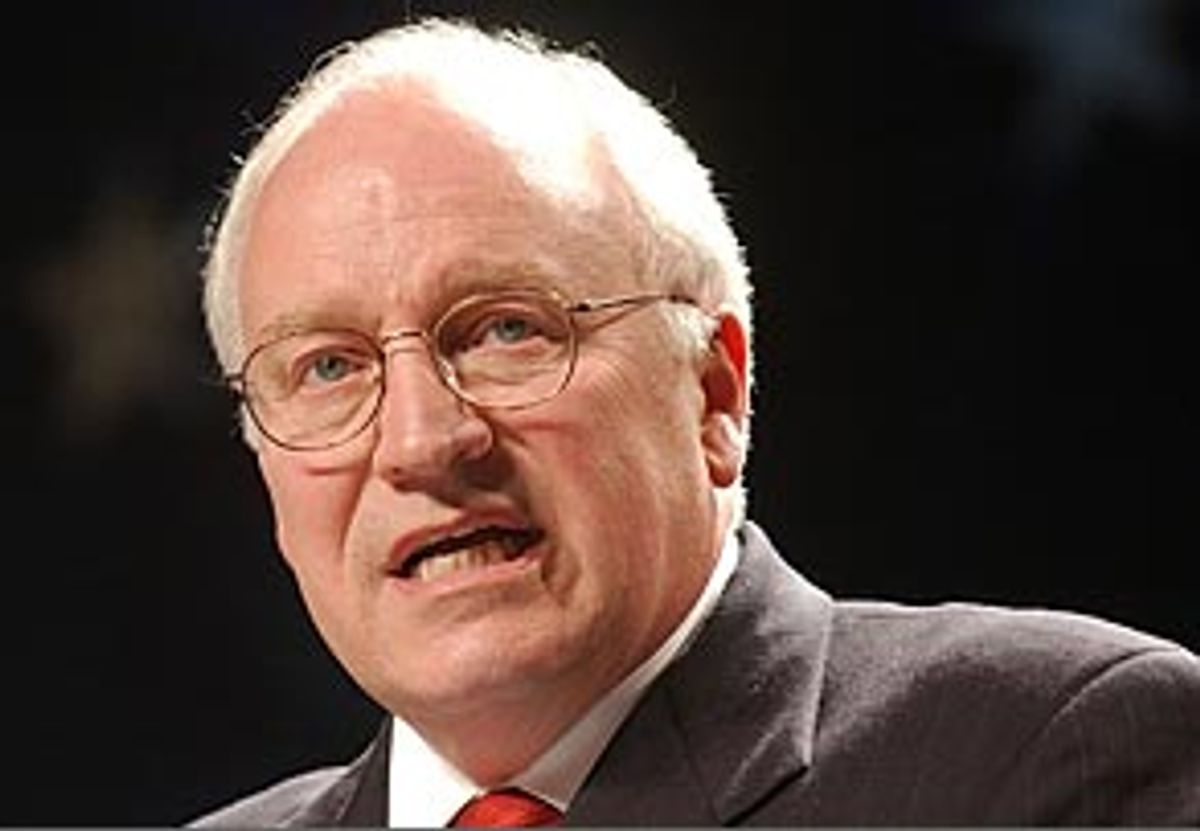 Time magazine's year-end double issue, on newsstands until Monday, is bursting with praise for the White House, and specifically Vice President Dick Cheney, who receives the red-carpet treatment from the newsweekly. In the loving hands of Time writers, the reclusive V.P. even manages to upstage Cynthia Cooper, Sherron Watkins, and Coleen Rowley, the trio of whistle-blowers who appear on the issue's cover.

The 9,700-word avalanche of Cheney puffery is composed of one long essay, another biographical profile, and a chat with his wife. (Despite the big-time rollout, Time writers didn't land any on-the-record face time with Cheney.) There's also a nifty photo essay at Time.com chronicling Cheney's all-American life: There he is as a Little Leaguer, attending his high school prom, etc.

The centerpiece of Time's package is an essay by Nancy Gibbs that trumpets the Bush-Cheney relationship as "Partnership of the Year." A gauzy, heroic painting of the two men takes up almost a full two-page spread: Below it, the lead runs, "This war has two faces, one a promise, one a growl." You'd think the Time editors and writers had collectively stumbled into a time machine set for 1944. The theme of the package, put together by no fewer than 12 writers and reporters, is that Cheney, with his hard work, discipline, smarts and loyalty ("steady and stalwart") has become "the most powerful deputy ever" -- and has transformed our president into a much more effective leader.

The stories are stocked with laudatory quotes from anonymous White House officials ("With Cheney, it's all logical and deliberate and thought through") and laudatory quotes from on-the-record White House officials ("You can't give him too much information. He just swallows it and asks for more"). Above it all, the high rhetoric of wartime patriotism arches: "Together [Bush and Cheney] are leading us along a rough road with sharp curves, and while we may argue about where we're heading, we have no choice but to follow, because a nation fights as one."

After purple, rally-round-the-flag prose like this, it's not surprising that Cheney's difficulties are given short shrift. The mini-scandal arising from his richly rewarded leadership of the embattled oil-services corporation Halliburton is cursorily discussed at the end of the essay. Halliburton's massive asbestos-related liabilities, and Cheney's efforts as its CEO to limit asbestos lawsuits, are not even mentioned. Even more blatantly, Time frames his refusal to reveal which big-oil honchos met with his energy policy task force as revealing only that "there was something garage-floor quirky about him: the master mechanic knows how to build any car by hand, but he doesn't have a clue about how to sell one." It's a non-critique reminiscent of the New York Times' notorious softball slaps at former special prosecutor Kenneth Starr for having a "tin ear" for public relations.

Time's boosterish coverage is typical of what so many mainstream media outlets have been producing since the Sept. 11 attacks, when it became politically incorrect among bigfoot Beltway journalists to criticize the Bush administration during "wartime." What makes this particular example of flag waving stand out, however -- and not in a good way -- is a little graphic box that appears on Page 90, at the bottom of the fourth page of the Cheney essay, which suggests Time's readers are far less enamored of the Bush White House than the magazine is.

The box highlights the latest results of a CNN/Time poll of 1,006 American adults taken on Dec. 17-18. Among the questions they were asked was whether Cheney "is a leader you can trust." A majority of those polled, 51 percent, said they did not trust him; just 42 percent said they did. For some reason, nowhere in Time's endless, breathless encomium to Cheney can that little detail be found.

Instead, Time wrote that for American anxious about war, "it's not enough for people to like Bush; they have to follow him, and for many, that's easier when he has Cheney marching at his side." Why people would feel better about marching to war behind Cheney when most Americans don't trust him is a knot Time doesn't bother to untangle. Cue "The Star-Spangled Banner"!

As for Bush, his trust ratings are only slightly better. According to the same CNN/Time poll, just 50 percent trust him, while 48 percent do not. Basically it's a tie, given the poll's margin of error of 3.5 percent. But that doesn't stop Time from insisting, "Most Americans are inclined to give Bush the benefit of the doubt; they trust his motives and approve of his performance." Most Americans?

The same poll found that just 55 percent of Americans approve of the way Bush is handling his job, while 37 percent disapprove. The 55 percent is a bit of a jaw-dropper, because since 9/11, when Bush's job-approval scores skyrocketed, he's never dipped as low as 55 in any major poll. In fact, the 55 rivals Bush's lowest approval ratings since he took office two years ago. Yet Time made absolutely no mention of the poll results within the text of its exhaustive year-end study of the White House.

What's even more astounding is that Bush's numbers, according to the CNN/Time poll, cratered right after the November midterm elections, which were widely seen as a triumph for the White House. Reading the printed graphics of the Time poll, it appears Bush's approval ratings dropped 7 points between mid-November and mid-December, while his disapproval rating climbed an additional 7 points during the same time frame. In other words, there was a 14-point swing in just 30 days, yet Time doesn't consider that to be newsworthy.

It's true Bush's ratings have been on a slow, steady decline for months, coming down from historic highs following 9/11. But it's telling that the December dip in the CNN/Time poll followed a modest October-to-November gain for Bush in the same survey. That means his job approval ratings took a U-turn for the worse last month, his first in more than a year.

What could account for the sharp change? Take a look at the answers to the poll question about a possible war with Iraq: "Should the U.S. attack nations that harbor terrorists or have weapons of mass destruction even if these countries have not attacked the U.S. first?" Of the respondents, 43 percent agreed with the White House's new policy of preemption; 46 percent disagreed. Those are woeful numbers for an administration that has spent the past 12 months trying to build public support for war.

It seems obvious Time was determined to end the year with a laudatory package on Cheney and Bush, our wartime leaders. And when its own survey revealed some startling, unflattering data that didn't fit in with the magazine's glowing prose, Time simply buried it and hoped no one would notice.