People with the rare condition called Asperger Syndrome can be brilliant, but they're unable to read the human face or the simplest social cue. 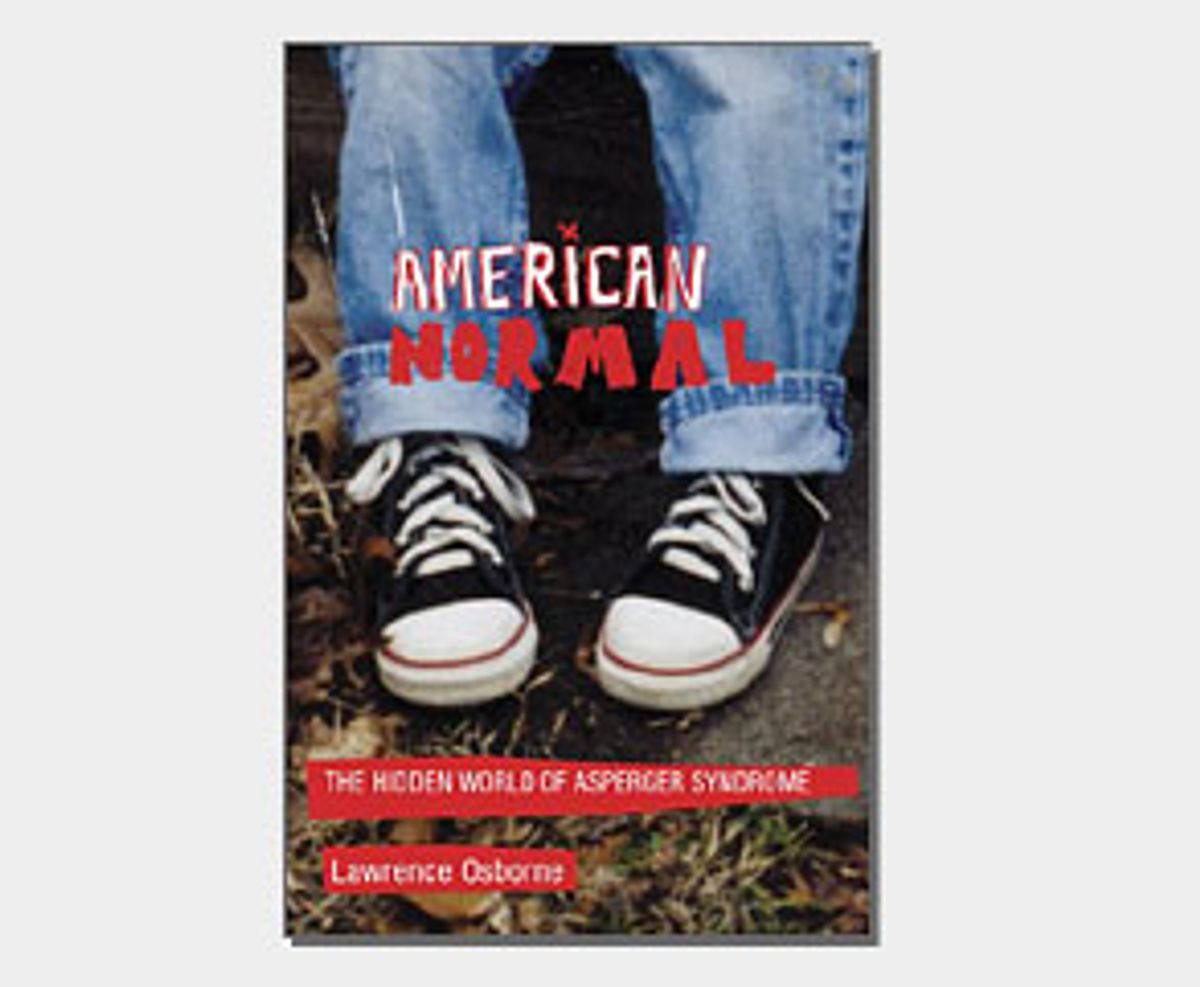 The pianist Glenn Gould most likely had it; Albert Einstein, Béla Bartók and Thomas Jefferson probably did as well. And Bill Gates shows a number of the traits.

Asperger Syndrome, as Lawrence Osborne explains in his idiosyncratic, intelligent and compassionate book "American Normal: The Hidden World of Asperger Syndrome," is a specific and rare form of "high-functioning" autism. That is, although people with Asperger's are generally very intelligent and appear normal enough to blend fairly well into the society around them, they have pronounced difficulties when interacting with others. "Essentially, for reasons that are completely unknown, Asperger's people cannot read the human face or its emotions," Osborne writes. "They cannot learn social rules, nuances or metaphors. Often brilliant intellectually, they cannot read the simplest social cue or hint: instead, rigid obsessions, often numerical, dominate their inner life."

Children with Asperger's might memorize whole TV shows, which they will recite word-for-word, or learn everything there is to know about, say, vacuum cleaners. One child memorized the address, phone number and ZIP code of every member of Congress. As adults, Asperger people (Osborne notes that it's not uncommon for people who have been diagnosed with Asperger's to identify themselves as if they were the syndrome itself, by saying, for example, "I'm Asperger") might exhibit behavior like that of Darius McCollum, a semilegendary New Yorker who learned every detail of the New York City subway system, the intricacies of which he loved. ("How can I describe it?" McCollum once said. "I like the scenery. I like the schedules.") McCollum eventually received a prison sentence for first pulling a train emergency brake and then rushing to the "rescue" dressed as a transit supervisor.

McCollum's behavior may have been bizarre, but he truly meant no harm, and Osborne's assessment of his case is bracingly sympathetic. And that's where "American Normal" diverges from most books written about disorders and ailments, which tend to be written by experts or specialists or people with some sort of firsthand experience. Those books may be helpful in their way, but they can also go heavy on dull statistics and insights that aren't particularly challenging. Osborne (who has reviewed books in these pages) has written a book for the common reader; he's not a specialist, but simply a writer, and a fine one. And he's motivated by curiosity, the best spur for both writers and readers alike. "American Normal" is one of those books that's conspiratorially informative -- it makes us feel we're discovering something about a new subject alongside the writer, instead of being educated, at considerable remove, after the fact.

Osborne has done his research. He explains how Asperger's first came to light. (It's named after Hans Asperger, the Austrian doctor who pinpointed the syndrome and helped develop innovative and surprisingly advanced ways to deal with Asperger children.) He has attended conferences and support groups, and has met and spent time with people of all ages who have Asperger's. He writes about them as people, never as specimens.

"American Normal" consists largely of Osborne's thoughtful and highly personal observations; it's astonishingly readable, and often downright entertaining. One of Osborne's concerns is that, particularly in America, "problem" children are often diagnosed with this or that disorder and hustled onto some sort of medication. He worries that in some cases, at least, we may be medicating the childhood right out of children.

At an Asperger's and Autism Conference in St. Louis, for example, Osborne listens to a paper given by a woman whose son, Nicky, was diagnosed with Asperger's at age 7. His behavior included whirling around uncontrollably (when asked what he wanted to do when he grew up, he'd say, "I want to be a screwdriver!"); he also had difficulty sleeping and a tendency to throw temper tantrums.

But Nicky also loved everything to do with ships. He made his bedroom look like a ship, and he sang old sailing songs over and over again. Osborne describes seeing a picture of Nicky, "a slender fair-haired elf in a yellow hat sitting in his nautical room with a huge 'sail' suspended above him." He explains that Nicky "would spend much of his day building Lego ships, then destroying them. In all, he looked like an interesting kid, and I immediately wanted to meet him."

Osborne goes on to describe the treatments applied to Nicky (they included eliminating sugar, wheat and cow's milk from his diet, as well as administering Prozac and Valium) and the tips Nicky's mother had for dealing with similar "problem" children (such as "Initiate functioning interaction" and "Develop self-monitoring and self-management skills, create predictability").

Without being wholly unsympathetic to parents at the end of their rope -- how, exactly, does one deal with a child whose chief desire is to be a screwdriver? -- Osborne wonders aloud at the language used by most of the conference attendees. "It appeared essentially to be a corporate lingo whose vocabulary was relentlessly technical ... The child is seen simply as a machine which has gone wrong."

In a compact, funny and sharply written passage, Osborne describes the way he escaped, at the age of 9, from his own birthday party, a carefully planned event ("complete with a professional clown and fire-eater") that he had been dreading. (The actual escape was a feat of derring-do involving two sheets tied together, which he used to lower himself from his bedroom window.) And as a youngster growing up in England, Osborne was obsessed with the lute, which he considered deeply odd; its oddness in turn seemed sexy to him. As much as he loved this difficult-to-play instrument, its idiosyncrasies got the better of him one day, and he dashed his beloved lute to pieces on the road outside his family's home. (A passerby rang the doorbell and said to Osborne's mother, "I've found some pieces of lute in the road, madam. Are they yours?")

While Osborne doesn't claim to have Asperger's, he does wonder if these and other childhood (as well as adult) obsessions don't themselves seem a little Aspergerish. He also wonders if diagnoses of Asperger's and other syndromes or disorders aren't sometimes misapplied: "As the whole notion of individual eccentricity declines in Western culture, we come to rely more and more on the notion of medical disorder, and an array of syndromes that can be applied to all who are strange, or simply solitary."

Without diminishing the difficulties that people with Asperger's face -- the time he spends with such people makes their troubles, sometimes bordering on anguish, quite clear -- he does strive to show how, in some ways, they're not so different from "neurotypicals," or NTs, like you and me. And then, of course, there are the ways in which their differences are a kind of superiority. Osborne isn't out to romanticize Asperger's Syndrome, but he is open to the ways in which Asperger people see the world differently. He describes, for example, the way they sometimes express their thoughts in surrealist metaphors that make absolute sense. For example, "My sleep today was long but thin," or "I don't like the blinding sun, nor the dark, but best I like the mottled dark."

Osborne also spends some time chatting with some Asperger adults at a meeting, who mournfully admit that it's very difficult for them to find girlfriends (some 80 percent of people with Asperger's are boys or men). But they're blazingly intelligent and, Osborne finds, charming in a very specific way. One of them speaks of his desire to move once and for all to Hawaii. (He connects, Osborne explains, with Hawaii's "volcanic dramas, prehistoric greenness and sense of oceanic isolation.") "The mainland," the young man says with a sigh. "It's so NT."

Osborne's book is a fabulous example of the rather old-fashioned -- and, sadly, largely outmoded -- notion of allowing a curious, intelligent writer loose on a subject that interests him, even though he or she might not be a "known expert" or "specialist" in the field. What Osborne does have on his side is considerable: research, passion, clarity of thought, the ability to impart information in a way that's readable and entertaining. There are probably some persnickety scientific types out there who will object to the fact that a mere journalist -- in their eyes, a regular Joe -- has dared to write a book like "American Normal." Shouldn't such a book be written by a professional with years of experience in the field? Maybe. But then, that way of thinking is so NT.