In a bewildering year that offers no clear Oscar favorites, the National Society of Film Critics spurns Scorsese, Nicole and orchids in favor of Roman Polanski's Holocaust drama. 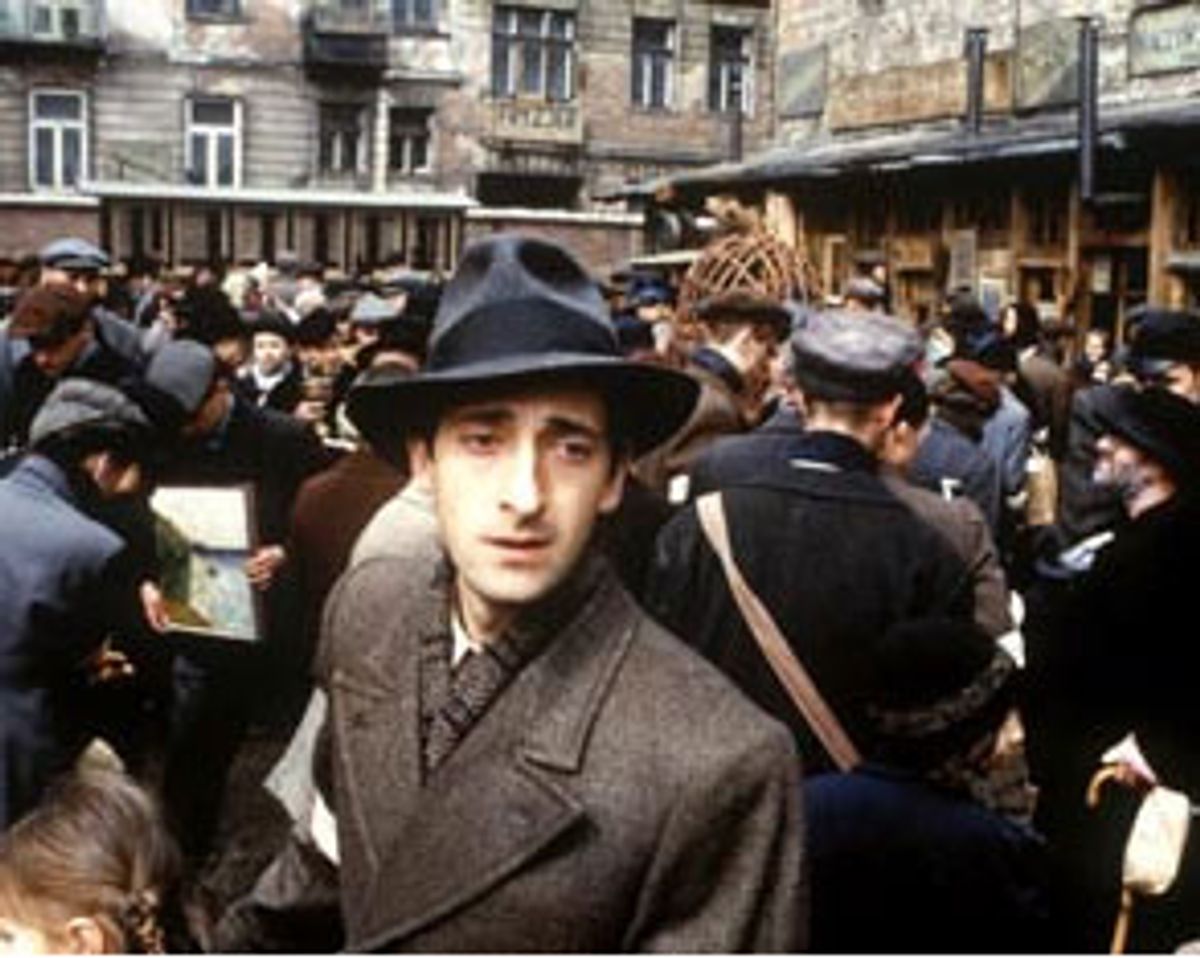 Roman Polanski's "The Pianist," a film that echoes the director's own experiences as a boy hiding in Nazi-occupied Poland, took top honors at this year's meeting of the National Society of Film Critics in New York on Monday. Not only did "The Pianist" take the award for best film and a best director nod for Polanski, it also won a best actor award for Adrien Brody and a best screenplay award for Ronald Harwood. Two other spectacular performances, Michael Caine's in "The Quiet American" and Aurélien Recoing's in Laurent Cantet's "Time Out," were, respectively, the first and second runner-up in the best actor category.

If there was anything unusual about this year's awards, it was that highly touted movies like "Adaptation," "Gangs of New York," "The Hours" and "Bowling for Columbine" won nothing. Apart from "The Pianist," the only film to win more than one award was Todd Haynes' "Far From Heaven," which took the best supporting actress award for Patricia Clarkson and a best cinematography award for Edward Lachman. The runners-up in the cinematography category were Pawel Edelman for "The Pianist," and Robert Elswit for "Punch-Drunk Love," a film that had notable support in several categories, including best actor votes for Adam Sandler.

The NSFC, which comprises 55 members from around the country, employs a voting system in which voters list their top three choices in each category, weighted in order of preference. The winners are those choices that receive a majority of votes and appear on a plurality of ballots. That system led to the closest voting of the day in the best supporting actress category. Clarkson, in "Far From Heaven," and Fiona Shaw, in "The Triumph of Love," garnered the same number of points. Clarkson, however, appeared on one more ballot than Shaw and edged her out. Shaw is currently gaining raves on Broadway for her performance in "Medea." Her hairsbreadth loss should come as a relief to Paramount Classics, the distributor of "The Triumph of Love," which did next to nothing to promote the film. (When NSFC members tried to contact Paramount Classics to request screeners of "The Triumph of Love," they were told that none were available, even though the DVD was already available in stores.) The second runner-up for best supporting actress was Kathy Bates in "About Schmidt."

In the best actress category, Diane Lane's performance in "Unfaithful" finished far ahead of the runners-up who tied for second place, Isabelle Huppert in "The Piano Teacher" and Maggie Gyllenhaal in "Secretary." The best supporting actor award went to Christopher Walken for "Catch Me If You Can." Runners-up in that category were Chris Cooper in "Adaptation" and Alan Arkin in "13 Conversations About One Thing."

Other than "The Pianist," the films that figured most prominently in the best film and best director awards were Alfonso Cuarón's "Y Tu Mamá También" and Pedro Almodóvar's "Talk to Her." Those films were the first and second runner-up in the best film category, respectively, with Almodóvar finishing as first runner-up for best director and Cuarón as second runner-up. "Y Tu Mamá También" took the best foreign film award, followed by "Talk to Her" and "Time Out."

Although, as film critic Kent Jones reported in the Village Voice, Michael Moore has accused those who don't favor "Bowling for Columbine" of being neoconservatives, the film didn't finish among the top four vote-getters for best nonfiction film at the National Society. The winner of that category was "Standing in the Shadows of Motown," with "The Cockettes," the film about the legendary West Coast drag troupe, coming in as first runner-up and Frederick Wiseman's "Domestic Violence" and the Robert Evans bio "The Kid Stays in the Picture" tying for second runner-up.

Though many regional critics' groups give year-end awards (New York, Los Angeles, Chicago and Boston among them), the National Society of Film Critics, founded in 1966, is one of the only national groups of critics to vote awards. This year, the society gave its Film Heritage award to distributor Kino International for its theatrical release of the restored long version of Fritz Lang's "Metropolis." The Society also cited Kino's DVD releases of Lang's "Die Nibelungen" and the boxed set of classic films by D.W. Griffith. And a special citation was awarded to the UCLA Film & Television Archive "for its long-lived and heroic work in film preservation, restoration and resurrection." Among the Archive's most notable recent projects was the assemblage of rehearsal and screen test footage from the only feature Charles Laughton ever directed, the 1955 "The Night of the Hunter." A critical and commercial failure on its release, Laughton's film has since been recognized as one of the greatest of all American movies.