I blew $700 on a famous psychic whose best talent was predicting my gullibility. 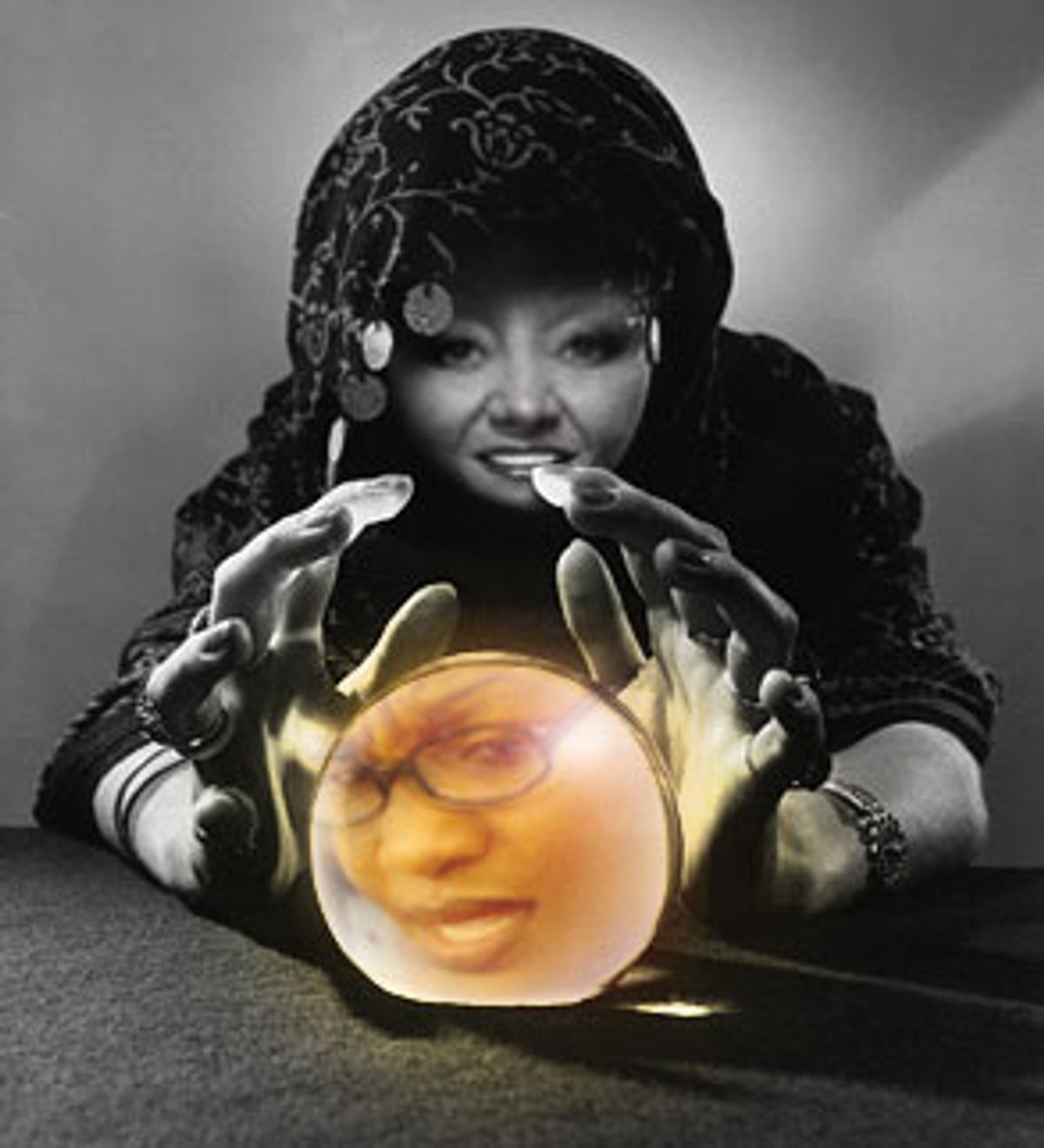 I don't know my future after this weekend and I don't want to.

Despite what you're about to read, I am arguably not a complete idiot.

I have degrees from three Ivy League schools in French literature, journalism and law. I've authored books. Three of them, to be exact. OK, so they're not "Anna Karenina" or "The Bluest Eye" or "The Years" but still, they're published and are on display atop my mother's dresser drawer, between the Eiffel Tower snow globe and the photo of me grinning next to a life-size cardboard replica of Bill Clinton.

And I'm not some gullible white-bread girl from Kansas. I'm streetwise, born and bred in a Brooklyn housing project.

So I wonder, how did an aging and undoubtedly bleached blonde with a crystal ball and the smoky voice of a barroom broad make a loser of a lawyer and a punk of a project girl -- and walk off with 700 of my hard-earned dollars?

I know exactly what went wrong; I'm an idiot.

My first error was to mistake CNN's Larry King for a journalist. King's universe of newsworthy interviewees consists mostly of actresses and babes who look like actresses, real actors and hunky inspirational speakers who look like actors, and real models and disfigured beauties made to look, after expensive reconstructive surgery, like models. And there are the famous psychics.

My second error was to jot down the name of famous psychic and regular "Larry King Live" guest Sylvia Browne, as I watched her perform. I don't believe in psychics. Really. But I was impressed by this one. I got chills watching her, hearing the gasps, squeals and sobs of callers as she shocked and comforted them with precise descriptions of their dearly departed loved ones. I'd seen Sylvia Browne solve mysteries and identify callers spirit guides and guardian angels, and confidently assure everyone that spouse, lover, dad, mom, son, daughter, sister, brother, grandparent, poodle was in heaven and doing great.

Something made me believe against reason that Sylvia Browne might give me the answers to questions that were troubling me. How could Sept. 11 have happened? Should I stay in Paris or move to New York, which in its sudden noble vulnerability seemed to be calling me home? Should I continue practicing law or would my fledgling writing career save me from a life of contract-churning drudgery?

With a mixture of curiosity, hope and embarrassment I went to Browne's Web site, read up on the famous psychic and swallowed so hard at the cost of a reading that I nearly choked ($750 for an in-person reading with Sylvia; those on a tight budget could consult her by telephone for $700 or talk with her presumably half-gifted son for half-price, $350). I made an appointment to have a telephone consultation, for which I had to pay in advance by credit card.

Then I was dogged by doubts and miserly misgivings, exacerbated by the reactions of friends, a group of overeducated, unevolved cynics with faint, dingy auras. They laughed at my enthusiasm for the famous psychic and even questioned the origin of the phone calls to the King show, smirking that the callers all seemed to be women from somewhere in Nova Scotia. But it's CNN, I protested, and they'd check for that kind of thing. Right?

"Honey, I'm a psychic," she'd answer time and again in that gravelly, cocky voice. I was taken. And how.

I'd been told the night before by Browne's corporation scheduler that Sylvia would call, tell me spontaneously about myself and my life, and then respond to questions. So I was sitting by the phone with my list of questions, sweating with anticipation, when the phone rang. On the other end was The Voice.

"I discovered you on 'Larry King Live' two years ago," I said breathlessly.

"Oh yeah, I've been on there five, six times. Janet, how are you doing with headaches and stomach and lower back?"

I rarely get headaches, have a steel trap for a stomach and go to the gym several times a week. But I searched for something, eager to get my reading off to a good start.

"I'd start doing some stomach crunches on the bed. Then I would really start trying to take some lecithin."

"OK," I said, writing down my instructions. It occurred to me that in our high-stress, sedentary world most people had headaches, stomachaches and lower back pain. But she was probably warming up before zeroing in on me specifically.

Why was she spelling it? Didn't she know that I was a spelling champion all through school?

She went on generically about protein and blood sugar and fatigue. I stared at the clock and my list of questions. She suggested I eat chicken and fish. I already did, and often.

Then she hit me with her psychic beam: "You're an activator and a catalyst and people like you need to have two or three things on the burner."

"It can get problematical in relationships," I said. Relationships. We were on our way. My money was being well spent, after all.

"Oh yeah, but not if you meet someone who's strong enough to handle it. Did you ever notice in the world people don't take well to strong women? We're all for strong men but when a woman gets strong everybody gets nervous.

A strong man? There weren't any men in my life. But I resisted the urge to speak, not wanting to give her cues or prompts.

"You have had kind of an alone time, but that's all right."

Alone? I hadn't been single for years. My neck began to tense. Maybe if I just gave her a little nudge in the right direction ... So I said I was conflicted about moving back to New York.

"Really?" I was puzzled. A born renter, I have never in my life owned a co-op, a condo, a house or even an empty lot.

"You can't go wrong, especially in the States where there's never been a time where there's been a buyer's -- and seller's -- market like there is now. I mean, you could buy something in Podunk, Idaho, and it's good."

What was she talking about?! This was my $700 reading? My stomach hurt. She hadn't been like this on "Larry King Live." She'd made sense. She knew what dead people looked like.

I gave her one more chance. I asked about Sept. 11.

Goofy?! I cast desperately for a topic that might offer some success. I asked again about relationships. She asked who was "the darker-haired one"? Hellooo! Surely she knew I'm black. Surely she knew that means almost everyone in my life has dark hair.

What about the spirit guides and angels she and Larry King had discussed?

You have, uh, four, uh, angels, and a very, very strong male guide by the name of Khalib."

"They're androgynous," she said with what I thought was a touch of impatience.

I always wanted a twin. What they hell, might as well ask her about that, too.

"You had one in a past life ... a hundred years ago ... in France. A twin sister. You two were inseparable and had a millinery shop in Versailles."

Black twins with a hat store in the King's court. Right.

I was screwed. I had thrown away in a half-hour more money than my poor project mother collects from Social Security in a month.

I wrapped it up with a question about my longevity.

"Oh, God, yes, a really long life," said the All Seeing One. "And thank God you won't be stupid or incapacitated. I don't mind living to be old as long as I'm not an idiot."

No danger there, Sylvia. I'm the idiot.

A few weeks later I requested a refund and was sent a standard Refund Policy letter: "The services provided by Sylvia Browne Corporation are highly speculative in nature and we do not guarantee that the results of our work will be satisfactory to a client."

Janet McDonald is the author of "Project Girl," a memoir tracing her troubled path as a high-IQ student from the projects to a successful law career. It will be published in January by Farrar, Straus and Giroux.