Resistance from McCain, Snowe, Chafee and others could spell trouble for the president's radical proposal. 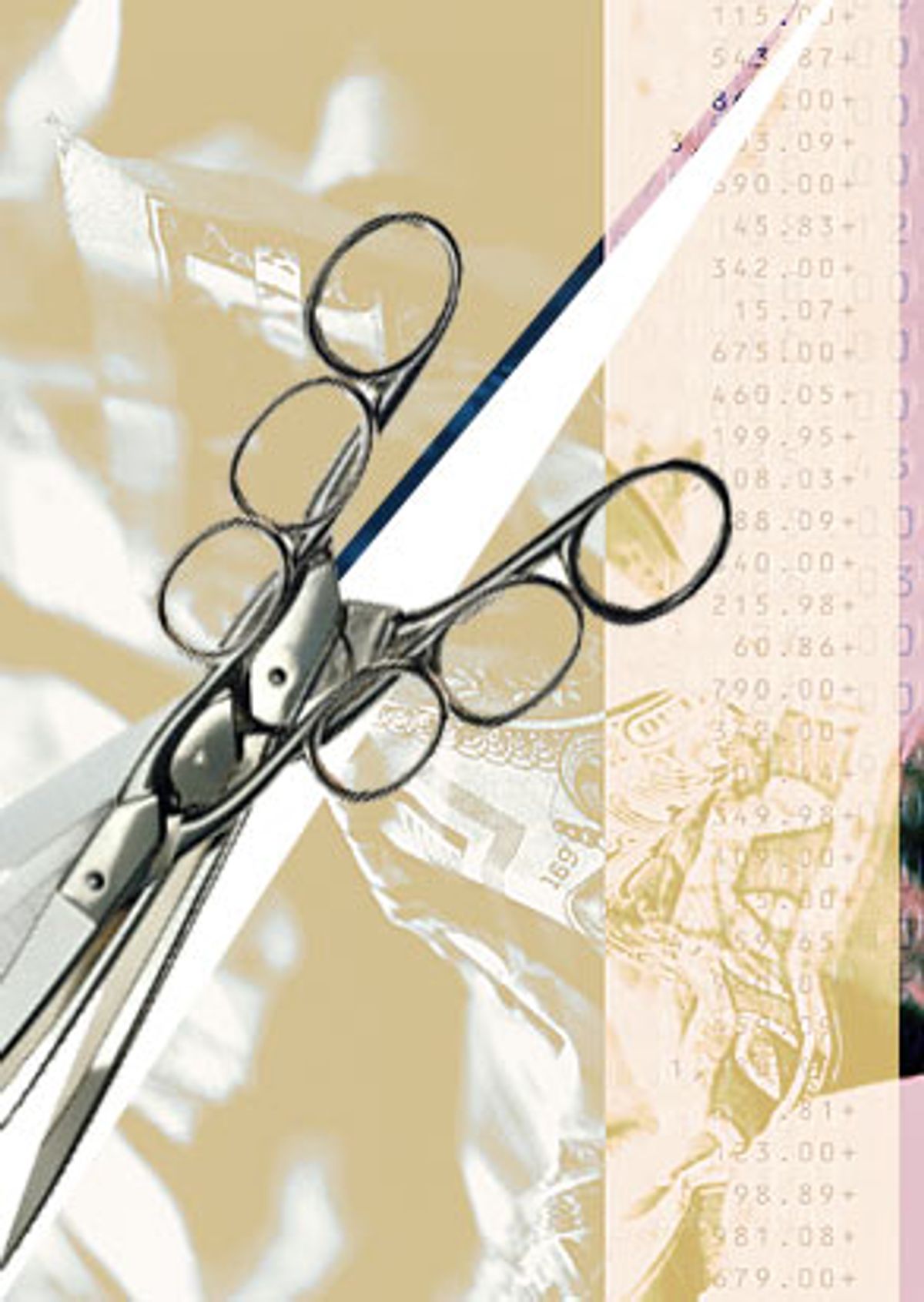 One day after President Bush proposed a $674 billion tax cut that would principally benefit the affluent, a corps of moderate Republicans delivered a curt response: In a time of imminent war and rising deficits, the tax cut is too big and will not pass without significant change.

The unusual public opposition from moderates in his own party and from centrist Democrats who supported his 2001 tax cut appeared to get the attention of the White House, and spokesman Ari Fleischer was already signaling Wednesday that Bush was ready to compromise. And while some analysts had suggested that Bush's first draft was designed mainly to score points with big GOP contributors, some past allies in the Senate said Bush had no choice but to back down.

Sen. Olympia Snowe, R-Maine, a member of the Senate Finance Committee, said she was pleased with some of the smaller-ticket items in the Bush plan, like the acceleration of the child-care tax credit and some targeted business cuts. But she balked at the $364 billion centerpiece of Bush's plan -- the elimination of the tax on corporate dividends -- citing the worrisome federal deficit.

"We must seek the balance needed to build bipartisan support on a stimulus plan that will stimulate the economy while also remaining fiscally responsible," she said. "At a time of growing federal deficits, it is especially important that this plan be right-sized without putting our future at risk."

Snowe was among the 60 senators who supported Bush's $1.3 trillion tax cut in May 2001, handing the president one of his first major legislative victories. That cut sailed through Congress, with 12 Democrats joining 48 Republicans in voting for the bill. But the initial resistance on Capitol Hill to Bush's new stimulus package may be the best measure of just how dramatically the country's economic and political landscapes have changed in two years.

The events of Sept. 11, 2001, triggered enormous spikes in defense spending and the largest reorganization of the federal government since the New Deal. Though the nation had enjoyed a $127 billion budget surplus in 2001, expenses shot past revenues to create an expected deficit of $165 billion in the current budget year. And many moderate Democrats who last fall seemed cowed by the threat of tough election battles now seem to be liberated and willing to criticize the president's new tax-cut package openly. Self-inflicted wounds from the 2002 midterm elections also remain fresh, and Senate Democrats seem more eager to draw sharp differences between themselves and the White House, particularly on domestic policy.

One influential Bush critic -- this one a Republican -- appeared ready to vote against another Bush tax-cut plan. "It is middle-income Americans that have kept our economy afloat by buying houses and automobiles," said Sen. John McCain of Arizona on MSNBC's "Hardball." "I believe that they deserve the majority of the break, not the higher-income level of Americans."

Sen. Lincoln Chafee, R-R.I., has scheduled a press conference Thursday to announce his opposition to the president's proposal to accelerate the 2001 tax cuts. That may not come as a huge surprise since Chafee and McCain were the only two Republicans to vote against the 2001 Bush tax cut.

"I would like to see a more balanced approach than the plan laid out by the president today," said Sen. Jim Jeffords, I-Vt., who voted for the 2001 tax cut, his last vote before bolting the GOP. "We need a plan that focuses more on the needs of people on Main Street rather than the needs of Wall Street."

Similar concerns were voiced by Sen. John Breaux, D-La., who also supported the 2001 cuts. Breaux cited the effect the new tax cuts would have on the federal deficit as his reason for balking at the new proposal.

"Bear in mind tax cuts are not free," Breaux told the Los Angeles Times. "We have to pay for them by increasing the size of the deficit. And we have a lot of other competing demands for dollars this year. Who knows what Iraq is going to cost? Who knows what Medicare reform and prescription drugs are going to cost?"

In reality, Bush has a little cushion to work with. The tax-cut bill will only need 50 votes to pass, and with 51 Republicans in the Senate, he can afford to lose some of the Democrats who voted for the 2001 tax cut. But opposition from Snowe and other Republicans is a more pressing problem for the White House.

"The president understands that we have a system in our country -- the president proposes, and it's Congress's responsibility to the American people to discuss it, to hold hearings and to exercise its judgment on the president's package," Fleischer said Wednesday. "I think he has shown over the last two years a very successful track record of fighting for what he believes in and working well with Congress to get it enacted. And that's exactly what he intends to do this time."

With bipartisan opposition to the plan already evident, there is some question about how much of this proposal will actually survive the legislative centrifuge. For now, though, the die-hard supply-siders are thrilled. One of those happy tax cutters is Veronique De Rugy, an analyst with the libertarian Cato Institute based in Washington. She says she has been critical of administration proposals in the past -- such as bills to boost education spending and federal farm subsidies -- but she couldn't be happier with the latest White House proposal.

"I wasn't expecting something so bold," she says. "No one was expecting them to come with such a big cut in the tax on dividends." Early speculation was that the administration would propose cutting the dividend tax to 20 percent.

But the very boldness of the White House proposal has led others to speculate that Bush is simply staking out ground to begin the stimulus package negotiations. By starting big, the argument goes, any future "compromise" will provide a bigger tax cut in the end.

"That's very often the case," De Rugy says. "When you think about Reagan and the original tax reform act of '86, there was a huge gap between what was initially proposed and what we ended up with."

But Bush's critics have made that claim before, and more often than not, the White House has been successful in getting most, if not all of what it asks for. One need look no further than the last Bush tax-cut plan for proof.

Bush will also have a tougher time rounding up bipartisan support this time around. Bipartisan support has always been aggressively sought by the administration, but some of the Democratic senators who supported Bush's first cut, like Sens. Jean Carnahan of Missouri, Robert Torricelli of New Jersey and Max Cleland of Georgia, are gone. Other Democratic supporters, like Sen. Dianne Feinstein of California and Louisiana's two Democratic senators, have already expressed their displeasure with the president's initial proposal. A spokeswoman for Sen. Max Baucus, D-Mont., said he is still reviewing the president's plan, but that "clearly, he thinks it's too big."

Facing what promised to be a tough reelection fight, Sen. Mary Landrieu, D-La., supported the first Bush tax cut. But with her political future secure for another six years, she is now openly calling for radical changes to the president's plan.

"Unfortunately, the president's package is very short on stimulus," Landrieu said. "The only stimulus I can see in it is actually stimulating some of his special-interest groups that are going to help fund his campaign ... To claim that is a stimulus package is really being much less than genuine."

Landrieu said she would support a "payroll tax holiday" -- a cut championed by many Democrats as an alternative to the Bush proposal -- which she says would provide a more immediate spike to the economy. A cut in the payroll tax -- the tax used to fund Social Security and Medicare -- is aimed at providing relief for all workers, including low-wage earners who may not make enough money to pay federal income taxes. Many Democrats have proposed payroll tax cuts that would be paid for out of general revenues, so that Social Security funding would not be cut.

Landrieu's comments underscore some of the new political realities in Republican-run Washington. On a personal level, Landrieu has survived her election challenge, and is less shy about criticizing a president who remains popular in her home state. But Landrieu was also precisely on message with her call for a reduction in payroll taxes.

While House Democrats presented a united alternative to the Bush stimulus plan, efforts to stay on message in the Senate are sure to be complicated by the fact that at least three Senate Democrats are running against each other for the Democratic Party's presidential nomination. It may well be more, as Sen. Bob Graham, D-Fla., and Christopher Dodd, D-Conn., contemplate their political futures.

Three presidential wannabes -- Sens. John Kerry, D-Mass., John Edwards, D-N.C., and Joe Lieberman, D-Conn. -- sent notice Tuesday that Bush's plan is unacceptable, each touting their own economic alternative. Though he did not vote on the last tax cut -- perhaps worried about being labeled a tax-and-spend liberal -- a more emboldened Kerry said Tuesday that Bush's plan "is just more evidence that he doesn't understand what ails our slumping economy and refuses to do the things that will put Americans back to work. While largely ignoring the needs of the middle class, the president is practicing bad economics and even worse ideological class warfare."

Kerry has put forth an economic plan that also calls for a cut in the payroll tax. Edwards touted his $120 billion stimulus package, which includes an energy tax credit of $500 per family, and provides block grants to states. Lieberman touted his $150 billion proposal, which he says "would give businesses an immediate incentive to invest in new information technology, rev up the burgeoning biotechnology and nanotechnology industries, [and] send a new rebate to the 34 million taxpayers who didn't get one in 2001."

So while the White House begins a full-frontal assault to sell its big-ticket stimulus package, a muddled list of Democratic counterproposals and their ambitious sponsors will all be vying for a little attention as the long debate over tax cuts begins again.