The groom is a doofus, the bride has genuine screwball talent, but there's nothing funny about a dead dog. 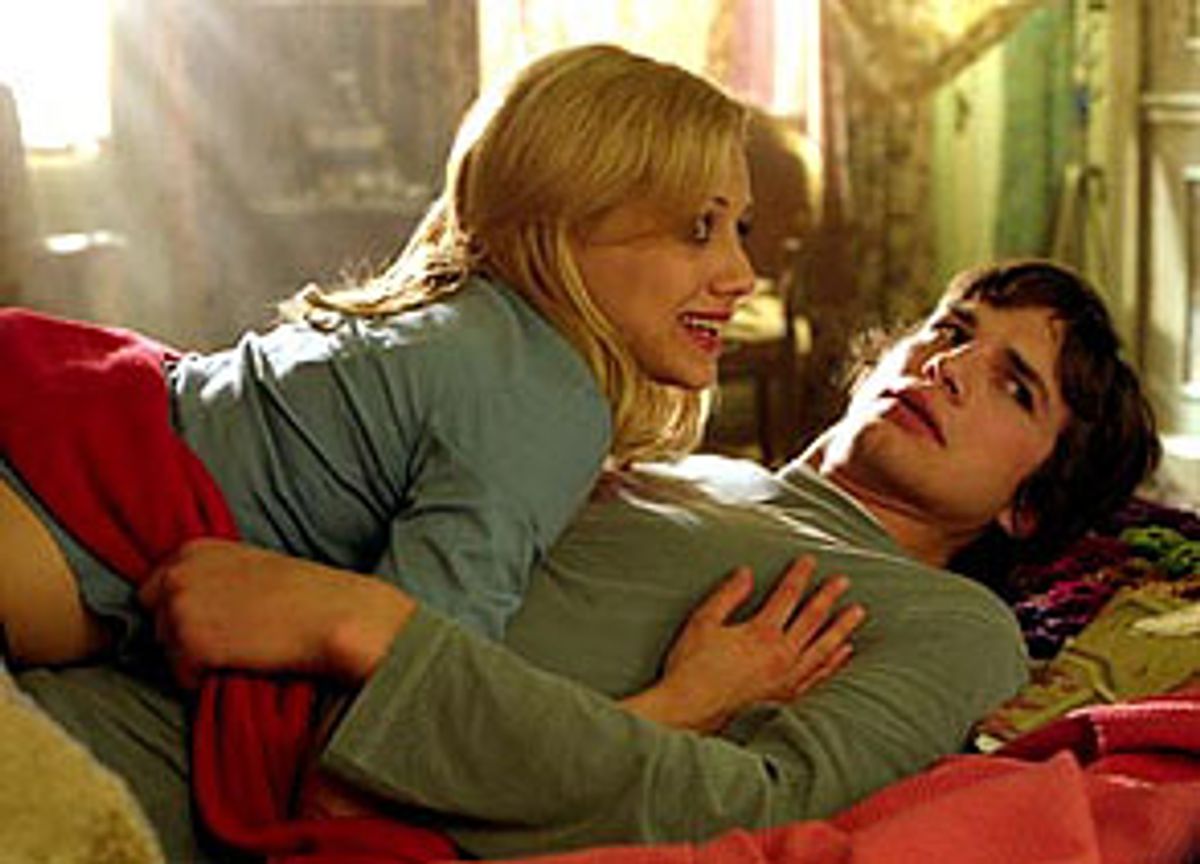 No actress can take a punch like Brittany Murphy. In "Just Married," she gets zonked in the nose at least twice and thumps her head on the edge of a doorway as her young husband, played by Ashton Kutcher, carries her bumptiously over the threshold on their wedding night. Those are decidedly tired, unfunny gags -- and yet Murphy, who understands that slapstick is an art, plays them so brightly that she makes you feel you've never seen them before. When she's accidentally zapped with a football (thrown, of course, by Kutcher), she doesn't pull the old "Oh! My nose!" Marcia Brady routine. Instead she pops back up with a dizzy, radiant smile, as if it were all in a day's work. She's got a knack for playing ditzy lightness with some intelligence behind it. In a Hollywood universe where virtually no one knows how to either direct or play screwball comedy, she's the closest thing to a Carole Lombard that we've got.

It's too bad that the movie around her, Shawn Levy's "Just Married," is so disappointing. Its premise is workable, and its script (by Sam Harper) manages to toss off a few good lines, but it takes a number of awkward running steps at the beginning and then founders irrevocably midway through. Murphy is a rich girl (her parents are David Rasche and Veronica Cartwright, the latter of whom has absolutely nothing to do but does get one of the movie's funniest lines, a gag about her character's ridiculous nickname) who falls for average-joe Kutcher.

The two fall in love immediately after that football incident, move in together shortly thereafter, and decide to marry, much to Murphy's father's dismay. Then they set off on a European honeymoon that drives them further and further apart. Part of the problem is that while Murphy understands certain rules of politeness and good behavior while traveling in a foreign country, Kutcher, a sports-loving dude who has no qualms about wearing a knit cap with an American flag on it, doesn't make many friends on the Continent. Within hours of his arrival, he's blown the wiring in a swanky French resort hotel by trying to plug a cheap vibrator into the wall.

"Just Married" seems potentially promising at the beginning: It starts out at the end of the newlyweds' journey, and we see the warring couple scowling and simmering as they make their way through the airport. The sequence is an echo of the opening of "The Philadelphia Story," in which Cary Grant and Katharine Hepburn go at each other with warrior animosity that's barely playful. No longer united in wedded bliss, they're as separate as can be, and they go at each other physically and psychically, nudging and jostling one another as if each felt the universe was too tiny to hold the both of them.

But by the middle of the movie, the memory of that opening sequence has lost its charge, simply because you wonder what on earth Murphy is doing with a dodo like Kutcher. For one thing, he causes an accident that results in the death of her pet French bulldog. It's played lightly, and for laughs (even though the dog-lover in me still flinched), but the problem is that it's the sort of joke that a doofus like Kutcher's character would find hilarious. (And it doesn't have the looped-out absurdity of, say, the dog-in-a-cast routine in "There's Something About Mary.") One of the movie's central plot points is that he lies to Murphy about how the dog died. But he wasn't all that nice to the poor critter while it was still alive. And who would feel good about marrying Murphy off to a guy like that?

Kutcher (who's best known for his work on "That '70s Show") is good-looking in that now-generic '70s hipster way. (He looks like he's on the verge of getting arrested for impersonating a Stroke.) But he thinks simply acting like a regular guy is the same as playing one -- he doesn't know how to give his character any extra zing, and he hurls his jokes at us like an athletic beach bum engrossed in a killer game of jai alai.

He's leagues behind Murphy, whose half-out-of-it charm also has a peculiar razor sharpness. In "Just Married," there's no doubt about which character, and which actor, has the chops. Murphy, with her runny nose and even runnier mascara, certainly knows how to work her innocent, girly-girl looks. But a football in the nose isn't nearly enough to get her down. She could kick the ass of any guy any day; she deserves a worthy ass to kick.