This stylish Belgian indie convincingly pits a teacher against a teenager, but all the showy camerawork is a pain in the neck. 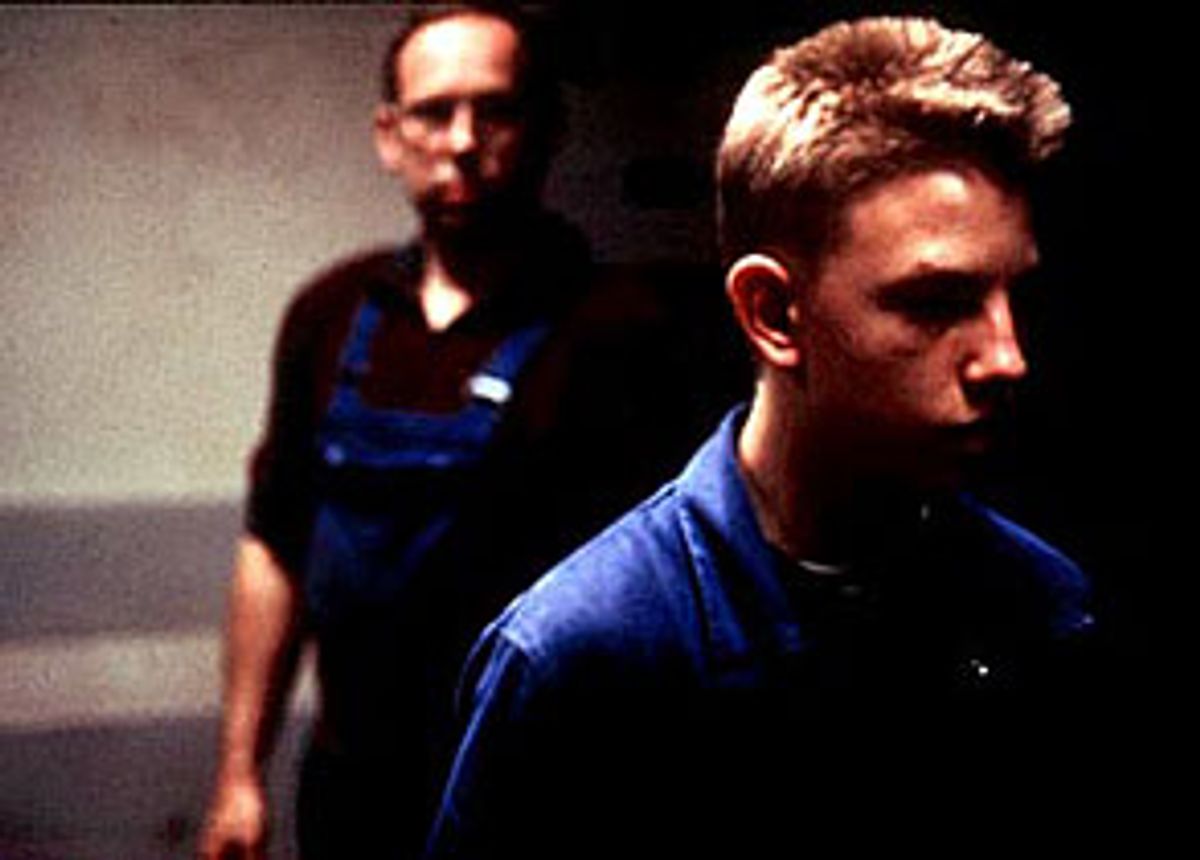 "The Son," the latest movie from the Belgian directing team of Jean-Pierre and Luc Dardenne, is an interesting piece of filmmaking, if interesting is what you're after. In "The Son," the Dardennes ("La Promesse," "Rosetta") are loyal slaves to their technique: Here they're obsessively devoted to sophisticated-primitive camera angles -- most of the time their lens is pointed searchingly, and obtusely, toward the back of the lead actor's neck. The sight of that pale, pudgy nape becomes a symbol of all that we can never know about his character: his desires and motivations, the deepest, most painful secrets of his heart.

But how much we actually care about the back of Olivier Gourmet's neck depends on how much of an emotional investment we're prepared to make in the Dardennes' movie. They meet us only a few steps of the way and turn their backs on us as we stumble earnestly through their spare, barren landscape of a story.

That story's lonely central figure is Olivier (Olivier Gourmet, who has also appeared in "La Promesse" and "Rosetta"), a quiet, reclusive carpentry instructor at a vocational center who becomes distressed when a new pupil, 16-year-old Francis (Morgan Marinne), is placed in his class. We don't know why Francis' presence troubles Olivier so much, and it's a while before we find out; the Dardennes (who also wrote the screenplay) know that the only way to keep us on the hook is to let the mystery unfold slowly. But despite the fact that we see little of Olivier's face -- his eyes, when the Dardennes' camera shows them to us, are unreadable apostrophes behind thick eyeglass lenses -- we do see that Olivier has become somewhat obsessed with Francis. Olivier's ex-wife, Magali (Isabella Soupart), who knows Francis' secret, is shocked and horrified that Olivier would take such an interest in him: She can't read his motives or his feelings; he's even more of a resolutely closed book to her than he is to us.

When we finally learn precisely what the bond between Olivier and Francis is, it's easy enough to understand why Olivier's feelings are so murky and conflicted. The emotional core of "The Son" is sound enough, if you can get to it. The trouble is that the Dardennes demand that we work toward those feelings by suffering through their allegedly daring, innovative technique: The movie's style (all shaky hand-held swoops and claustrophobic close-ups, punctuated by the occasional annoying whine of a random power tool) seems purposely set up as an obstacle course. The truth is that the Dardennes' story might seem too simple, too thin, without it; the tale needs all the extra weight it can get.

You don't need to work hard to figure out the effect the Dardennes and their cinematographer Alain Marcoen are after: The camera's movement is an accessory to, if not a metaphor for, Olivier's isolation, a way of mirroring the sense of disquiet that buzzes around him relentlessly. The style suits the story perfectly, and yet stubbornly refuses to serve it. From looking at those miles of wobbly footage of the back of Olivier's head, we learn just how much we can never know about Olivier. But more than that, we learn just how far the Dardennes will go to make their point, over and over again.

Past a certain degree, unknowability is just plain boring. But even though Gourmet's performance is deliberately opaque, it's not dismissable. Actors act with their bodies, not just with their faces, and it's a testament to Gourmet that he tells us as much about Olivier as he does, considering that he's repeatedly shot from the most oblique angles. Most telling is the weirdly self-assured wobble of Olivier's walk. The movie suggests strongly that he's a timid guy, perhaps not terrifically successful with women. And yet he moves with an almost feral confidence, like a normally shy house cat who turns into a jungle creature when he doesn't know he's being watched.

Marinne, as Francis, is a cloudier case. His character's feelings are supposed to be almost as thickly veiled as Olivier's (the two characters were clearly written as awkward mirror images of each other), but Marinne doesn't have enough skill to make such a subtle parallel work. We know that Francis has feelings. He's too zonked-out to be confused in the typical teenager way (at one point he makes a reference to the medication he's taking to help him sleep), but we can see that he's nevertheless weighed down by nameless, oppressive troubles. Even so, Marinne doesn't let us deeply enough into the character to figure out what's going on with him. We're left squarely outside his head, which was probably the Dardennes' intent; still, you can't escape the feeling that, simply out of carelessness, they've hung a young actor out to dry.

Whatever allure "The Son" has lies in its very remoteness, in its resolute refusal to show us all but the most delicate emotional vibrations. It also moves very sluggishly, which gives us plenty of time to make sure we're catching on to its alleged multiple layers of depth and meaning. We're then given more time to check and double-check our responses. And yet at the movie's abrupt end, we're left wondering if we really, really got it. That's not such a bad thing -- conclusions are almost always better when they're not tidy -- but we're also left wondering if it was all worth the time and effort. Sometimes a movie can give you too much time to think.