Her aim is true

Despite 20 million records sold, Alison Moyet might be the planet's least famous pop star. Now she's back with a smoldering, bluesy new album -- why hasn't anybody noticed? 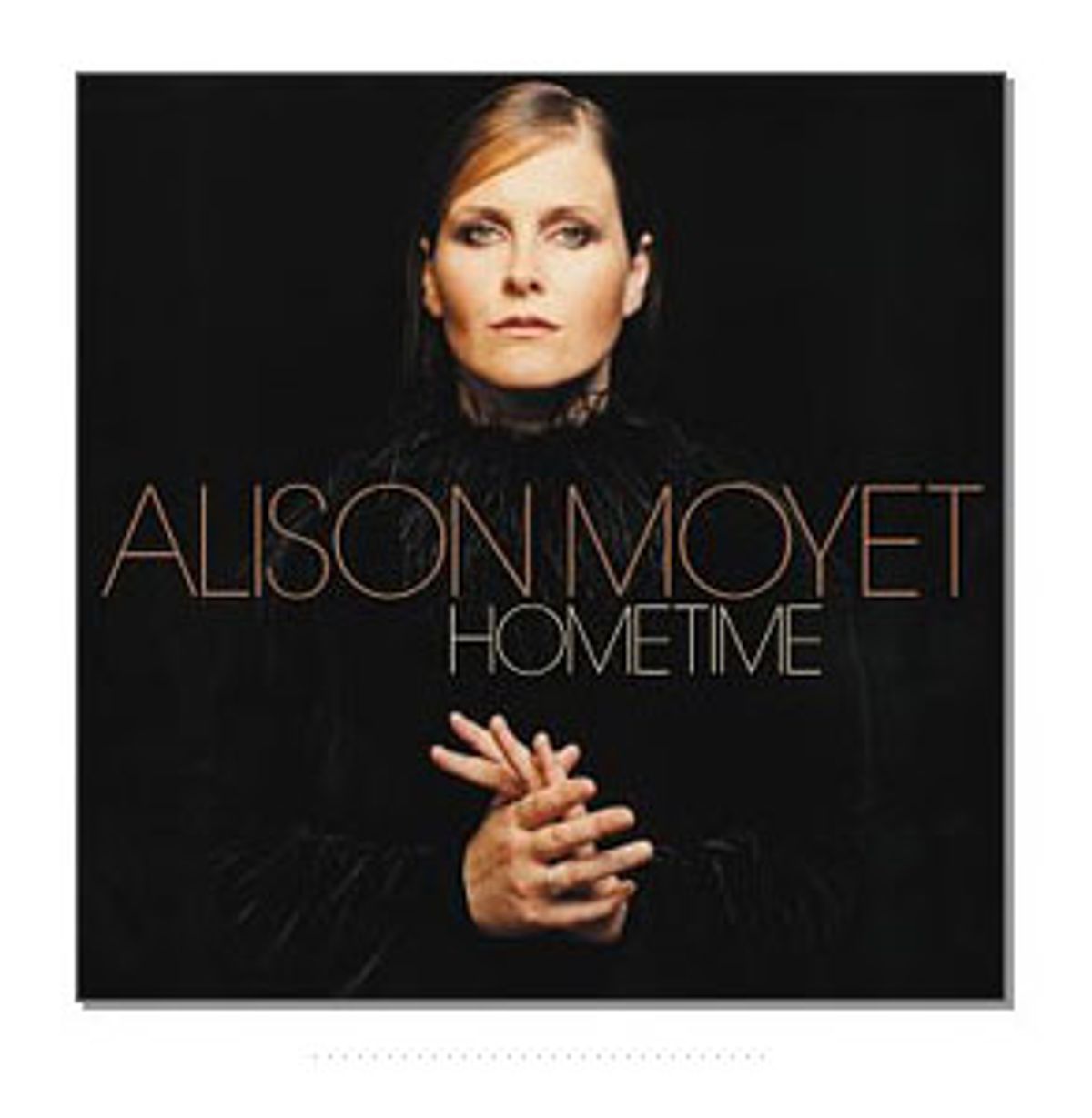 Even if you remember Alison Moyet from her days as the androgynous voice of Yaz (or, in the United Kingdom, Yazoo), it's unlikely that you would know that last fall she released "Hometime," her first new recording in nearly a decade. The music industry has changed just the past half-decade, and it has never been fond of artists who choose to take a leave of absence. But for Moyet, the problems may go deeper. Even with tens of millions in worldwide sales, in the United States her voice has always been recognizable but not necessarily identifiable. Some listeners were probably never sure whether she was a woman or a man, and her most popular recordings with Vince Clarke (as the duo Yaz) remain songs that are remembered instantly only if they are actually played. Few people in the U.S. remember the title "Only You," even if at some point they've all sung along.

Clarke, (a founding member of Depeche Mode prior to his Yaz stint) left after two albums for Erasure, another duo whose male singer seemed intent on mimicking Moyet's throaty, melodramatic delivery. Moyet followed with a string of solo discs, each with a memorable track or two, but mostly they were marred by a string of producers who pushed her toward histrionic power ballads. By the early '90s, Moyet had managed enough sales to experiment a little with "Hoodoo," which earned a surprise Grammy nomination and a memorable U.S. club tour in which she stripped down to acoustic arrangements, showed off a talent for harmonica, and tossed in a few unexpected covers of Jacques Brel. At a show in New York, she closed with a playful, flirtatious cover retitled "I Love My Label and My Label Loves Me."

But the love between Moyet and Sony didn't last long. After a lackluster showing for 1994's "Essex," Moyet retreated to her English country house, emerging for occasional guest vocals on tracks by Tricky and the Lightning Seeds. Her subsequent "Singles" collection was a hit abroad, but not enough for Sony to look up from its books when she came out of the house to record again in 1999. Like Aimee Mann, Joan Osborne and a number of other mostly female artists, Moyet found herself in a professional limbo, unable to extract her recordings from a company that no longer wanted to release them. Even with a track record of 20 million records sold, it took her three years to land a new deal.

Moyet has never denied that the long gestation period was partially her own fault, the result of professional laziness and, perhaps more seriously, a bout with agoraphobia. All of which makes "Hometime," now out on the Sanctuary label, that much more astonishing, and the silence it seems bound to meet that much more irritating. If this were her debut, or if she were blond or a teenager or black -- if she just weren't middle-aged, and rather large and "handsome" -- this would be one of those records that everyone talks about. She'd be India.Arie. She'd be Angie Stone. She'd be Norah Jones. Even if she remains none of those things, people should still be talking about it.

Nearly everything on "Hometime" works, beginning with the funky trip-hop-laced production, courtesy of the Insects. Using spare rhythm tracks with loopy acoustic touches (the harpsichord appears on several tracks), they create something akin to real music, rather than the homogenized synthetics clouding the air these days. Both the production and the songs -- most co-written by Moyet -- unfold slowly, revealing their hooks a third or even halfway through. The album doesn't grab you immediately; like all great narcotics, it requires that you inhale a few times before you become addicted.

As a lyricist, Moyet has always playfully recognized the essential passive-aggressive qualities that lie dormant in most love songs. On "Should I Feel That It's Over," she chastises an emotionally distant partner to a gloriously upbeat melody. "And you call this kissing?" she asks at one point. "I feel closer to the sky." The classically styled torch song "If You Don't Come Back to Me" offers a wish list full of reasons why being dumped suits her fine: "If you don't come back to me, you'll have saved me goodbyes, my escape will be neat."

But it's the slow-simmering R&B that makes "Hometime" truly infectious. The title track itself comes off as a collaboration between Billie Holiday and Massive Attack, with Moyet's phrasing rivaling that on "Strange Fruit" as she sings "Oh, how I long to see a friend of mine/ Somewhere he's waiting for me" in an ode to being housebound. "Ski" exemplifies the deceptive heights she is capable of climbing, beginning as a trifle and building to a gospel-flavored meltdown.

"The Train I Ride" percolates on a Sly and the Family Stone groove while Moyet shares what might be commentary on her career: "I've got a ticket and it's going to take a while going slow." Carlton McCarthy contributes two new tunes: "Say It," which seems a companion to the Yaz classic "Midnight," and the flabbergasting "Do You Ever Wonder?" which begins with expertly phrased bursts of falsetto patter before breaking into a chorus worthy of Al Green.

Most of all, Moyet seems finally to have learned that having a powerful voice doesn't mean having to always use it -- though it is fun to imagine her blowing those pesky American Idols off the stage, something you can imagine she could do quite literally.