NARAL by any other name

The reproductive rights movement's shift in emphasis from "abortion" to "choice" is a shrewd marketing move, says a top branding expert. 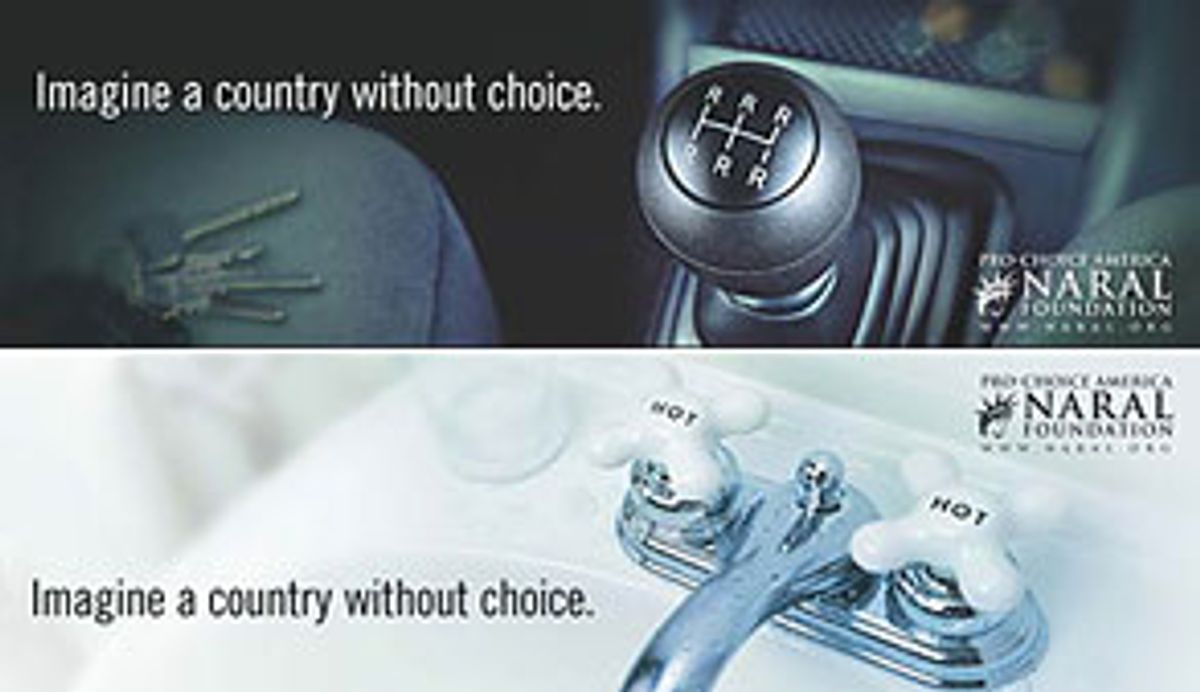 This month, the National Abortion and Reproductive Rights Action League (NARAL) announced a multimillion-dollar campaign to punch up its image and launch a new line of defense against the Bush administration's back-door assault on reproductive rights.

NARAL Pro-Choice America, as it's now called, is repositioning itself to send a broader and more centrist message. "The essence of America is the right to determine the course of one's own life, to make one's own choices and shape one's own destiny," NARAL announced the day of its name change. Any resemblance to the Declaration of Independence or the preamble to the Constitution is probably not coincidental.

But how much of a difference will this name-change make? Salon asked Al Ries, who has written more than 40 books on marketing, including "The 22 Immutable Laws of Branding" and "Positioning: The Battle for Your Mind." Speaking from his office at Ries and Ries in Roswell, Ga., the marketing guru talked about NARAL's strategy, the significance of labeling the battle, and what he would say if Adolf Hitler asked him for public relations advice.

How significant are decisions like choosing a name in the political arena?

I think it's pretty clear that branding can be an effective weapon to position an organization. Look at Amnesty International and Greenpeace and other brands that have been built in this age. PETA's another one that has done a perfect job.

What about the name "NARAL"?

That's a problem. Nobody's ever going to know what that name means.

What do you think about the change to "NARAL Pro-Choice America"?

The "pro-choice" part will be established, and when people hear that name they'll talk about the pro-choice group. They'll just drop "NARAL." Acronyms, oddly enough, can become brand names. The Internal Revenue Service is typically known as the IRS, and the Federal Bureau of Investigation as the FBI, but normally people have to know what NARAL stands for before they can ever remember the initials. So when they see that name now, they'll just call it "the pro-choice organization."

What about switching the emphasis from abortion to choice? Do you think that's effective?

I think that's brilliant. Who can argue with it? Because you want to present the message in as positive a manner as possible. You don't want to be against something, you want to be for something. Who wants to be against choice? On the opposite side of the street, look at what the anti-abortionists call themselves: pro-life. No one wants to be against life. The same thing happened, incidentally, in terms of the estate taxes. They've changed that name to death taxes. People say, "Gee whiz, you're charging me for dying? How can you fine me for dying?"

By using the right name, it makes it much easier to get acceptance for your idea or concept.

Ken Connor, president of the Family Research Council, was recently quoted in the New York Times as saying, "They want to talk about pro-choice, but it's not choosing between chocolate and vanilla. We are talking about the right to kill an unborn child." What kind of strategic move is he making?

Again, he's twisting the argument from a word like "choice" to a word like "killing." Obviously, the abortion movement is not pro-killing. It has to do with the definition of the word "killing." And again, the opposition is doing what most oppositions do -- it's exaggerating the issue. The proper response is to say that the pro-choice movement is not about killing, but about giving the mother the right to terminate a pregnancy.

Both sides tend to exaggerate the issue. The pro-choice movement has done a good job of changing the rhetoric. It's easy to be against abortion; it's harder to be against choice.

If NARAL asked for your help, what advice would you offer?

I'd start with the name "NARAL"; I think that's a loser. They should call themselves PCA or something. If you're going to use initials, take the words you own, like "pro-choice" and add a word -- "association" or "organization," something. "NARAL" is just a disaster; no one is ever going to remember that name.

Also, you want to keep a name as short and simple and as easy to understand as possible. They have a good flag: People simply can't argue about choice. There are analogies with other campaigns -- for example, with drugs. "Why should the government be deciding what's bad for me? As long as I'm not hurting anyone else, why should the government decide what I should do?" There are too many issues where do-gooders force their ideas of what's good on the population.

What other advice would you offer?

I think the organization has done a good job with defining and hammering away at the issue. The next question they have to ask is, how do we execute this? Do we have rallies? Do we have marches on Washington? The strategy is sound, but you can't just have strategy, because how are you going to get the ideas in the mind? Bland statements like "We're going to educate somebody" don't work.

The most important thing is to focus on one or two big things, as opposed to a lot of little things. And I'll tell you something else: The specific almost always works better than the general does.

For example, let's say you're working on women and women's rights. We can have a big organization and a big pamphlet and now we're going to go out and educate American citizens on being equal and all these wonderful things. But look what happened when one smart public relations-oriented woman struck a blow -- a narrow one -- against [the all-male] Augusta [National Golf Club, which hosts the Masters]. That generated more publicity and more action than a broad general program. It's amazing. Because of its high visibility, and because many prominent CEOs are members of Augusta, a lot of people are in the hot spot about this issue. [Chuckles.]

Most successful programs of this sort come up with some simple, tangible idea on the execution.

In the same sense, I think the pro-choice people could dramatize their case better by taking case histories of individuals who didn't have abortions, which caused intense misery and suffering for themselves, their families and their offspring in their lifetime.

How effective are the NARAL billboard ads? One features a gearshift, the other hot- and cold-water spouts -- both with the words "Imagine a country without choice."

In the first place, I don't see any role for advertising here; I see a role for P.R. Advertising has no credibility. Just because you say something in an ad doesn't mean it's so. Merrill Lynch gets in trouble and runs a 12-page ad in the New York Times saying, "Hey, we're wonderful," but do you believe it? Do people believe the ads, or do they believe the news stories? They believe the news stories. In this case, I would not focus on ads at all. I'd focus all the attention on P.R. and horror stories. Believe me, there are a lot of lives not worth living.

What advice would you offer the pro-life groups?

I wouldn't work on the other side of the issue because I don't believe in it. As a professional communicator, you can't get excited about communicating issues you don't believe in. I mean, if Adolf Hitler asked me to help him out with the Nazi party, then I'd have to say, "No thanks, Adolf, do it yourself."