A bachelor-party indiscretion with Julia Stiles leads to panties in the toilet tank -- but certainly no laughs. 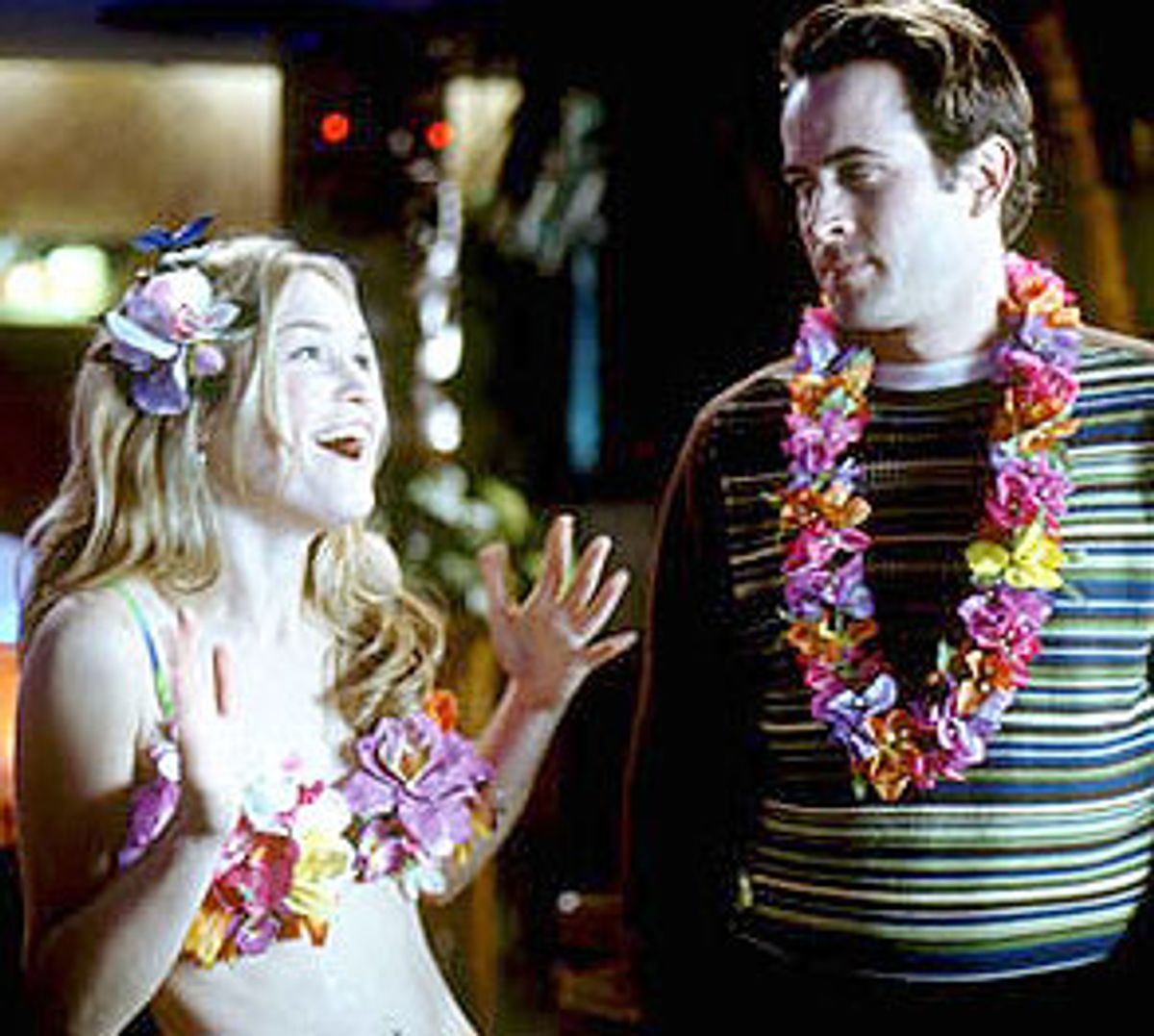 Humor is subjective. But not that subjective. Even the mediocre comedies coming out of Hollywood these days string us along from laugh to laugh, so we generally leave the theater thinking we've had a better time than we actually have.

But not Chris Koch's "A Guy Thing." I've heard people wax poetic about "Snow Day," Koch's last movie, as the worst movie ever made, but there's no way it even comes close to earning that honor. It may have been clumsily directed, but it was immediately forgettable at worst and vaguely pleasant at best (and it did feature Iggy Pop as an ice-rink DJ -- always a plus in my book).

"A Guy Thing" may seem, on the surface, like a better movie: It has a more professional sheen, and its actors are such pros that they occasionally come close to making you forget how bad the script (by Glenn Glienna) is. But "A Guy Thing" stumbles along laboriously, its jokes following one after another in a sloppy, flat-footed walk. Jason Lee is Paul, an eminently decent guy who's engaged to the perkily conventional but likable Karen (Selma Blair). Paul is the kind of guy who wants to do everything right, and so he makes every effort to behave well at his bachelor party, a rowdy affair held at one of those faux Polynesian watering holes.

But somehow -- he can't remember exactly how it happened -- he wakes up in bed the next morning with one of the bar's "Tiki Girls," Becky (Julia Stiles). The movie's complications loom up one by one as Paul struggles to keep Karen from finding out about his "indiscretion" -- and preserving the secret is crucial, particularly since it turns out that Becky is Karen's cousin.

Paul's shenanigans involve hiding a pair of panties in his toilet tank, tossing some incriminating PG-rated snapshots into a dumpster so that the son of his neighbor (a minister, played with a sly and funny sense of menace by Larry Miller) ends up finding them, and being shot at by his gun-enthusiast father-in-law (James Brolin) as Paul tries to scramble into his fiancée's family's bathroom window.

Any of those things, as lame as they might look on paper, could have been funny if they had been filmed with the right sense of style and timing. But very few of the gags in "A Guy Thing" work, and it doesn't seem to be the fault of the young actors. Lee and Stiles have the potential to be great romantic-comedy leads: Their timing is good (the problem is that it sometimes tugs against the movie's weird sluggish beats), and they know how to bounce even the oddest lines off one another in a volley of non sequiturs.

Lee is the kind of actor who has done terrific work in supporting roles (as in "Chasing Amy" and "Almost Famous") but whom no one quite thinks of as a leading actor. It's a shame, because there always seems to be a sly intelligence at work in his performances; he could easily carry the right kind of movie. And Stiles, whose face shows both kittenish softness and leonine fierceness (she can shift from one to another in a single take), should do more comedy: She has a go-for-broke looseness that makes her seem funny even when her lines aren't.

Blair is also a terrific comedic actress -- she's one of those performers who makes it clear she's nobody's fool -- but the material here lets her down. Julie Hagerty, as Ben's mother, is similarly wasted -- she barely gets a chance to show off her lovely screwball ditziness. The guy who gets the funniest lines is, perhaps not surprisingly, the almost always funny Larry Miller, the minister who ends up officiating at Karen and Paul's nuptials. He's seen firsthand some of Paul's zanier schemes to cover up his little mistake, and so when Karen and Paul finally make it to the altar, right after the part where he asks if there's anyone out there who thinks these two should not be joined in matrimony, he looks around the room, waits a beat, and says expectantly, "We're just going to give you another few minutes to think about that ...."

Whatever faults "A Guy Thing" has, though, it does deserve credit for one thing (and what follows is a minor spoiler, particularly if you haven't seen a romantic comedy in the past 10 years or so): There have been quite a few recent romantic comedies in which one of the parties is left at the altar by a mate who has had a sudden change of heart. There's nothing wrong with that convention, but it can turn a movie sour if the jilted party is simply left in the lurch, with no potential happiness on the horizon. "A Guy Thing" sews up that problem in its very first scene, showing that Koch and Glienna thought ahead -- that's more than you can say about the other writers and directors of so many other romantic comedies out there. "A Guy Thing" is just the latest example of good intentions resulting in a failed mission. Someday soon, maybe, we'll actually get a romantic comedy whose good intentions amount to something. But right now that seems more elusive than true love itself.