In frigid conditions, thousands -- from 30,000 to 200,000, depending on the source -- show up in Washington, and Middle America outnumbers the radical fringe. 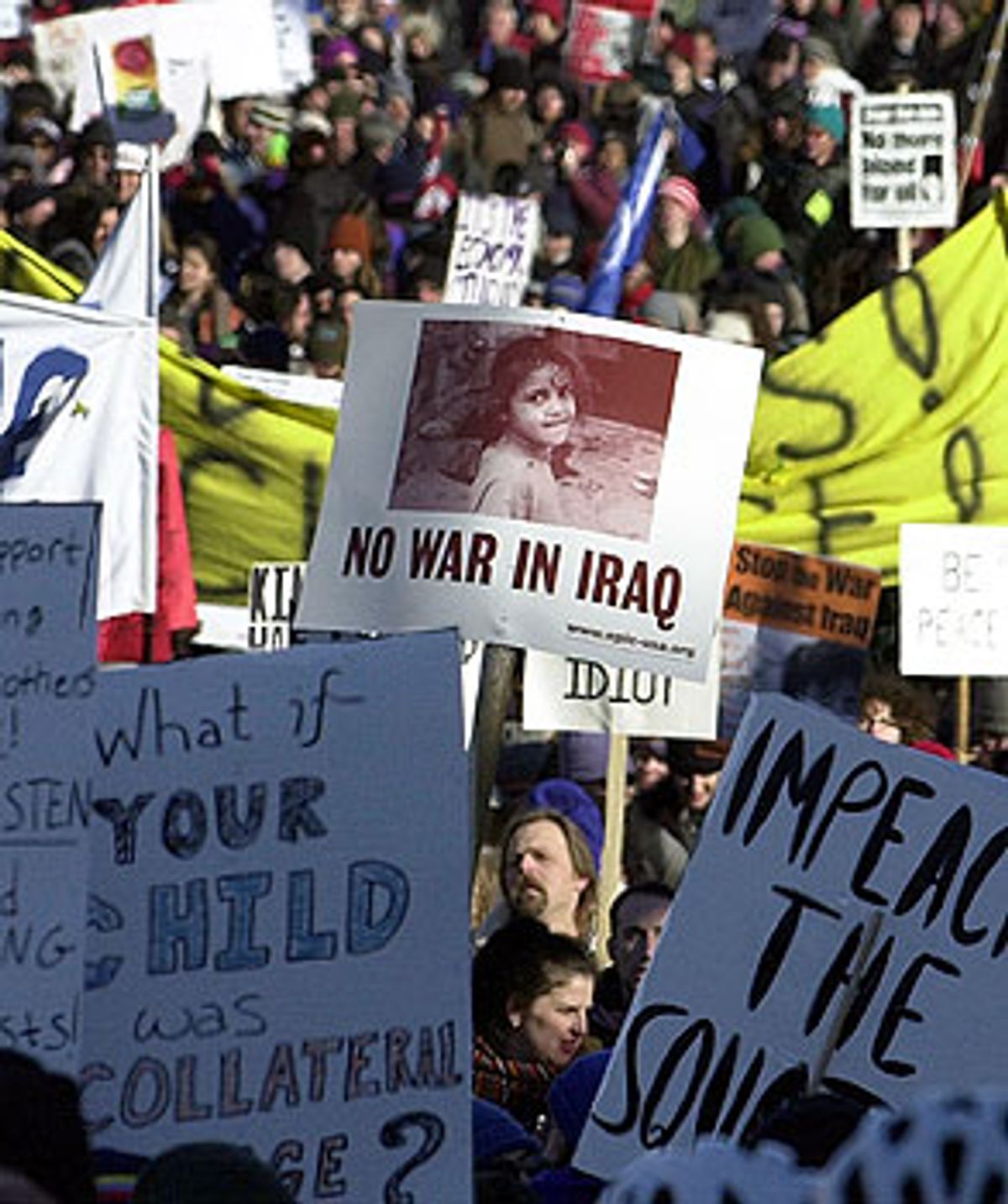 American flags outnumbered Palestinian and Iraqi ones at Saturday's antiwar march in Washington. Though the enormous protest was called by ANSWER, a front group for the Stalinist Workers World Party, the National Mall next to the Capitol building was flooded by ordinary, outraged citizens. They completely overwhelmed the Spartacus Leaguers, the Maoists and other assorted wackos who turn out to support anything opposed to the U.S. government.

Sure, there were still plenty of signs featuring George Bush with a Hitler mustache or declaring "CIA = Al-Qaida," but they were more than matched with placards saying, "Peace Is Patriotic" and "Don't Assume I Support Hussein." There was a far larger Jewish presence than during the last march on Oct. 26, which was also organized by ANSWER, and fewer whispers about Zionist plots (though one New York Jewish man, himself wearing a Bush-as-Hitler pin, complained about the "We Are All Palestinians" T-shirts, saying, "How about 'We are all Palestinians and Jews'?").

There were more black people -- perhaps reflecting the increased focus on how an inordinate number of minorities will fight in a war and the emergence of the antiwar group Black Voices for Peace -- with some holding signs saying, "Blacks Refuse to Be Cannon Fodder." GLAMericans for Peace, a group of stylish urbanites, shattered the stereotype of protesters as hemp-clad hippies (one carried a fashionable fringe-bedecked sign announcing "Peace Is Not a Fringe Movement"). There were even dorky middle-class white men holding a sign featuring cartoon versions of themselves that read: "Mainstream White Guys for Peace."

The broad-based antiwar movement many have awaited is here.

With the D.C. police not making estimates, it's nearly impossible to figure out how many marched through the bitter cold on Saturday. Organizers put the number at a half-million, and then later settled for 200,000. The Capitol Police estimated the march, as opposed to the larger rally that preceded it, as between 30,000 to 50,000. Most others hedged with a safe "tens of thousands." All one can really say with certainty was that there were a hell of lot of angry people out there, and that from the ground it looked a lot bigger than the Oct. 26 demonstration, which D.C. police suggested at the time surely topped 100,000 protesters. (The D.C. police seem to concede Saturday's was bigger, but refuse to give estimates.)

That was in addition to large protests in San Francisco and Portland, Ore. (where the police reported at least 20,000), and smaller demonstrations around the country. Worldwide, protests in Tokyo, Paris, Moscow, Cairo, Bologna and Goteborg, Sweden, each drew thousands. In D.C., protesters chattered excitedly as numbers rolled in via cellphone from marches abroad. Meanwhile, journalists speaking a half-dozen languages threaded through the crowd, sending home news of American opposition.

It shouldn't be forgotten that these protests are almost certainly being aired in Iraq, and, despite the protestors claims of solidarity with the Iraqi people, are probably causing a great deal of unhappiness there. All available evidence suggests that Iraqis long to be freed from Saddam by almost any means necessary. In December, the International Crisis Group, a multinational think tank, released a report based on covert interviews conducted with Iraqis throughout Iraq, that concluded, "A significant number" of Iraqis were prepared to support an American-led attack. This view is shared by Iraqis in exile. A few months ago, Mohammed Al-Moussawi, a 34-year-old security guard in Toronto who grew up in Basra, in Southern Iraq, told Salon about how demoralized he felt watching people protest the Gulf War on Iraqi TV. "I'm a 100 percent sure you will see on Iraq's national TV images of these war protests, trying to give Iraqis the impression that the whole world is against this war. It happened in 1991 with all these protests in Europe and elsewhere in the world. It serves Saddam's purposes. Iraqis really hope the Americans will come, get the nation rid of him and establish a democratic government."

Yet it's not just an impression that much of the world is against the war -- there's a widespread feeling abroad and in pockets of America that an Iraq war might unleash horrific violence far beyond Iraq's borders. That's why people in dozens of countries besides Iraq, as well as dissenters throughout America, will likely be cheered by Saturday's success.

The fact that the American media reported on it to a great extent signals a shift in the debate about Iraq. October's rally was virtually ignored in many outlets. After running a brief story that reported how "[f]ewer people attended than organizers had said they hoped for," the New York Times seemed to try to rectify the error with a follow-up piece a few days later about the burgeoning antiwar movement.

Saturday's rally, meanwhile, made the network news and CNN Saturday night and the front page of Sunday's Times.

This sudden interest in the peace movement suggests that the reverence journalists accorded Bush after 9/11 might be dissipating just a bit as the president's poll numbers recede to pre-9/11 levels, and his campaign against Saddam appears increasingly inconsistent as North Korea, another point on the "axis of evil," gleefully thumbs its nose at Washington. Suddenly, dissent is newsworthy. The protesters' P.R. victory was only slightly dimmed by the condescending question CNN posed to its call-in viewers, "Are the antiwar demonstrators unpatriotic?" Happily, most said no, and one even called in to express outrage that the network had even asked.

Reaction on the ground was similarly positive. "It's been going on for hours. I think it's fabulous," said Eileen Nolan, a middle-aged redhead watching the proceedings from her stoop at Sixth and Pennsylvania streets. "I think it has to make a difference. I have real admiration for people willing to travel all these miles for what they believe in."

Despite the historic and symbolic weight of protesting in D.C., the city is usually a singularly bad place to have a demonstration. The October action was so far away from pedestrian neighborhoods and even tourist routes that much of the city was oblivious to it. On Saturday, though, after hours of bombastic speechifying, the protesters marched two miles to the Washington Navy Yard, through yuppie Eastern Market and past the Marine barracks on 8th street. The anarchists with black bandannas tied around their faces behaved like boy scouts, even when going by a hated Starbucks franchise. In return, they were greeted with waves and cheers by spectators.

A group of children in a playground near the Navy Yard delighted marchers by taking up their chant, "1, 2, 3, 4, we don't want your dirty war! 5, 6, 7, 8, we will not cooperate!" Amazed at their power to make the crowd cheer, they yelled louder and louder, jumping around and laughing.

Until the march began, the protest had seemed like a rather dull affair. While making room for celebrities like Jessica Lange, Jesse Jackson and Al Sharpton, ANSWER tends to load up its speakers slots with turgid ideologues who trot out the group's grab bag of lefty obsessions -- Native American Rights, Ariel Sharon's barbarism and vague references to American aggression against "Korea" (North or South? You decide). Tikkun, the leftist Jewish group led by San Francisco Rabbi Michael Lerner, asked to be given 15 minutes to put forward a more nuanced analysis than what they called ANSWER's "knee-jerk anti-imperialism" and anti-Zionism, one that would at least acknowledge Saddam's butchery. It was turned down.

So once again, there wasn't even a nod to the fact that the suffering of the Iraqi people isn't caused solely by American sanctions. Instead, Workers World spokesman Brian Becker demanded that America be disarmed, an Imam led the crowd in chants of Allahu Akbar (God is great), and a woman from Pennsylvania took the stage to speak up for homeless people who are against the war. Even Patti Smith, who has somehow mutated from a fierce New York punk into a folk-singing earth mother, failed to liven things up much, giving a fairly perfunctory rendition of her "People Have the Power," the protest song she seems to perform at all these events.

Activists are increasingly grumbling about the Workers World apparatchiks behind ANSWER, who have thus far dominated the antiwar movement by buying up protest permits before other groups have had a chance. The group's values are diametrically opposed to the vast majority of people who oppose the war -- Workers World supported the Chinese government's massacre of "bourgeois, pro-imperialist" protesters in Tiananmen Square and celebrates such beacons of resistance as Saddam Hussein, Slobodan Milosevic and Kim Jong Il. That's why when Mobilize New York, an e-mail list for New York City activists, sent out a protest alert, it linked not to the ANSWER home page but to the parody site International A.O.W.C.U.T.G.D.F.P., or Authoritarian Opportunists Who Cozy Up to Genocidal Dictators -- for Peace.

Happily, once the rally was done and the people took to the streets, ANSWER's rhetoric was drowned out by those with genuine concern for human rights.

McCarron fought in the Gulf War and in Operation Provide Comfort, which protected the Kurds after the war's end. He was proud to do so -- "morale was high. We believed in our mission." McCarron's under no illusions about Saddam's evil, but he also believes that George Bush is out of control and that his obsession with Iraq has little to do with America's interests. "This is clearly a one-man war," he said. "It's a real insult to be told that our views are unpatriotic by people who did everything they could to avoid military service."

That was the dominant view not just among the protesters but among the bystanders. In Mickey's Patio, a bar on 8th Street, patrons flashed peace signs as the crowd surged by. They said they'd been watching the march for over two hours, and from the street, there was no end in sight. Louis Clark, a general contractor drinking a Samuel Adams, had seen the demonstration on TV and come to the bar to watch it in person. "I didn't know it was that big," he said of the peace movement. "There's just more people and more people. I hope it will get through to the president."

That hope is what drew so many out, including many Middle Americans who'd never done anything like it before. "I only know one person who is pro this war, but from everything I've been hearing in the media, it's like there's no dissent," said Laurie Broome, a neophyte protester and high school Spanish teacher from Rice Lake, Wis. There, her fear of the war is visceral. "I see them come into my high school to recruit kids who don't have enough to go to college," she said. "Two years ago, a huge group of students signed up. Back then it didn't seem remotely possible that they'd have to go to war."

Now it's imminent, though Broome held out a hope -- probably a naive one -- that Bush would take note of the opposition that had traveled through the country to bring itself to his doorstep. "This has got to make the administration stop and think," she said. "For every one person that's here, there's at least a hundred who wish they could be."