Chemical weapons, civil war and Arab rage could turn an invasion into a disaster. 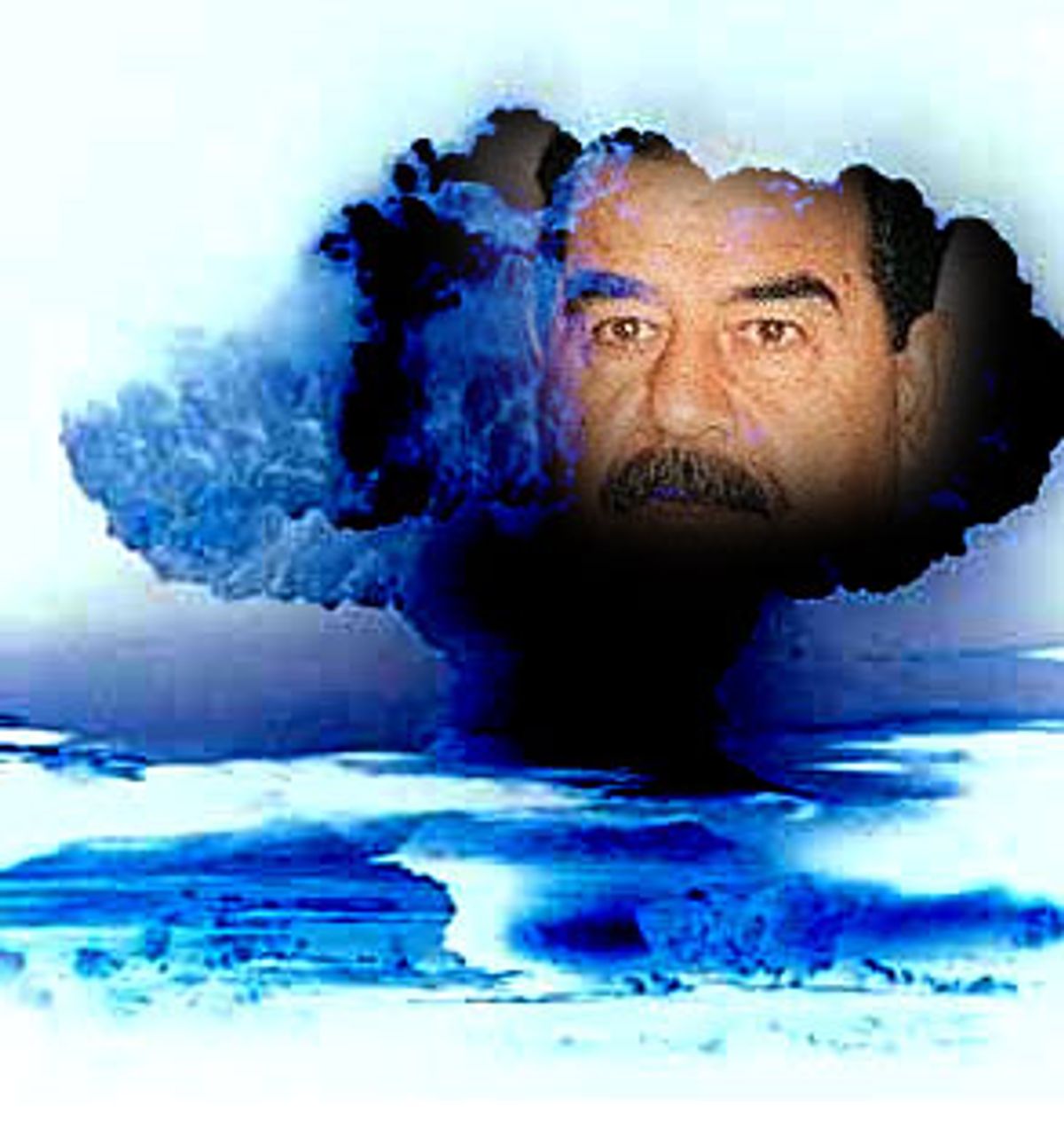 They are scenes of chaos from a paranoid's nightmare: The U.S. and its allies attack Iraq and the country splinters into warring factions, trapping the invaders in a quagmire. Hordes of refugees flee from the carnage, toward closed and militarized borders. Rulers in neighboring nations face mass unrest. Al-Qaida feeds off runaway anti-Western sentiment in the region and mounts new terrorist attacks. When it seems that things cannot get worse, perhaps Saddam launches a chemical or biological attack. Perhaps the U.S. goes nuclear.

We are drawn to worst-case scenarios, even as we know we should not trust them. In this case, however, the visions are sufficiently plausible that even sober, experienced analysts are discussing them openly. On paper, the pending war with Iraq looks like a walk -- certainly, that's how hawks in the Bush administration see it. Since the last battle with Iraq, Saddam's arsenal has shrunk while U.S. forces have expanded tenfold. But the goal is different this time, and the stakes for Saddam and others in the conflict are life and death. For those reasons, the experts cannot dismiss out of hand the doomsday scenarios where war spins out of control on several fronts, even if most people don't want to ponder them.

In 1991, everything was different. The U.S. was committed only to driving Saddam's forces out of Kuwait. Thirty Arab nations signed off on the deal; though it still seems improbable, troops from Syria fought alongside American soldiers. But this time the U.S. is committed not only to ousting a sitting dictator from power but also to occupying a vast Persian Gulf nation for months, if not years, despite potentially furious opposition across the Arab world.

The unknowns are many. By far the biggest is what happens if Saddam really is the madman the Pentagon has painted him to be, and whether, as he watches his forces get pulverized by U.S. troops pounding their way toward Baghdad, he decides to unleash a chemical or biological attack on American forces.

"He's going to use every last drop he's got because he can't take them with him," says John Pike, director of GlobalSecurity.org, a nonprofit defense policy group based in Alexandria, Va. "Saddam wants his own chapter in the history books."

Odds are slim that his chemical or biological attacks, riding on the back of Iraq's rickety arsenal, would penetrate the U.S. or Israeli air defense and find their targets. But if they did, the loss of life could be massive.

"What would the U.S. response be if in half a day we lost 10,000 men" to a biological weapons attack? asks John Voll, a professor of Islamic history at Georgetown University. "I suspect our military aircraft have tactical nuclear weapons capability, and we'd use them. The target would be Iraqi forces, 2 or 3 thousand in a lump sum, standing between U.S. troops and Baghdad. The strikes would perform the function of carpet bombing with napalm."

Defense analyst Pike agrees that the nuclear option, while clearly on the fringe of possibilities, cannot be ruled out. He suggests that war planners "probably have a number in their heads [of mass casualties] before we'd use nukes."

In December, the White House made clear that it had not ruled out using nuclear weapons if Saddam struck first with a weapon of mass destruction. "Bush is much closer to provoking a situation in which nuclear weapons are actually used than [Cold War era president] Ronald Reagan ever was," says Pike.

Even without a catastrophic battlefield exchange, the United States' troubles might not begin until after it defeats Saddam. As is becoming increasingly clear, the U.S. military is preparing to establish an open-ended "occupation" of Iraq, as it did in Japan and Germany after World War II, with exiled Iraqi opposition groups no longer in line to set up democratic governments inside the country anytime soon.

Administration hawks insist that's OK because U.S. troops will be met by cheering Baghdad throngs grateful to be liberated from Saddam's clutches. But, says Voll, that rosy scenario has a grim flip side: A long-running, intifada-type rebellion erupts in cities across Iraq, and the United States and its allies are forced to control the angry local masses, much as Israel has to do in the West Bank. And instead of monitoring 2 million or 3 million Palestinians confined to a small region, the U.S. would be overseeing tens of millions of potential Iraqi radicals spread throughout that country.

At the same time inside Iraq, three distinct groups (Shiites, Sunnis and Kurds) who have been living in an uneasy truce under Saddam's dictatorial rule may try to break away from Iraq in the wake of his demise, adding to more chaos for the United States. It was precisely that fear of permanently fracturing Iraq that stopped the administration of Bush's father from sending U.S. troops to topple Saddam at the end of the Gulf War.

Shiite Muslims make up the majority inside Iraq, yet they have been ruled and oppressed by Saddam's Sunni Muslim Baath party for decades. Open friction between the two groups could seriously destabilize a post-Saddam Iraq. Meanwhile, in the north, Kurds may seize the opportunity to create a separate republic. If the U.S. doesn't want a splintered, Lebanon-ized Iraq, its troops will have to move in and quell Kurdish ambitions. Turkey, fearful of mass refugees storming its borders and of an independent Kurdish state being established next door, would demand that the U.S. take action.

None of that would play well in the Arab world. "A U.S. occupation becomes less popular the longer it lasts," says Chris Toensing, editor of the Middle East Report, a nonprofit quarterly publication. "It could certainly serve al-Qaida's interest, because the longer it lasts, the more it bolsters arguments in the Middle East that the war is really against Islam, it's about grabbing oil, and that the colonial West doesn't want Muslims to control their resources."

In other words, a war against Iraq, the stated goal of which is to battle terrorism, might simply fuel resentment and lead to more radical attacks against the U.S.

Terrorists have already signaled their intentions. "Any attack against Iraq will be answered by resistance everywhere, and American interests everywhere will be targeted," a senior leader of the radical Palestinian group Hamas warned last week at a pro-Saddam rally held in Gaza. "We say that all American targets will be open targets to every Muslim, Arab or Palestinian." On Monday, a gunman shot two Americans near a U.S. military base in Kuwait in what officials have labeled a terrorist attack.

Discussing Iraq with the Washington Post recently, French President Jacques Chirac warned that the Middle East's rampant resentment toward the West is "a ticking time bomb that will explode."

One flash point could be Pakistan. Since Sept. 11, Gen. Pervez Musharraf has walked a tightrope between cooperating with the U.S. and appeasing his population, 69 percent of whom have a negative opinion of America, according to a recent poll by the Pew Research Center. "If there is a high-profile occupation of Iraq, one government that could fall is Gen. Musharraf," says Voll. "The best-case scenario there would be chaos. The worst-case scenario would be an anti-American regime fully committed to opening war with India and liberating Kashmir." Both Pakistan and India have nuclear capabilities, Voll notes.

As for the often-stated goal of creating a democratic Iraq, that too could go badly in unpredictable ways. If the Iraqis were given a genuine voice in a post-Saddam government, the majority might vote to elect a Shiite ayatollah as their leader, who might promptly sign a mutual defense pact with the Shiite majority in Tehran. For decades, Washington has worked from the assumption that America's best interest lies in those two Shiite nations not becoming allies, since it was the Shiites in Iran who launched the Islamic revolution during the late 1970s and overthrew America's longtime ally, the shah.

And then there's the oil. Former CIA analyst Robert Ebel suggests in a worst-case war scenario, the price of oil could jump to $80 a barrel. The current price, already at a two-year high, is $32. Even if the sky-high rates held only for a couple of months, they could wreak havoc on America's already struggling economy.

Still, with the United States' extraordinary advantage in resources, most observers assume the war is likely to go according to script: Faced with an overwhelming show of U.S. force, Saddam's regime collapses in a matter of weeks, if not days.

But war is chaos; inevitably, things go wrong. And Pike thinks people need to at least ponder those possibilities. "I think Americans are practically in denial about what it would look like if this war went badly," he says.