"The Time of Our Singing" by Richard Powers

In his dazzling new novel, America's preeminent novelist of ideas creates characters as compelling as his concepts. 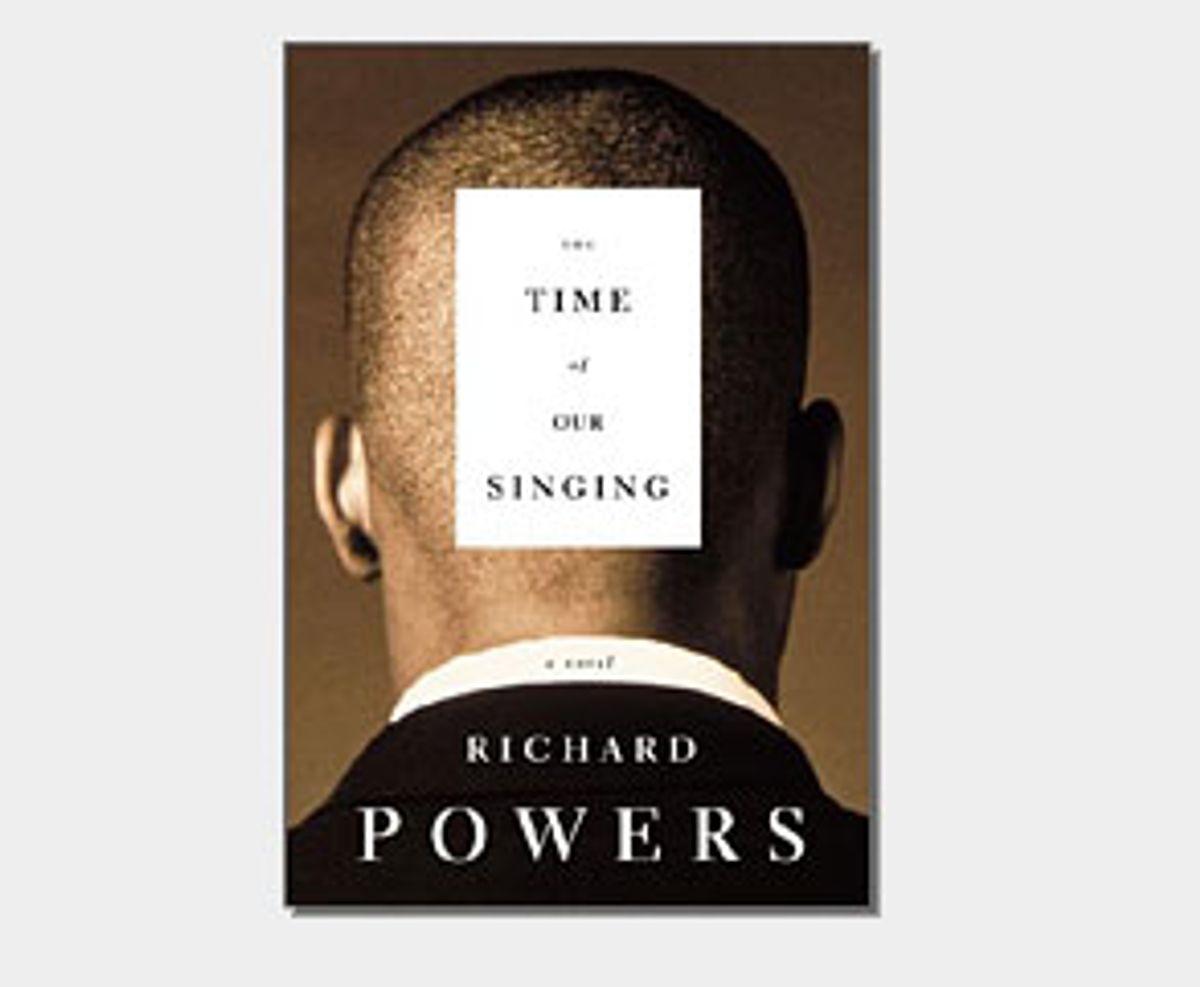 Now that writing novels of ideas has come back into fashion, it would be helpful if everyone remembered the following: To be good at this, you must 1) be able to write a novel and 2) have some ideas. It's dismaying how even some of the most revered practitioners of the form aren't particularly adept at either one. Perhaps they're hoping that the razzle-dazzle of Big Themes, bravura prose and the kind of restless and panoramic point of view that gets called "ambitious" will disguise their inadequacies when it comes to the fundamentals.

Richard Powers is certainly not one of those artful dodgers, any more than he is a trend-sniffing latecomer to the form -- it's in his blood, and at times he seems like the only writer capable of taking the novel into fresh territory without also being a crashing bore. No one can doubt that Powers is not only wicked smart but also able to capture in fiction the giddy thrills of being smart. But even his most devoted admirers must admit that the novel part of the task -- characters, story, place -- has been harder for him to pull off. Powers, when you get right down to it, is more interested in processes and patterns than in people, but when he hits on the right combination of ideas, as he does in his newest book, "The Time of Our Singing," he finds a place for people in his celestial clockwork.

"The Time of Our Singing" is about two things, race and music, and their connection to a third thing: time. Music can't exist without time, while race is in the process of being destroyed by time, as exemplified by the marriage of Delia Daley, an African-American, and David Strom, a German-Jewish immigrant, and the lives of their three children, Jonah, Joseph and Ruth.

The couple meet at Marian Anderson's historic 1939 concert on the steps of the Lincoln Memorial. (The contralto had been barred from singing at Washington, D.C.'s Constitution Hall because she was black.) Jonah, their oldest son, is a musical prodigy with a voice that can "bring down a little corner of eternity unto earth." Joseph gets caught in the slipstream of Jonah's career, becoming his accompanist on the piano and his traveling companion on the recital circuit. The youngest sibling, Ruth -- her faith in the utopian bubble of her family as a sanctuary where "nobody's anything but their own" is poisoned by her mother's death in a fire -- joins the Black Panthers.

Character and story drive most good novels, while theme makes a satisfying byproduct, but for Powers the idea is the engine that makes everything go. His method is to fashion a palace out of a spacious metaphor, then to use the experiences of his characters to explore every room. In "The Goldbug Variations" he set Bach's series of keyboard variations against the blossoming science of genetics, another way of contemplating the miracle of infinite iteration (the "Goldbug" refers to Poe's mystery story, and code, and the geneticist as detective). In "Plowing the Dark" he juxtaposed the blank slate confronting a team of virtual reality designers to the blank nightmare world inhabited by a hostage kept blindfolded for months.

This method may sound cold-blooded, but the wonder and passion Powers brings to elaborating his metaphysical conceits (to use the technical term) make his books more than merely cerebral. His closest literary relative isn't another novelist or even a prose writer but the 17th century English poet John Donne, who would weave a cat's cradle of connections between two seemingly dissimilar notions, then invert the construct and in doing so make you see both things in revelatory new ways. The Renaissance mind envisioned existence as composed of patterned overlays, all harmonizing, glossing and expanding on each other, all speaking of the divine mind. Donne wrote great religious poetry and sermons, and while Powers' work remains steadfastly secular, the two writers share a rapturous delight in the workings of the universe. It's not just that Powers finds ideas fascinating; he finds them beautiful. He writes novels, rather than nonfiction, because the only way to speak of that beauty is through art.

Race makes the ideal theme for Powers because it exists only as an idea; scientifically, any variation between the races is insignificant. Yet for all its insubstantiality, race is an immense weight on the lives of the people who shoulder its stigma. The Strom children are trapped between two ideas, black and white; nurtured on the idea that they can live "beyond race," they're forced to choose once they're thrust into the world outside their family. They're born too soon. Their parents, particularly their mother, want to will them into the future, when she is sure a life beyond race is possible. After all, someone has to do it first. In an ironic counterpoint, their father is a theoretical physicist who keeps insisting that time itself doesn't exist. He's right: Time is purely a matter of perspective and interpretation, but as with race you have to live through it anyway.

This is tricky territory, because Powers is not just a white man writing about race, but a white man writing about love between a white man and a black woman. When a mediocre novelist does this -- usually all fired up with the notion that he's being daring -- the results can be dire. The hero (a stand-in for the author, as is the case with most mediocre novelists) is supposedly defying both the cruelties of racism and the cant of political correctitude with his affair. At best that looks like a naive faith in the power of sex to change the world, and at its ugliest it looks like a way to turn getting laid into an act of magnanimity.

Powers, on the other hand, knows that it's not David and Delia's love that chips away at the bedrock of race, but the family they make of it, their light-skinned children, the vanguard of a world where "someday everyone will be brown." And he also knows that as long as the idea of race shapes our world, escape is a mirage. Joseph stands suspended between Jonah, a being possessed by the imperatives of his talent, and Ruth, who can't understand why her brothers don't see that if they don't choose to be black they are therefore deciding to be white. Joseph wants to believe that the sublimity of great classical music transcends race (Jonah, with the moral tunnel vision of genius, ignores such questions); Ruth argues that only a white person can afford to think that anything transcends race. She lives in the present while Joseph pretends to live in the future; however illusory time may be to a physicist, it is a seemingly unbridgeable gulf to an ordinary mortal.

And they are both right -- that is the perplexity that Powers' novel embraces. For the world to improve we have to disregard race, and for the world to improve we can't forget it either. The dilemma galvanizes Powers' gifts and spins some of his novelistic weaknesses into gold. Joseph is essentially the same character who's at the center of all Powers' novels -- passive, pining, chronically guilty and ashamed; the emotional range is pretty narrow -- but he's got better cause to be this way than some of Powers' other creations.

There is a sense that all Powers' protagonists, like film noir heroes, have suffered some incurable loss long before the story begins, that they stagger on only half alive, stabbed by recollections of a vanished happiness. "The Time of Our Singing" sharpens that sense; the central characters of all his novels mourn the loss of a warm, insular, preternaturally brilliant family -- whether they had one or not. ("Every sure thing was lost in the nightmare of growth," Joseph thinks.) They all feel like freaks and outsiders in ordinary society, as is the way with prodigies, but the Strom children, raised in an illusory colorblind paradise, have the best reason for it.

"The Time of Our Singing" has its flaws: It's longer than it needs to be, and Powers still has trouble writing plausible dialogue. But the novel's sturdy plot -- a good ol' family saga, of all things -- soldiers over the occasional rough spot, idles rarely, and offers its share of surprises. You don't exactly read "The Time of Our Singing" to find out what happens next -- that will never be the point of a Richard Powers novel -- but you care all the same, not just about the way this author opens up a universe of thought and makes you hear the legendary music of the spheres, but also about the fate of a few baffled human beings, muddling their way through to a life worth living.